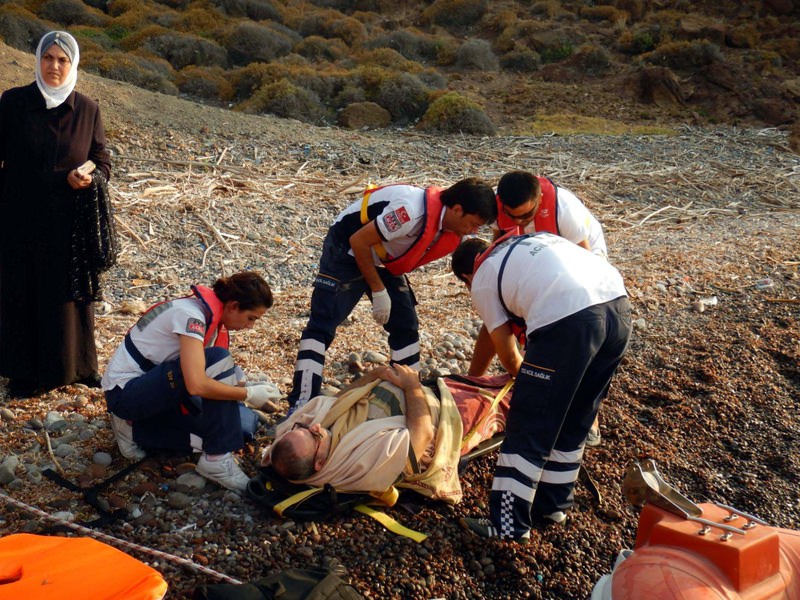 The association has a 35-member team. They take part in search and rescue activities in certain areas including Karabakla Point north of the Bodrum Peninsula and Orak Island on the south of the peninsula in cooperation with Coast Guard Command.
by Daily Sabah with AA
Oct 06, 2015 12:00 am

Volunteers of activists, doctors, divers and boat captains not working in the maritime trade established the Bodrum Sea Rescue Association in 2000 in order to respond to water emergencies. In light of the Syrian crisis, the organization has responded to approximately 1,500 emergencies so far

Founded in 2000 by volunteers in the southern province of Muğla to support search and rescue operations on the sea, the Bodrum Sea Rescue Association has made a name for itself thanks to its successful operations. Volunteers affiliated with the association continue their activities with the help of various agencies and institutes in order to stop marine accidents by attending to emergencies 24/7.

Volunteers actively work in coordination with the Bodrum Coast Guard Command and they are praised for their good work. Speaking to Anadolu Agency (AA), Bodrum Sea Rescue Association President Ömer Karacalar said the association supports Coast Guard Command during their search and rescue operations. Karacalar stressed that their aim is to be the first to respond to any injuries occurred around the Bodrum Peninsula, adding that they are conducting important projects as part of their mission.

Karacalar said they operate as the Coast Guard Command's authorized nongovernmental organization (NGO), and said: "We are working in collaboration with the Coast Guard, especially on the incidents regarding the increasing refugee situation. We are trying to be the first to respond to any incident and help people in emergency situations."

So far, the Bodrum Sea Rescue Association has responded to approximately 1,500 emergencies. The association works with volunteers, including Underwater Offence Group officers, doctors, divers and boat captains not working in maritime trade. The volunteers also take the injured people that they rescue to the nearest hospitals. Karacalar said saving a person's life means so much to them. He added that they are trying to keep the association working with the help of other agencies and institutions, and continued: "Our doors are always open to those who want to offer us help. Our needs, such as boats, ambulances and medical equipment, are met by several institutions. We are also working hand-in-hand with the Muğla Health Directorate and National Medical Rescue Teams (UMKE). However, the equipment that we use quickly becomes outdated. Such equipment needs to be renewed and modernized in time. We would appreciate if people help us with that."

One of the recordings showed a boat that sunk along the Bodrum-Kos route, leading to the death of six people. Divers found three people in an air chamber that formed in the front of the boat, while some divers from the association to save a child, yet the child did not want to leave his father. Medical teams and boats from Coast Guard Command arrived at the scene of the accident. The three people were rescued and brought to the hospital accompanied by medical teams. In another video taken on May 23, a boat sunk and volunteer divers found a 3-year-old girl under a sunken boat along the Bodrum-Kos route. The girl was found five hours after the boat sank. Divers saved the girl and she was hospitalized at Bodrum State Hospital by the Coast Guard. One video witnesses a tragic story of a Syrian family waiting on Aspat Island to go to Kos. Some Syrian refugees tried to travel to Kos from Bodrum a couple of times but failed. In their last escape, one of the family members became ill. The association helped the family and following initial medical response, the refugee was taken to the hospital.