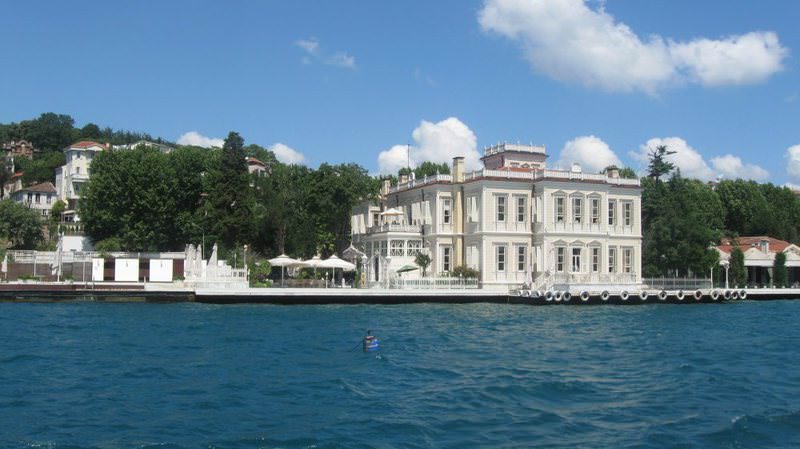 Said Halim Pasha Mansion was built in the last quarter of the 19th century in Yeniku00f6y. The mansion takes its name after the grandson of Muhammad Ali of Egypt and former Grand Vizier Said Halim Pasha.
by Anadolu Agency
Oct 13, 2015 12:00 am

Situated on the shores of both sides of the Bosporus, nearly 600 historic mansions in Istanbul contribute to the city's cultural heritage. A new book that aims to reveal this heritage contains hundreds of these historic mansions and their stories

Istanbul's historic mansions, known as the "Pearls of Bosporus," have a significant role in the city's cultural heritage because of their architecture and, more importantly, their stories.

In his book, Şimşek mentions historic mansions in the districts of Eminönü and Sarıyer on the European side and from the districts of Üsküdar and Beykoz on the Asian side. At the time of the Ottoman Empire, most of these mansions were waterfront mansions. The book says that the historic mansions of Istanbul had two separate buildings, the "harem" reserved for women and "selamlık" reserved for men. Guests were mostly hosted in the men's section. The mansions also feature other sections including curtilages, barns, cart houses, boat houses, cellars, a kind of pergola where a household could enjoys the moon light and servants' quarters. Some mansions had panels with "Ya Hafız" written on them, referring to one of the names of God meaning "protector." These words were written under the mansion's medallions and were believed to protect the building from the evil eye, witchcraft and disasters like fire. Şimşek said that these words can be seen on the Said Halim Pasha Mansion as well as the Emine Valide Pasha Mansion, which is currently used as the Egyptian Consulate.

Şimşek further said that a group of guards named "bostancıbaşı" were responsible for security and regulation along the Bosporus in the Ottoman period. In those years, the mansions of Muslims had three floors at most, while non-Muslims' mansions were required to have one or two floors. Different colors also used to indicate the status of mansion owners. Red mansions designated statesmen or someone from the palace. Hekimbaşı Mansion or Sadullah Pasha Mansion can be given as examples of this category. 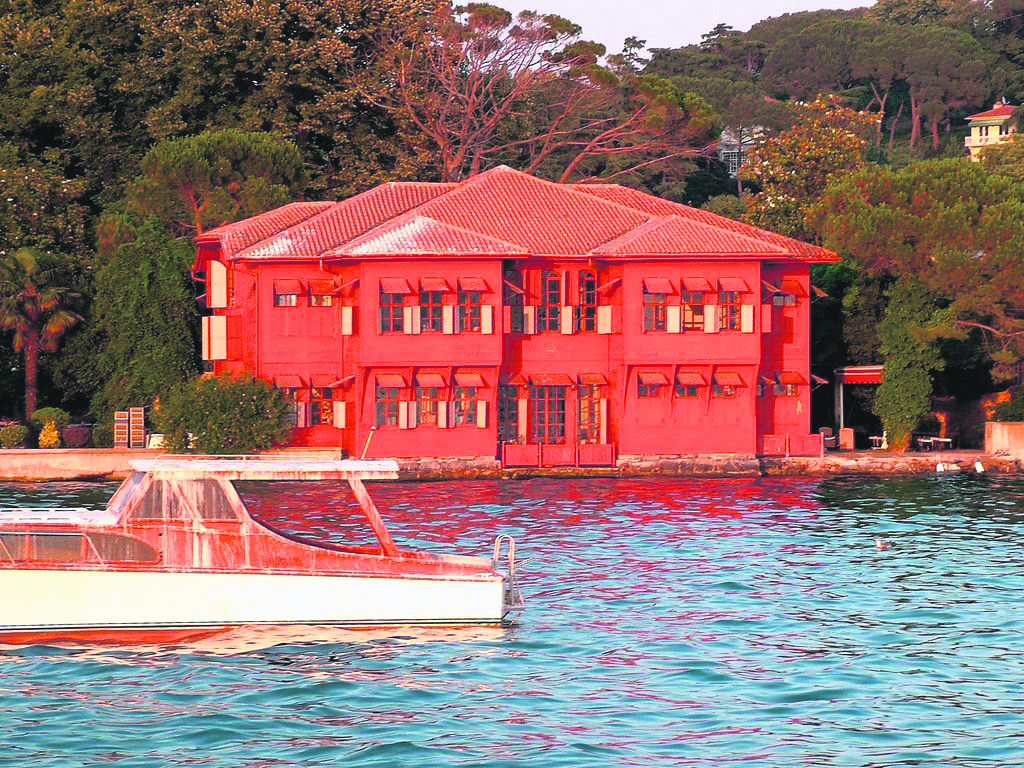 If a mansion is light blue, pink, green or white, then it would mean that a Muslim family lived in it. Mansions in grey, brown or smoky colors belonged to non-Muslim families. If anyone violated this regulation, then his mansion was seized and the owner was exiled. The mansion remained closed until the punishment ended and nobody could live in it. Şimşek said that this practice allowed other residents to understand whose mansion has been fined.

The book further says that neighborhoods were shared among the palace members and statesmen. Princes, sultans and other family members lived in the coastal areas like Beşiktaş, Ortaköy and Kuruçeşme. Grand viziers, viziers and other members of the Ottoman court lived in Bebek while scholars lived in Rumelihisarı. Non-Muslim groups settled in Kuzguncuk and religious men, authors, poets and scientists lived in Beylerbeyi. In his book, Şimşek says there are 600 mansions along the Bosporus, 366 of which are historic. These historic mansions are under the protection of the Directorate of Monuments. 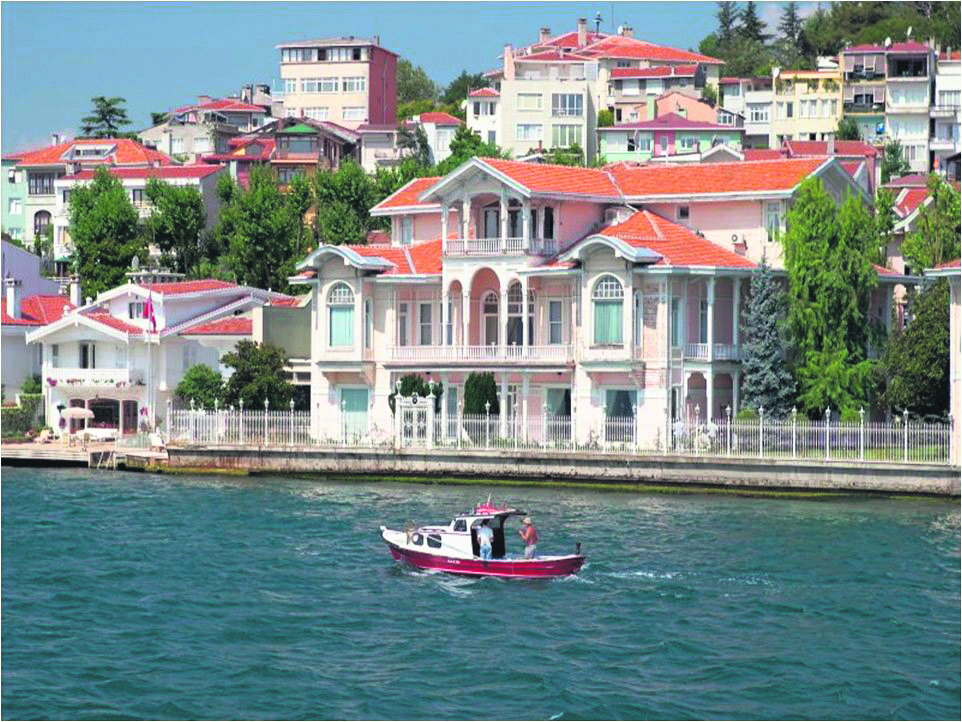 Shazade Burhaneddin Efendi Mansion is the most expensive mansion on the Bosporus. It was sold to a Qatari princess for 100 million euros in July. Sultan Abdülhamid II named the mansion after his beloved son Burhaneddin Efendi. The Burhaniye neighborhood takes its name from Burhaneddin Efendi as well. The mansion has two separate buildings along with a ball room, a pool, a boat house, a Turkish bath, a giant kitchen, sports hall, 64 rooms and curtilage as well as a laundry. Amcazade Hüseyin Pasha Mansion was the oldest mansion, built in 1697. Located in the Anatolian Fortress area, the over 300-year-old mansion has not survived to the present day, except for one room. Şimşek said that it was a 24-room mansion with a fabulous view. Amcazade Hüseyin Pasha served as grand vizier and chief admiral. "He was one of the few people that knew about the Bosporus very well and the mansion's location is therefore perfect. Today, a room in the selamlık section can be seen and it is under restoration. The biggest mansion is Emine Valide Pasha. The 48-room mansion's deck is 76 meters long," Şimşek said. Emine Valide Pasha Mansion has an interesting story, Şimşek said. "Emine Valide Pasha, the mother of Khedive Abbas Hilmi Pasha of Egypt, was the only woman called with the title pasha in the Ottoman Empire. When the republic was founded, she wanted to donate her mansion to the state, but she later canceled her decision as the officials did not use her title in official correspondences," Şimşek said.

Said Halim Pasha Mansion was built in the last quarter of the 19th century in Yeniköy. The mansion takes its name after the grandson of Muhammad Ali of Egypt and former Grand Vizier Said Halim Pasha. The mansion hosted Ottoman and German statesmen who concluded the 1915 Ottoman and German alliance agreement, leading the Ottoman Empire to enter World War I. "The agreement was signed on a rainy day in this mansion. The house is also called 'the mansion with lions,' as there are two lion sculptures in the garden," he said. After Said Halim Pasha died, his sons Halim and Ömer continued to live there for a while. The mansion was then rented by Arabs as a summer house. Saudi King Faisal lived in the mansion as well. The mansion's outside sections, most of which were kitchens, have now been turned into shops. On their doors, Said Halim Pasha ordered to write: "Aç olan buyursun" (Those who are hungry can come in). Said Halim Pasha Mansion is now a popular venue for weddings, meetings and organizations.