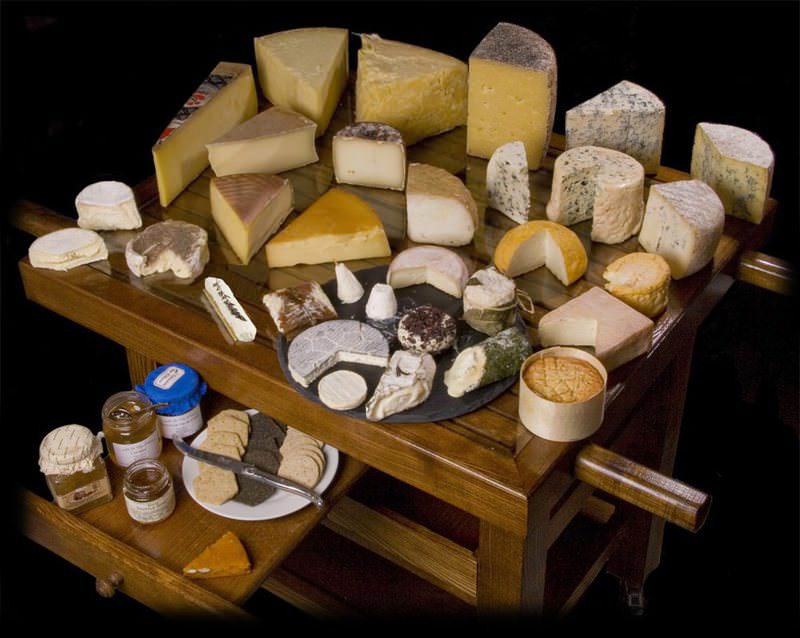 Even though Turkey is not usually considered successful at commercializing cheese, Turkish cuisine offers just as good of a selection as other countries and has a variety of cheeses thanks to its proximity to Rumelia and the Caucasus, the homeland of dairy products, and the Middle East

Cheese is a dairy product produced through the coagulation of milk, mostly with the help of the fermentation process. However, in certain regions, milk is left to ferment by itself. In villages, the fermentation process is prepared from plants and calves' abomasum. Indeed, cheese saves the life of easily perishable milk. Just one part of cheese is made from ten parts of milk. In the past, the basket in which curdled milk was filtered to make the cheese was called "formos." The French tradition of "un peu fromage," eating cheese after the main course, originated from the East.

France is known for its many varieties of cheese, followed by the Netherlands, Italy and Switzerland. There was a well-known shop on a street in Paris infamous for its bad smell. The shop only sells cheese and the owner used to say, "The best cheese smells the worst."

When it comes to cheese, Turkish cuisine offers just as good of a selection as other countries. However, as it known for other things, it has failed to sell its cheese. Turkish cuisine has a variety of cheese thanks to its proximity to Rumelia and the Caucasus, the homeland of dairy products, and the Middle East. In small towns and villages, you can come across separate cheese markets with dozens of cheese varieties even in the most basic shops. In Trabzon's famous "Karılar Pazarı" (Women's Market), 25 different varieties of cheese is sold.

Cheese made of raw milk is highly desirable, yet was once prohibited in Europe. In general, pasteurized milk and cheese made of pasteurized milk are the only available dairy products that are sold. At the time of the Ottoman Empire, cheese was brought from Bucharest, Varna and the Black Sea to the imperial capital of Istanbul. Round cheese and Tulum cheese were popular as well. The most desirable types of white cheese were Ezine cheese, from the Ezine district of the Çanakkale province, and sheep's cheese made by Debre villagers living in Macedonia. Cattle and goats are distinctive in each region, and their meadow and grazing place is also different. Fermentation techniques also vary between regions and this is because cheese has different variations.

White cheese produced in Edirne and now mostly in the Ezine, is made of sheep, goat or cow milk based on the season. Sheep's milk gives cheese a yellowish color, mild softness and good smell. Nowadays, goat milk is added to make it white and firm. The air, water and grass of the Kaz Mountains near Ezine give a unique taste to the cheese as well. Some cheese made in other regions is also called Ezine cheese, but they are not the same.

In the past, Tulum cheese was fermented in a goatskin casing called a "tulum" or a large jar and was left to sit in cold inns or warehouses. Today, the tulum has been replaced with a plastic bin. Tulum cheese, generally known as Shawaqi cheese (Şavak in Turkish), is produced in Erzincan's mountainous villages and is very sought after as it is made of cow's milk, is white and spotless, and it does not have a bitter taste. It has medium toughness and does not easily crumble. With a porous appearance, İzmir (Tire) Tulum cheese is made of a mix of cow, goat and sheep's milk, while Ayvalık Tulum Cheese is fermented in tins. Salt water is added and the cheese is stored in the cold.

Dil cheese (meaning tongue in Turkish) is aptly named as its slices are reminiscent of a tongue. The cheese, which can easily be torn apart, is produced from cow's milk around the cities of Bursa and Bilecik. Dil cheese is low in salt and you can smell and taste the milk while eating it. This type of cheese suits pizza, however, it goes bad very quickly. On the other hand, Erzurum's chechil (çeçil in Turkish), which is a type of string cheese, is produced with non-fat milk. It is salty, unravels when it is rubbed and is best served with butter and eggs.

Kashar (kaşar in Turkish) cheese is produced from ewe's milk in Kars, Erzurum, Muş, Tekirdağ and Kırklareli. It is a pale yellow cheese with spices. It first becomes moldy but then is cleaned. If its surface is covered with mold, it is a sign of high-quality cheese. Although it is usually served for breakfast, it also goes with meals cooked in the oven. Kashar cheese, which is kept and rested for four or five months, is called aged kashar (eski kaşar) cheese.

Russian tsars brought cheese connoisseurs from Switzerland and established dairy farms in the Caucasus. The Qarapapaqs were the masters of producing Kars cheese. As Kars was under the reign of Russia for 50 years, Kars' kashar cheese became famous. The world-renowned cheese that is produced in Switzerland's town of Gruyere can also be produced in Kars. Gruyere cheese from Kars is made of cow's milk. Each piece of Kars Gruyere has nut-sized pinholes. While its exterior is dark yellow in color, the inside is pale yellow. Moreover, while it resembles French cheese, it tastes like emmental cheese from Switzerland. Although 24 different types of cheese used to be produced in Kars, most of them have long been forgotten. Artvin gruyere features pinholes and is darker in color than Kars gruyere. Artvin gruyere also suits meals.

Circassian cheese (Çerkez in Turkish) is both made from ewe and goat milks, and it is best produced in Düzce and Hendek. It is low in salt, pale yellow and it does not feature holes. When it is eaten, Circassian cheese makes a sound that resembles an elastic band in your mouth. A smoked variety of Circassian cheese is also produced and sold. The exterior of smoked Circassian cheese is brown and it is thin shelled with a rich smoky taste. The plaited cheese of Diyarbakir is similar to Circassian cheese. The production process of plaited cheese requires a lot of work. The salt-free cheese, which is made of cow's milk, is boiled in salty water for a period of time. Halloumi cheese from Cyprus is made of boiled goat's milk. It is hard and salty. The mint that is added to the cheese while producing it gives its unique flavor. Ayvalık's kelle, Çankırı's küpecik, Serefihisar's armola, Tire' çamur, Rumelia's kaşkaval, İstanköy's işkembe and Varna's tekerlek cheeses offer people various flavors and tastes as well.

There were also people in history who were famous for their detestation for cheese. One of these people was Grand Vizier Rashid Pasha. Some people did not eat cheese just to win his favor. Allegedly, following a banquet and in order to tease Rashid Pasha, somebody spoke about a well-known foreign affairs usher, Kamil Bey, who was also known as "Mahşer Midillisi" (Doomsday Pony) and was said to have loved cheese. Pasha turned to Kamil Bey and asked if it was true or not. When Kamil Bey understood that things were getting serious, he said: "My pasha, such questions are not asked to me. I eat whatever I find." Historian İbn al-Amin Mahmud Kemal İnal also did not like cheese and called it "milk's bastard."
Last Update: Oct 16, 2015 2:16 am