Ashura: The traditional dessert embracing people from every religion 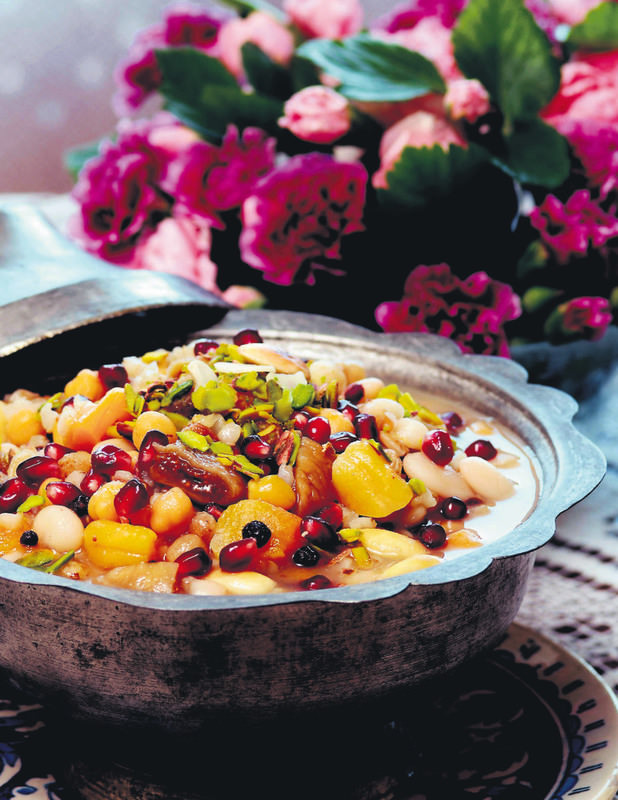 There are days in history on which many well – known incidents occurred, such as today. Ashura, the 10th day of Muharram, the first month of the Islamic calendar, is one of those days. Ashura means 10th day in Semitic languages, and the customary dessert prepared on this day is also called ashura. Today, Oct. 23, is the Day of Ashura

Islamic sources recount this day as the day when Prophets were relieved from all their distress. It is said that on the Day of Ashura God forgave Adam, Noah's Ark rested on dry land, Jonah got out from the belly of the whale, Abraham survived the fire of King Nemrut, Idris ascended to the sky, Jacob finally could see when he reunited with his son Joseph, Joseph came out from the pit, Job recovered from illness, Moses passed through the Red Sea and Pharaoh drowned, and Jesus was born and rose to heaven. Hence, the Day of Ashura is very important in Islam.

When Prophet Muhammad was in Medina, he saw that Jews were fasting. He asked the reason for their fast and they said: "God saved the Israelites from their enemies on this day. To show his gratitude, Moses fasted on that day." Upon this answer, Prophet Muhammad said: "I am worthy of doing the same thing that my brother Moses did," and fasted. Until fasting was made obligatory in Ramadan, Muslims fasted on this day. Afterwards, fasting on the Day of Ashura became a Sunnah tradition.

The Day of Ashura is also the day when the prophet's grandson Hussein ibn Ali was martyred in Karbala by the government's forces on his way to Iraq as he was believed to be attempting a rebellion. As the men who invited him to their lands and ran away without helping him, Iraqi people mourned Ali on the Day of Ashura. This tradition is still alive among Shiites in Iraq and Iran, however mourning is not a part of Islam. If it had been so, Muslims would have mourned Prophet Muhammad's death. These kinds of ceremonies cannot be found among Sunnis, who represent the majority of Muslims in the world. Orientalists talked about the Shiite ceremonies, which shocked them, with great enthusiasm, leading to the image of Muslims as people who whip and bleed themselves in grief.

In the Ottoman society, each dessert had a certain day. One of the characteristics of the 10th day of the Muharram is cooking ashura. As legend has it, the survivors of Noah's Ark mixed some cereal and dried fruit that was left in the storage and cooked this dessert. Hence, almost every community that has ashura cooks it similar to each other. People try to add seven different ingredients at least. Coarsely ground wheat, chickpeas, beans, rice, apricots, grapes, berries, plums, figs, peanuts, orange peel and apples or pears are added into ashura. Ashura is decorated with pomegranate seeds, currants, walnuts, almonds, hazelnuts and cinnamon.

The dessert was traditionally distributed to neighbours, at least to seven homes. Some numbers, like 7 as a prime number, are believed to have special meanings. A week has seven days and it is believed that the earth, the heavens and hell have seven levels. During the hajj, pilgrims circumambulate the Kaaba seven times. Again in the hajj, the ritual of stoning the devil is practiced by throwing seven stones.

Cooking ashura is not a part of Islam, but it is tradition. On the Day of Ashura, Muslims observe the tradition of making ashura, as Prophet Muhammad said: "Those who show abundance to his children's living on the Day of Ashura, his livelihood will be abundant the whole year." It is because of that ashura includes many different ingredients.

Non-Muslim citizens of the Ottoman Empire also used to make ashura. Greeks call ashura "koliva" and make plenty of it in the first month of the New Year. Compared to Turks, they include nuts instead of legumes. Like halva, they make ashura after someone's death and distribute it at the cemetery. They also respect the boiled water and the crumbs of nuts and throw them into the sea. Turkish Cypriots adapted the word "koliva" as "golifa" in their dialect. Moreover there is a saying: "to distribute something like golifa" meaning "giving generously". When someone wastes something, they say: "Did you think it was Golifa?"

Armenian ashura is like that of Greeks, but call it "anush-abur," which means sweet soup.On Dec. 13, "cuccia," a dessert similar to ashura is made to mark Saint Lucy's Day. The same dessert is frequently called "mesciua" in Italy's Liguria region.

Alevis, one of the heretic societies in Anatolia, practice "12 imam fasting" observed in the first 12 days of Muharram. The 12 imams were the saints from the family of Ali, the cousin and son-in-law of Prophet Muhammad, and regarded as innocents by Shiites. To observe this kind of fasting, it is forbidden to have "sahur" – the meal eaten before fasting during the night– drink water and eat meat and meat products. The fasting continues until the stars appear on its last night. Ashura is made from at least 12 ingredients on the last day.

In certain areas of Anatolia, ashura is more liquid and is called ashura soup. It is made in large boilers and distributed to everyone. Ashura soup is very nutritious and delicious, but is difficult to cook. The ingredients need to be cooked for different amounts of time and separately. It is necessary to stir it in a proper way as well. Sugar is added in the last phase and then it is cooked a little more. It is then served in cups. If excessive sugar is added it will be too sweet, and if sugar is insufficient, its taste will not be as desired. Other ingredients like wheat, beans and chickpeas should be cooked well because they might not be completely cooked and ruin the dessert's taste. They should not be overcooked either. The taste changes if any ingredient is missing. As there are more working women in modern societies, so it has become more difficult to make ashura. Today, ready-made ashura is also available.
Last Update: Oct 24, 2015 5:30 pm
RELATED TOPICS