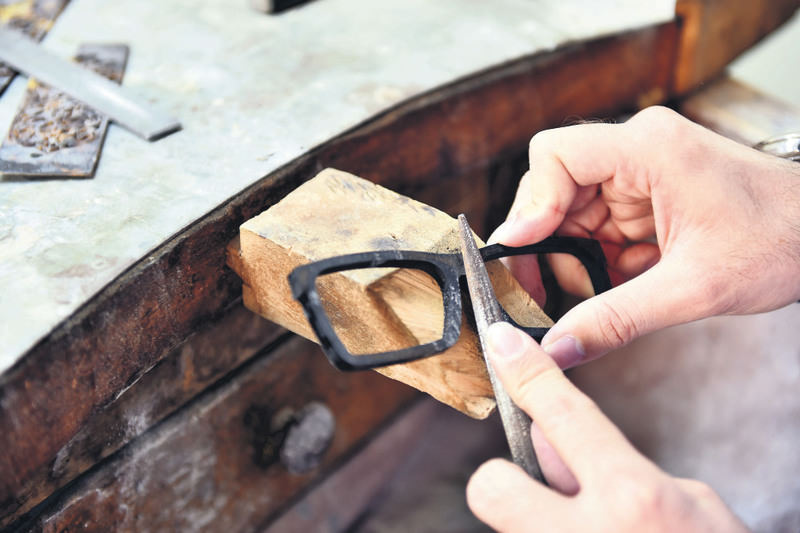 The handmade glasses are made from turtle's shell, water buffalo horn and other materials, and customized exclusively.
by Damla Kayayerli Oct 27, 2015 12:00 am

My colleagues and I recently visited the Büyükvalide Inn, which was built in the 16th century on the orders of Kösem Sultan, consort and wife of the Ottoman Sultan Ahmed I. Today, some rooms of the historical inn are used for storage, while some of them are operating as workshops for artisans and craftsmen. As we moved through the dark, narrow corridors of the historical inn it was as if we were traveling back in time. We made our way up to the third floor with the hopes of finding the workshop where two artists make custom-made glasses. When we stepped inside the workshop, which was only big enough to fit in two tables, we took a step from the darkness into the light. The outstanding Bosporus view shines light on the artistic work that is being done at the workshop, which has a counter and drawing table inside. Two friends, muralist Hanifi Özbek and mother-of-pearl inlay maker Nuh Miral, opened their workshop, N-H Workshop, about a year ago.

Özbek, 36, is a man who grew up in the warm atmosphere and culture of the neighborhood of Vefa in Istanbul; hence, he had many mentors growing up. As he was interested in calligraphy, he became a muralist. After receiving his bachelor's degree from the Department of Tile at Uludağ University in Bursa, Özbek learned the art from one of the last muralists at Topkapı Palace. He has also contributed murals to Süleymaniye Mosque, Galata Mawlavi House, Yenikapı Mawlavi House, the General Consulate of Egypt in Turkey and Topkapı Palace.

Miral, 33, has been working as a mother-of-pearl inlay maker for the last 18 years. He participated in the renovations of the Mausoleum of Abdülhamid I, the doors of Süleymaniye, the Kanuni Sultan Süleyman Inn and the Hürrem Sultan Inn, as well as the Topkapı Palace.

When the two artists met at Topkapı Palace three years ago during its restoration, they began searching for a new way for them to practice their profession. They began to think about creative ideas to take their minds off the daily chaos of urban life, and made rings and handmade badges as a result. "At first, we began working on accessories," Miral said. The idea of making custom-made glasses emerged later. Özbek began drawing original spectacle designs and Miral went out turtle shell hunting at antique shops. Miral took the idea from the shell on antique furniture, as it was fashionable to use turtle shells on furniture and prayer beads during the Ottoman era. "After finishing the design and drawing the glasses, we mold the glasses out of the turtle shell with fretsaw," Özbek said, offering insight about the production process. "We tried making handmade glasses from the horns of water buffalo and rams, and we succeeded at it. We are making custom-made glasses from various materials, including gold and silver," Özbek said.

Following the opening of their workshop, the duo was noticed by a Paris-based company that produces handmade eyewear. Adding that they have even received an order from the United States, Özbek said, "We are new in this business! We are designing the glasses according to the customers' wishes. It takes us roughly a month to finish a pair. Apart from sunglasses, we are also producing handmade optic glasses." Özbek said their customers mostly want them to write their initials on the spectacles. "We are creating one-of-a- kind products, but it is not well known in Turkey. However, custom-made products seem to be a rising trend in our country as well," he added. The price of the spectacles varies from TL 2,000 ($692) to TL 6,000 ($2,074) according to the materials that are used in the production.
RELATED TOPICS