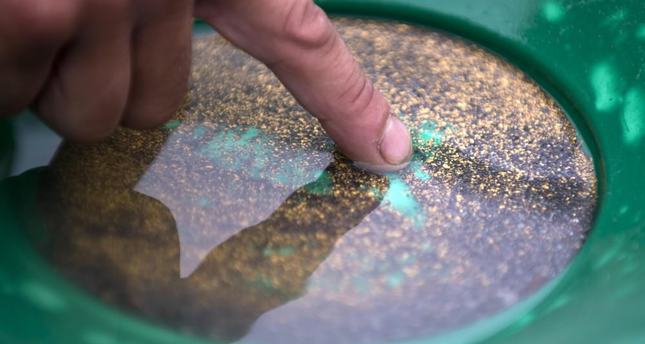 A man pointing to pieces of alluvial gold in a pan of sand from the Tundzha River near Kazanlak, central Bulgaria.

More than 2,000 years after the ancient Thracians crafted exquisite jewelry from gold deposits in what is now Bulgaria, hundreds are combing rivers again in the hope of striking it rich in the EU's poorest country

Around a dozen men and a woman stand knee-deep in the waters of the Tundzha River in central Bulgaria, bent over their green pans, they diligently wash the gravel looking for specks of gold. "This site must be rich if the Thracians chose it as their capital," 59-year-old Milka Ganeva said while sorting through stones with her husband near the Koprinka Dam. 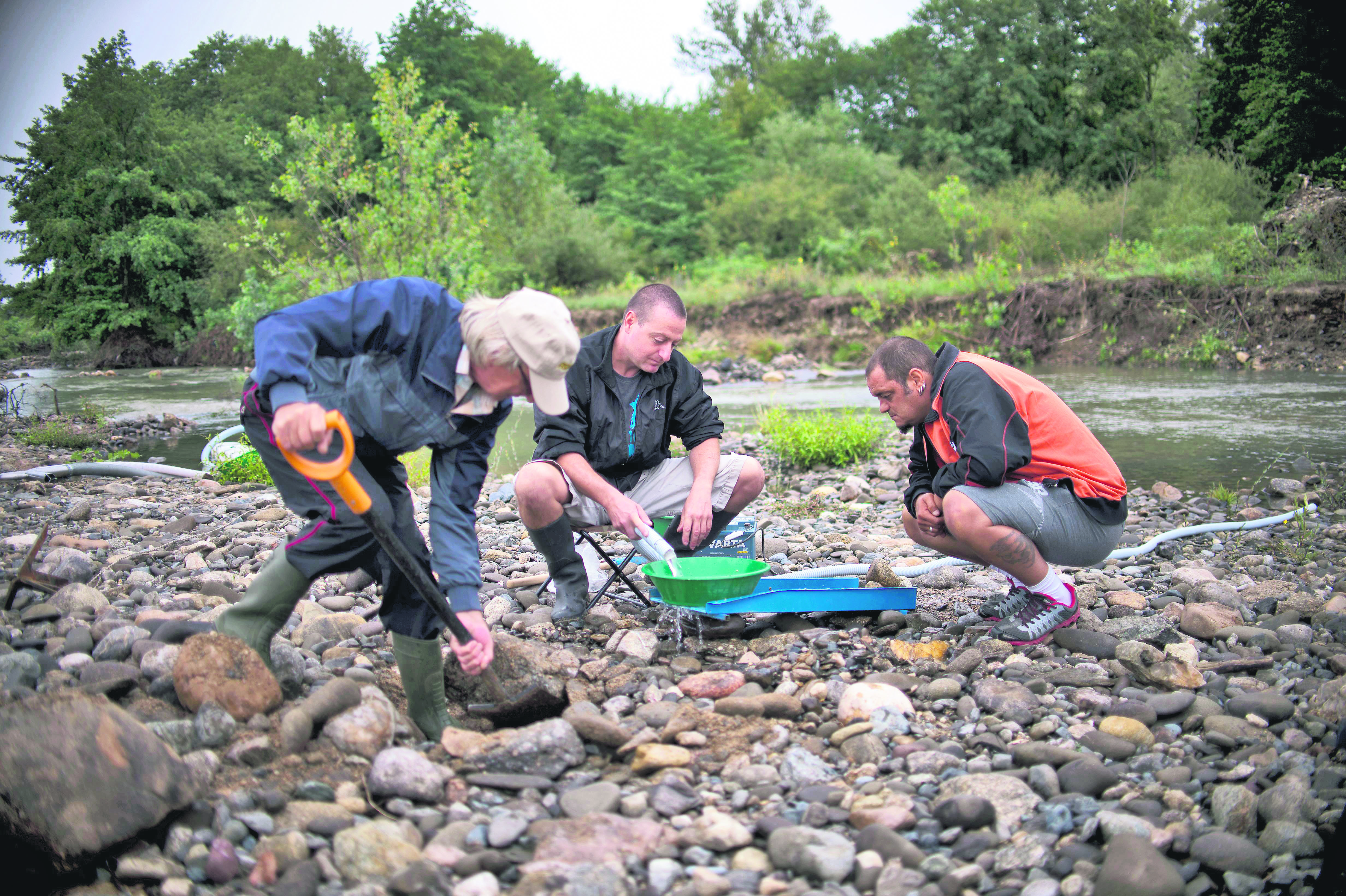 Three men who came to Tundzha River with the hope of finding gold sift sand.

Submerged under the waters of the gigantic reservoir built during the communist era are the ruins of Seuthopolis, the ancient capital of the Thracian civilization, famous for its gold jewelry and other elaborate objects fashioned from the plentiful deposits in the rivers. A legal pastime since 2009, an estimated 1,500 Bulgarians are currently practicing gold panning and even have their own association.

"The gold has always been there. It is not by chance that the region that is now Bulgaria was the cradle of Thracian civilization," association chief Kiril Stamenov, 52, told Agence France-Presse (AFP). He said the "the glitter of gold" now "attracts people, especially in a poor country," from all walks of life.

Options for indulging in the passion appear unlimited in the country. "Almost all Bulgarian rivers are gold-bearing," according to a government report published in August. Although not abundant enough to merit mining on an industrial scale, the eroding quartz veins in the rocks regularly release gold specs into the rivers.

"We come once a week and have only found 8 grams in two years. When we collect 20 grams we will make good luck amulets for our grandchildren," said Ganeva, who practices panning with her husband.

The pair even made their own equipment – a dredge with a sluice box powered by a car battery.

Some people have turned panning into a full-time occupation as they try to make a living in the European Union's poorest member state. "It's been two years since we got passionate about it and we haven't stopped doing it, all year round," said Nikolay Kostadinov, 31, who graduated from a mining school and is now "a full-time panner." His 28-year-old partner, Hristo Mavrudov, gave up pursuing tourism studies in college to devote more time to his hobby. "The gold fever is indescribable. You feel a rush of adrenaline when you see something glittering at the bottom of the pan," he said. The pair said they had collected around 70 grams of gold after combing a number of mountainous rivers across Bulgaria over the past year.

"Panners are largely enthusiasts. Those who start doing it with a view to get rich quit very soon. There are no rich panners," Stamenov said. The painstaking process involves hours of wading through rivers, digging and panning to find a spot, he explained. "Gold is 19 times heavier than water and harder to move along the curves of the river so we look in the gravel along the turns, near tree roots, under big stones or inside cracks in the rocks," Stamenov said. "We examine the specks under a magnifying glass. If they are rounded it means that the river has dragged them many kilometers. If they are sharper, the vein must be nearer," he explained. If from 1 cubic meter of gravel – corresponding to 400 shovels or 100 buckets – panners get 0.5 to 1 grams of gold, the vein is worth being explored.

For 50-year-old electrician Hristo Atanasov, the search matters more than getting lucky. "It is tiring if you put your mind to finding gold at any cost, but if you think about it as something that will help you forget the daily worries, it is a priceless pastime," he said.

Share on Facebook Share on Twitter
Previous in Feature With the global rise of the mobile gaming industry, the number of... Next in Feature The first election in the Ottoman Empire took place in 1840, which...
DAILY SABAH RECOMMENDS