A slip up or a principled stance 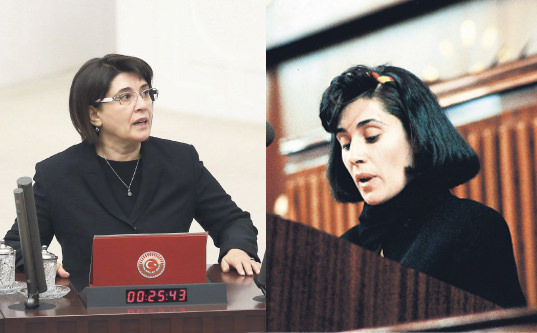 Member of Parliament Leyla Zana from the Peoples' Democratic Party misread the oath when she took it last Tuesday. Whether or not this was inadvertent, Zana's oath was not accepted and she was called to retake the oath. By not answering this call Zana has excluded herself from voting in Parliament at a time when the Kurdish question needs to be debated with sincerity

Last Tuesday, new members of parliament swore the oath of allegiance which is the precursor to their taking their seat in the Parliament. One HDP member of parliament uttered a sentence in Arabic before his oath, meaning "For brotherhood and peace among people." No one objected, no one protested. Leyla Zana, also from the HDP, uttered a sentence before her oath, this time in Kurdish, which meant "I am taking this oath for brotherhood between Turkish and Kurdish people."

This was not the first time that Zana had uttered such words. In 1991, when first elected to Parliament, she uttered the same sentence in Kurdish, while wearing a red, yellow and green headband, which she stated "symbolized the Kurdish flag." The parliamentarians in Parliament protested not only to her speaking Kurdish (which at that time was a forbidden language), but also to the headband.

This week there was no protest that parliamentarians spoke in Arabic or in Kurdish. Kurdish is now spoken freely in Turkey. However, it was what Zana did next that caused problems. Leyla Zana was supposed to use the oath that had been introduced in the 1982 constitution (this is abbreviated here): "I swear that I will protect the existence and independence of the state, the integrity of the nation ...that I will remain faithful to the unconditional sovereignty of the people, the superiority of the law, the democratic and secular state and the principles and reforms of Atatürk; ...that I will remain faithful to the Constitution....I swear this in front of the great Turkish people...."

The problem was that Zana did not say "the Turkish people;" rather she said "the people of Turkey."

This could have been a slip of the tongue. Zana herself said "it was probably a subconscious act," but she went to say "I stand by it." Zana did not misread it because she had forgotten the words. There is a card on the podium, which many parliamentarians read from; some even struggle to speak in Turkish, as their native language is Kurdish.

I get it. I get Zana's point. The Turkish people actually consist of people from a number of different nations; Kurdish, Alevi, Armenian, people who immigrated from the Balkans, from Greece, from Georgia and more recently from Afghanistan, Iraq and Syria; there are many more, far too many to mention here.

There probably should be a new oath for the Parliament, one that incorporates the idea of the "people of Turkey" rather than the "Turkish people." But this would require changing the constitution. Changing the constitution requires members of parliament participating in drafting, voting and confirming such changes.

Having come so far, having stood up to take the oath, to deprive oneself of the right to debate and vote seems futile.

Oaths of allegiance exist in almost every country, be they a republic or a kingdom. An oath of allegiance is when a citizen of a country swears loyalty to the monarch or the country. The United States of America requires an oath of allegiance to the constitution, while Canada, Australia and the U.K. require an oath to the queen.

There are examples of parliamentarians being elected, but refusing to swear the oath to allegiance. That is, they refused to take their seat in parliament. For example, the "Sinn Fein Policy" from 1905-07, meant that Irish parliamentarians who had been duly elected to Westminster abstained from taking the oath to the Queen, whom they did not recognize, but rather sat in a parallel parliament in Dublin. For them, this was not a tactic; that is, they were not abstaining to try to gain greater political power. Abstentionism was rather a principle; they would not swear allegiance to a sovereign they did not recognize.

The Northern Ireland Assembly (Stormont) was established after the Good Friday Agreement in 1998. Since this time members of parliament from Sinn Fein and other parties have taken their seats there. However, Sinn Fein members of parliament still refuse to take their seats in Westminster, although they stand for parliament, as they refuse to recognize the legitimacy of the British Parliament or its right to make laws for any part of Ireland, or the sovereignty of the Queen.

In 1999 Martin McGuinness, a Sinn Fein member of parliament, challenged the need to swear an oath of allegiance in the European Court of Human Rights. However, the court dismissed the case stating that this oath was "reasonably viewed as an affirmation of loyalty to the constitutional principles which support...the workings of representative democracy in the respondent State."

The multi-national nature of Turkey is similar to that in Spain, which sees itself as a "nation of nations." Many comparisons have been drawn between ETA, a Marxist-Leninist terrorist group, and the PKK. But there are other comparisons that can be drawn between Spain and Turkey.

The Spanish constitution perceives the Spanish nation as being the common and indivisible homeland of all Spaniards, integrated by nationalities and regions. The term nationalities refers to regions or autonomous communities that have a strong historical sense of identity, i.e. the Basque region or Catalonia. As part of this, there is a level of autonomy and devolution to the different regions; most Spanish citizens are content with this system.

However, in Catalonia there has been a peaceful move toward independence; several Catalan municipalities created the Association of Municipalities for Independence. This association consists of local organizations that want to further the national rights of Catalonia. Catalonia is campaigning for self-determination; as part of this, the region held a referendum in 2014. The referendum resulted in an 80.76 percent vote for independence; yet this must be taken with a grain of salt, as the turnout was only 37 percent. The referendum consisted of two questions: "Do you want Catalonia to become a State? " and "If so, do you want the State to be independent?"

Although the Spanish government stated that such a referendum was illegal and should not be held, the Catalan region went ahead with it. A "yes" vote did not mean that Catalonia would secede, but rather the leaders would have a platform from which they could negotiate for independence.

Would it be legal for Catalonia to secede from Spain? That is, could Catalonia and/or the Basque nation become truly independent without resorting to terror or war?

Under international law, any unilateral declaration of independence (or autonomy, for that matter), while perhaps satisfying the principle of "declarative theory of statehood", does not fulfill the "constitutive theory of statehood." That is, as made clear in other instances (for example, the Canadian Supreme Court's ruling on what Quebec needs to do to be independent), a unilateral declaration of independence is not valid in international law.

But, it is argued, the United Nations Charter enshrines the right to self-determination and the Universal Declaration of Human Rights guarantees the right to change nationality. So, cannot Catalonia, or Quebec, just decide that they are not Spanish or Canadian?

The answer is no. There is a list of "non-self-governing territories" (or non-autonomous territories). Neither Catalonia or Quebec appear on this list. Nor does a nation known as "Kurdistan" appear here. That is, these "nations" are not internationally recognized as nations, nor as regions that have the right to autonomy.

The Catalan parliament adopted the Declaration of the Initiation of the Process of Independence of Catalonia on Nov. 9, 2015. This was by no means a unanimous decision - 72 members voted in favor, but 63 voted against.

However, on Nov. 11, the Spanish prime minister threatened to suspend 21 politicians from Catalonia if they did not cease from pursuing independence.

As can be seen here, the road to independence is never easy. On Nov. 2, at a meeting at the Liberal Club in London, a representative of Turkish Kurdish groups stated that they were no longer seeking the establishment of an independent Kurdistan. This would be detrimental and divisive, he stated, as not everyone in the region was by any means Kurdish. There are Turks and Arabs living in the region as well; the region is made up of numerous tribes and "nations." To create a country where there had been no country before was only doing what had been done to the region after World War I. And it was this division that lay at the heart of so many problems today. Rather, someTurkish Kurds were seeking devolution or autonomy; that is they now want to remain part of Turkey, but to have some say in regional matters.

In order for such demands to be met, the Turkish constitution has to be re-drafted. The existing constitution is problematical in many ways, as can only be expected from a constitution drafted after a military coup d'etat.

To this end, as many members of parliament who are concerned directly with the question, be they of Kurdish, Turkish, Arab or other ethnicity, as possible should be involved to ensure the best possible agreement, thus preventing future problems.

Yet, for some reason, Leyla Zana has removed herself from the process. She did not refuse to take the oath, but "subconsciously" recited the oath in an unacceptable manner. When invited to reiterate the oath, she refused.

It is time that all politicians take up the Kurdish question with sincerity and dedication. Playing games on the podium is not the way to go. A protest statement, such as "I do not recognize the authority of this organization over my country" can have great impact. However, Leyla Zana did not do this. She clearly has a principled stance, but what happened in Parliament, was, in her own words, a "slip up." But her refusal to put it right has removed her from the sphere of influence. Her "slip up" is a one-day wonder. People will no longer talk about it next week. But her exclusion from Parliament will last until the next elections. What Leyla Zana did last Tuesday is a missed opportunity. Any missed opportunity is always a pity.
RELATED TOPICS