Standing up against the bullies 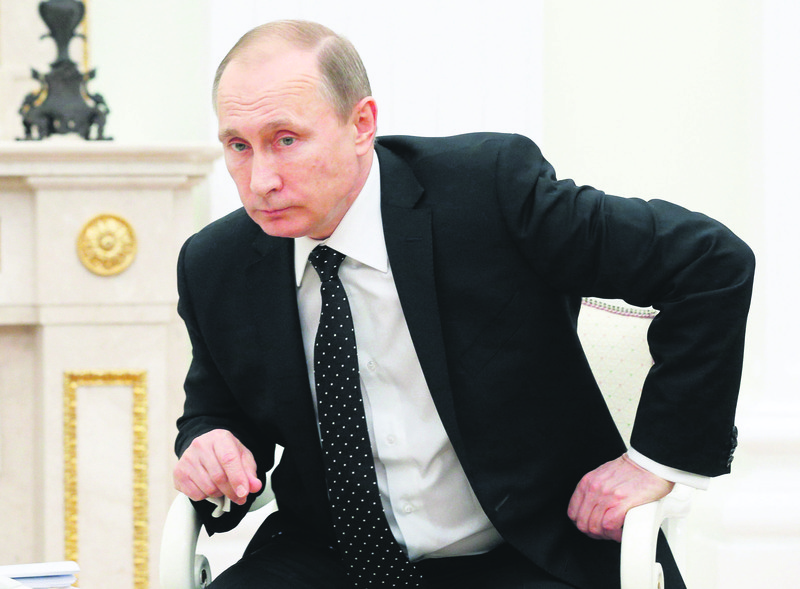 On Tuesday two Russian Su-24 fighter bombers were shot down over the Turkish-Syrian border, leading to tense relations between Russia and Turkey. But what happened was not a sudden or even unexpected event. The situation has been escalating and warnings have been given by Turkey, NATO and Western allies

After last Tuesday's worrying event in which two Russian Su-24 bombers were shot down over the Turkish-Syrian border the question as to why this happened has been frequently asked. Was this a hasty action by the Turkish government?

Immediately after the incident Turkish authorities stated that the Su-24 fighter bomber had ignored repeated warnings given over the course of five minutes; the planes were shot down after they had violated Turkish airspace near Yayladağı, Hatay. The important thing here is that no answer was received from the planes.. It was not possible to identify the planes as Russian; these were military planes flying in a war zone, directly threatening Turkey. As a result, they were shot down.

Although this is the first time that a NATO member has shot down a Russian plane since the Cold War, it was neither unexpected nor unjustified. What happened last Tuesday should be examined as part of a longer process; Putin's claim that Russia has been "stabbed in the back" has to be taken with a grain of salt. To quote Justin Bronk of the Royal United Services Institute: "Putin most likely knows that a routine provocation has, for once, been met with force and he has only his own policies to blame."

The most recent history of these events started in October of this year when Russian war planes violated Turkish airspace a number of times. When put to task about this by both Turkey and Nato the Russian authorities stated that the incursions had been an "accident" and that the pilots had not realized that they were in NATO airspace.

However, this is hardly credible. Modern combat aircraft like the Su-24s have sophisticated navigation systems. Any aircraft that the Russian air force sends to Syria will be sophisticated with highly trained pilots, simply due to fact that the terrain they are operating in is highly sensitive.

Such incidents have been referred to as "routine provocation." The events in October caused Turkey to state that it was losing patience with Russian violations of Turkish airspace. In response to the Russia's claim that the October incidents had been due to "error" the Secretary-General of NATO, Jens Stoltenberg stated that, "...this does not look like an accident." NATO also described earlier incidents as "extremely dangerous" and "unacceptable".

Russia does not deny these incursions in October; but more than merely flying into Turkish airspace, for over five minutes a Russian Su-30SM fighter locked its radar onto the Turkish F-16s that had been sent to intercept it; this was an aggressive action that is not in keeping with the accepted rules of engagement.

The official statement from NATO that was given after the October incident is as follows:

"Allies strongly protest these violations of Turkish sovereign airspace, and condemn these incursions into and violations of NATO airspace. Allies also note the extreme danger of such irresponsible behaviour. They call on the Russian Federation to cease and desist, and immediately explain these violations.

Allies call on the Russian side to take all necessary measures to ensure that such violations do not take place in the future.

The security of the Alliance is indivisible, and Allies stand in strong solidarity with Turkey. We will continue to follow the developments on the South-Eastern borders of NATO very closely."

During the October incidents NATO not only rejected that these violations were made by mistake; they stated that during this time Russia was sending more ground troops to Syria and building up its naval presence.

Great; Russia should be sending in troops to fight DAESH. This is what the joint action is all about. Fighting DAESH.

Yet, how ironic that Putin claims Turkey is stabbing Russia in the back, implying that Turkey is in cahoots with DAESH (nothing could be further from the truth, Turkey has resolutely been struggling against DAESH, bombing sites in concert with the U.S., arresting and/or deporting people who are thought to be trying to support DAESH, as well as trying to protect their border with Syria, which is nearly 1,000 kilometers long), while Russia is "heroically struggling" against DAESH.

If this were the case, why then is Russia bombing Bayırbucak, an area devoid of DAESH, but filled with Turkmens who are fighting Syrian President Bashar Assad?

If the fighters in Bayırbucak who are posed against Assad are eliminated, one more vacuum will appear in the region. And working from past experiences, when there is a vacuum in the Middle East it will immediately be filled by DAESH. Russia's bombing enterprises along the Syrian side of the Turkish border are not helping the coalition to fight DAESH, but rather promoting their own agenda; bolstering Assad.

Indeed, the U.S., Britain and members of the international coalition fighting DAESH have asked Russia to stop attacking the Syrian opposition, expressing "deep concern" over such actions, stating: "These military actions constitute a further escalation and will only fuel more extremism and radicalization.... We call on the Russian Federation to immediately cease its attacks on the Syrian opposition and civilians and to focus its efforts on fighting DAESH."

The entire picture encompasses more than just Turkey and dates back further than October.

Russian jets have been "testing" NATO airspace since 2014; that is from when they invaded Ukraine.

What does "testing" mean here? Russia is making incursions into NATO airspace to target the reaction. With such incurisons the Russians can learn about the radar system. They can learn where planes are scrambled from, how rapid the response time is and which bases are most active. But more generally, and perhaps more importantly for the Russians, they can guage how the leaders of the country in question respond. And in this response, do the people of the nation support their leader? Also they can understand how seriously the international community and/or NATO backs up the response of the leader in question.

According to one expert from the European Leaders Network: "Even though direct military confrontation has been avoided...aggressive Russian posturing and the readiness of Western forces to show resolve increases the risk of unintended escalation and the danger of losing control over the situation." How interesting that this statement was made over a year ago, in 2014.

Indeed, in 2014, before Russia's direct involvement in the Syrian conflict, Western think tanks criticized Russia for risking military escalation across Europe due to its "Cold War-style brinkmanship."

Since 2014 there have been over 100 incidents in which Russian planes have violated NATO airspace, ranging from the U.K. to Norway. They have also violated U.S. airspace; it is clear that a pattern has been established.

From the North Sea to the Baltic and Artic regions, violations of national airspace have been listed, as well as violations at sea. Mid-air collisions with commercial air traffic have been narrowly avoided as well.

A report in The New York Times dated Oct. 6, 2015 states that the Royal Air Force scrambled warplanes due to the incurrsion of Russian bombers off the coast of Britain.

Such practices were common during the Cold War (thus Cold War-brinkmanship). The purpose behind such flights were to test Western defenses, to test reactions.

Norway has had to scramble F-16 fighters against Russian warplanes over 70 times in 2014. NATO reported an "unusual spike" in Russian military flights across Europe in 2014. Norway, Britain, Portugal, Germany, Denmark and Turkey have scrambled fighters in response to such incurrsions; so have two non-NATO countries, Finland and Sweden. This is not just a military threat; there was a near-collision between a Scandinavian Airlines 737 and a Russian reconnaissance aircraft. The Russian aircraft had failed to broadcast its position.

According to another source, NATO-member aircraft carried out more than 500 scrambles over Europe in 2014 - four times the previous year. Eighty-five percent of these scrambles were carried out to intercept Russian aircraft. This is the highest number since the end of the Cold War. Indeed, after 2006 for seven years there were only seven incursions over Estonian airspace.

The problem is not only incursions into airspace. As evidenced in last Tuesday's event, Russian military aircraft are remarkably unresponsive. They switch their transponders off , do not respond to air traffic controllers and do not share flight plans. This makes it hard for the countries whose airspace is being violated to know how to react. Are such flights an error, a deliberate aggressive attack or a pilot in distress?

Some of the airspace violations that the Russians have carried out since 2014 are as below:

An incurrsion into Estonian airspace was made in Feb. 24, 2014; this may not seem significant to those of us who are not familiar with Estonian culture, but this day was Estonian Independence Day; nothing more need be said.

In May 2014 the Russians violated American airspace over California and Guam; in June 2014 they were again flying into American airspace, this time over Alaska and California. In June 2014 the Russians carried out a simulated attack of Bornholm, a Danish island. At the time 90,000 guests were participating in a political festival on the island. The Russian planes were carrying live missiles. This incursion cannot be claimed as an "error" or an innocent military exercise and has been described as the most "overtly offensive" Russian simulated strike since the Cold War.

In August 2014 another violation of U.S. airspace occurred, followed by yet another in September 2014; this latter one coincided with a NATO summit being held in Wales. In October 2014 the Russians violated Japanese airspace. Indeed from May to October 2014 Japan had to more than double its scrambles against Russian aircraft.

On Oct. 21, 2014 Russian planes violated Estonian airspace, and a violation of NATO airspace occurred over the Baltic Sea on the Oct. 28 of the same year. The following day there were incursions over the Baltic Sea, Black Sea, North Sea and Atlantic Ocean.

What comes to the fore with this short list of what Russia was up to in 2014 is that Russia's geographical position means that it can easily threaten Japan, America, Europe, NATO and the Middle East.

After what had happened in October, Turkey warned Russia that the latter would be responsible for any "undesired incident" if another incident were to take place. Yet Putin's attitude is that it is Turkey to blame. Any such incident is serious and grave; any deaths incurred are to be mourned. Yet when blame is being placed, the entire picture should be taken into account.

Last Tuesday's events are worrying. But the fact that Turkey acted and shot down the planes can only be understood as a reasonable reaction. Planes that refuse to identify themselves cannot be assumed to have good intentions. Moreover, taking into account Russia's brinkmanship in recent times, the Turkish action is equivalent to standing up to the playground bully. Russia has been strutting and posturing around the yard. Finally, rather than just shaking one's head, using strong words or making veiled threats, someone has stood up and punched the bully in the nose. Under the official statements, there is a sigh of relief being exhaled by NATO, Europe and others. Russia is a welcome partner in combating DAESH. But it must combat DAESH, not the anti-Assad alliances; nor should it threaten NATO members, tauntingly flying in and out of their airspace in an attempt to cow them.