A historic municipal building in the heart of modern Beyoğlu 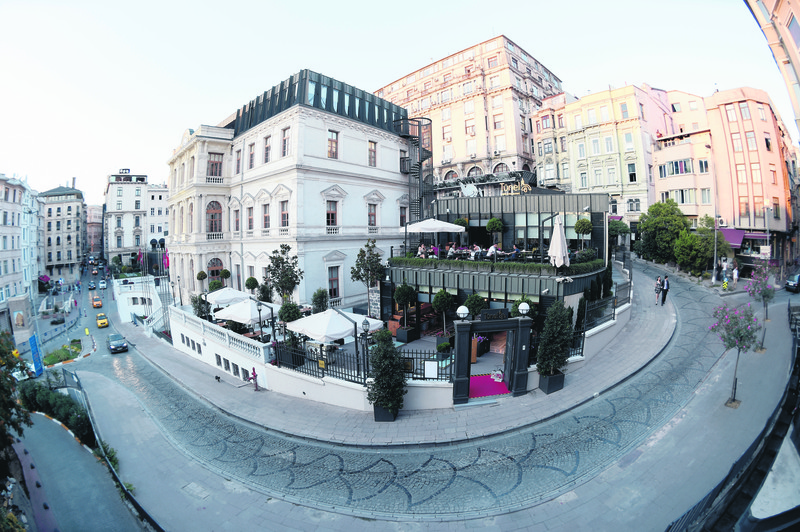 Beyoğlu, the liveliest district in Istanbul, has been home to many different cultures for years. There is much to say about the area's long-rooted history, but its municipal building, which was re-opened after a restoration process this year, brings its own story. Daily Sabah spoke to Mayor Ahmet Misbah Demircan to share how the Ottoman Empire's first municipal building influenced urbanisation with a modern touch

When someone mentions Istanbul's Beyoğlu district, a gleaming, modern settlement comes to the mind that blends both vintage and historic atmospheres surrounded by cultural richness. Echoing elements of the ancient Ottoman Empire, Beyoğlu is where modern urbanization started. 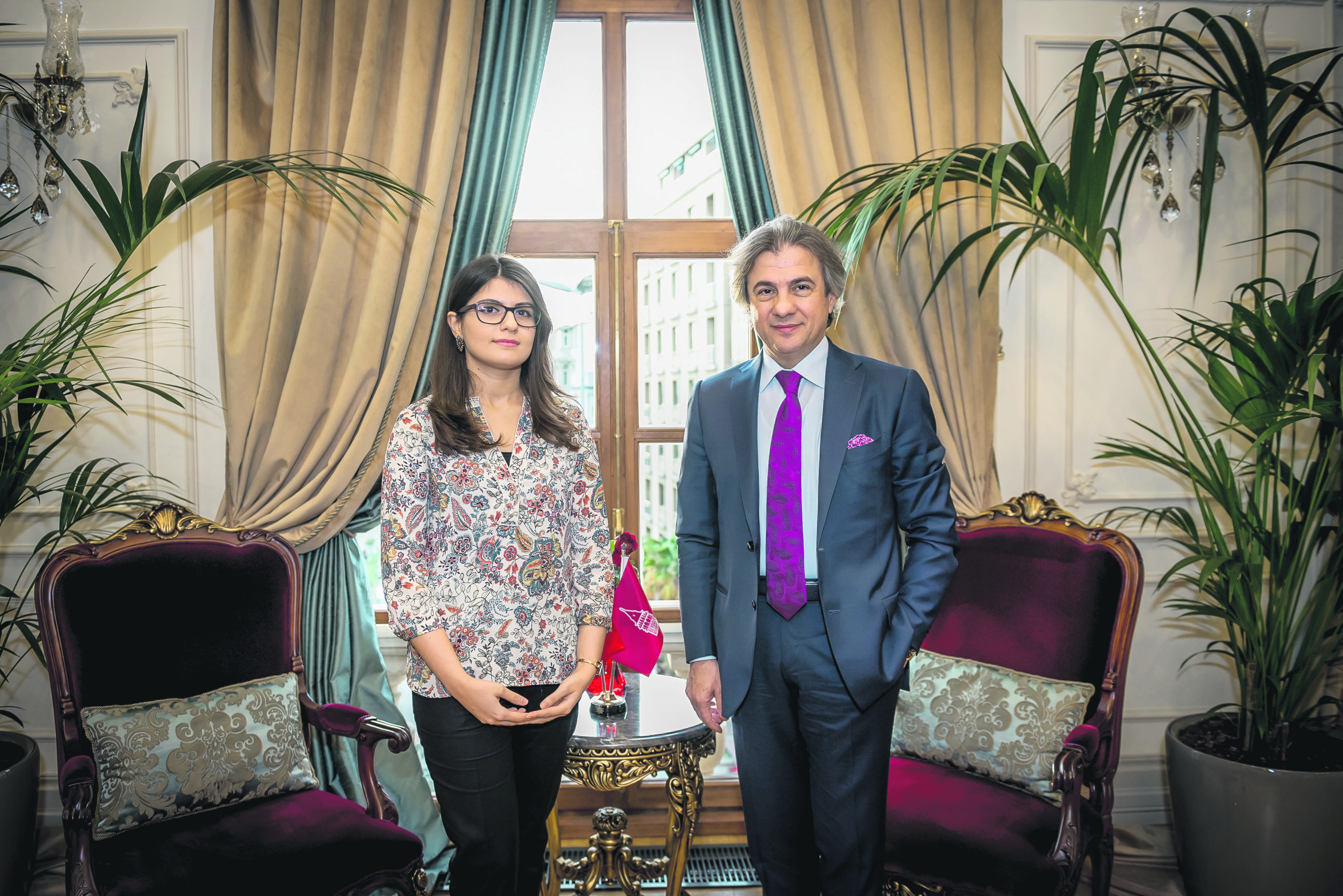 Even in the 15th century, this district was home to foreign embassies. Comprised of 45 neighborhoods such as Gümüşsuyu, Cihangir, Sütlüce, Kasımpaşa and the famous İstiklal district, Beyoğlu has always offered a vibrant life. 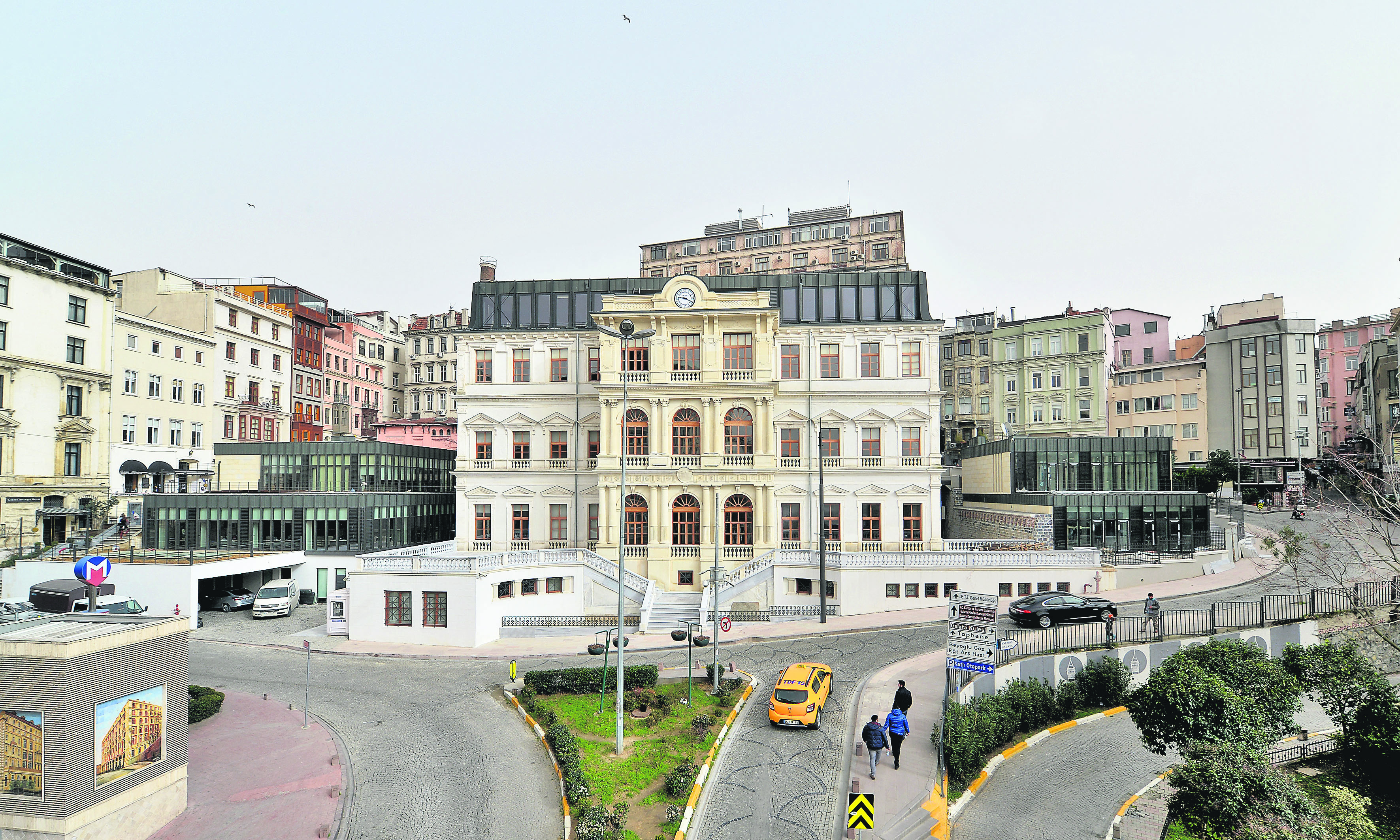 In 1858, Istanbul used to have 14 districts and Beyoğlu was first named after a Parisian settlement, "Sixieme arrondissement" (6th district), a well-organized and prosperous area in France. 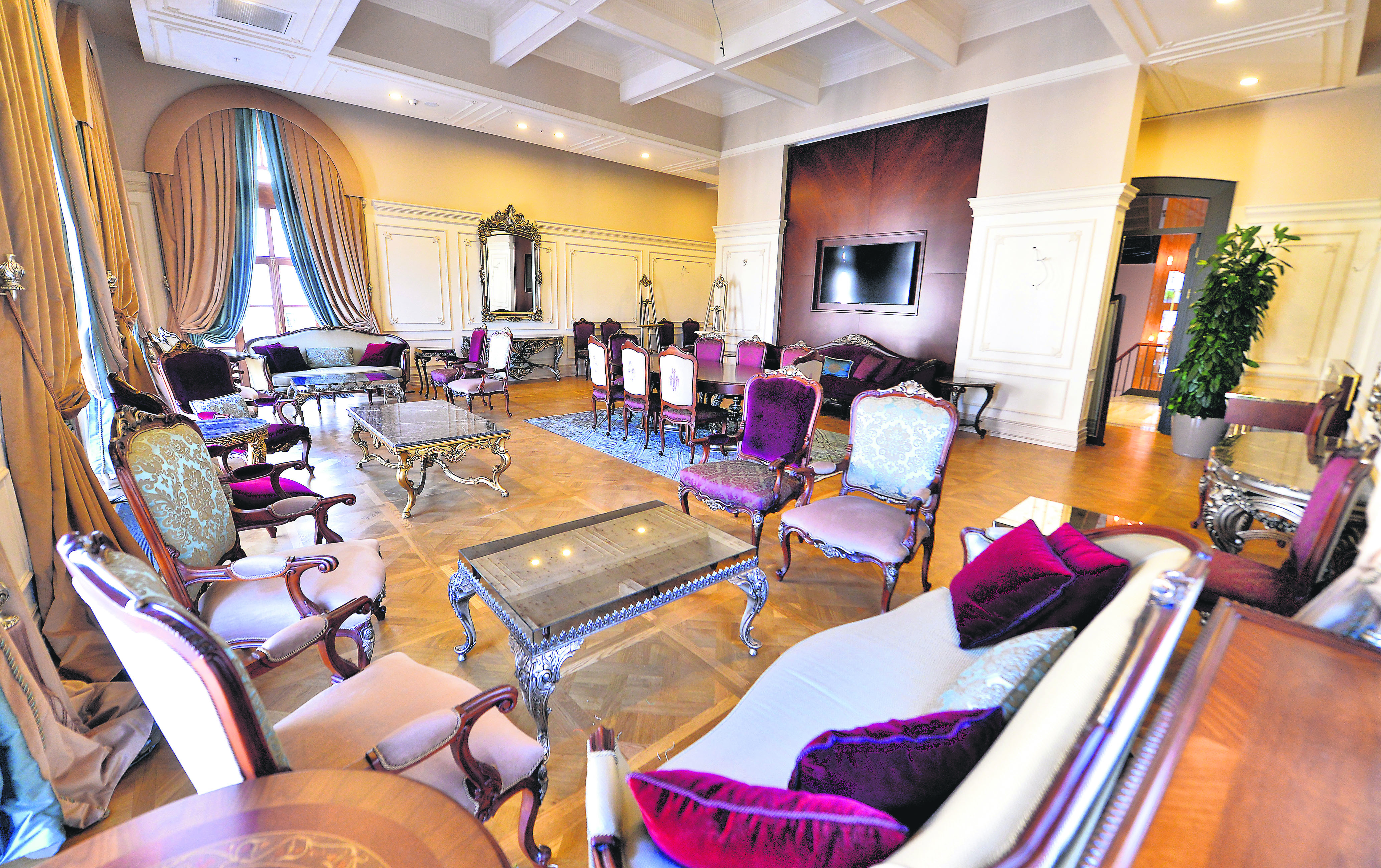 The Ottoman Empire's first municipal building, currently serving as the headquarters of the district's municipality, was also established in Beyoğlu. 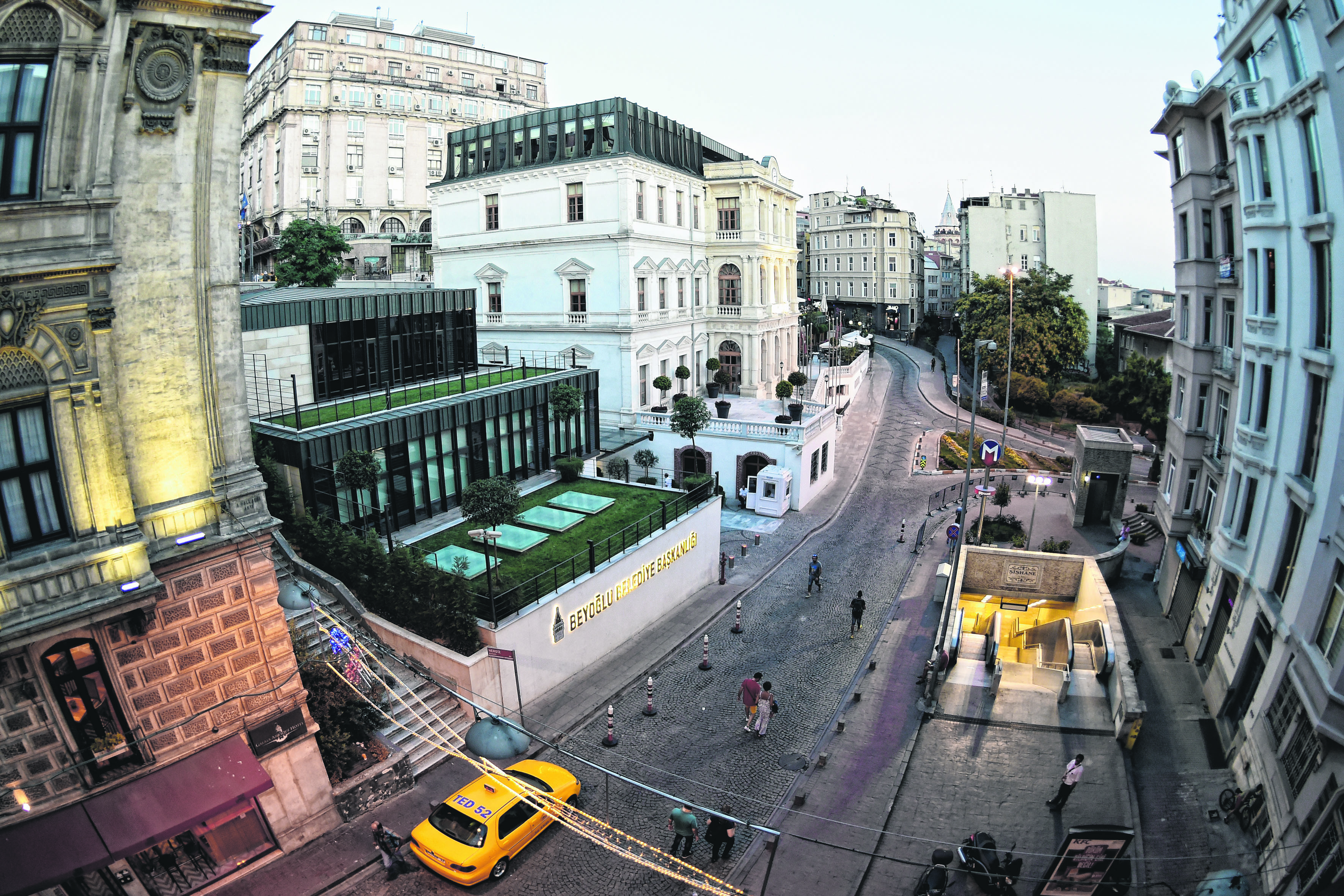 The building, constructed in the 19th century, is an example of the history in the district and the modern elements that are intertwined. The building underwent a complete restoration process, from 2012 to 2015. Daily Sabah sat in an interview with Beyoğlu Mayor Ahmet Misbah Demircan to talk about the historic municipal building as well as life and transformation in Beyoğlu over the years.

Daily Sabah: The historic municipal building of the Beyoğlu district had a significant role in the Ottoman Empire's modernization process as well as the district's development. What would you like to say about its importance as the empire's the first municipal building?

Ahmet Misbah Demircan: Considering the city's urbanization process, both the municipality and the building have significance. Beyoğlu was the first municipality of the Ottoman Empire established upon the firman of Sultan Abdülmecid. The municipality was founded in 1856, yet the building's construction commenced in 1879, taking four years to complete. Since then, the building has always served as municipal headquarters. This year, we re-opened it after three years of restoration work with an official ceremony overseen by President Recep Tayyip Erdoğan.

AD: The building's architectural style can be seen in other European countries as different nations have been inspired by each other's architecture. In the 1900s, there were the Levantines, who had Italian and French origins, in Beyoğlu. There was also an Italian labor union, where was said to include around 30,000 workers. Casa Garibaldi and Giuseppe Mazzini, who were once living in Beyoğlu, later went on to lead a national movement in Italy. They were told to take inspiration from their time in Beyoğlu, which harbors different ideas regarding peace. As you know, Istanbul is a multi-cultural city and each ethnic group came with its own traditions.

DS: How was the tughra of Ottoman Sultan Abdülhamid II discovered in the building?

AD: The tughra was discovered during the restoration process. We planned an additional section of the building for elevator use. This artifact emerged from an elevator shaft. At first, no one, including me, knew to which Ottoman sultan the tughra was dedicated to, but we conducted a study and learned it belonged to Sultan Abdülhamid II. Although the construction decision was taken previously, the building [as said before] was built during his reign.

DS: How did the building look prior to its restoration? What kind of novelties can we find here? Can we say that the restoration is a part of Beyoğlu's transformation?

AD: The municipal building was indeed weary with additional sections that normally should not have been established. There were mezzanines since the ceilings are very high. [Prior to the restoration], when you looked outside you feel the building has lost its grand atmosphere. Based on our principle of, "designing for the future while sustaining our traditional roots," the building underwent a comprehensive restoration process. The municipality modernized it with some new sections. Two small sections have been established on two sides of the building. We tried to convey the message that new things continuously enter our lives, but we should use them to polish the past. In the restoration process, the past and the present supported each other. Aside from the municipal building, other restorations still continue in other parts of Beyoğlu such as the Tepebaşı Quarter and the Emek Movie Theater. In all restorations, we define a style for the future work. By the way, the room we are sitting in right now was designed in line with the architecture characteristics of the period. All colors and decorations, along with wall embellishments, reflect the Ottoman style. We call the room "Mabeyn," meaning reception and welcome. We conclude our agreements in this room.

DS: Were any foreign experts or architects involved in this process?

AD: No, our own staff took on the whole job. İlhan Turan, deputy mayor and Serap Sarıcı, municipal architect, were among the principal staff in the restoration project. We also worked with certain consultant firms, but followed everything by ourselves. I also personally checked each step.

DS: Before talking more about the Beyoğlu district, could you tell us what the historic building has to offer citizens?

AD: For the municipal building, we thought we should include any section that can be necessary for municipal staff and citizens. We have opened a cafe and restaurant. There are plenty of restaurants around Beyoğlu. These facilities are an indication of what we expect from investors interested in the restaurant sector. The next feature is that you can sit at the café even if you do not have something to do at the municipality. Those who want to feel this historic atmosphere are more than welcome. I host my guests there, too. There is a hall for the municipal council, yet it is also used as multi-purpose area. The Beyoğlu Municipality collaborates with Istanbul Aydın University in a master's degree program titled, "Brand Cities." Master students take some of their classes here. The building is host to various events and symposiums, too. Additionally, an art gallery has been established for exhibitions. In other words, we can organize a number of events without searching for a place outside. Our building shows the municipality's stance regarding citizens. I believe municipalities are a source of inspiration as encourage citizens and become a beacon of hope. If you lead people, then they will do the same. This is what municipalities must do, I believe.

DS: In one of your statements, you said, "This historic building is the ancestor of Turkish municipality." Considering your words, how has the municipality contributed to Beyoğlu as well as modern municipality perception since the Tanzimat-era?

AD: It is possible to discuss a municipality in two main parts. First, a municipality is responsible for basic city works such as cleaning, lighting and garbage collecting. On the other side, designing master plans - in other words - defining the appearance of streets, functions of buildings, the image the municipality presents to visitors, are the most important job for us. When you think of İstiklal Street's historic atmosphere, it is the municipality that gave the street such an impressive look. In each period, a different style emerged and introduced another dimension to Beyoğlu. To illustrate, we encouraged the use of French windows at certain cafes and many others took it as an example later. A municipality does more than you think. You may compare it to a fashion designer or a life mentor, both of whom makes your life or appearance better. Municipalities shape your life. For a long time, municipalities were seen as organization that merely clean your street. However, these entities have a main mission which is to design schools, car parks, religious places and, more importantly, the identity of a city. The Beyoğlu Municipality has always been associated with culture and art, not with trade or industry. If you ask how the district has gained this identity, we should the go back to the times of Ottoman Sultan Beyazıt. These days, we are carrying out an urban transformation project in Okmeydanı to eliminate irregular urbanization, a result of rapid immigration.

DS: Finally, can you tell us about some of the municipality's projects?

AD: We completed various projects. The Beyoğlu Municipality has established different sub-management institutions in each neighborhood. Also, each neighborhood council hold meetings on a regular basis. The municipality carries out social market and environmental design projects. In different neighborhoods, we have different priorities. Restoration is the principal work in Galata, while urban transformation is more important in Okmeydanı. New urban transformation also takes place in Tarlabaşı. As I said, we have regular responsibilities as well as brand projects. I believe governance is what we do the best. Since the industrial times, urban life has evolved. Our necessities have also changed. Buildings have gotten bigger and streets have become larger. A migration flow is observed in Tarlabaşı. Residents left their small homes and then another flow of migrants came but have since left. It will be a very important landmark when the project is finalized.
Last Update: Dec 03, 2015 2:21 pm
RELATED TOPICS