Framing women's status through the ages 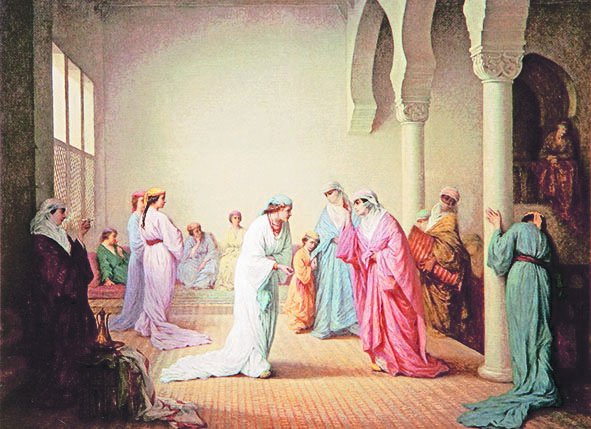 Throughout history, women have struggled for equality and gained political and civil rights gradually. In Islamic law, a number of binding provisions, although not very well known, were introduced to empower women at home and in society

Holy books state that human beings are created in pairs, as man and woman. Both of them are equal in the presence of God due to their existence as humans. Throughout history, however, the physical differences between them have always resulted in inequalities and domination of the stronger over the weak.

Shining in Arabia, a rather undeveloped society in the seventh century, Islam introduced an almost feminist approach to women. Namely, the social and legal status of women reached an incredible level. Until the seventh century, a son was considered more valuable than a daughter in nearly all societies, due to the widespread belief that having a son fulfilled a service to the souls of his ancestors.

In the Ancient Greek and Roman Empires, where are considered the cradle of modern civilization, women were always under the guardianship of men. They were allowed to exercise their civil rights only through a custodial guardian. Family inheritances were given to male heirs and female heirs could not receive inheritance. Kinship was not established through women but through the father and children were not considered their mother's relative. Although the Torah and the Bible brought improvement to the status of women in society during those times, social norms regarding the role of women regressed over the years.

The Quran declares woman and man equal in the presence of God. A woman is entitled to her own wealth and can use it as she wishes, without asking anyone. Her husband cannot interfere with her property. Khadija, the first wife of the Prophet Muhammad, engaged in trade before and after the arrival of Islam. She had many secretaries, officers and servants. In the Ottoman Empire, 36 percent of people who established foundations were women. This shows that women had their own wealth and were free to use it.

In the laws implemented by the Roman Emperor Iustinianus I, however, women were placed on the same status level as mentally disabled people. In the U.K., women had to file claims with the consent of her husband and the property of a woman was transferred to her husband. After 1870, women were given property rights and the freedom of contract. It was in 1935 that married women were given equal status with their husbands.

Under Islamic law, women can marry freely. The Quran discourages marrying numerous women, while specifying that a man, who is able to fulfill the necessary conditions, can get married with four women, at most. However, the Quran suggests to choose monogamy.

Women were granted the right to divorce their husbands. In the Quran, it is prohibited to hurt a woman that performs the requirements of a marriage. Since it is easy to get married or divorced in Islam, adultery and other shameful acts do not frequently happen. The punishment for these offenses is severe.

The Quran also states that, even if a woman is rich, her husband is supposed to take care of her during marriage. In Islamic law, the woman takes a certain amount of money called "maehr" in case of problems that the marriage causes her. The husband, on the other side, must provide proof to his wife's nafaqa (financial support) before he goes on a trip. The right of succession is granted to women, although they are not required to work to earn a living. Under certain conditions, the share of inheritance for women can be the same amount as the male, or it can be less or more. Until 1938, the inheritance of a man who only had a daughter was transferred to his closest male relative in the U.K. This situation is mentioned dramatically in various novels.

Prophet Muhammad was a living example of someone that adopted the principles of the Quran. The prophet's attitude towards his family introduced an ideal view. In his last sermon given before his death, Prophet Muhammad said, "Allah entrusted women to men. If anyone hurts his wife, I will be the complainant in the after-life." Women are not discouraged from studying science. There are many women who have had a role in social sciences and religion throughout history. Prophet Muhammad's second wife, Aisha, was the woman who narrated the prophet's [hadith] words and actions the most.

In the Ottoman Empire, modern schools were established where women could freely study science without mixing with men. Due to their physical differences, women have less religious responsibilities. They are also not responsible for certain religious practices or for defending the nation militarily. Compared to men, women are also punished with lighter penalties in certain criminal cases and they are not given collective punishment compensation.Women are also not restricted from public service. In practical life, however, they were not seen in public service roles very often, because they were not allowed to mingle with men and the Quran specifies that they should wear hijab to cover their hair. Although this practise did not create an obstacle, it did not become widespread due to both women's preference and social traditions.

In Islamic history, many famous and unknown female hero's stood by the side of many male figures. The mother of an Ottoman sultan is considered the first lady and also used to rule the harem. "Valide sultans," or "mothers" in Ottoman Turkish, acted as regents for the young emperors. The number of Valide sultans, who saved the sultanate on the verge of a crisis is immense.

The Quran orders respect and obedience towards one's parents, but especially for mothers. The Quran specifies that the husband is the head of the family, providing that he will pay maintenance allowance. However, a woman is not the slave of a man. This is because marriage refers to the union of two people with equal rights and responsibilities. If a woman comes from a rich family, then her husband has to employ a servant for her. Women are not supposed to do house work. Since a man is physically stronger, he looks after the work outside the home. Although women are considered to be physically different from men, they have a rich emotional world, take care of the housework, and children. This is how Islam established a system for women.
RELATED TOPICS