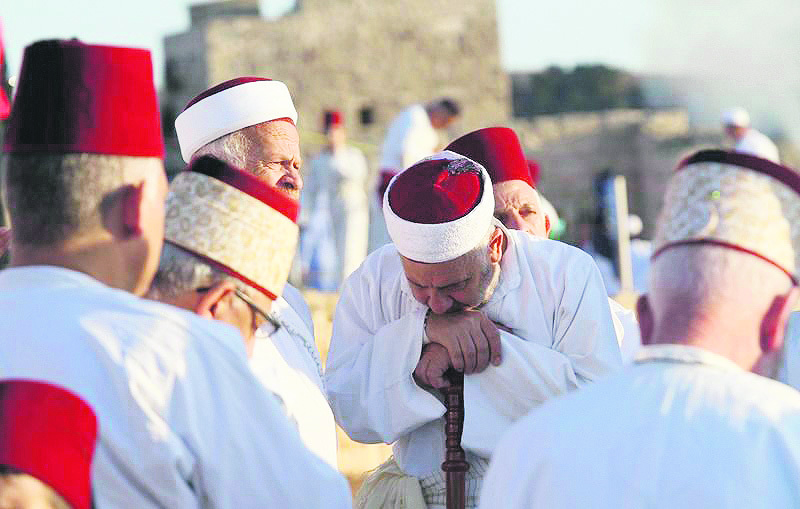 Claiming descent from ancient Israelites, Samaritans deny the sacredness of Jerusalem and see contemporary Judaism as a deviation from the true faith

On the summit of Mt. Gerizim near the West Bank city of Nablus, members of the Samaritan community - one of the smallest religious communities in the world - build their homes, believing the spot to be the most sacred on earth.

Describing themselves as Palestinians, the Samaritans adhere to an Abrahamic religion closely related to Judaism. While claiming to be "Beni Israel," the true descendants of the ancient Israelites, they deny the sacredness of the city of Jerusalem and see mainstream contemporary Judaism as a deviation from the original faith of Moses and the Old Testament prophets.

The Samaritans, who claim to possess the oldest extant copy of the Torah, the Jewish holy book - one that dates back 3,600 years - speak both Arabic and Modern Hebrew. They are also fluent in ancient Hebrew, the language in which the Torah was written, according to Hosni al-Samiri, a Samaritan priest and religious researcher. "We are Nablusis [from Nablus]," al-Samiri told Anadolu Agency (AA). "We're an integral part of the Palestinian people, and we thank the Muslims who have always supported us." According to al-Samiri, the 12th-century Muslim leader Salah Eddin al-Ayyubi - known in the West as Saladin - allowed the Samaritans to perform their religious rituals on Mt. Gerizim after they had been prevented from doing so by the Byzantines for 150 years.

The Samaritans believe Mt. Gerizim represents the most sacred place for the Beni Israel since their exodus from Pharaoh's Egypt. "Mt. Gerizim, the most sacred spot for the Samaritans, is mentioned in the Torah numerous times, where it is referred to as 'Beit El,' or 'House of God,'" al-Samiri said. "As a religious researcher, I have counted 120 references [in the Torah] to the sacredness of Mt. Gerizim, while there is no single genuine reference to the sanctity of Jerusalem," he added. "The Jews broke away from the original faith," al-Samiri told AA. "There is nothing called 'the Jews' [in the Torah]; there is only the people of Beni Israel. The Israelites broke away from the original faith and took Jerusalem as their new holy place. There are thousands of differences between the ancient Torah and what the [modern] Jews claim. They have even changed the Hebrew language," he added.

According to the priest, the Samaritan faith is based on five pillars: That there is one God, that Moses is the prophet of God, the authority of the five books of the Torah (the Pentateuch), the sacredness of Mt. Gerizim and that man will one day be judged by God in a final day of reckoning. On the summit of Mt. Gerizim - almost 900 meters above sea level - the observer can, on a clear day, see the Mediterranean Sea to the west and the peak of Mt. Hermon to the north. "We are the true descendants of Beni Israel," al-Samiri reiterated. "The word 'Samaritan' literally means 'guardian of the Law' in Hebrew."

Ghaliah, a 26-year-old Samaritan, works at the Samaritan Museum on the summit of Mt. Gerizim, which contains Samaritan artifacts and documents from throughout history. "Mt. Gerizim is my home and my qibla [direction for prayer]," she told AA. "I'm a Samaritan by faith and a Palestinian by nationality. I have Muslim and Samaritan friends, and I live in Nablus as a Palestinian. It's my country, where I don't feel like a stranger," she said. A young Muslim woman who works alongside Ghaliah described the museum as "a model of coexistence." Badawiyah al-Samiri, a Samaritan journalist, has worked at the official Palestinian news agency WAFA for 11 years. "I write about the tribulations of the Palestinian people: The detentions, invasions and the victims of Israeli violence. I'm an integral part of the Palestinian people. I have Muslim friends who I consider my brothers, who have always supported me in difficult circumstances," she told AA.
RELATED TOPICS