You Do Not Speak in My Name 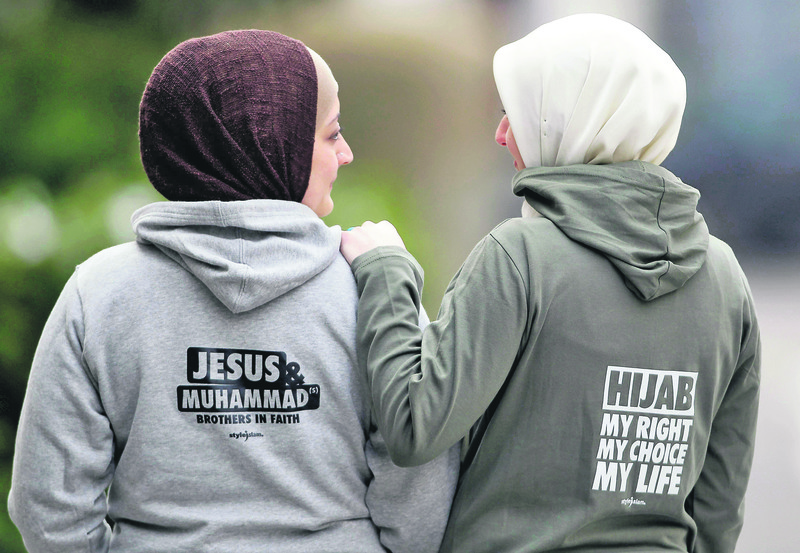 On Dec. 21, two female journalists, Asra Q. Nomani and Hala Arafa, wrote an article in the Washington Post titled ‘As Muslim women, we actually ask you not to wear the hijab in the name of interfaith solidarity.' But these authors do not speak in the name of all Muslim women

Nomani and Arafa's article in the Washington Post starts "Last week, three female religious leaders - a Jewish rabbi, an Episcopal vicar and a Unitarian reverend - and a male imam, or Muslim prayer leader, walked into the sacred space ...at the Khadeeja Islamic Center in West Valley City, Utah...." With such an introduction, my Western mind makes unwanted connections, and I half- expect an off-color racist joke.

The rest of the article does not disappoint. However, although off-color, this is no joke. The article was written with all seriousness; it is full of opinions that claim to speak in the name of Muslim women. As a Muslim woman, let me say that neither Nomani nor Arafa speak in my name. I have many issues with the article. I will not mention every reactionary, reductionist attitude which has caused me to take umbrage. Many people have already reacted (see: Keziah Ridgeway http://www.altmuslimah.com/2015/12/a-response-to-asra-nomani-and-hala-arafa/ and Mohammed Gilan, in a brilliant send-up of the piece, at https://medium.com/@mohamedghilan/as-muslim-men-we-actually-ask-you-not-to-grow-your-beard-in-the-name-of-interfaith-solidarity) Here I will deal with 10 issues that I find offensive and ridiculous.

The first problem is when the authors tell us how the non-Muslim women were smiling while wearing the Muslim "hijab" (headscarf). The authors tell us that these smiling women were actually a "painful reminder" to them of a "well-financed effort by conservative Muslims to...spread an ideology of political Islam, called 'Islamism.' " What causes them pain brings joy to me; these women are merely displaying respect for the location. A non-Muslim woman putting on a headscarf in a mosque is a sign of respect. And this is not limited to Islam; when visiting the Vatican tourists are greeted by signs indicating that women cannot wear miniskirts or sleeveless tops, and men must wear long trousers. When visiting a synagogue, women should not wear trousers and men should cover their heads. Of course, there are those who say that such practices are sexist or outdated; but most visitors have no problem conforming. They conform out of respect. What happened in Utah was no different; the women put on headscarves out of respect.

The second problem is the idea that there is a "well-financed effort to spread Islamism;" this causes bile to rise to my throat. In Turkey women who wore headscarves were subjected to oppression, marginalized and deprived of basic rights of employment and education for decades. Only in the past three years have women who choose to wear headscarves been able to pursue education or have a career in government offices. The headscarf was made into a political tool by those in Turkey who tried to drive both the headscarf and the women who sported it out of the public sphere. Now this simple piece of cloth is no longer politically charged. This was achieved by changing the laws and allowing women to wear or not wear the headscarf, as they saw fit. That is, the controversy has been removed from the matter.

To try to drum up controversy over the scarf is what makes it a political tool. This is what the authors are trying to do; fortunately, they are doing so without much skill.

The third problem I have with the text is the sentence: "The hijab is a symbol of an interpretation of Islam we reject...women are a sexual distraction to men...." This is merely oversimplifying and obfuscating what the headscarf is. The headscarf is a statement of belief, a reminder to the wearer and to others who the wearer is and what values they hold dear. That is not to say that women who do not wear the headscarf cannot hold these values. But the wearer of the headscarf is openly declaring herself.

If the authors truly believe that women believe a piece of material can prevent sexual harassment, then they are naive. No covered woman believes that the scarf is a shield that protects her against harm, some kind of religious cloak of invisibility. Moreover, Muslim women do not believe that all men are corrupt or sexual predators. To suggest this is insulting. We are not stupid.

The fourth problem is to suggest that mosques as an institution are not women-friendly. It is true that in many countries mosques are not welcoming to women, shoving them into a small cramped room. Such practices are wrong, and any attempt to bring them onto the agenda are welcome. Women should be encouraged to be in the mosques and given equal and appropriate space. But many countries have mosques that are women-friendly. The mosque as an institution is not in its essence anti-women.

I know many women who do not wear the scarf, but are practicing Muslims. Yet, when they listen to the Quran or pray they don the scarf. If women want to pray without the headscarf, that is their choice. It does not affect me one way or another. But there should be no attempt to force this innovation onto women who are not interested in it. To do so would be nothing less than oppression.

It is interesting that the authors themselves mention an Iranian campaign which states "The right for individual Iranian women to choose whether they want hijab." The key word here is choice.

The fifth issue I have with this article is that it is clear that the authors are not on the side of choice. They blatantly label the hijab as something that has been imposed on women by men. The implication is that headscarf-wearing women do not have freedom; perhaps the authors think this is because these women do not have the brains to stand up for themselves.

Such an attitude is not a new thing. In Turkey, during the terrible 1990s, when women with headscarves were marginalized, I, along with thousands, perhaps millions, of other women, was subjected to this form of oppression over and over again. To give just one example, one day I went to my children's primary school. I joined some of the parents who were waiting to talk with the teacher about some matter or another. Finally, I had a chance to speak up. As I was talking one of the other parents turned to the teacher and pointing at me asked: "Is she foreign?" The teacher said yes I was. Then this other parent, a woman without a headscarf (I was the only one there with a headscarf) said: "But she's wearing a headscarf." Without missing a beat, the teacher replied: "Yes, her husband made her wear it." I didn't have much Turkish, but I leapt to my own defense. "I chose this, it has nothing to do with my husband." In the evening, I related this conversation to my better-half. With a wry grin he commented "Like I or anyone else could make you do anything you don't want to...." Yet, merely by putting a scarf on my head I was perceived as oppressed, a doormat, as someone with no voice or opinion. Did these people realize what putting on the headscarf had cost me? Did they realize how much I had sacrificed? Did they realize how much more difficult my life had become? The next problem occurs when, in an attempt to sully the headscarf, the authors lump all the bogeymen into one sentence: "This modern-day movement, codified by Iran, Saudi Arabia, Taliban Afghanistan and the Islamic State...." True, these entities have made wearing the headscarf or burqa or whatever compulsory. But to equate the headscarf with them overlooks a very important fact and conflates the issues at hand. Many women choose to wear the headscarf. I would venture to say that the vast majority of educated, professional women who wear headscarves in the West, in Turkey, Egypt, Jordan, Morocco, Tunisia or other countries where there are no laws regulating the headscarf, do so for personal reasons, not because they have been compelled by family or society.

To suggest otherwise, as the two authors do in the Washington Post, is to claim that we need to be saved. Muslim women, as a whole, do not need to be saved. Like any other sector of society, i.e. people living below the poverty line, or the privileged, or factory workers, or women, men or children, there are those who are in need of a helping hand, who are victims of oppression or brutality. But to lump all us headscarf-wearing women into one group and to suggest that we need to be saved - as we are incapable of saving ourselves - is arrogant and insulting.

Problem number seven occurs when the authors complain that members of the Council on American-Islamic Relations had the audacity to create an "hijab legal defense fund." As the case with the clothing store and the hijabi girl showed last year, there is a need for such a defense fund. Perhaps there is a need for a "non-hijabi legal defense fund" to ensure that non-hijabi Muslim women are not discriminated against for their bare heads, or to ensure that they have the right to make a free choice about their apparel. Wherever there is such a need, then it should be established.

The eighth issue I have with this article is when the authors claim that Egyptian women marched on the streets in 1919, demanding the right to vote; at this time "they took off their veils, imported as a cultural tradition from the Ottoman Empire...the veil then became a relic of the past..."Huh? So the Egyptian friends I have who wear the hijab are all relics? They are Ottoman revivalists? The photographs from the Arab Spring, from Tahrir and Rabaa Squares, photographs of women wearing headscarves protesting were all such people? Can we forget the awful footage of soldiers dragging a woman in Islamic headscarf down the street? In fact, what happened in Egypt clearly shows that the headscarf serves as no protection for women against the brutality of others, male or female. And what really confuses me is that one of the authors is of Egyptian extraction; I am truly confused - I really don't get it...

Nomani has been criticized for her views before; she will probably be criticized again. She is a prolific writer; but to take her seriously as a voice that represents all Muslims would be a grave error. She represents a small trend; she represents a voice that can barely be heard repeated throughout the Muslim world. That is not a problem for her. It is not the Muslim world she is addressing. Her voice reaches out to those who are not familiar with this world and she presents them with a warped view, misrepresenting the reality, but giving herself legitimacy, over and over again. This is my 10th issue with this article.

The headscarf should not be compulsory. Nor should it be banned. The headscarf should not be a political instrument. It is a personal choice. Wearing or not wearing the headscarf is my decision, or your decision. I respect your right not to wear it. Please respect my right to wear it. And please do not get up on your soap box and pretend you are talking for Muslim women everywhere. You are not.
Last Update: Dec 26, 2015 10:24 pm