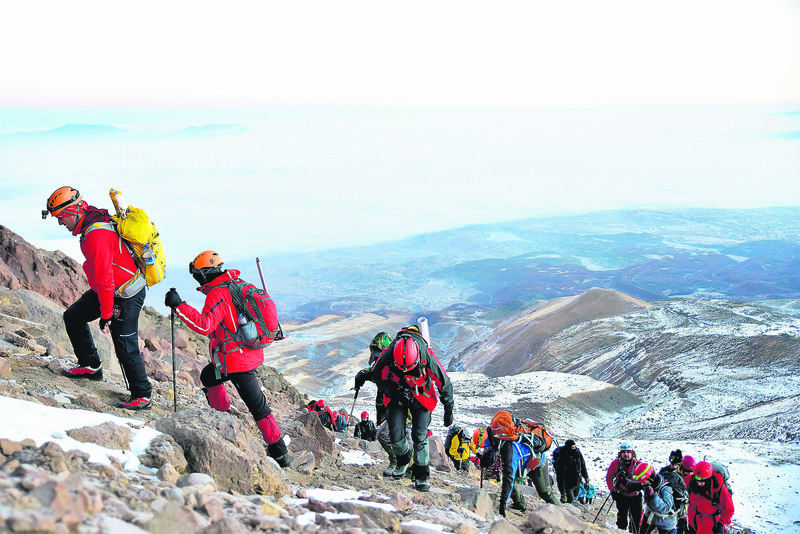 A group of mountaineers head up to the Mt. Hasan, whose slopes offer an unprecedented view over the central Anatolian plateau.
by Daily Sabah with AA
Jan 05, 2016 12:00 am

Located near Cappadoccia, Mount Hasan, a dormant volcano with an altitude of more than 3,000 meters has become a popular winter climbing spot for amateur and professional mountaineers

Lots of snow, ice and freezing water are enough to make people stay at home, minus the exception of mountaineers bravely climbing Hasan Dağı (Mt. Hasan), the second-highest peak of central Anatolia, lying in the Aksaray province around 70 miles northeast from the ancient city of Çatalhöyük. With an altitude of more than 3,000 meters, the mountain is a volcanic formation covered by oak forests up to an altitude of around 1,800 meters.

Mustafa Doğan, the head of the provincial culture and tourism directorate, told Anadolu Agency (AA) that Mt. Hasan mesmerizes climbers in all four seasons with its view in different angles. Both amateur and professional climbers can experience Mt. Hasan and reach its peak. The volcanic mountain lies on a junction point in the middle of Anatolia. "Mountaineers prefer the place as it is of equal distance to many cities around the country," Doğan said.

Mountaineers generally camp near the Karbeyaz Hotel that lies 1,980 meters up. It takes four-to-six hours to reach the peak, which is at an altitude of 3,268 meters. "The most important advantage of Mt. Hasan is that the mountain is among the safest ones, with its different escape routes should the necessary measures have to be taken. I believe Mt. Hasan can be an ideal starting point for amateurs craving for an adventurous experience," Doğan said, adding that the mount also has the lowest risk for volcanic eruptions when compared to other mountains around Turkey.

Each year, an increasing interest is shown to mountaineering. "The mountain attracts thousands of mountaineers," Doğan said. In 2015, around 600 professional and amateur mountaineers took part in two events that were held there. "2015 was a fruitful year for touristic and sports events on Mt. Hasan," he said. In July, 350 mountaineers took part in the first edition of the Mt. Hasan Climbing Festival. Another event taking place in December drew around 250 mountaineers. "The second event was organized to raise awareness for leukemia," Doğan said. Aside from these activities, dozens of clubs and university students organize weekend trips to Mt. Hasan. Moreover, almost 140 sportsmen took part in the International XC Open Mt. Hasan Long Distance Paragliding event.

Mt. Hasan is a twin-peak stratovolcano, one of the three volcanoes in Cappadocia that caused the formation of fairy chimneys and deep canyons. As a popular center for mountaineering, adventure sports, skiing and trekking, the mountain is also a good alternative for cultural tourism as there are a number of historic remains on its slopes, including Sarıgöl Church, the ancient site of Viranşehir, Bozboyun Church and the Yardıbaş and Çukurkent Churches. Based on a legend, the mountain was named after Hasan, an old wise man. Some say he was a commander of Danishmends and fought on the side of the Seljuk Sultan of Rum Kılıj Arslan II against the Crusaders. Others say he was an awliya, or saint, who was living on the mountain all alone. He is also believed to be buried on the mountain, near a crater lake.

Combining climbing Mt. Hasan with a trek through the nearby Ihlara Valley adds joy to the trip. Less than 16 kilometers south of Cappadocia, the valley is unique with its ancient history and inhabitants. The whole canyon is honeycombed with rock-cut underground dwellings and churches from the Byzantine era. The Melendiz Stream flows through the valley as well. A number of historic churches are visible while trekking like the Yılanlı Church with its oriental influences and the Sümbüllü Church with its Byzantine character. Although almost impossible to see in the winter, vineyards, poplars and pistachio trees accompanied by the relaxing sound of rushing water surrounded by rich wildlife is what makes the valley worth seeing.