‘Tis the season to cough, sneeze and moan 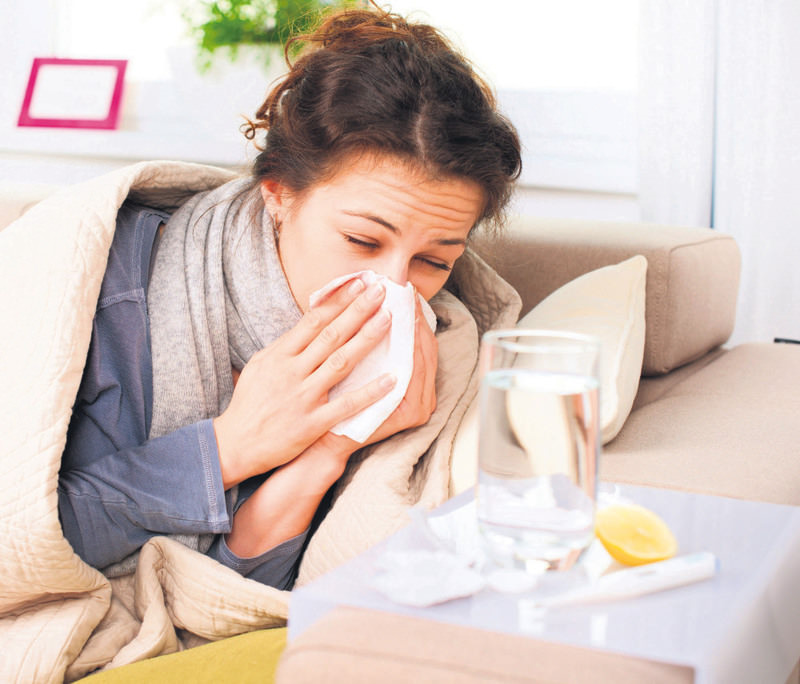 As the snows melt, the coughs and sneezes emerge. Turkey is a country where everyone has their favorite ‘old wives' remedies. Throughout the ages people have sought the best treatment for the common cold. A little research turns up some interesting approaches

Here it is, January in Istanbul. Per tradition, various members of the family are down with colds, sniffles and fevers. Running between boiling water for hot water bottles, or for making steam tents, or tea (with ginger and lemon and honey), turning up/down the thermostat, making chicken soup, turning up/down beds, fluffing pillows, getting out more blankets, I took a break. Sitting over a cup of tea (without ginger, lemon or honey) I recollected the stories my father would tell about how his mother and grandmother would treat his cough and sore throat.

If I remember correctly, they would heat up goose fat and smear it on a cloth. This would then be placed on the patient's chest. Pleasant while hot, the cold congealed fat was most unpleasant on the following morning. For a sore throat my grandmother and great-grandmother would heat up a mustard mixture, wrap it in another cloth and wind it (gently) around the throat. In the same way, this was pleasant when hot, but as it cooled became rather nasty.My husband's mother would put the cold sufferer in the room where there was a stove burning and hang the laundry. The moisture created by the wet cotton drying would give them relief.

What is the common cold? This affliction has quite fancy Latin names; I am sure if my doctor told me that I had a nasopharyngitis or a rhinopharyngitis, I would worry about how long I had left in this world.

But a cold is not fatal; it is basically a viral infection of the upper respiratory tract (thus affecting the nose and throat). The common cold usually lasts for about a week, while a stubborn cold can last up to three weeks.

There is no cure for the common cold; one of the problems is that there are more than 200 virus strains that cause a cold, and thus, prevention or cure is very difficult. Most medications or treatments for the common cold are designed to alleviate the symptoms rather than stop the cold's progress. My grandmother always used to say, "A cold will get better with medicine in a week; without medicine in seven days." Basically, she was right.

The cold is "common," as it is the most frequent illness that afflicts us. The average adult gets two to three colds a year, with children getting up to 12 colds. As far as we can determine, as long as people have been on the earth, the common cold has been with us. The ancient Egyptians recorded treatments for the cold in a text written more than 18 centuries ago.

The ancient Greek physician Hippocrates was of the opinion that colds were caused by a build-up of waste matter in the brain. So watching too much television could be a cause for the common cold? Something to consider...

The cold is such a serious problem that in the U.K. the Common Cold Unit was set upin the 1940s. This unit functioned for over 50 years, making headway into identifying the rhinoviruses that cause colds. But is it really a serious problem? People don't die from the cold (although they can die from complications of the cold). Seriously, the common cold should not be pooh-poohed. In the U.K. alone, the cold costs businesses over one million pounds every year in sick leave. People everywhere in the world spend millions of dollars/pounds/liras on cold remedies.

As I was making yet another batch of chicken soup, I started thinking: My father had these strange homemade remedies applied to him. What other weird and unusual remedies are out there? Do any have a basis in science? That is, do they work? Goose fat, when warm, is comforting, but does it help to get rid of the cold?

A little bit of research turns up some interesting approaches. When living in the Soviet Union, we were told that eating raw garlic was good for the common cold. Indeed, my research revealed that garlic has a lot of vitamins, and as deprived as we were of other fresh vegetables in the USSR, garlic was something that probably kept us going. As for preventing colds... if everyone eats raw garlic, you don't get close enough to catch the cold from others...

Gargling with vinegar (that would kill any bacteria in the throat, but make you have "salad breath") was another method to prevent or treat the cold.

Working from vinegar, alcohol is another proposed treatment. In the 1700s the author of "Domestic Medicine" told us, "Go to bed, hang your hat on the foot of the bed and continue to drink (alcohol) until you can see two hats." (After that you probably feel no more pain, so are "cured.")

Mrs. Beeton (one of my favorite cook book authors) stays in the same vein: "TO CURE A COLD. Put a large teacupful of linseed, with 1/4 lb. of sun raisins and 2 oz of stick liquorice, into 2 quarts of soft water, and let it simmer over a slow fire till reduced to one quart; add to it 1/4 lb of pounded sugar-candy, a tablespoonful of old rum, and a tablespoonful of the best white-wine vinegar, or lemon-juice. The rum and vinegar should be added as the decoction is taken; for, if they are put in at first, the whole soon becomes flat and less efficacious."

There are plenty more alcoholic remedies, but what is on offer for those of us who are teetotalers?

There is a cure that tells the cold-sufferer to soak their feet in hot water. After doing this and getting a nice toasty feel, they are to immediately put on a pair of thin socks that have been soaking in cold water. The patient is then to pull dry socks over the wet soaks and go to bed. It is thought that cold water increases circulation. I think the feeling of cold wet socks would inspire me not to stay in bed, but to get out and about, thus "curing" my cold.

There is a remedy that combines the goose grease and socks. But this time the socks must be dirty. After greasing the neck with chicken or goose lard, the patient is to wrap dirty socks around the neck. Once again, the warm grease probably gives the patient a warm fuzzy feeling, but I am at a loss as to what role the dirty socks play.

In the southwestern United States, goose/chicken fat is replaced with sheep fat. The implementation is the same; smear warm sheep fat on the chest and neck and wrap up warm.

One cure that Turks might find more appealing is chilies. Chili peppers contain capsaicin, which is an irritant. Anyone who has eaten hot chilies is familiar with the watering eyes and runny nose that ensues. So, it is only logical that hot spicy peppers are good for a cold. It has even been suggested that adding it to hot chocolate might be the ultimate cure.

Yes, the best cure I came across is hot cocoa. There is a substance called theobromine in cocoa, and British scientists have determined that it is more effective in suppressing coughs than codeine. (It has been suggested that the theobromine works on the Vagus nerve, which triggers that irritating cough.) Whether or not this is true, hot cocoa sounds like something I would be willing to try; much more than grease or cold socks.

Here in Turkey I have been told so often that I will get a cold if I don't have socks on or if I am not wrapped up warm enough. Despite my hardy British upbringing, where we go out in freezing temperatures with just a thin cardigan, I had heard this so often that I had begun to wonder if maybe there is something to this. However, I am relieved to find that the only way to catch a cold is by coming into contact with the virus. And it makes little difference if you are hot or cold. And you only become symptomatic 48 hours plus after coming into contact with the virus.

Some other interesting cures or preventions include eating an onion sandwich and washing your hair. I am not sure why you should wash your hair, but the result of the sandwich is clear. No one will approach you, and you stand much less chance of coming into contact with any cold virus.

There is a range of interesting cures for the cough that often accompanies a cold: Put cow dung in water and bring it to a boil. Then gargle the water three times a day. Your cough will pass (as may you). I think I won't be trying this one soon.

To treat a sore throat we are told to take a black thread, tie nine knots in it and wear it on your neck for nine days... Hmmm... Would brown thread do? My grandmother told me not to wear black after the age of 40.

But the treatment that kept turning up over and over again is chicken soup. The ancient Greeks and Romans recommended it. And there is a scientific basis to this. Chicken contains an amino acid, cysteine, which acts as a decongestant. In 2000, scientists at the University of Nebraska found that chicken soup inhibits inflammation, and thus helps relieve the worst symptoms of the cold.

So, what my research has revealed is put your socks back in the drawer, don't go hunting for goose fat, and avoid alcohol. Rather, drink fluids, including hot cocoa and plenty of chicken soup. Stay warm, rest and don't fill your brain with too much waste material. Geçmiş Olsun!
Last Update: Jan 09, 2016 10:32 am
RELATED TOPICS