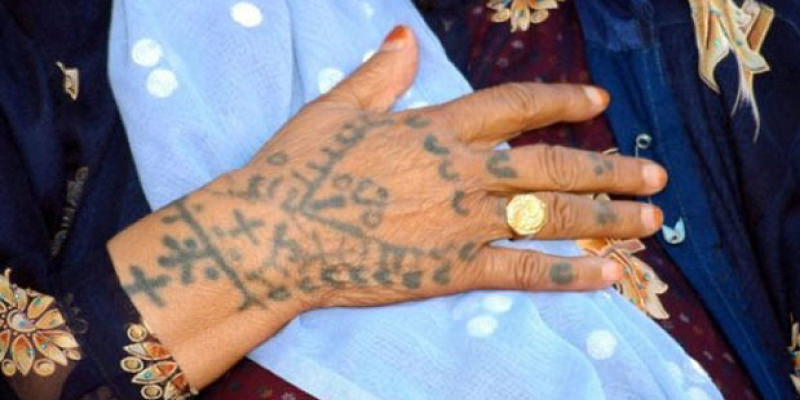 The art of adorning face and the body has a long history in many cultures around the world. ‘Deq' is one of the traditional but fading forms of tattoo art mostly seen in Turkey's southeastern region and some neighboring areas

Throughout history, tattoos have borne the mark of old belief systems such as paganism, shamanism and Zoroastrianism as well as other cultural practices. Dating back to the Neolithic ages, tattooing has different connotations in different cultures. A symbol of status or religious beliefs and regarded in some cultures as engravings on the human body for therapeutic reasons and the treatment of rheumatism or arthritis, the art of tattooing has evolved in terms of method and reason over thousands of years.

During a visit to Turkey's southeastern region; notably, to certain remote villages in the provinces of Mardin, Şanlıurfa and Diyarbakır as well as neighboring regions with densely Kurdish populations, the art of adorning the face and body with tattoos gracefully reveals itself. 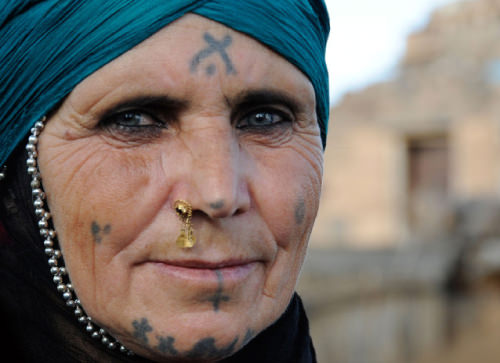 Older women have tattoos on their chins, hands, near their nostrils, on the forehead, neck, ankles and even breasts. Some tattoos are geometric shapes, while others look like stars, birds, the sun or the moon. These tattoos reflect the ancient tradition of "deq" (tattooing). Although it is a dying art, tattoos used to add beauty to a woman's face. Indeed, they can be considered as the diaries of women. Each symbol has a different meaning, emanating pleasure, hope, pain or fear from the human body.

Traditionally, tattoos are made by mixing the breast milk of a woman who has given birth to a girl with soot, or ashes. The reason behind using the breast milk of a girl's mother stems from the belief that the milk makes the tattoo permanent. Sometimes, the liquid from an animal's gallbladder is added to the mixture. In the first stage, an old woman draws the design on the skin and makes small holes using a sewing needle. The mixture is then spread over the design, penetrating the skin. Although "deq" is a very painful process for women, the tattoo lasts a lifetime. 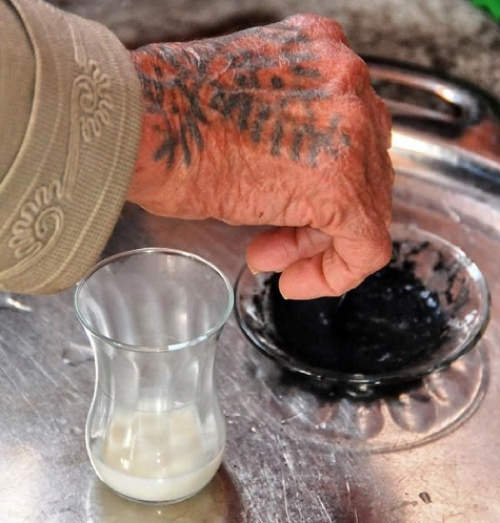 Deq is made by mixing the breast milk of a woman who has given birth to a girl with soot or ashes.

"Deq" symbols have different connotations but most of them are believed to protect women from evil forces. They are said to bring good health, cure illnesses and be associated with fertility and tribal affiliations. The figure of an eye is said to divert the evil eye, while an image of a gazelle brings luck. The figure of the sun or the moon refers to an endless and healthy life and an illustration of a millipede is associated with good housekeeping. For beautification, the figure of the moon or a star is preferred. The common "V" symbol is a tribal identifier. Certain geometrical figures or animal images refer to fertility. "Deq" is seen as an accessory, something that elderly women in Turkey's southeast proudly show. Jodi Hilton, an American photojournalist, visited Syrians who have been displaced by the DAESH siege and now live at refugee camps in Turkey. There, she documented some of the last-remaining tattooed women from the Syrian town of Kobani. "Some symbols from the old Kurdish religion of Yezidism, including sun, moon, stars and peacock, can be found in the tattoos," according to her website. Although facial tattoos were more common in the mid-1960s in the Kurdish regions of northern Syria, women refrain from "deq" not only because it is considered sac-religious but also because it is considered old-fashioned. "Nowadays, vestiges of the tradition can be found in the simple dots that sometimes mark a woman's forehead, nose or chin. The tattooed women of Kobani are living artifacts, providing us with a window into the past," she further notes. "I had seen them in Turkey amongst both Arabs and Kurds, especially in the province of Urfa, but it wasn't until the conflict in Kobane that I realized the tradition naturally extended across the border into Syria. On both sides of the border, people are connected by language, tribe and ethnic identity, so it makes sense that they also share other cultural attributes," Hilton said in an interview with National Geographic last year.

From the Girik village of Kobani, 70-year-old Safi Haso told Hilton, "We are probably the last generation that has tattoos. All Kurdish women had them," she further stated. Another woman from Kobani, Amina Saleh, 60, lives at a refugee camp in Suruç and had her face tattooed when she was about 10 years old. These days, "deq" is generally seen on women over 60, but younger women have temporary markings on their face for special occasions such as weddings. Some men also have "deq," mostly on their arms or hands.
RELATED TOPICS