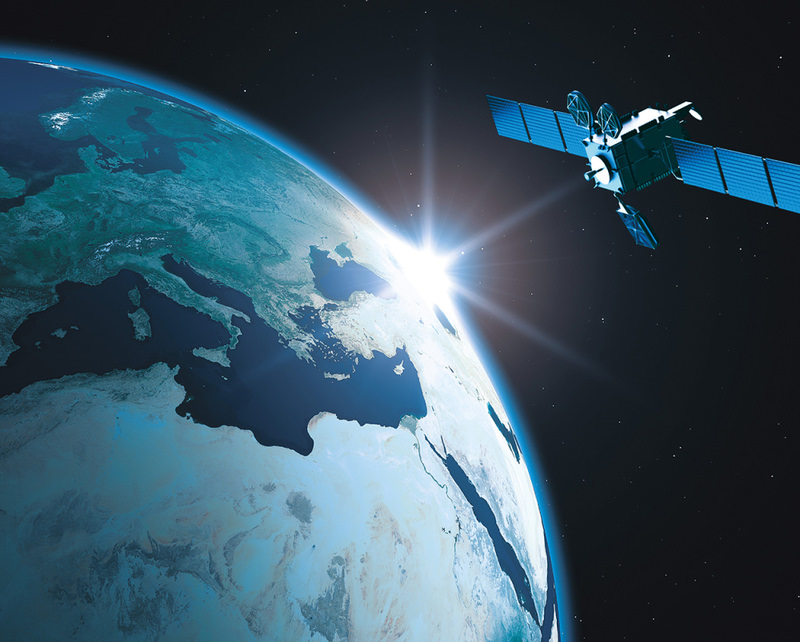 "What you launch into space is a small device weighing a few tons and measuring three square meters in size but if something happens to it, it is nothing but trash."

Turkey officially began the precarious journey of developing its own satellite in December 2014. Several companies signed a deal worth TL 550 million ($240 million) at that time, making the project the costliest research and development program in the country's history. A portion of that money - approximately TL 150 million - will come from the Turkish Scientific and Technological Research Council (TÜBİTAK), a government-mandated organization that funds such projects.

The Communication Ministry will foot the rest of the bill.

The satellite has been developed and manufactured under the leadership of TÜBİTAK in cooperation with Turkish Aerospace Industries (TAI), Military Electronic Industries (ASELSAN) and CTech, the only private firm in the consortium. Türksat, the country's satellite communications company, will own and operate the satellite. "The preliminary design process has ended. We plan to complete the satellite in 2019 and launch it in 2020," Türksat's Ensar Gul told Anadolu Agency (AA).

He stressed how crucial it is for Turkey to develop a satellite using nationally derived resources: "Design and software [used in the project] will be domestically produced."

Despite the risky nature of space projects, Turkey started its journey in 1994 with its first satellite, Türksat 1A, constructed by French firm, Aerospatiale.

Stressing these successful steps, Zahit Mevlütoğlu, professor of space engineering at Istanbul Technical University, told Anadolu Agency (AA) that "Turkey has developed the know-how to build its own satellites."

On top of this, last May Turkey opened its first satellite assembly and test center. The 3,800-square-meter center will be capable of testing satellites up to 5 tons in weight, Turkish Aerospace Industries said.

The center is considered part of Turkish efforts to break into the international space industry. The production of Türksat 6A will be conducted there. After these remarkable steps, experts also stress the strategic nature of developing a domestic satellite.

"It is vital for Turkey to acquire that technology," Mevlütoğlu says.

Acknowledging that there are only few countries with the capabilities to produce satellites, Ensar Gül notes: "You develop a craft that can work on its own in space for 15 to 20 years." Gul stated that Turkey would eventually have its own satellite platform, based on a domestic design:

"[Countries] develop their own platforms and use the same design for future programs. From that perspective, it is difficult to construct this satellite for the first time," Gül said.

Rüstem Alan, professor of aeronautical engineering at Istanbul Technical University, said this was a typical approach: "The crucial matter is to design your satellite," Alan told the Anadolu Agency (AA).

CTech, for example, is tasked with producing a telemetry command and ranging system (TCR) that will connect the satellite to the ground control station once in orbit.

"Without that part, the ground control cannot know where the satellite is and cannot control it," Firat says. However, this part will be bought from other companies after a bidding process is completed, since all space projects require this part to be "space tested." Extreme conditions in space demand robust testing.

The satellite can be exposed to blistering heat of +150 Celsius while other parts of the same craft could be subjected to freezing cold temperatures of -80 degrees Celsius or less - experiencing both extremes in a short period.

Electronic components function differently in space when compared to their performance on Earth, according to experts.

CTech will still develop its own TCR part for experimental purposes so that the domestic technology can be tested in space for future use. In order to develop this domestic TCR module, the firm has employed 15 people. "CTech will be responsible for all these TCR parts," Firat says. Prof. Alan says that, thanks to the Türksat 6A project, Turkey will acquire the ability to produce its own satellite and have a chance to enter the competitive communication-satellite market. "The marketization of the satellite program will take time. Primarily, this program is a strategic step," Fırat warned, adding that it is still profitable for Turkey to have the ability to produce its own satellite.

Turkey orders a communication satellite every three to four years. Domestic design has the potential to save Turkey from being dependent on foreign countries and eliminating foreign expenditures. Turkey's involvement in space programs has paved the way for Turks to develop a knowledge base and train aeronautic engineers. However, experts stressed that Turkey needs to do more to contribute to space programs, including establishing a space agency to accelerate and direct these projects.

"Further steps require Turkey to provide education to individuals for potential space programs. This is the biggest problem. Money would not be enough [for future programs]," Fırat said. Alan says that there has been a coordination problem in the industry: "We need a space agency," he adds.

Similarly, Fırat urged the authorities to set up a space agency conducive to fast-track space projects, adding that Turkey also requires well-educated experts and technological sophistication. "[Between] 200 and 300 people have participated in this project. These are people that have previously worked on space projects in Turkey. There is no one else," he stressed.

However, it is unlikely that the state will recruit foreigners for such projects; likely due to the sensitive nature of space programs.

As a company, CTech has stepped up its involvement in space projects since 2008 by consulting with the Japanese manufacturing giant, Mitsubishi. Years of tireless efforts have put the company at the heart of Turkey's first communication satellite project.

Firat sees this involvement as a second beginning for his technical firm. "Türksat 6A is not a result but rather the beginning of the second stage," he commented. The same, it seems, goes for Turkey as well.
RELATED TOPICS