Terror Shall Not Prevail 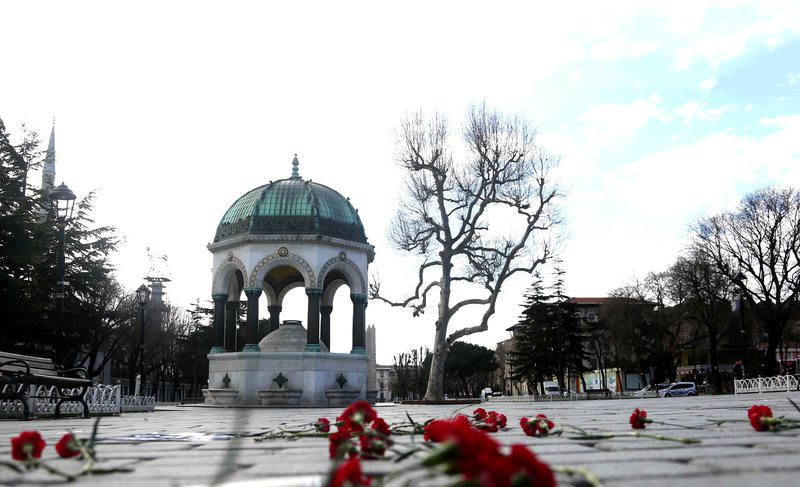 DAESH uses terror to create distrust and fear. But as time progresses, it seems that this tactic is failing. This week there were two terrible attacks in Muslim-majority Turkey and Indonesia

On Tuesday a terrible tragedy struck Istanbul. Following attacks on Suruç, Ankara, Paris, Beirut and Tunisia, and followed on its heels by the bombing in Jakarta, this latest heinous DAESH attack targeted the heart of historical Istanbul.

Any loss of life is tragic. The monstrous murder of innocent tourists who were taking in the historical atmosphere of Sultanahmet on a sunny January morning is not something that can be forgiven.

However, if this was an evil plan by DAES to strike the tourist industry in Turkey, it was a failed attempt. One Norwegian tourist who was injured in the attack said that he would like to return to Turkey one day and revisit the Blue Mosque. 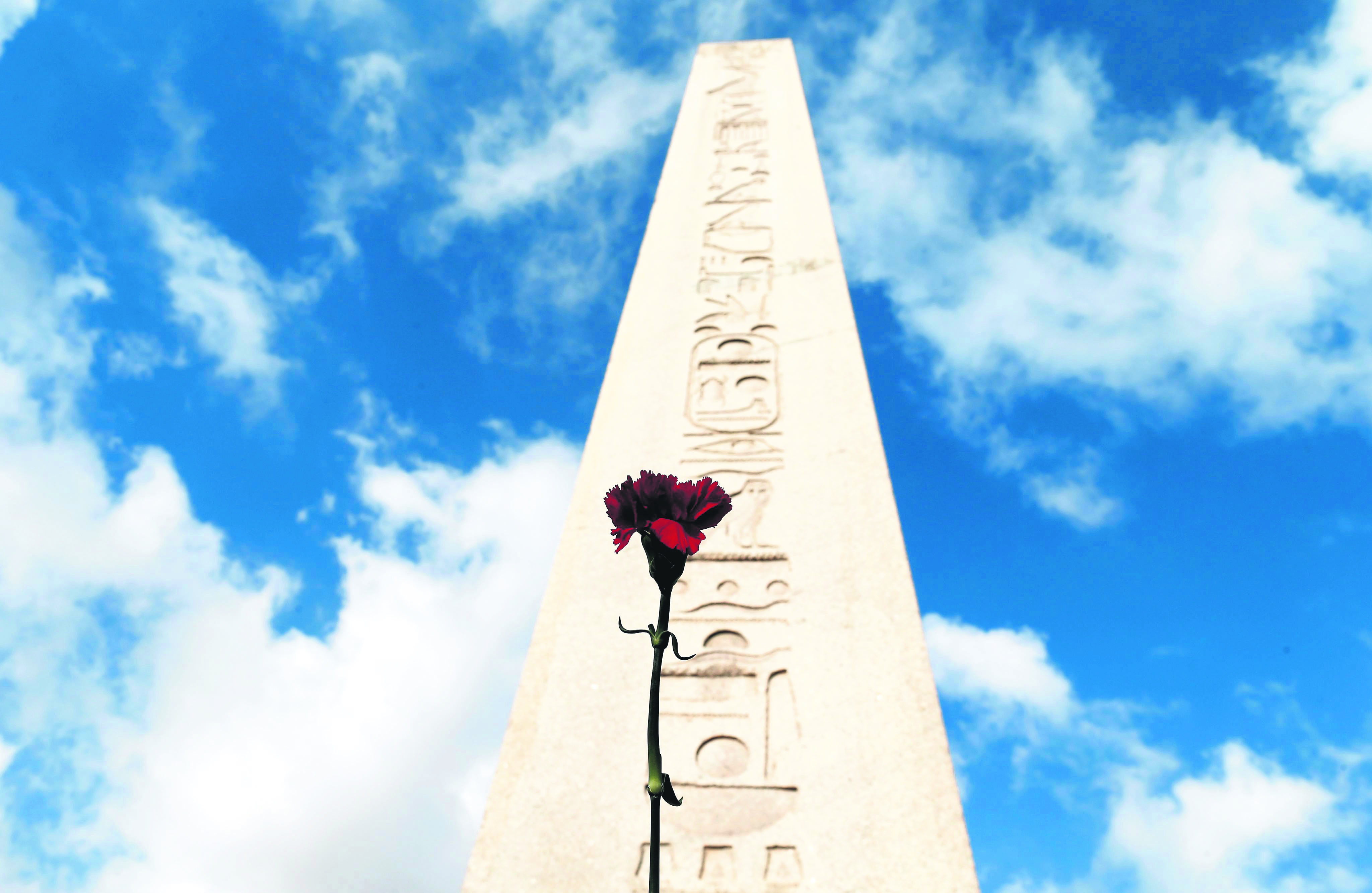 A lone rose pictured against the obelisk as Turkish tourist guides rally in tribute at the scene of a suicide bombing in Sultanahmet Square, home to the Hagia Sophia museum and the Blue Mosque.

This attack may have been carrying other messages, as it is likely that an attack on the historical heart of Istanbul was intended to strike at the tradition of understanding, dialogue and communal understanding that has always existed in this city.

The area in which the bomb attack took place was adjacent to the Sultan Ahmet mosque near the Hippodrome and the German Fountain.

This is an area in which mosques, churches and synagogues are located next to each other. The Hagia Sophia, originally the main church of Christian Orthodoxy, was converted into a mosque when the city was conquered by Sultan Mehmet II. Later the building was converted into museum, open to all, a testament to the history of the city.

The Hippodrome was a race track, and was the center for horse and chariot races. When renovated by Constantine the Great, the Hippodrome could hold up to 100,000 people. This area was the center of the city, and the chariot races held there were the highlights of Byzantine social life. The teams that raced were supported by different political factions and supporters were as keen as any modern-day football supporter.

The Hippodrome was in ruins by the time the Ottomans conquered the city, as the city had never really recovered after being sacked during the Fourth Crusade. The Ottomans never built over or renovated the Hippodrome. It was the site of many celebrations during the Ottoman era, and was used for "jirit," a javelin-like throwing game played on horseback, and military exercises.

Today visitors to the Hippodrome can see three columns standing there - the Obelisk of Theodosius, the Serpentine Column and the Walled Obelisk. These monuments were brought to the city by Constantine and subsequent Byzantine emperors and set up in the middle of the Hippodrome. The Serpentine Column (Tripod of Plataea) was originally cast to commemorate the victory of the Greeks over the Persians in the fifth century B.C. Constantine ordered that it be moved from Delphi to Constantinople. The original column had three serpents, supporting a bowl on their heads, but the bowl was destroyed during the fourth crusade and the serpents became lost over time. Parts of the serpent heads can still be seen today in the Istanbul Archeology Museum.

Theodosius the Great had the monument known as the Obelisk of Theodosius brought to the city from Luxor in Egypt. It had originally been erected in Egypt around 1500 B.C. To bring it to Constantinople, Theodosius had the obelisk cut up into three sections, and it is the top section that can still be seen today.

The Walled Obelisk was built by Emperor Constantine Porphyrogenitus. The original was covered with gilded bronze plaques, which were looted during the fourth crusade.

Just outside the Hippodrome stands the German Fountain. This was built in Germany, and then the parts were shipped to Constantinople by Wilhelm II in 1900. Originally designed to be opened in commemoration of Sultan Abdülhamid's birthday, the opening was delayed. The fountain was opened to commemorate Wilhelm's visit to the city. However, this fountain in reality symbolizes neither a birthday nor a visit, rather it is the friendship that existed between the Ottomans and the Germans.

There are many stories behind this fountain, but it is the eight monograms that are significant today. Four of the medallions include the seal of Abdülhamid II on a green background - traditionally the color to represent Islam -while the other four have a W on a Prussian blue background. The interior of the dome has symbols of both Abdülhamid II and Wilhelm II.

This friendship was the result of Abdülhamid reaching out to the West, to try to build new alliances, learn and grow with the West. The relationship between Germany and Turkey has not always been easy, but it is one that has deep roots.

Thus the Hippodrome is an area in which the deep history and cultural wealth of the city of Istanbul is on display for all to see. It is this history and wealth that DAESH is targeting, it is relationships like that displayed on the fountain that they are trying to tear apart. In France, the target was a multiethnic community, as DAESH trying to turn society against Muslims and recent immigrants to tear it apart. In Tunis, DAESH targeted tourism. In Ankara, they targeted the Kurdish population, trying to drive a wedge between them and the Turkish majority.

Terrorism cannot be measured in the number of lives taken or the destruction inflicted. The target of terrorism is greater. Terrorism aims to create an atmosphere of distrust, a reign of fear. But people, be they in Ankara, Paris, Istanbul or Jakarta, have decided that they will not let this terror take over their lives. DAESH will only succeed if they allow us to mistrust one another, to fear the other, or to cower in fear of the next attack. Only by standing together, whether we are Turks, Kurds, Europeans, Muslims or non-Muslims, can we defeat DAESH. It is our unity that they fear.
RELATED TOPICS