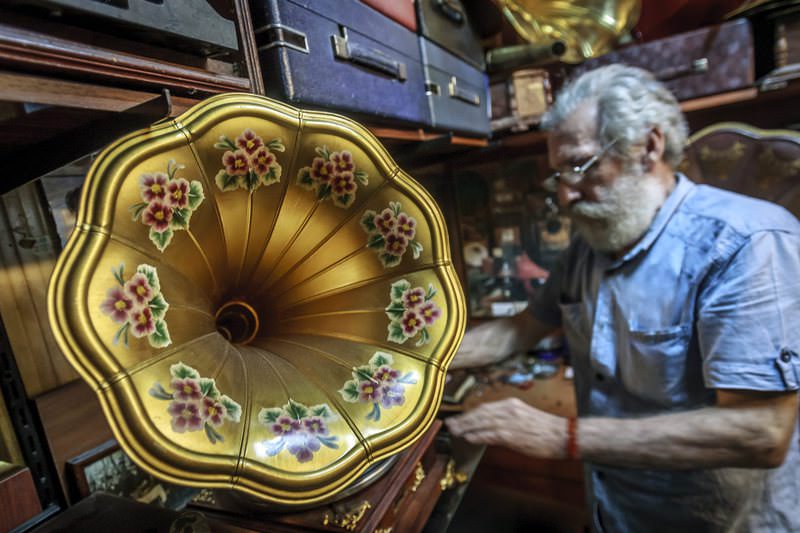 Known as ‘Papa Gramophone,' Mehmet Öztekin has dedicated his life to repairing and producing gramophones at the Grand Bazaar. After entering the bazaar from the Nuriosmaniye gate, visitors have heard the sound of old records coming out of his small shop for years

Most tourists cannot leave Istanbul without visiting the Grand Bazaar, right? People who are eager to find treasures in souvenier shops can easily get lost while wandering around the city's oldest covered market that attracts up to 400,000 visitors daily. After entering the Grand Bazaar from the Nuriosmaniye gate and heading toward the silversmiths section, you will meet "Gramofon Baba" (Papa Gramophone), one of the bazaar's most colorful personalities and presumably Istanbul's last gramophone repairman.

Dedicating his entire life to gramophones, Mehmet Öztekin, 74, has continued his career as a gramophone repairman for the last 60 years. A scratchy voice resonates from his shop, be it a song from late singer Müzeyyen Senar or the Turkish classical composer, Dede Efendi. Inheriting the trade from his father, Öztekin never tires from repairing gramophones and listening to records every day. He says the unique musical instrument has become an indispensable part of his life. In his tiny space, dozens of gramophones are waiting to find a new life in Öztekin's skilled hands. Some have a broken winding mechanism, while some others have broken needles. Abandoned by their listeners, these gramophones found their home at this shop. 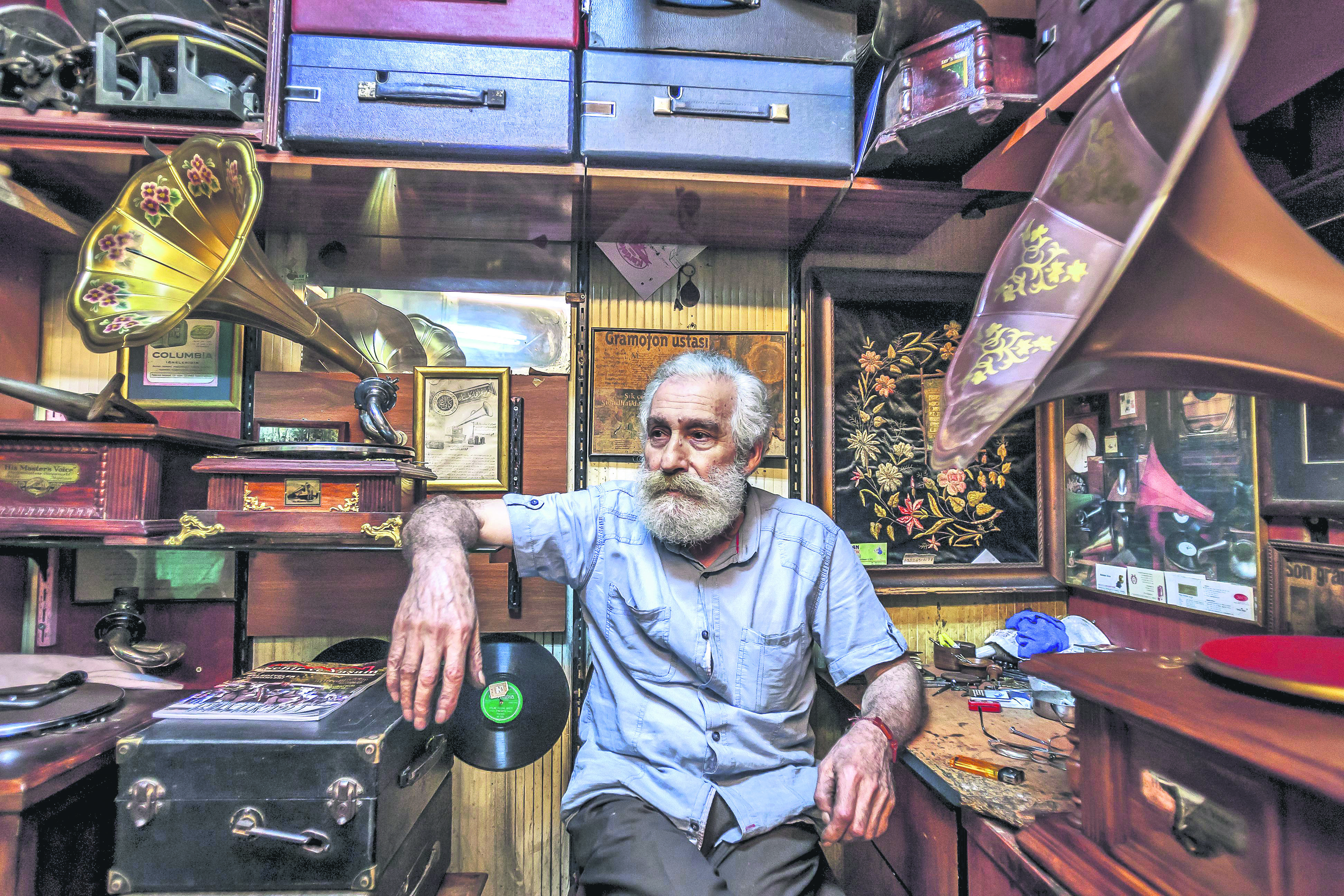 Describing himself as a slave to old gramophones, Öztekin said: "I preserved them for the present, and passionately took care of them." Among the Grand Bazaar staff, he is known as Papa Gramophone, the person that exerted great effort to keep them alive. "I was helping my father as his apprentice, and this is how I got involved in this profession. Once gramophones were highly precious; I was not even allowed to touch them, only assist with the tools," Öztekin said. He added that years ago, not many homes had gramophones, which he indicated has added to their value.

He also criticized the fading relationship between the master and apprentice. "This makes me feel melancholic. If you do not train an apprentice, then how will new masters emerge? I have two apprentices and people that were inspired by my life. There are also some who are now dedicated collectors," Öztekin added. He stressed that many gramophone repairers became unemployed over time because interest waned in the instrument. 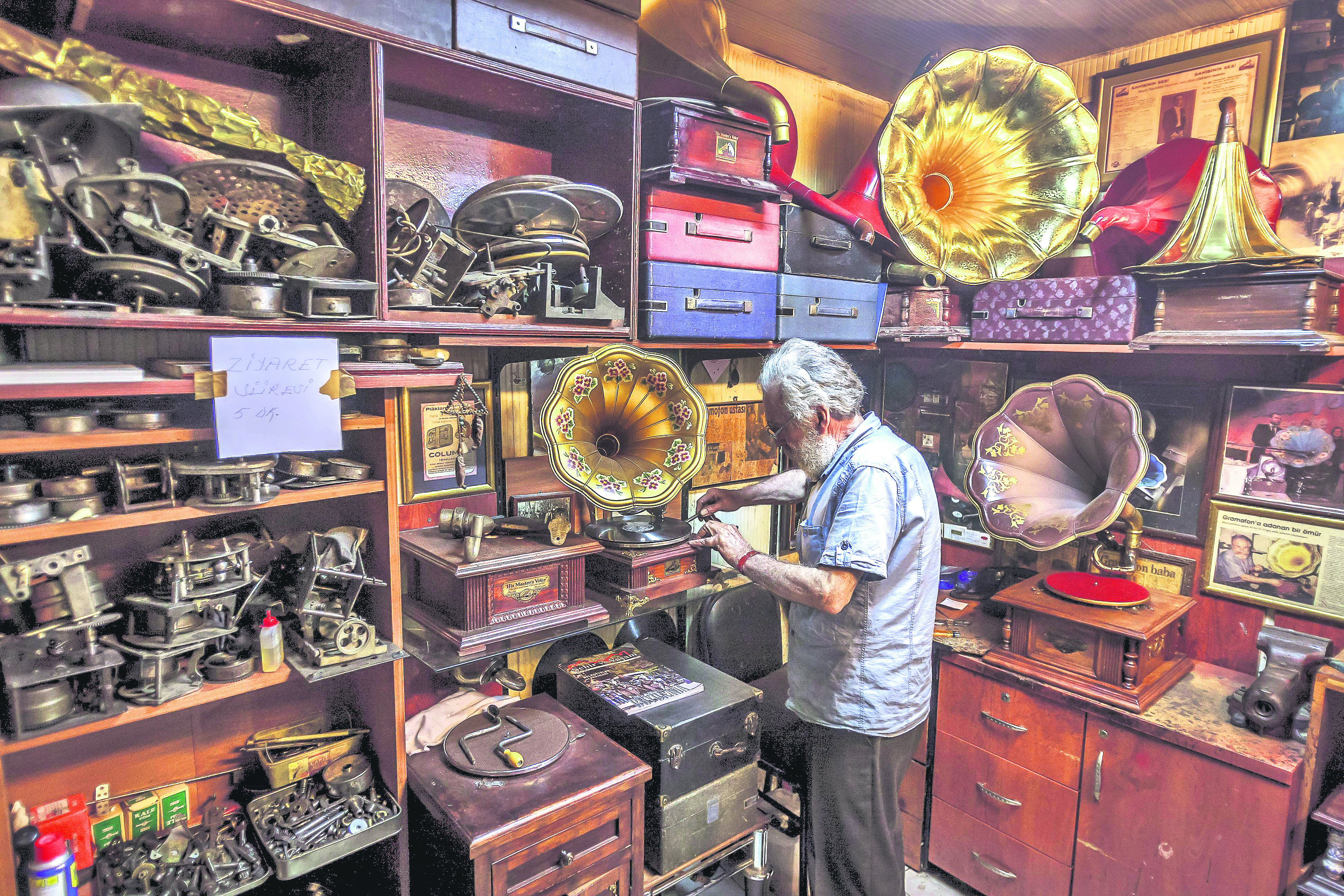 Öztekin said that gramophones lost their popularity over the years. "Gramophones were placed in attics after LPs, tapes and cassette players came out. Now, young people are working to find records or gramophones at antique shops. I believe that older people, mostly over 40, should be interested in gramophones because they have memories with them. However, the young generation shows interest as well," he said.

While making gramophones, Öztekin does not prioritize commercial value. "When I repair a gramophone, I ask the owner to play it. I also ask them to keep the records safe. Gramophone enthusiasm is a culture, something that needs to be transferred to the future generation," he stressed.

Compared to CDs and DVDs, gramophones generate more natural sound, Öztekin said. Recalling late Turkish artists such as Münir Nurettin, Safiye Ayla, Müzeyyen Senar, Hamiyet Yüceses and Mualla Mukadder, he said people used to listen to these singers on gramophones. "When the society's demand changes, the supply also changes. This is why I have struggled a lot," he added. "People can compare the past with the advancing technology as long as these records are played," Öztürk said, after spending hours repairing a gramophone.

The Papa Gramophone recommends those interested to do thorough research before buying an antique gramophone. Engin Akgüloğlu, one of his regular customers, said his interest in gramophones started when he was a young boy. Bringing along the gramophone he inherited from his grandfather, he said: "After I saw gramophones at Öztekin's shop, I recognized their beauty. He repaired the gramophone, as I just want to hear its sound."
RELATED TOPICS