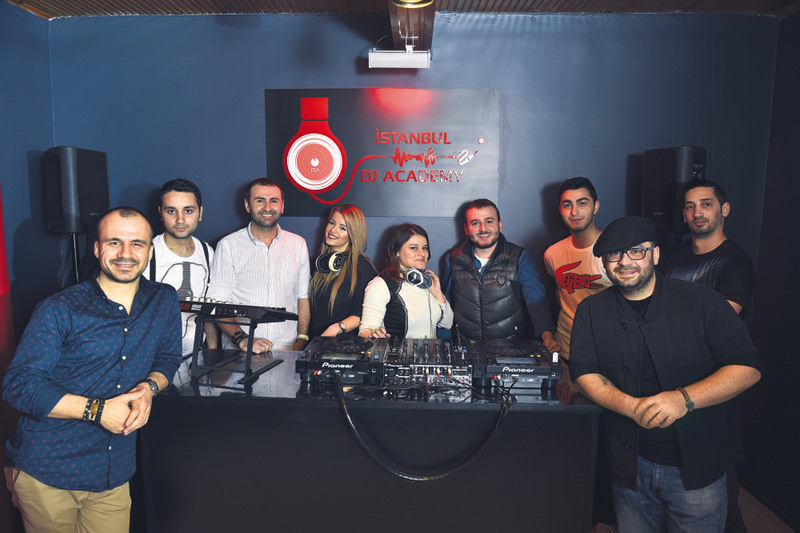 DJs shape today's music industry, while inspiring others to follow suit. Two DJs run the Istanbul DJ Academy in Istanbul's Sarıyer district where people from different professions attend classes and fall under the spell of the turntables

With millions of fans, DJs are the newest rock stars, shaping the music industry and earning up to 500,000 euros an hour. The number of people who want to join the industry as DJs is on the rise, and, fittingly, DJs Serdar Ayyıldız and Selami Bilgiç decided to open a school for aspiring DJs.

While their incomes vary, DJs in Turkey earn up to TL 25,000. The potential for fame and wealth in the field is drawing the attention of music lovers and aspiring rock stars, and inspired two DJs, Ayyıldız and Bilgiç, to open the Istanbul DJ Academy in the district of Sarıyer where they pass on their years of experience to their students.

Ayyıldız says that they teach both manners and techniques to their students and that the demand for their services is extremely high. DJ Ayyıldız, who has been in the business for the past 20 years, is excited about this initiative. "A singer usually has a team of 30 to 40 people at a concert. However, no one wants such a crowded team accompanying him or her to concerts. People prefer a DJ who can complete the job in two to four hours. Further, DJs don't just play at nightclubs. Offers are coming in from different venues such as weddings and exhibitions," said Ayyıldız. He added that this has become a new profession in the last five years in Turkey and that there is still a serious need for qualified DJs; therefore, they wanted to teach students to fill this void.

Ayyıldız, who claims that Istanbul DJ Academy is the biggest DJ school in Europe, is also confident in their technical equipment.

DJ Bilgiç stated that students would be able to perform as DJs after three months. Granted, the constant technological advances in the industry mean there is always room for improvement, and he has been improving himself for the past 19 years. Thus, his academy aims to encourage students to foster a mentality of constant growth after graduation.

There are two types of instruction offered at the Istanbul DJ Academy. Those who are looking to become a professional DJ can receive formal instruction, while others who are interested in pursuing the career as a hobby can also attend the academy. Ayyıldız noted that the students were diverse and that they have students who are housewives, CEOs, managers, doctors, bankers and retirees. "Both young people and people in their 50s are interested in these classes. Those who were interested in taking courses previously but couldn't find time due to their careers are also attending our academy," says Ayyıldız.

Candidate DJs first receive lessons on theoretical information; then, they start playing a DJ set in the studio with observation training and learn the technicalities of the profession. Bilgiç noted that there is always excitement in the studio as students take the DJ controls. "Sometimes, we clap or beat time so the student can feel like they are playing to a crow and experience that atmosphere. Sometimes we take our students to clubs so they can feel the atmosphere of being a DJ," says Bilgiç.

One of the students, Serhat Duran, 33, a businessmen and rally pilot, notes that he was a good listener at first, gradually developing his skills and finally deciding to enroll in professional training. "I wanted to be able to control the music as a DJ instead of just dancing near the DJ box. I'm taking lessons to improve my skills, and then I'll take production lessons," says Duran.

Serpil Şeker, 27, a translator, attended classes because she is mesmerized by the transitions of DJs between songs.

Professional DJ Aytaç Arlan, 23 took production lessons and says that there is nothing like having a job you love and that his friends have also been inspired by him to become DJs. "I want to make an internationally renowned name for myself, for my arrangements, not just remixes," says Arlan. Yiğit Mendeş, 20, who works in the same department of Business Administration at Marmara University, is an electronic music fan. A famous DJ, Martin Garrix, like millions of others, is one of his idols. "Electronic music releases your suppressed feelings, allowing you to feel free. You become energetic and active. We are turning our hobby into a profession," says Mendeş.

Ceysu Yetkin, 22, decided to follow her dreams after she graduated from the business administration department of a private university. "I gathered the courage to become a DJ, my childhood dream, after I graduated. I want to go all the way and since there are very few female DJs in the industry, I will strive to become one of the most successful," says Yetkin, adding that being a DJ is about how young and energetic you feel.

Twenty-six-year-old Doğa Saygun, who received training from DJ Ayyıldız years ago, has been working as a DJ at a cafe for the past five years. He registered with the school to compose his own songs. "You become someone else and feel free when you DJ. Now, the interest in electronic music is also increasing. I just want to create my own music. Creating something is such a unique feeling. I want to attend worldwide festivals and perform my own style before crowds," says Saygun.
RELATED TOPICS