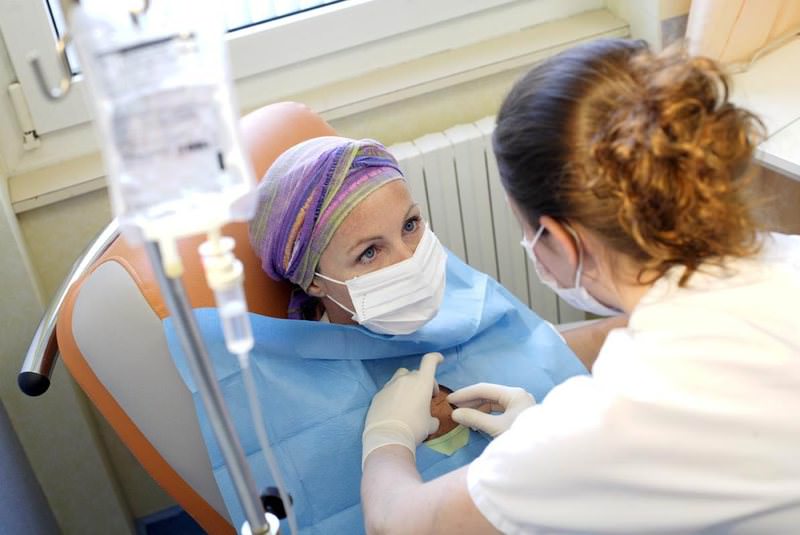 Thursday will mark World Cancer Day to encourage its prevention and treatment. A number of studies both at home and abroad are being conducted to find new ways to avoid the growth of cancer cells such as through genetic cancer maps. Lung and prostate cancer are the two most common cancer types among Turkish men while breast cancer is the most fatal for women

In 2012, Academy Award-winning actor Michael Douglas revealed his battle against throat cancer saying: "Cancer didn't bring me to my knees, it brought me to my feet."

The struggle against this illness is, for many people, a battle to maintain hope in the fact of a chilling diagnosis.

Ahead of World Cancer Day on Feb. 4, Anadolu Agency (AA) spoke with doctors and researchers who are working on new treatments to help the millions of people who, every year, must live with cancer. In Turkey, although cancer continues to claim many lives and devastate families, new treatment methods and medicines are being applied to treat it or at least extend the lifespans of cancer sufferers.

Lung and prostate cancer are the leading causes of cancer-related deaths among men in Turkey, while breast cancer is the most common type of fatal cancer among women in Turkey, according to latest data from the Health Ministry. Moreover, one male cancer patient out of five suffers from lung cancer.

Overall, Turkey largely fits in with the globally reported instances of cancer. The most commonly diagnosed cancers worldwide were those of the lung cancer (1.8 million, 13 percent of total diagnoses), breast cancer (1.7 million, 11.9 percent) and colorectal cancer (1.4 million, 9.7 percent), according to the International Agency for Research on Cancer (IARC)'s online database, GLOBOCAN 2012. GLOBOCAN 2012 revealed that the most common causes of death by cancer were those of the lung (1.6 million, 19.4 percent), liver (0.8 million, 9.1 percent) and stomach (0.7 million, 8.8 percent).

Professor Canfeza Sezgin, a medical oncology and internal medicine specialist in Istanbul, told AA that new ways are being developed to prevent the growth of cancer cells by exploring the human genetic cancer maps. This has led to improved molecular drugs - so-called smart medicines, he said. According to Sezgin, these smart medicines directly target cancer cells, killing and preventing growth and potentially increasing the average lifetime of patients by about 30-40 percent from the initial diagnosis. Older treatments like chemotherapy and radiotherapy are not ideal or "smart" any more, as these methods also kill healthy cells. "In our country, smart medicines have been used for about four or five years," Sezgin said, adding that such treatments can be used alone or with chemotherapy. "We are conducting genetic tests on patients to determine their cancer's characteristics and looking at whether it is suitable for smart medicines. If it is, their life expectancy can be doubled," Sezgin said.

He also talked about causes of cancer and said environmental factors are the main factor in developing lung cancer - the most prevalent kind in Turkish males. "Genetic factors affect only 10 to 15 percent of lung cancer patients. Environmental factors have more of an effect, especially a bad diet, alcohol, smoking, stress and depression," he said.

Prostate cancer is also common in Turkey. "A prostate cancer patient can be treated with sound waves without any pain and bleeding, then they can return to their normal life," said Dr. Hüseyin Lüleci, a urologist who is also a regular on national television. Lüleci - who is also the head of Turkey's Prostate Cancer Association - said with the new method, people can undergo a procedure with high-frequency sound waves that directly targets tumors. He added that patients are often unaware of the disease because prostate cancer has relatively few symptoms, but a minute-long examination can easily detect the illness. "People should have a check-up between the ages of 45-50 if there is prostate cancer in their families," he said, adding that a 50-year-old patient has a greater chance of treating the illness than people between the ages of 65 and 70. Lüleci also said genetic factors were more of a factor than environmental factors in developing the condition.

In Turkey, one out of four female cancer patients suffers from breast cancer. A total of 17,630 women were diagnosed with the disease in 2012, according to Health Ministry statistics.

According to the American Cancer Society's website, new treatments that could catch breast cancer early on are being studied and tested by scientists. Molecular breast imaging - also known as scintimammography - sees a radioactive tracer injected into a vein, attaches itself to breast cancer cells and can be detected with a special camera. However, this method is still being studied to see if it will be useful in finding breast cancers. Under the description "targeted therapies," one group of drugs also takes advantage of gene changes in cells that can cause cancer. Some drugs currently in use target HER2, a gene that can play a role in the development of breast cancer. Professor Vahit Özmen, honorary president and founder of the Breast Health Society in Istanbul, told AA: "Some drugs help destroy tumors in 50-60 percent of patients who have locally advanced breast cancer." Regarding the causes of the disease, Özmen said hormones seem to play a major role in breast cancer. A bad diet - especially one high in red meat and animal fat - and drinking alcohol are also risk factors in developing the illness.

According to the 2012 Health Ministry report, every year about 105,000 men and 71,000 women are diagnosed with various cancers. Projections based on the GLOBOCAN 2012 estimates a substantive increase to 19.3 million new cancer cases per year by 2025, due to an increased global population that is living longer on average. More than half of all cancers (56.8 percent) and cancer deaths (64.9 percent) in 2012 occurred in less-developed regions of the world, and these proportions could further increase by 2025, GLOBOCAN 2012 data suggests.
RELATED TOPICS