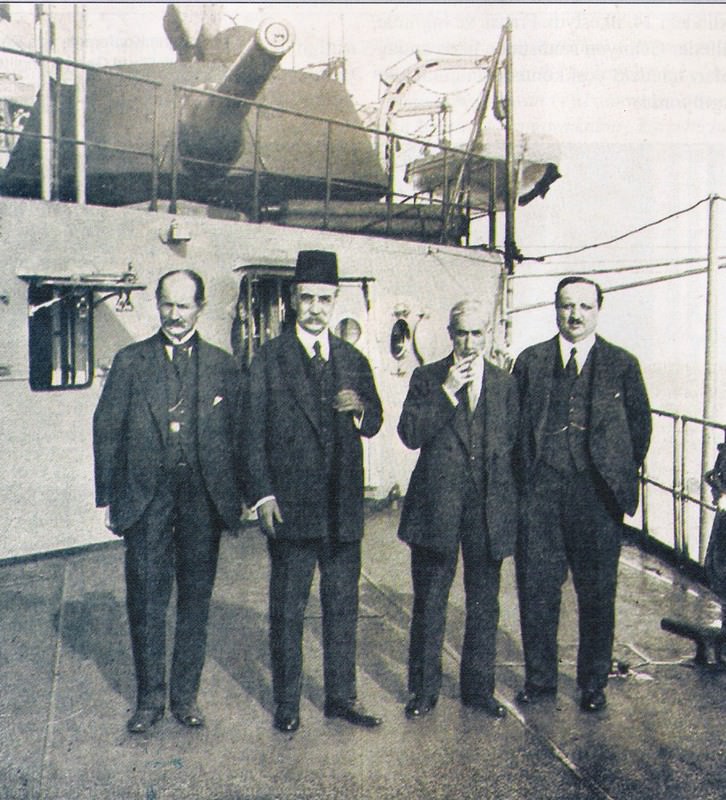 Two figures in recent French history, the Minister of Foreign Affairs Charles-Maurice de Talleyrand-Perigord, and police Captain Joseph Fouche, served during the monarchy, revolution, consulate, empire and reconstruction of the monarchy, as in the phrase "a man for all seasons." However, not everyone is like them. Each newly constructed regime brutally discharges the men of the previous regime.

In the Treaty of Lausanne, which diplomatically recognized Ankara in the international arena and marked the end of the Ottoman Empire, the Turkish convoy promised to grant a general amnesty to the people who served during the monarchy, but, they asked for the exception of 150 people, and the Allies agreed. Many people who were against the regime were already suppressed through the Independence Tribunals that were established in 1920. Hereafter, journalists and academics who dared to oppose Ankara were taken care of between 1925 and 1931.

Two general amnesties were granted on Nov. 26, 1923 and April 16, 1924. A list was prepared for 150 people who were excluded from the general amnesty, which was granted as a part of the Treaty of Lausanne. A list prepared by the police, which included 600 people, was reduced to 300 by the Interior Ministry and again reduced by half by the Cabinet. The list was discussed in a secret session at Parliament. There was no certain criterion; appearing at the palace at some point was enough for some. Much effort was made in order to come up with the 150 names, which was a number randomly declared in Lausanne, but only 149 could be found. President Mustafa Kemal Atatürk identified the last unlucky person: Refet, who was the owner of the newspaper "Köylü" (The Villager).

Hence, 150 people were chosen to be expatriated with a Ministerial Cabinet decree on June 1, 1924. Among these figures were people who were genuine opponents to Ankara, as well as people whose names were written on the list just to fill the gaps. Most of them were wretched people who had no other sin but to be loyal to the administration they accepted as legitimate from their upbringing. While those who signed the Treaty of Sevres were exiled, Rauf Orbay, who signed the Armistice of Mudros that led to the occupation of Anatolia, held a well-esteemed office in Ankara. There was not a single non-Muslim on the list because İsmet İnönü promised then Greek Prime Minister, Sofoklis Venizelos in Lausanne, that there would be no non-Muslim on the list.

The list had eight people from the attendance of Sultan Mehmed VI, six ministers of the monarchy, seven members of the military force that was established with the support of the British in order to suppress the Ankara movement, three people from the delegation that signed the Treaty of Sevres, 32 bureaucrats and military officers who served during the monarchy, Çerkes Edhem and 26 of his men who served Ankara to suppress the revolts in Asia Minor, but were declared rebels when they did not get under İnönü's command, 13 police officers, 13 journalists and 41 villagers. When the decree for the exile was issued, 90 of these people had already fled abroad.

Among the most famous names on the list were Shayk-al Islam Mustafa Sabri Efendi, one of the biggest scholars of the late Ottoman era, prominent poet Rıza Tevfik, Refik Halid Karay, the unprecedented representative of prose literature, journalist Refi Cevat Ulunay, journalist and the vizier's aide-de-camp Tarık Mümtaz Göztepe, journalist Mevlanzade Rıfat and intelligence officer Kuşçubaşı Eşref. Most of the exiled people left their families behind and went to Constanza, Western Thrace, Iraq, Egypt, Beirut or France.

These 150 personae non gratae lived in misery because they lost their wealth and were unable to contact their homeland. The prestigious ministers, religious scholars, pashas and officers were reduced to begging and some found themselves in hospitals for mental illness. To avoid being at odds with the government in Ankara, certain foreign states refused to take them. More than 20 exiled officers settled in Western Thrace. Some of them worked as teachers while some others continued political and religious activities by publishing newspapers.

Sabri Efendi was writing in the newspaper Yarın, which was published in Xanthi and criticized the government as much as possible. Upon this, he was dismissed following an agreement between Atatürk and Elefterios Venizelos in 1927.

Poet Rıza Tevfik worked as a museum manager in Amman. Novelist Refik Halid Karay continued writing during his years in exile. He wrote the book "Gurbet Hikayeleri" (Exile Stories) at that time. Interior Minister Mehmed Ali Bey, who sent Atatürk to Anatolia, was publishing a newspaper called La Republique Enchaine in Paris, criticizing the Ankara government. It was rumored that he used to telegraph insulting words to Atatürk on every anniversary of the founding of the Republic of Turkey. Some exiled officers, on the other hand, praised the government in their articles with hopes for a pardon. Even if both favorable and unfavorable views emerged in Turkey, the 150 personae non gratae were pardoned with the law dated June 29, 1938 by the government under Prime Minister Celal Bayar.

The decision was surprising, while the innocent members of the Ottoman dynasty languished in exile. This action meant that the dynasty was a bigger threat to the new regime. President İnönü and his team rejected the law and did not participate in negotiations. The law specified that the officers who were pardoned could not receive retirement pay or be employed in state institutions for eight years. When the law was put into force, half of the exiled officers were alive. Some returned to Turkey, while others like Mustafa Sabri Efendi, refused to return, as they thought that their homeland was not the same after they left.

An old man loyal to the old regime went to welcome some of the 150 personae non gratae at the harbor and reportedly said: "This is a matter of conscience for me. In reality, however, they are undignified. If I were one of them, I would have not returned."

Upon the abolition of the Ottoman sultanate in 1922, commissioned officers, shahzades and son-in-laws from the dynasty were dismissed from military service without any reason or retirements. A law was passed on May 26, 1926 regarding officers who did not take part in the Ankara movement. This was an effective project designed to destroy the citizens who were not fond of the İnönü administration. A committee could give a final decision on the continuation or dismissal of an officer. By doing so, many officers were fired for insufficient reasons or notification or testimonies of unauthorized people. Many of them could even get their retirement and no one offered them jobs out of fear. Nearly all of them were forced to fall in the gutter.

The autonomous Istanbul Darülfünun (University) got a similar blow. As it did not make reform propaganda as expected from the government, the institution was turned into a state-run university. A number of prestigious scientists and lecturers, some of whom were known around the world, were dismissed. Instead, Jewish lecturers escaping the Nazi regime and supporters of the Republican People's Party (CHP), regardless of their specialization and education, were assigned to faculty positions.
RELATED TOPICS