A bouquet of immigrants 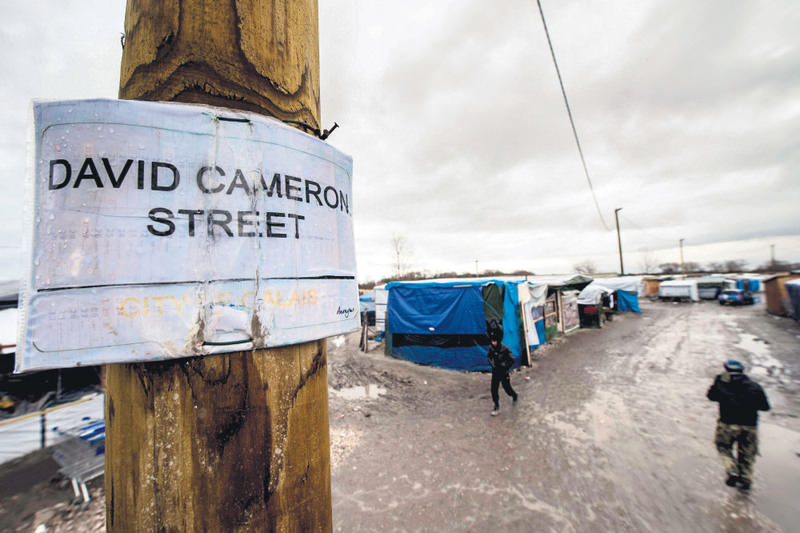 British PM Cameron referred to the refugees living in the terrible conditions at the camp in Calais as a ,bunch of migrants;, however, one of the streets in Calais is named after him, hoping that they can reach the U.K. one day. (AFP Photo)
by Jane Louise Kandur Feb 06, 2016 12:00 am

Sometimes I think if it weren't for Western leaders, I would find little to write about. I am so happy that almost every week someone somewhere says something that causes upset, outrage, confusion or anguish. This week is the turn of Britain, with the prime minister angering people on the matter of refugees

Last week British Prime Minister David Cameron referred to the refugees living in the terrible conditions at the camp in Calais, a camp known as "the Jungle," as a "bunch of migrants." This caused outrage and confusion in the U.K. and beyond. This phrase had so great an impact because it seemed heartless and cruel; a "bunch of migrants" condemned people who had struggled to safety, fleeing for their lives, many of whom were children without parents, with a dismissive gesture. However, there were those who found it hard to understand why there was such an outcry. One tweet said "if the prime minister had said a group of migrants this would have been ok."

Yes, if David Cameron had said that Labour leader Jeremy Corbyn had met with a group of migrants, fewer people would have been offended. The problem is that there is a very clear difference between the nouns "bunch" and "group." A group has a leader. A group is organized for a purpose. A group has an aim. A bunch is a random gathering of people, a rabble, an unthinking, unorganized conglomeration. But the prime minister of Britain used the word bunch, thus robbing the refugees of any gravity, any legitimacy.

But there still would have been upset. The word "migrant" is problematical as well. "Migrant" is a word that is usually used in conjunction with "worker." A migrant worker is someone who moves from place to place in search for work, usually seasonal. However, the people that Corbyn and his team were talking to were, for the most part, refugees.

But what stirred me was not Cameron's apparently off-the-cuff dismissal of the refugees in Calais. Rather, what moved me was the answers this comment stirred in the House of Commons. Chris Bryant, the shadow leader of the House gave a speech that struck many chords with me, as I am sure it would with many of the readers here.

"With reference to Prime Minister's Questions yesterday, the first building on this site was built by King Canute - a Danish migrant, Westminster Hall was built by William Rufus, son of William the Conqueror - the clue is in the name.

"The Royal Family has blood from Aragon, Holland, Hanover and Greece.

"The Rhondda was built with the sweat of Irish and Italian migrants.

"Our Speaker is descended from Romanian Jews, the Lords Speaker's family hails from Portugal.

"The families of the Business Secretary (Sajid Javid) and the member for Tooting (Sadiq Khan) are from Pakistan.

"The Corbyns were Norman French, the Graylings were probably French-Huguenots and God knows where the Bryants came from.

"Can the Leader of the House confirm that we are all a bunch of migrants?"

Yes, the U.K. is a country that was built and is populated by migrants.

On a personal level, my family is little more than a bunch of migrants. My great-grandfather and grandmother were children of immigrants who left Pomerania (at least as far as anyone can determine) to move to Russia. Their surname was Hackle and in Russia it became Gackle - that is Hackle, as the Russians have no letter H; this name made it clear to all that they were not Russians. Also, although practicing Christians, they were also of Jewish descent. My great-grandfather was a successful optometrist in St. Petersburg. But come 1917, such bourgeoisie pursuits became very difficult, especially for someone with a suspiciously foreign name. Also, Russia was in the middle of a civil war and my great-grandfather decided it was best to take his wife and three daughters somewhere else.

They emigrated to Germany. My ancestors were not part the great Russian émigré movement; the émigrés were aristocrats who migrated to Europe. The émigrés had a charmed life, with everyone wanting to hear their stories and be around them. My relatives were just ordinary working people. My great-grandfather was able to find employment, but the whole family found the transition rather traumatic.

My grandmother married a young German man; however, he was a young man with a French surname. In the not-so-distant past his family had migrated from France to Belgium and from Belgium to Germany. Thus two families from two different parts of the world, with two different religious pasts, came together.

However, come 1939, my grandmother, aunt and father had to leave Germany; they had to literally run for their lives. My grandmother sent my aunt to Holland and arranged for my father to go to a family in Switzerland. My father tells a harrowing story of this trip to Switzerland. As he was trying to get on a train the conductor decided he didn't like the passport of the little boy. It had a "J" (for Jew), half crossed out (indicating that he was half Jewish). The passengers on the train saw the police coming down the platform and pulled the little boy onto the train, probably saving his life. He was only 8 years old.

My father found himself in the U.K. by accident. He and his sister were attending a school in Holland, but went to be with their mother in the U.K. for the summer holiday. The day they were to depart for Holland, Britain declared war on Germany. My father could not leave. He had to stay.

However, he had no residency, no citizenship. He was given a card on which the words "enemy alien" were written and was packed off to a boarding school. He spoke not one word of English. He was, naturally, teased and tormented at the school. He learned to speak English fast - and well – in order to survive.

The interesting thing is I married into a family with a similar history. My husband's family came with the Karapapaks (Terekeme), who left Georgia when the region was invaded by the Russians in the 1870s. Mihrali Bey, accompanied by the Karapapaks, who were made up of both soldiers and farmers, came to the region of Sivas; the Ottoman state allowed Mihrali Bey to settle the Karapapak families there.

A few years ago our family went to Acıyurt to see the home in which Mihrali Bey resided when he was in the region. The people who had come with him spread to the surrounding villages and it is here that my husband's family came from.

The best place for the Karapapaks, who were Turkmen, to migrate when the Russians attacked their land was Turkey. The people in the Ottoman State shared their religion and the culture was not totally alien to them. There was empty land in which they could be settled, where they could continue to farm.

Mihrali Bey came to Sivas with families from Georgia in the 1870s; these people were settled in the Kangal region of Sivas, in about 40 different villages. The Ottoman State gave them permission to settle in whichever villages in this region they wanted to. Mihrali Bey and his men continued to help the Ottomans fight the Russians and later bandits who were causing problems in the Baghdad region.

There is a record that the kaymakam (local administrator) had a problem with Mihrali Bey and complained to the sultan. The sultan's answer was "Mihrali Bey is my unbridled lion. I will allow no one to oppress or torment him." Later Mihrali and his men were sent to Yemen where Mihrali Bey became ill and then died. Many of his Karapapak soliders were killed in battle in Yemen, with only a few being able to return to Sivas.

This was how the Ottoman Empire was. It was a place where people from different nations came together to live together. Immigration to the Ottoman lands was not like that in the U.K. or Germany in the 1950s and 1970s; European immigration was born of a need for inexpensive labor after the huge loss of life in World War II. People from the Commonwealth came to the U.K. and worked as unskilled laborers, as rubbish collectors, bus drivers or postmen. In Europe immigrants answered a need and both the U.K. and Germany were able to thrive with their help. But the region that is today Turkey has always accepted people fleeing from war and oppression.

Today in Turkey the word for immigrant - göçmen - can be applied to one specific group of people – those who fled to Turkey from the Balkans during the Balkan Wars (another war with the Russians) in the 1890s. When someone speaks of a göçmen in Turkey they are referring to people from the Balkans.

This was driven home one day when I got in a taxi with an international student from Albania. The taxi driver was trying to figure out where we were from. He asked the girl "Are you a göçmen?" She replied, "No, I am from Albania." "Then you are a göçmen." "No, I am a student here, I will go home when I finish my studies." "But you are from the Balkans; you are a göçmen." I, a true immigrant, cannot use this adjective. I am a mere yabancı (foreigner).

The prime minister of Turkey stated this week that Turkey is the "last fort" (or refuge) for people fleeing war and oppression. Once again Turkey has opened its doors to a flood of refugees. Not to migrants. Soon the word göçmen will change in meaning again or a new word will replace it. As a result of multiple waves of immigration, Turkey is a land that is rich in cultures and traditions. In the mid-15th century Jews fleeing the Inquisition came to Turkey. Five-hundred years later, during the Nazi regime, more Jews came to Turkey. Turkey has opened its doors to any people in need of shelter. It has suffered due to this policy; there have been times of hunger, times of unemployment, times when communities failed to understand one another. But Turkey has become richer and stronger; today, Turkey is a country made up of Turks, Kurds, Alevis, Turkmen, Göçmens, Jews, Christians, Armenians, Greeks…This is what makes Turkey unique. Perception is everything. Those people that Cameron sees as a "bunch of migrants" are seen here in Turkey as a "bouquet of immigrants" (or perhaps göçmen).
RELATED TOPICS