Children in combat: Why the PKK's recruitment of children is being ignored 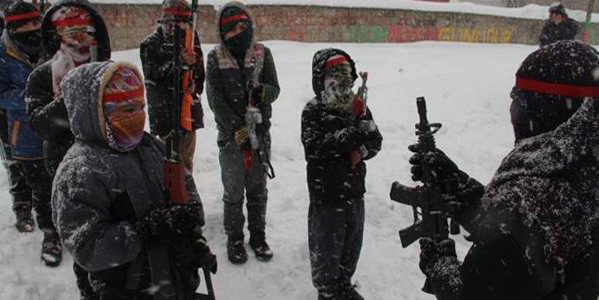 According to a report published by Anadolu Agency, there are currently 10,000 underage militants fighting for in the PKK.
by Ayşe Şahin Feb 06, 2016 12:00 am

Using minors in combat is becoming an acute problem as demand for more child recruits by armed groups continues to swell. Although the PKK is guilty of exploiting children as fighters, the issue is yet to receive the much needed attention of the West, which might have the power to obviate the problem

Since the government launched operations against PKK militants nestled in the eastern districts of Turkey after the terrorists slipped into cities from the mountains, the PKK has seen considerable loss. Army reports indicate that hundreds of terrorists have been killed in the operations and, in efforts to make up for their losses, the PKK is steering toward an older but familiar practice: The recruitment of minors. A few months ago, the shocking number of underage recruits within the PKK was released to the state-run Anadolu Agency (AA), in reports that 2,000 children are listed as fighters. The report also revealed that there are currently 10,000 underage militants laced in the PKK. These figures were said to have been compiled from the number of reported child abductions in the region.

With intensified wide-scale operations being launched by the government against these militants, the PKK has accelerated the recruitment of youngsters, but exploiting children is not something new for the terrorist organization. There is a laundry list of children being inducted in the PKK, a problem that has persisted ever since the insurgents ushered their fight against the Turkish government. The PKK has been recruiting minors as combatants, primarily using them in the rebels' most deadly operations. While this is considered a war crime under international law, the PKK shows no signs of abating, primarily because underage recruits are easier to manipulate and brainwash than adults. The vulnerability of these child soldiers renders them useful for PKK members; moldable, in a sense, because they are subservient and lack a tendency to defy authority. The majority of these children are teenagers trained to turn into thugs and later used to carry out the most dangerous jobs of their "gang." The energy, strength and enthusiasm of children certainly make them indispensable recruits, put on the front lines by their "leaders."

Although child recruitment is globally defined as a gross abuse of minors in contemporary humanitarian narrative, the West has not yet gone beyond issuing cursory warnings to the PKK terrorist organization for its violation of children's rights, continuing instead to drag its feet in the process, hesitating to stop this global threat that is attacking universal principals valorized by democratic policies.

In theory, it is internationally common knowledge that terrorist organizations are one and the same, all condemnable regardless of ideology or history. However, quite bewilderingly, in reality the Western community is balking at the possibility of raising worldwide awareness against the incessant crimes being committed by the PKK. The West is purportedly taking the PKK less seriously than other armed organizations; namely, DAESH.

Just one year ago, twin suicide bombings hit Nigeria, involving three 10-year-old girls, with explosives thought to be detonated remotely by Boko Haram, causing an uproar. Shortly thereafter, DAESH released a video which purportedly showed a Kazakh child soldier executing two men who were allegedly Russian spies, appalling the world. The Associated Press (AP) reported in July that, during DAESH training sessions, children were given dolls and told to cut off their heads, according to one statement by a 14-year-old, who recounted the grim details of his education in methodical execution.

However, earlier this month, when a news agency close to the PKK ran a report titled, "The declaration of YPS-Zarok (child in Kurdish) by the children of resistance," the incident went unnoticed on the international stage. The report indicated that an "army" consisting of minors was established and that the children were playing with "toy weapons" and digging ditches in snow.

Such examples of abuse normally amount to war crimes in humanitarian discourse and are approached with utmost sensitivity. According to UNICEF's 1997 Cape Town Principles, a child soldier is "any person under 18 years of age who is part of any kind of regular or irregular armed force or armed group in any capacity." The modern humanitarian advocacy group supports the idea that the recruiters of children -- not the minors themselves -- must be prosecuted for committing war crimes; whereas, the children -- regardless of whether or not they volunteered to bear arms -- should be approached with impunity.

In Turkey, a child is also defined as a person under 18 but, unlike humanitarian groups, the crime of terrorism, when committed by those between the ages 15 and 18, does not go unpunished, according to criminal lawyer Fidel Okan. He notes that the punishment is lenient for minors compared to adults according to the Turkish Penal Code.

The U.N. acknowledges that the PKK is abusing children. In the Human Rights' Council report on Syria in 2013, it was reported that the anti-government and Kurdish armed group the People's Protection Units (YPG) – an extension of the PKK in Syria -- had also recruited and exploited child soldiers in clashes. However, the bloc does not officially recognize the PKK as a terrorist organization.

So far, the U.N. has facilitated the release of hundreds of children from armies which have committed war crimes against minors by various action plans and joint agreements. The U.N.'s "list of shame" is deemed as an effective tool in stopping the abuse of children worldwide, as armed groups and armies eschew to be placed on the list. But, despite intense efforts to protect children across the world, the organization is currently far from raising the awareness needed to counter the PKK threat.

One Kurdish author, Kurtuluş Tayiz, says that the PYD is trying to achieve legitimacy by fighting against DAESH, underlining that "It is no secret that both the PKK and PYD were founded in the Qandil Mountains and the administrators of the PYD were appointed by the PKK." Tayiz also points to a conspiracy against Turkey, saying that "The PYD has been given a role by outside powers to re-design Syria."

At the end of the day, this paradoxical complication has drawn Western circles away from their stringent position against the PKK, as well.

Some experts believe that the efficient use of the media at home may have far-reaching effects on the issue. Baki Kaya, a retired staff colonel of the Turkish army, says that collective efforts should be exerted to raise the volume of rhetoric against the terror of the PKK.

"We need instances that will draw the attention of Western media outlets, such as demonstrations by Diyarbakır mothers who protested when their children were kidnapped by the PKK and demanded to get them back."

Currently, media outlets in the West, which cover stories about the PKK, use neutral language or sympathetic rhetoric in their depictions of PKK militants and the terrorist organization's "cause." However, you will hardly find any critical voices being raised against the offences committed by the organization and its perpetrators.

A romantic depiction of the PKK is possibly due to the fact that, from afar, the brutal reality of the PKK could seem blurred – or, on the other hand, due to the deceptive altering of public perception to a positive one. Either way, this is undoubtedly making things harder for Turkey as the country strives to convey the brutality of the PKK that is not only a threat to Turks but also the people that the U.N. claims to represent.
RELATED TOPICS