Peace not in the cards for Turkey any time soon 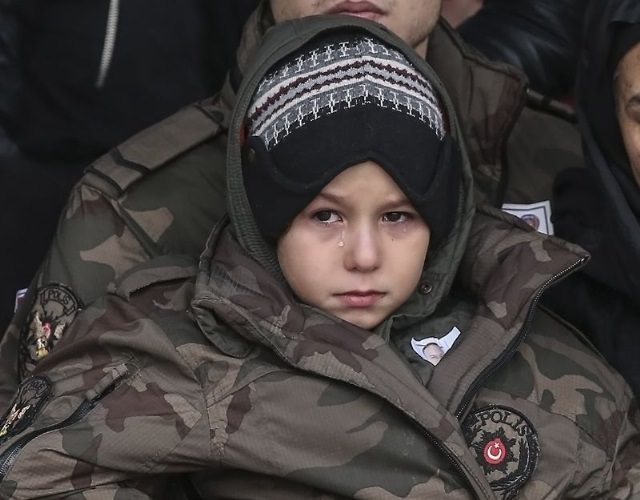 Each day brings further bad news to add to the many that have already piled up. Children continue to shed tears for their fathers lost in clashes with PKK militants in the southeast. The terrorist organization is using arms to demand further rights.With the HDP also disappointing the hopes of those who had faith in their peace efforts, we may continue to wake up to more chilly days a little while longer

Leafing through the pages of the newspaper accompanied by a cup of green tea, every morning, I prepare for myself a daily routine that I used to enjoy very much before having to read reports rife with harrowing instances of terrorism almost daily. I have to admit, if it were not part of my job as a journalist not to miss any news, I would cut myself off from the world instantly without a second thought, given the immense distress that "being overly involved" has caused me lately.

So, knowing it's not an option for the time being, I begin thumbing through pages with absolute reluctance, wondering what bleak news await me today.

Here we go. A photograph of a 10-year-old boy at the funeral of his father who I learned was killed in clashes between security forces and the terrorist PKK in eastern Turkey gives me the first lump in my throat. He is wearing a folded beanie and a military-print coat with his father's picture pinned on it and a single teardrop is rolling down his pale cheek. A deep sorrow can easily be read through his eyes, accompanied by a faint expression of pride.

His elder brother, has a less sentimental look on his face; notwithstanding, he too is weeping. More than agony, there is fury in his eyes; questions, answers, awareness and notably the pain of losing a father to terrorism that just does not seem to have an end in sight. 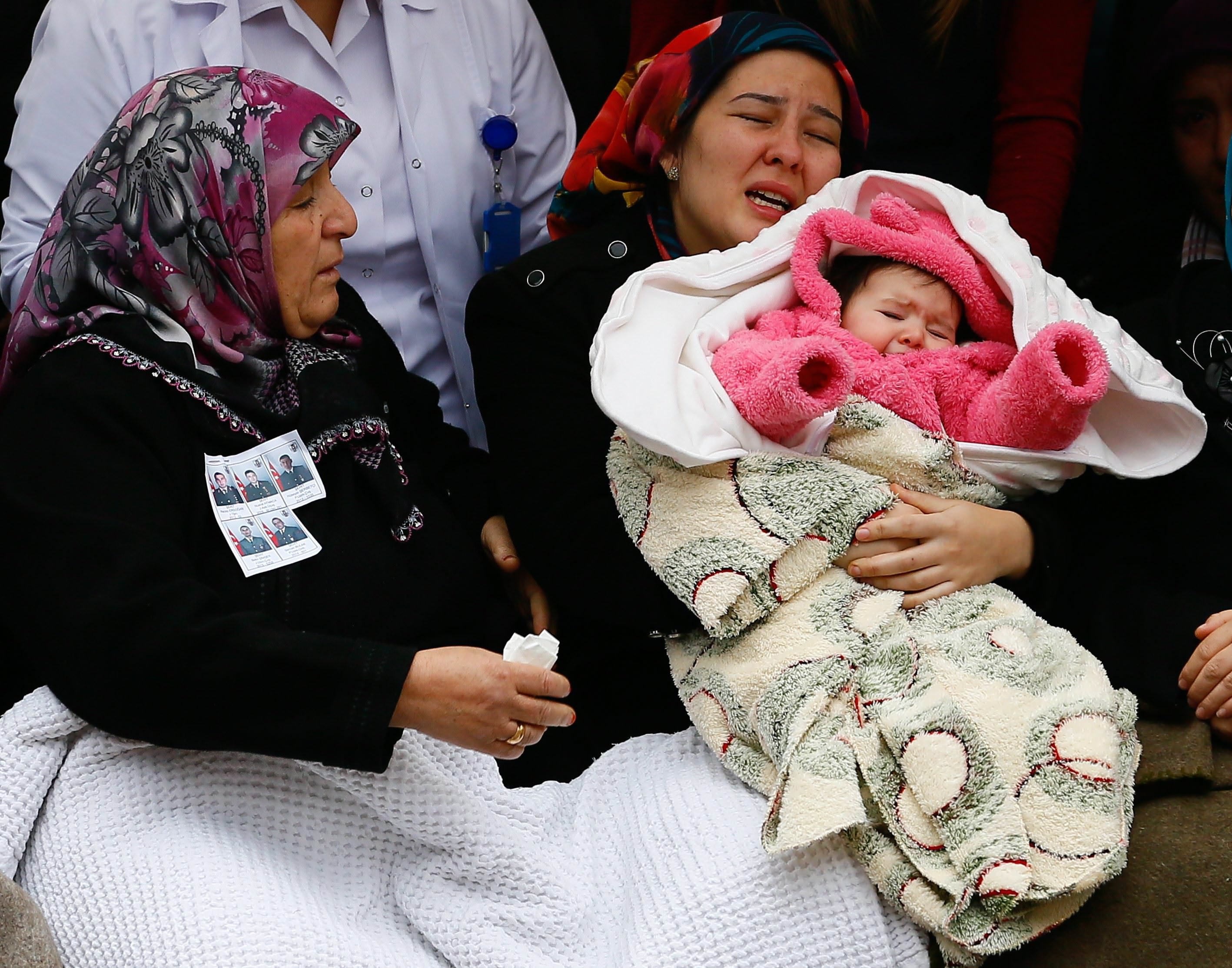 Meryem Burak holding her baby at her soldier husband's funeral in Diyarbakır this month.

On the left, another photograph, this time featuring a woman who cries out of apparent anguish, catches my eye. As I read the article below, I find some details and learn that her son was killed in clashes in the eastern Cizre district where the government has scaled up operations to cleanse the region of the terrorists. There is more. A woman wearing a black headscarf has burst into tears yelling, "I am a Kurd too. Would a Kurd do that to another Kurd?" The article says she lost her fiance in the clashes.All this is already intense but not over yet. The plight of the Kurdish locals in the region, who have been exposed to a weeks-long curfew as Ankara unleashed operations in some of the districts to wipe out terrorists from the cities they slipped into from the mountains, is equally devastating. The PKK ramped up its violence by attacking schools, hospitals, houses and ambulances, causing scores of civilians to die. So, it is not merely security officers who get their share of violence from the fierce PKK attacks, but fellow Kurds as well, who are on the receiving end of the PKK's wrath, aghast at the relentless violence committed by the terrorists. As they flee their homes to find a safer place, perhaps the same question echoes in their minds: "Would a Kurd do that to a Kurd?"

Despite being a terrorist organization, the PKK once had a cause, whether you approve of that cause or not. When it first launched its insurgency against the government that stretches back to the mid-1980s, the PKK claimed to be fighting to achieve equal rights for Kurdish citizens, citing the brutal policies of previous governments which mostly viewed the community as a pain in the neck. The ban on their language, the denial of the Kurdish identity, general apathy toward their concerns and repression ultimately led to an insurgency of some Kurds and evolved into a big problem for Turkey.

The PKK rose up to regain Kurdish rights but used arms to achieve that. It carried out suicide attacks that targeted civilians and incessant attacks on security forces, making them a terrorist organization both in Turkey, and in the eyes of the international community. Even so, they once convinced a considerable number of Kurds that the PKK was the "only" representative of the Kurdish movement.

But that was then. Now, the PKK is currently believed to have lost a sizable chunk of support from the Kurdish population, attributable to their insistence in carrying out an armed fight against the government and failing to transition to democracy. Kurdish author Orhan Miroğlu, states in his book "Burying the Weapons" that what has kept the Kurdish issues vivid in the Turkish agenda is "the struggle of the PKK" since the 1990s. But over time, he says, the Kurdish community has seen that Kurds who support other parties can equally pursue their rights, and most importantly do so "without arms."

Indeed, Kurds have made it clear what they want is peace in the region, especially after they savored it during a reconciliation process launched to end the Kurdish question. During that period, they enjoyed not having to worry about their children being recruited by the PKK, losing a son to violence, aggression in streets, vandalism, paying tribute to the terrorists, pressure and countless other offenses committed by the group. They also regained their rights as equal citizens and Ankara did its best to normalize the situation for the Kurds since it came to office in 2002. A retired high-ranking soldier, Baki Kaya told me once the government gave Kurdish citizens nearly 95 percent of their rights back and the only remaining issue was education in the native language.

Above all, the best was yet to come for Kurds. The party that represented the community and was the mediator during the reconciliation process, the HDP, was successful in passing a 10 percent election hurdle, and, with quite success, was able to elbow its way into Parliament, winning 80 seats in the June 7 general elections. The co-chair of the party, Selahattin Demirtaş, took the spotlight with peace messages in the wake of the elections and was even able to convince some liberal circles from Turkey's West.

But soon after the elections, it turned out things would not be as expected. The PKK, which constantly postponed laying down arms even after repeated calls from its imprisoned leader Abdullah Öcalan, continued to refuse to abandon weapons with slew of irrational pretexts.

And a month after the elections, the reconciliation process was nixed with the PKK announcing an end to a cease-fire, citing construction of dams in the east. The rest is pure violence. It was revealed that the PKK had been ganging up in cities and stockpiling the weapons and bombs to be used against the government forces "when the time came." On the other front, Demirtaş began dashing the hopes of those who believed in his peace efforts. He gradually edged away from his cautious, peaceful discourse and began backing the PKK's recent attacks, defining them as a form of "self-defense." For the first time recently, Demirtaş mentioned an idea of a separate state for Kurds, a "Kurdistan," a word which was even unspeakable in Turkey. This is the overall situation in Turkey now. Some intellectuals believe operations against the PKK would not lead to solution and call on government officials to go back to the table for peace talks. Peace sounds sweet amid all these daunting developments, but after all, I wonder who is there left to make peace with?

Who will be the addressee of the government once it decides to return to the table? Will it be the belligerent PKK who chose arms to peace and never believed in reconciliation? Or Öcalan, who seems to be no longer at the helm of the PKK as none of his disarmament calls have become realized? Can Ankara count on the HDP after it failed to become a political party of "Turkey?"

If this doesn't sound promising to you just as it does not to me, so welcome to my world of pessimism. Likely enough, we will continue to wake up to some chilly days for a while longer. In the meantime, let's just pray that peace will come out from where it hides and wink at us once again.
RELATED TOPICS