March is upon us 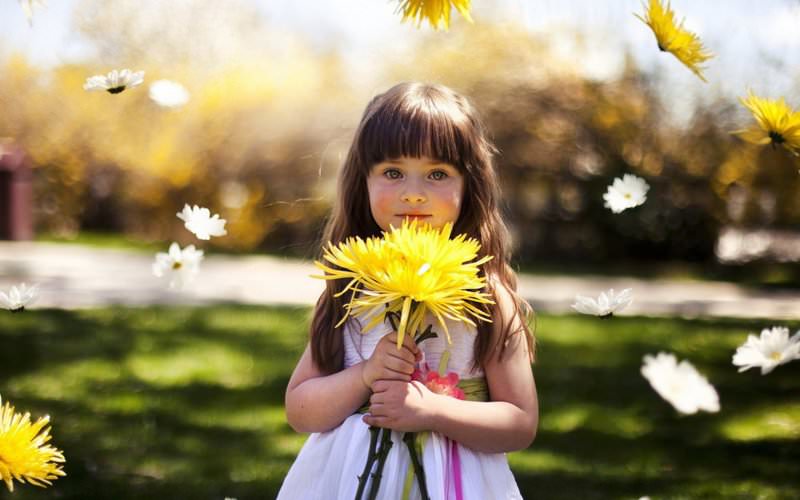 March is a funny old month. It never seems able to make up its mind if it is winter or spring. In fact, March in many countries is a month that acts as a bridge between winter and spring

I have always liked March... Crocuses and daffodils emerging from the ground, the gradual warming of the air... These are all things identified with March. But there are some things peculiarly Turkish that belong to this month.

I don't remember when I first heard people talking about the cemres here in Turkey. But the idea of them caught my imagination.

There are three cemres. The mythology behind the cemres is the idea that three fireballs from the sun fall to the earth each year, warming it at the end of winter. The first cemre, which warms the air, comes Feb. 19-20. The second cemre is on Feb. 26-27; this warms the water. The third cemre warms the earth and occurs between March 5-6.

The word cemre is derived from the Arabic. The ancient Turks and the Altay people believed that the phenomenon known as cemre was the responsibility of a jinn called Imre. He appears in the spring and starts to melt the ice and then the ground; finally, he rises as mist from the ground. This rising of mist indicated the arrival of spring.

As I said above, I find the idea of the cemres fascinating; particularly when living in a city where it never fails to be so warm in February that the trees start to bud; suddenly the weather turns so cold that snows come. This has been the case nearly every year I have lived here. And it has also been the case that almost every year everyone (including the trees) is shocked by this "odd" weather event.

March is a month that has inspired many English beliefs and sayings as well. For example, Mark Twain says that: "In the spring I have counted one hundred and thirty-six different kinds of weather inside of four and twenty hours." This is true in America, in Britain and in Turkey.

There was a saying in the city I grew up in the Midwest of America: "If you don't like the weather, stick around." I was reminded of this the other day when a friend texted me that she was coming to visit Istanbul. She inquired about the weather. Looking out the window, I replied that it was sunny and warm. "Oh great" she said. But, I warned her, that doesn't mean it will be sunny and wonderful when she came a few days later. And sure enough, it was raining when she landed... raining mud. I think she suddenly missed the British misty rain.

And these storms and high winds could also be metaphorical here in Turkey. Indeed, the word "spring" is a rich and much used metaphor. It indicates a thaw, an opening, a relaxing. Recent history has made us all familiar with this; the Arab Springs are perhaps the best example. Many of these springs, these thaws, have retreated back into winter, much like the month of March in Istanbul phenomenon, where there is so often a warm spell followed by a heavy snowfall. Perhaps the real spring is just round the corner. And if spring is around the corner, summer is not far away.

The poet Shelley said "O, wind, if winter comes, can spring be far behind?" That is, no matter how cold and blustery the weather is, we should not despair. This only means that spring is just around the corner.

Literature is full of spring metaphors. For example, readers of "The Lion the Witch and the Wardrobe" are familiar with the metaphor of the winter and the thaw that follows.

What is interesting is that Narnia in winter is a land of relative peace. True, anyone who opposes the White Witch is turned to stone and put in her garden. But everyone minds their p's and q's and the talking animals refrain from talking to avoid punishment. The sprites of the water and the trees are quiet, and do not move around, trying to avoid attracting attention. The "people" of Narnia are not happy. They are not content. They have no freedom. But they have food, even if scarce, and they have a system to which, no matter how oppressive, they have become accustomed.

It is only when the kings and queens-to-be, the two "sons of Adam and daughters of Eve" arrive in Narnia that the situation changes. The Witch realizes that the end is nigh and she gets twitchy. She tries to trick one of the human children onto her side, trying to spread sedition among the brothers and sisters. The people of Narnia are terrified, they do not know what is going to happen. And then Aslan comes.

With the arrival of the lion, the battle between good and evil starts. Many animals and other creatures are injured or lose their lives. But as they are fighting, as the struggle for supremacy between good and evil continues, the snows and ice melt. Winter is coming to an end. And the end of winter indicates the end of the evil reign of the White Witch who repressed everyone while she lived in comfort.

The story of Narnia doesn't end here. The Narnia series consists of seven books and there are new battles in the other books. The animals, dwarfs and humans who were serving the White Witch harbor resentment and wait until they can fight and retake the power they lost.

Turkey is going through a great thaw. This thaw is not so simplistic as that in Narnia. It is not so black and white. But when is life like literature? Life is much messier. But the thaw has led to a number of problems emerging. Like spring in snowbound lands, as the warm weather approaches, all the ugly, horrible things that were covered by a heavy blanket of snow start to emerge.

The Turkish spring is not like the Arab springs. The Turkish thaw did not happen with a sudden revolution; it did not happen overnight. The process has taken nearly 15 years. It has been a long and hard uphill struggle. There have been attempts to close down the ruling party while it was actually ruling. There has been an "e-coup." There have been moments of unrest. There have been doctored tapes; indeed, all three major parties have been victims of doctored tapes and videos, all have been wire tapped. The two main opposition parties were severely shaken by the leaked information and videos. There have been accusations of corruption hurled at members of the government, with no authentic or genuine proof ever offered. There have been accusations of helping DAESH, with no authentic or genuine proof ever offered. The burden of proof, for some twisted reason, has fallen upon the government. It is nearly impossible to prove something did not happen. It is much easier to prove that it did. Yet, proof is demanded from the accused and no one is demanding proof from the accusers. And the unfounded accusations are reported time after time in major media outlets, without substantiation and without shame.

Turkey has undergone numerous and exhausting election processes. Then there is the war in Syria. And then there are the peace talks, abandoned by the PKK, and the subsequent terrorist actions. While the peace talks were continuing, during a time of good will, the PKK somehow managed to lay mines under the tarmac in different cities in the southeast. While they were still sitting at the table. While still at the table, the PKK had snipers, domestic and foreign, positioned in these same cities in the southeast. They tried to declare war. But the Turkish government did not go to war. The Turkish state defended its territory and its people. The PKK burned and bombed schools. Once again, the Turkish government did not go to war, but it defended its territory and its people. The Turkish government was and is committed to ending the unrest in the southeast for the sake of those who want to send their children to school without fear of it being bombed. For the sake of those who want to go to work and get on with their lives. That is, the Turkish government is looking out for the interests of the great majority of the people who want to live in peace in the southeast. And now the Constitutional Court has decided that procedural considerations have no import, that it is the role of this body which takes final decisions on constitutional legal matters that it can usurp the role of the lower courts. It has ruled in a case where all the legal procedures have yet to be exhausted; it has interrupted and ignored the legitimate progression of a case through the courts. It matters not if the decision is right or wrong; what matters is that the judiciary is making decisions in a way that is not legitimate.

And throughout this process, Turkey has learned that as well as enemies, detractors and those who are doing their utmost to make sure that spring will never come, there are friends and supporters... Perhaps these people are quiet, perhaps they have no political power. However, in recent times the number of tweets showing support for Turkey have demonstrated how many people throughout the world really care about what happens in this country.

Winter is ending. Spring is on the way. The fourth cemre is about to fall... This cemre will warm the hearts of the people. Those who were repressed, oppressed and deprived of their rights are stretching, looking up and looking around. They are preparing for the spring and the summer that will follow. Spring may not be here tomorrow. It may not be here next year. But the cemres are falling and the signs of spring are unmistakable. "No matter how long the winter the spring is sure to follow."
RELATED TOPICS