Europe must keep the tradition of living together 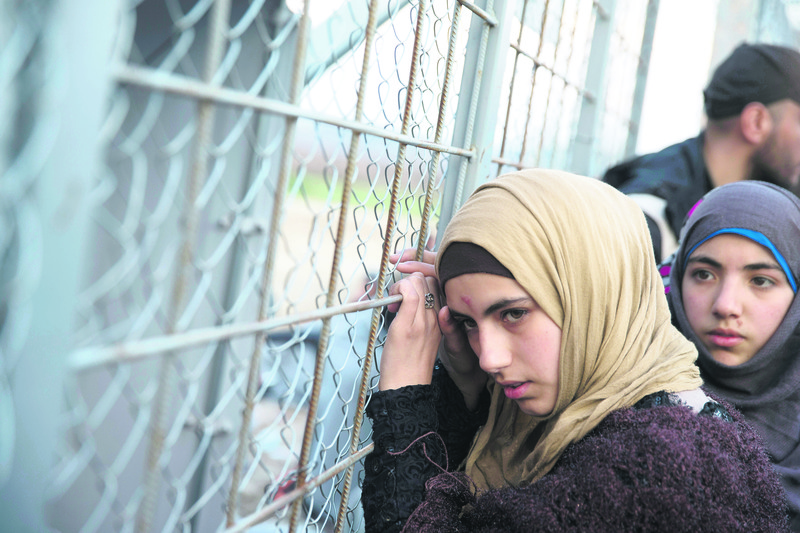 A young Syrian woman leans on a door through which refugees enter Macedonia in the Greek border town of Idomeni.
by Ekrem Buğra Ekinci Mar 11, 2016 12:00 am

The tradition of living together has always been an issue in Europe and now they think what the EU is trying to figure out what it will do with millions of Muslim refugees. Some politicians even go further and trigger Islamophobia. Will this problem bring an end to the European principles that they praise?

The tension in Europe, which has unfolded once again with the refugee crisis, continues to grow. Some states have announced that foreign peoples cannot enter their countries and a serious level of Islamophobia is spreading among politicians. It is worrying to see the Europe that came together to achieve high humanitarian values in its current state.

What do Islamic sources say about living together? Islamic law obliges a Muslim state to assure the religious freedom of non-Muslim communities. In theory, an Islamic state is a place where Muslims and non-Muslims live together peacefully. Recognized in the Quran and declared by the Prophet Muhammad, this assurance does not only apply to Jews and Christians. An Islamic state does not interfere with the practices of Zoroastrians, pagans or atheists; they should all be offered citizenship as well.

The religious practices in places of worship and the religious education of non-Muslim communities in a Muslim state should not be prohibited. Muslims and non-Muslims may not be religiously equal, but they are equals before the law. Those who think and live differently should be able to maintain their lives peacefully and express themselves as long as they refrain from acting against the state and communal order.

The crimes committed against non-Muslims are punished with the same penalties applied to Muslim victims. Since they are free to practice their religion the way they want, non-Muslims live more freely than Muslims. For instance, a non-Muslim can drink wine and participate in wine trading, but it is a gross sin and a crime for a Muslim. Furthermore, a Muslim who spills the wine of a non-Muslim compensates for the loss.

Admittedly, clashes have occurred both in religious and political life during the course of Islam's history, but in an Islamic state non-Muslims are subjected to their own laws and have their own courts. Ottoman Sultan Abdülmecid ordered the construction of a kitchen where meals could be cooked according to the Jewish community's kosher rules and declared the Jewish Sabbath, Saturday, as an off-day for only one Jewish student who attended the Faculty of Medicine. The Ottoman navy harbored during religious holidays such as Christmas, Easter and Passover to allow non-Muslim officers and soldiers to visit their homes. The Ottomans never said that those who were not like them did not have the right to live.

This is the manifestation of the tolerance shown to those who are different and it is really hard to find a similar case in the European history. Following the invasion of Andalusia, Jews and Muslims were given the choice of either being baptized or put to death. During decade-long sectarian wars, Europeans killed their co-religionists and many were burnt at the stake because their faiths were different. Although it has been almost 500 years, it is odd to see parts of Europe that proffer lessons in humanity to the rest of the world are failing to accept people from different religions and backgrounds.

In this regard, it is not difficult to understand Europe. Because of colonialism, a great number of people migrated to Europe to save their lives and earn a living. Unable to live with their own co-religionists, they could not live with Christians. Most of them were just laymen and unschooled in their own religions, but when they were discriminated against, they hid behind a religious group. While Europeans had no experience living with those of contrasting ethnic backgrounds and appearance, the global empires, with multiple religions, languages and cultures, also collapsed. These empires had offered a more humanist and democratic framework compared to the monstrous concept of the nation-state. Imperial authority used to tolerate people who belonged to different faiths or lived in an unorthodox way. The administrators of empire did not force subject peoples to assimilate and this is why those empires survived for centuries.

Rome was a Mediterranean empire that later adopted humanitarian values from Christianity and the Middle East. The Ottomans rejected assimilation and asked people to keep their traditional values as each person's legal status was defined. Nobody found this strange. It was a common policy of imperial government. The Chinese Empire, the House of Habsburg in Austria, and even the Russian Empire was tolerant of various cultures before it was shaken by communism.

It appears that the U.S., which has become a superpower by implementing this principle, is losing this precious ability. Britain, on the other hand, is the last example of imperial culture. Just before Britain went on to become a world superpower, King Henry VIII of England sent a delegation to Sultan Süleyman the Magnificent to examine the Ottoman Empire's political, administrative, financial and legal systems. Today, Britain has adopted, to a certain extent, a solution-oriented perspective on living together. Britain gave Muslims the right to establish their own schools and even courts. It would be suicide for Europe to say that only those who behave like them have the right to live on European soil. If Europe does not have the courage to learn tolerance from the Middle East, they can look at Britain, and the Middle East must regret losing those imperial values that allowed people to live together in peace.