Turkish women's football team: 'This is our game too' 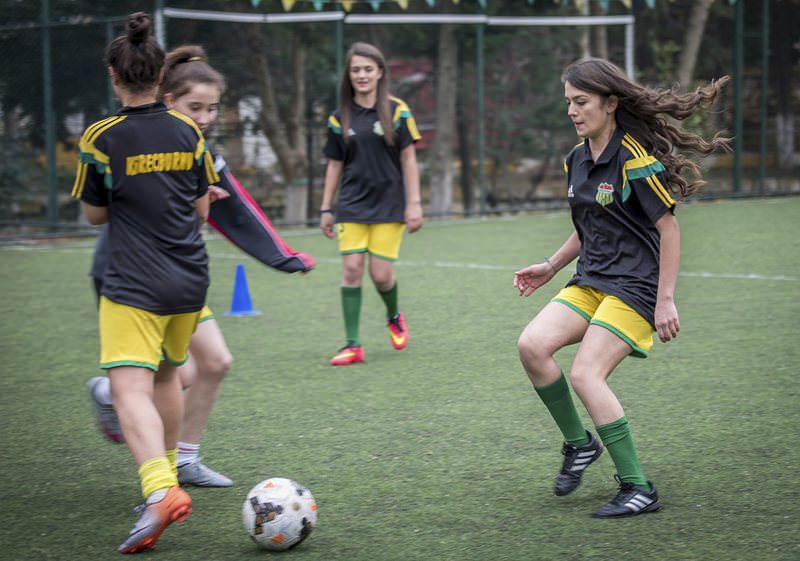 Founded six years ago, the Kireçburnu Sports Club Women's Football Team is successfully competing in the Turkish Women's First Football League with dedicated players who all say football is not merely a sport but a life-time passion

Almost one hour left for training and the players were all waiting. Once the bags were opened and the jerseys were spread all over the floor, they rushed to grab their jerseys. Then, I heard a voice saying, "Where is my jersey with the number 23?" After taking jerseys and sneakers, they headed toward the dressing room. The jerseys and sneakers were put on and shoe laces were tied carefully, accompanied by laughter.

We paid a visit to the Kireçburnu Sports Club Women's Football Team in Sarıyer, which competes in the Turkish Women's First Football League. The sports club has a 65-year history, but the women's football team was founded only six years ago under the name "Çimlerin Filizleri" (Sprouts of Grass). The team, which began its journey in the amateur league, has rapidly become successful and has changed the appearance of the neighborhood despite facing many obstacles. Both young and old residents of the neighborhood support the team in matches at Sarıyer Çayırbaşı Stadium. The team's fanatic female supporters run to the matches wearing the team's yellow and green scarf. Overcoming many difficulties, they have been promoted to the Turkish Women's First Football League.

The faces of each female footballer has a serious expression as if they were about to go out on the field for an official match, not training. Manager Şenol Doğan's instructions rule the field. When the training began, the young women took over the green field and dazzled with their tricks and kicks.

I was watching them during the training and had a chance to chat with some of the team players. Ezgi Çağlar, 24, the team's goalkeeper from İzmir, has been playing football for the last 12 years and was chosen as the 10th most beautiful female footballer in the world. Her devotion to the sport goes back to her childhood years. She said, "I did not have toys, nor did I play at home; I played football with my cousin on the streets. After I was recruited for the football team in middle school, my father wanted me to become a goalkeeper. I was born to be a footballer."

After playing football professionally for years in various clubs, she could not find a club to play at for an entire year. However, she continued to pursue her love for football by playing on an empty field with her friends. Çağlar shared her story about how she was discovered by the women's national team: "Beşiktaş's veteran goalkeeper Metin Akçevre discovered my talent during a match in Istanbul. He told me that I have a good physique and he called me for the national team camp. I learned how to be a goalkeeper from him. Football is not an exclusive sport for men; we - female football players - are as good as our male counterparts. However, there is a lack of interest for women's football in Turkey. Why are people familiar with the Men's National Football Team's goalkeeper Volkan Demirel but not Ezgi Çağlar? Perhaps, I put forth more effort than he does. For instance, our qualifying match against Germany for the Women's World Cup will take place on Apr. 8, but nobody in Turkey knows that. To tell you the truth, we expect support."

Çağlar also works as a physical education teacher in a middle school in Şanlıurfa. "Being a female footballer is tough. I wonder if we send male footballers to Şanlıurfa to teach three days a week and expect them to come back to Istanbul every week or not. I believe that no man can do that. When my students learned that I am a footballer for the national team, they were inspired and now they dream about running after a ball. We are training and educating the future generations," she said. Çağlar and her teammates dream of becoming champions of the Turkish Women's First Football League and winning the cup at the UEFA Women's Champions League.

Merve Aladağ, 23, on the other hand, is a striker in the Women's National Team. Her football journey, which began in Malatya, changed after the coaches from the national team discovered her talent. After her transfer to the Turkish Women's First Football League, Aladağ scored 27 goals and became the top goal scorer in the league.

Aladağ is one of the newest transfers to the Kireçburnu Sports Club. "I love sharing my joy with the spectators after scoring a goal. I was very happy when I become the top scorer in the league. I deeply care about team spirit," Aladağ said. She also emphasized unique joy of scoring for the national team. "When I scored against tough opponents, I lost myself," she added. Since she is on the staff of the Women's National Team, Aladağ was allowed to study in Kütahya University's Department of Physical Education Teaching. She travels by bus for six hours to play at the matches in Istanbul.

Mehtap Tonka, 20, is the team's second goalkeeper and has been playing football for seven years now. She fell in love with football after playing with the boys in her neighborhood. "My family supported me but my choice raised some eyebrows when I first began playing football. Anyway, I resisted those reactions. Football became a passion for me. Everybody got used to it after a while," Tonka said.

Serenay Öziri, 21, is a mid-fielder on the team. She has been playing football for nine years and is studying in Kocaeli University's Department of Physical Education Teaching. She became the top scorer during an interscholastic football tournament and holds the title as the second-best player in the entire world. She is famous for her long distance goals. "Goal keepers can hardly manage my strikes. I score in two out of five kicks but there are good foreign strikers in the league. It is hard to get up against them. I am the third footballer that scores the most goals," Öziri said. Her idol is American striker Alex Morgan. She also wants to become a world-renowned footballer one day.