‘If you are not against terrorism, you are with it' 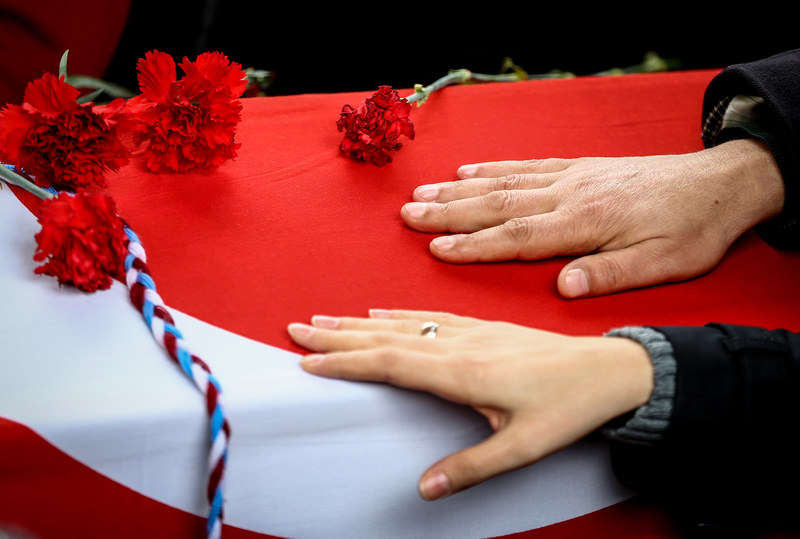 Terrorism has hit Turkey once again and the country has clearly stated its anger against the attacks. However, although it is time to come together no matter what, there are individuals whose ‘sick' thoughts do nothing but hinder peace

Turkey is wrapped in grief. Since last summer there have been so many senseless deaths; so much pain. On the surface it seems that people have finally managed to come together, to overcome their differences to say one word: "Enough." Enough killing. Enough deaths. Enough.

Terrorism is unacceptable anywhere, at any time, in any place. Terrorism is the weapon of the coward. It takes no bravery to drive a bomb-laden car into a public place and ignite it, killing yourself and all those around you. It takes desperation or a brain that has been numbed, robbed of all humanity.

The government's response to the grief of the people, the horror that they feel when confronted by this terror, is a very clear message: "If you are not against terrorism, you are with it." For Turks, this sentiment is incredibly unifying; stand up for the unity of the country, stand up and speak out against terrorism, against those people who are trying to tear the country apart. For the first time in a long time, there is a sentiment that almost everyone in Turkey can relate to: Terrorism is unacceptable.

However, there are a few sick individuals - as always, those who creep along the wall, whispering to themselves, out of step with the rest of the world - who are trying to make mileage out of other people's grief.

The photographs of the victims of the Ankara bombing were shared on Twitter; the intent was to recognize them, to mourn them. Yet, some sick individuals - again, as always - had to abuse this sentiment.

There is a photo of one victim, a hijabi girl. Under her name it says, "She was planning on being a teacher." A life nipped in the bud. A life cruelly extinguished for no reason.

But some sick individual had to share the following. Before sharing it, it should be stated that I nearly didn't share it. I didn't want to give notoriety to this person. I didn't want to make room for the cruel comments. But when seeing how misunderstood Turkey still is by the West, there was no choice. It must be known that this sick individual is not alone. There may not be many who would express their sentiments in this way, but the reality of how Turkey is divided stands at the heart of the issue: "At least there is some comfort in the fact that she won't grow up to be a teacher and bring up a bigoted generation. Please don't be offended, but with that rag on her head she probably wouldn't teach any future astronauts. There are three main groups in Turkey. The yobazlar [this word means bigoted and uneducated], the Kurds and the Atatürk supporters. We can't fool ourselves saying that now is the time for brotherhood. To be weak now will be our end. For this reason I cannot be sad that one of our mortal enemies, the yobazlar, has died. Forgive me, but the generation that this girl would teach could include an ISID [DAESH] suicide bomber."

One is left speechless. Surely, this is nothing more than a really disturbed individual expressing really disturbed thoughts. But anyone who lived in Turkey in the 1990s and early 2000s will tell you this is not just one individual. There are quite a few people who did think like that. Who still perhaps see the headscarf as the sign of the enemy.

Indeed, the terror has meant that these voices are no longer being heeded as they were before.

There are many instances in which HDP parliamentarians have supported terrorism. Two examples, perhaps the most chilling, are given below.

Tuğba Hezer, a member of Parliament from Van, paid a visit to a tent set up to receive condolences for the death of the suicide bomber responsible for the second Ankara bomb. That's right. She visited the family of the suicide bomber to express her condolences. The spokesperson for the HDP then defended (!) this action by saying, "One does not share the sentiments of everyone funeral one visits. Sharing the grief of those who are left behind, without regard of the identity of the dead person, does not mean approval of the actions." Yes, that is right. But to visit a tent strewn with PKK flags, where PKK propaganda is spewed out and to not speak against the horror of the attack is tantamount to support. Paint it as you will.

As if that is not enough, yesterday two HDP members of parliament, Mehmet Ali Aslan and Beslama Konca, attended the funeral of a PKK leader who had died fighting Turkish forces. At the funeral Aslan stated that "We are proud of the resistance these young people are showing," and that "We are walking down the same path."

They are proud and walking down the same path; a path of division, a path of destruction, a path of hate. A path that they hope will lead to the fall of the Turkish state and the creation of a Kurdish state.

This is a problem in and of itself. But then add to this the fact that these same members of Parliament swore an oath in Parliament. In the oath they stated: "I swear upon my honor and integrity, before the great Turkish nation, to safeguard the existence and independence of the state, the indivisible integrity of the country and the nation ... to [not] deviate from the ideal according to which everyone is entitled to enjoy human rights and fundamental freedoms under the notion of peace and prosperity in society, national solidarity and justice, and loyalty to the Constitution."

Imagine, imagine a world in which separatist terrorist forces are setting off bombs in a European capital city, killing and maiming hundreds of innocent people. Imagine a world where members of parliament of that country go to praise and encourage the terrorists who have taken so many innocent lives. Who have killed so many young soldiers, men and women who are only trying to do their duty.

It is hard to imagine. But these ministers are what can only be called collaborators. Make no mistake of it. Turkey is fighting an internal enemy who is trying to not only bring down the government, but to rip the country apart. Now is the time for all to stand against terrorism.