It is time Europe decided for itself 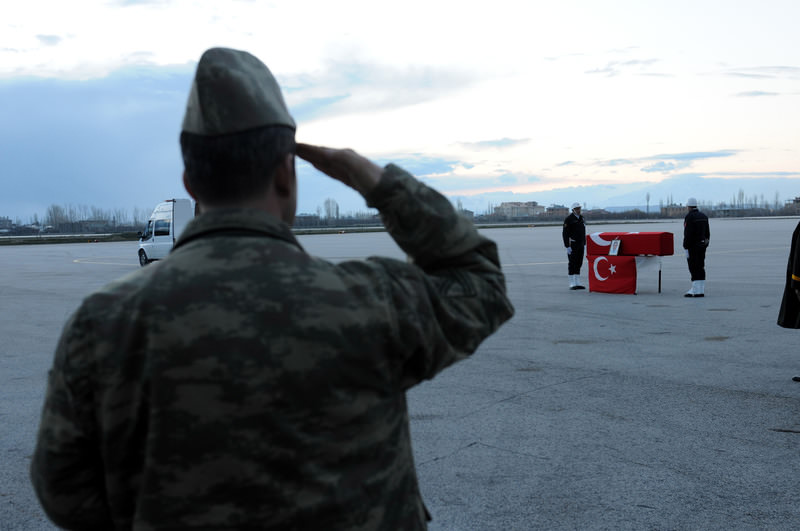 A funeral for police officer u0130dris Polat, who was killed in a PKK operation in Hakkari's Yu00fcksekova district.
by Jane Louise Kandur Apr 02, 2016 12:00 am

The PKK is a Marxist-Leninist terrorist organization recognized as such by Turkey, the EU, the U.S., Australia and Canada. This is a statement that has been heard numerous times this year

Why has the European Union, the United States, Australia and Canada identified the PKK as a terrorist organization? Is it, as some irresponsible media outlets have suggested, only in response to pressure from Turkey? No, the evidence why the PKK is a terrorist group is overwhelming.

The Australian National Security (ANS) page also lists the PKK as a terrorist organization. The reasons why are given on the ANS website. To begin with: "The PKK has also forced kidnapped teenagers to join the group ... in urban areas and in Europe." The ANS website goes on to describe how PKK militants attack military bases, police operations, as well as kidnapping military personnel and civilians, and sabotaging infrastructure. Between December 2013 and May 2014 (a six-month period) more than 300 children were kidnapped and forced to serve in the PKK forces (and it is highly likely that many of these died, being used as cannon fodder or even worse). We lose sleep over children soldiers in African countries; should we not be equally perturbed by children soldiers in southeast Turkey? We are concerned about the radicalization of Muslim youth in Europe by DAESH, but unconcerned by the radicalization of ethnic Kurdish youth in Europe by the PKK?

A further quote from the same site is enlightening: "Since 2012, the PKK's activities have mostly consisted of bombings, kidnappings, armed assaults and attacks against infrastructure. This includes setting up roadblocks and checkpoints and acts of sabotage against dams and other infrastructure."

From August 2012 until June 2015, 28 attacks made by the PKK are listed on the Australian National Security site. The page itself, by using the words "significant attacks" and "includes," tells us that there are many more such acts that did not make it onto the shortlist. Apart from attacks on military bases and police stations, in June 2015 there was an attack on the construction site of a dam, the kidnapping of a teenager girl in Bitlis, the kidnapping of two construction workers, attacks on homes of rival Kurdish party members, the abduction of three Chinese engineers from a power plant construction site, the kidnapping of 25 teenage students and the bombing of a gas pipeline.

Thus, it is clear that the PKK not only has killed hundreds of soldiers and police; it also does not shy from kidnapping civilians or causing "collateral damage." The report by the National Security Agency concludes by stating that the PKK has been known to "cause serious damage to property, or the death of persons or to endanger a person's life," that its actions "are intended to have those effects," that they are "done with the intention of advancing the PKK's political, religious or ideological causes," "are done with the intention of coercing or influencing by intimidation the government of a foreign country" and "are done with the intention of intimidating the public and sections of the public."

But it is not just the FBI and the Australian National Security agency who have flagged the PKK as a terrorist organization. Quite a few years ago Strategic Forecasting, Inc. (Stratfor), an American publisher and global intelligence company, compiled a report on the PKK.

According to Robert Fragnito of Stratfor, the budget of the PKK is an estimated $86 billion. A good portion of this budget is derived from the production and trafficking of heroin. Other sources of revenue include extortion, robbery, counterfeiting and human trafficking. These funds are used for many activities, including the purchase of firearms and munitions.

The turnover from drug trafficking is estimated to be millions of dollars; according to the above-mentioned report, a significant proportion of the heroin smuggled to Paris is the result of PKK activities.

"Interpol and the national police agencies of the EU member states note that the narcotics route that runs through Turkey to the Balkans and Western Europe benefits the 'separatist' organizations of Turkish/Kurdish origin and the PKK militants and their intermediaries."

Germany's chief prosecutor asserted that up to 80 percent of narcotics seized in Europe are linked to the PKK or "other Turkish [terrorist] groups," which then use the profits from illegal narcotics to purchase arms.

Although the Fragnito report is not new, it cannot be said to be out of date. The PKK creates funds through crime, and uses these funds to carry out terrorist acts. There are indeed those who see the PKK behind the smuggling of Syrians to Europe, which has proven to be a very lucrative form of human trafficking.

Thus, the reasons why countries like the United States, Australia, Canada and many individual European countries, and the EU as a whole, deem the PKK a terrorist organization are clear. This designation is not because the PKK is "trying to attain freedom from Turkey." The PKK is a ruthless criminal organization that has no compunction about killing civilians, police or soldiers, or kidnapping civilians and even children to meet their ends.

Yet, marches that are thinly-veiled pro-PKK protests are held in most European capitals at regular intervals. In Brussels, earlier this month, the PKK were allowed to erect a tent, with PKK flags flying high, in front of the European Parliament. Indeed, the tent was resurrected as of Wednesday last week.

Above, there is a mention of "other Turkish terrorist organizations." These organizations include the Revolutionary People's Liberation Party-Front (DHKP-C). Fehriye Erdal, who is wanted in Turkey for the murder of Özdemir Sabancı, an influential Turkish businessman, as well as Haluk Görgün, the president of Toyota in Turkey and the secretary Nilgün Hasefe, was apprehended in Belgium after being identified by her fingerprints. In 2006, just hours before she was to be sentenced - and despite 24-hour surveillance by Belgian secret service - Erdal escaped. Interpol issued a red bulletin for her. Despite all this, the Belgian court of appeal acquitted Erdal, in absentia, of all charges, saying there was no evidence connecting her with terrorist activities, although that she was - and still is - on the Interpol list of wanted terrorists. The Belgium police stated that they did not know where she was. Yet, Wednesday this week, a video showing Erdal to be in Brussels was broadcast. Bekir Bozdağ has said: "We have an extradition request; if necessary we will renew it. This request should be fulfilled."

One of her companions, İsmail Akkol, was caught last February in Aydın, loaded to the teeth with munitions, including rockets and grenades. He and his companion had arrived from the Greek islands, leading one to wonder where Akkol had been lying low all these years. Clearly not in Turkey.

The terrorists who caused the dreadful massacre in Brussels earlier in March, Ibrahim and Khalid El Bakraoui, had earlier been deported by Turkey. The Belgian authorities said that they had not been informed that the Bakraoui brothers were being deported because they were terrorists. That is, Turkey saw fit to deport them, but that did not mean that the Belgian or European authorities should feel any need to keep an eye on them. That is, Europe does not take Turkey's concerns seriously. In short, Turkey's criminals, Turkey's terrorists, are not Europe's terrorists.

The final twist in the tail is a report in Newsweek. After reprinting Michael Rubin's rabid, biased, unfounded article last week, this week Newsweek has printed an article on the flaws in the migrant deal between Turkey and Europe.

The worry in this article is that a flood of refugees will come to Europe. But these refugees will not be Syrian, but Turkish Kurds. The lifting of visa restrictions will make it easy for them to come. To quote the article: "Once on EU soil ... all Turkish Kurds ... who can prove political persecution or a threat to their lives if they return home are eligible to claim political asylum. Agit is likely to qualify, as her brother is in jail for membership in an illegal organization and police have raided her home multiple times."

Really? PKK supporters, PKK terrorists will be able to claim political asylum in Europe? If this is the case, will Europe also open its arms to DAESH supporters and terrorists who claim if they return to their Arab homelands, or even European homelands, they will be persecuted? Are this the standards that Europe holds? Is this their stance on terrorism?

Europe has to make a decision. To paraphrase Leigh Turner, who had the gall to comment on Turkey by tweeting "Turkey deciding for itself what kind of country it wants to be," it is time for Europe to decide what kind of union it wants to be. Does it want to oppose terrorism or to be selectively blind when it comes to terrorism; does it want to stand resolutely against terrorism, or differentiate between "good terrorists" and "bad terrorists?" If the latter, how is such a differentiation to be made? Who they kill? How many they kill? Or how many votes they can muster?

Turkey has no decision to make. Turkey is resolutely opposed to terrorism, no matter the abbreviations, be they DAESH, PKK or DHKP-C.

To quote from President Recep Tayyip Erdoğan's reply to Leigh Turner and friends: "We are aware on which side those who constantly talk about democracy, human rights, freedom and elections choose to stand when individuals who are trying to overthrow the state confront those who have been elected by the people."It is time that Europe decides where it stands on terrorism, and rather than wavering, rather than dilly-dallying, stand by those who are against terrorism. There is no good terrorism. There is no bad terrorism. Terrorism is terrorism, and a terrorist is a terrorist.
RELATED TOPICS