Turkish-American Cultural Center: A beacon of modern Islam that strives to battle stigma in US and beyond 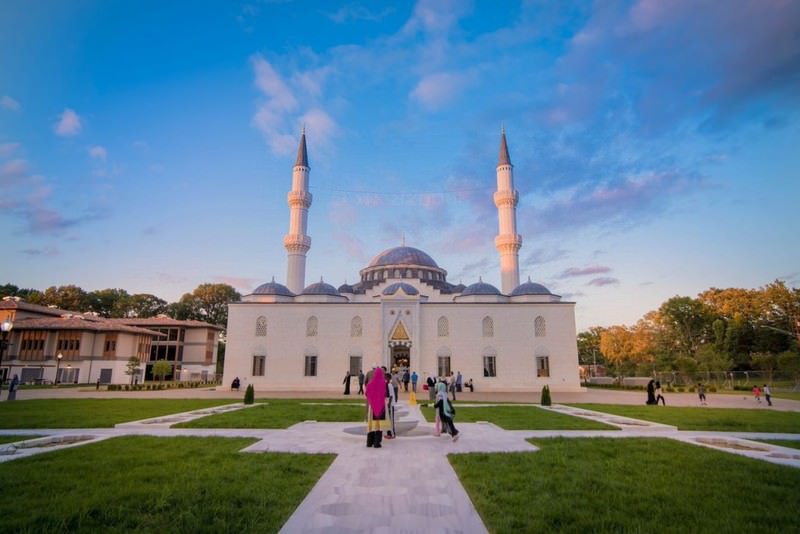 The U.S.'s largest Islamic complex, unique for its Ottoman architecture, which opened last week, is a social and religious center. What is more important is that the mosque and its facilities will impart a message of unity and peace with its supra-national identity beyond the interests of nation-states

A Turkish-funded classical Ottoman style mosque with a huge dome reaching over 1,880 square meters was recently completed in Maryland, and was inaugurated on April 2 by President Recep Tayyip Erdoğan. The mosque is the only one in America with two minarets and includes the largest grounds, allowing 3,000 people to pray together. It is also an exquisite example of 16th century Ottoman architecture. The greater grounds of the mosque itself is called the Diyanet Center of America, which encompasses cultural areas, exhibition and conference halls, guest houses, sporting facilities, a Turkish bath, swimming pool and also a number of impressive Seljuk and Ottoman style residential homes.

Just before the inauguration ceremony last Saturday, I had the chance to have a conversation with Ali Saidi, a young Arab man, about the mosque. Saidi was quite excited and full of both gratitude and respect for what had just happened in Maryland. His only regret was that he lives 50 miles from the mosque, although he did manage to come with his family for the inauguration ceremony. He said he planned to spend some weekends with his children at the complex, naturally excited to meet with different members of the Muslim community in America.

What is the complex meant for? 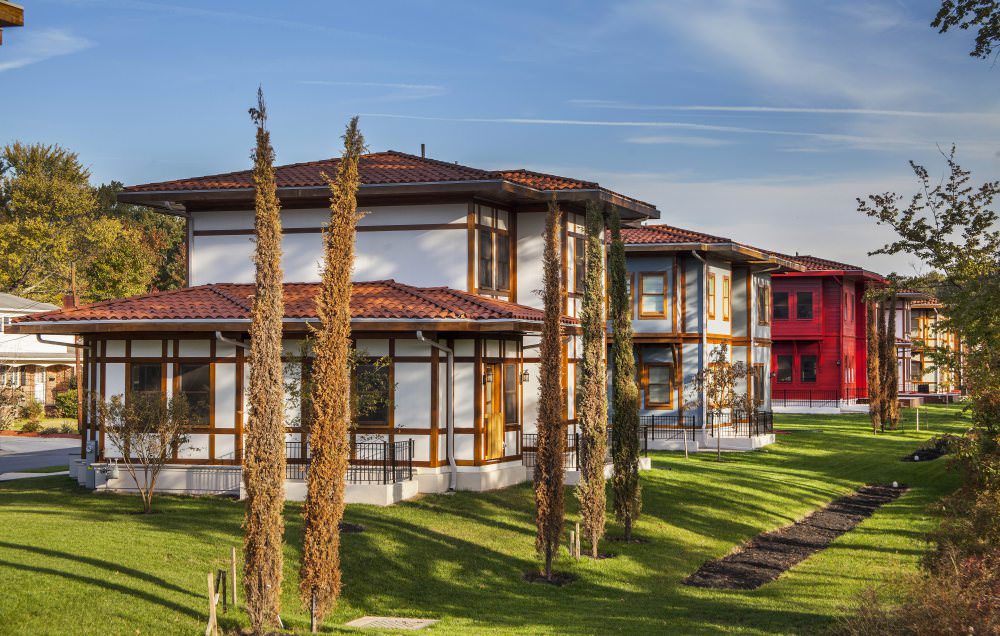 The complex is situated in a quiet neighborhood in Maryland.

As the U.S. census does not include religion, it is hard to guess the country's total Muslim population. But as we know converts are increasing, it is estimated that Muslims represent around 1 percent of the adult population, and America has thousands of Muslim organizations.

It is often overlooked, but Muslims in America have a long history in this huge country, with the first mosque built in 1929 in Ross, North Dakota, and now the largest mosque complex is in Maryland. It is not only a complex, as it was built more as an epicenter for the intercontinental exchange of Islamic tradition in the arts, architecture and culture. The Turkish-funded campus is a social and religious complex as well as a striking example of a great tradition in terms of style and impressive aesthetics. The dome of the mosque was built in the classical Ottoman architectural style and symbolizes unity in space, as Muslims enjoy reunion during prayer. Islamic art classes and concerts of the best examples of music from Muslim regions will be performed for all those interested. Traditional motifs, Arabic inscriptions of a 1,000-year tradition exemplify, for example, a pure Turkish-Islamic art in the concept of simplified architecture.

Among all these facilities, perhaps the Turkish bath is the most striking and a rare example, as a Turkish bath built in Ottoman style in the West, is a monument to cleanliness, which is a prerequisite of praying for those about to enter a mosque.

Diversity in lives, unity in hearts

As in every religion and at every point in Islamic regions, Islam has suffered from ethnic, national and cultural divisions, biases and sectarian separatism. In fact, it could be argued that religion or religions are failing to give their strongest message of unity and peace to transcend identity crises, the interests of nation-state or sectarian conflicts. In their efforts to understand religion, Muslim communities in non-Muslim countries revive religion, although more concerning cultural roots in their ghetto-like communities rather than through core Islamic principles.

This happens everywhere, and it certainly does in the U.S. and Europe as well. The religious facilities also diversified under the upper cultural-political divisions and Muslims are separated from each other based on minor interpretational differences or cultural habits with this estrangement growing even under the single roof where they pray. This typically happens in Arab, Indian and North African mosques while in Turkish ones national divisions are accompanied by cultural and ethnic divisions. In a world torn apart, this new Turkish-American mosque complex offers a gathering place for Muslims regardless of their ethnicity. Moreover, the imam of the mosque pointed out this essential part in a recent speech in which he said that if houses of worship are divided within and without, Muslims, especially Muslim-Americans, will feel as if they belong nowhere.

Diversification in skills, interests and mentality is a richness that can turn into a threat for the general state of communities and the common good. Yet Muslim communities are not of one heart or one voice against Islamophobia, but more against the stigmatization of Islam and terror and radicalization within these communities.

Erdoğan said in his speech at the opening that Islamophobic tendencies are growing in America. He said Muslims are just like any other community in the U.S., contributing to American society, which strengthens the country. He also said that he found the growing anti-Muslim rhetoric during the current presidential cycle especially astonishing.

But help is at hand. The head of the Turkish-American Platform, İlkem Şahin, speaking to Daily Sabah stressed that the most important characteristic of the mosque is its supra-national identity, which is very much in need these days, adding as a footnote that as long as the mosque is funded by the Turkish state it belongs to all Muslims for the good of Muslim civilization and so therefore is a cultural hub for all.

All groups, regardless of ethnicity or origin, gathering in this complex can enjoy the clear benefits of American society, he added.

The complex is a symbolic landmark and will become a cross-cultural reference point for America's diverse society and will serve as a pivot of tranquility.

A mosque in Islam means co-existence of enlightenment of an ancient society derived from wisdom and knowledge. I would argue that we need mutual understanding and trust more than ever while humanity is plagued with escalating conflict and identity crises that are invariably found therein.

Meryem İlayda Atlas is Editorial Coordinator of Daily Sabah. She is board member of TRT, the national public broadcaster of Turkey. Atlas also serves as a visiting scholar at Çanakkale Onsekiz Mart University.
Last Update: Apr 05, 2016 1:05 am
RELATED TOPICS