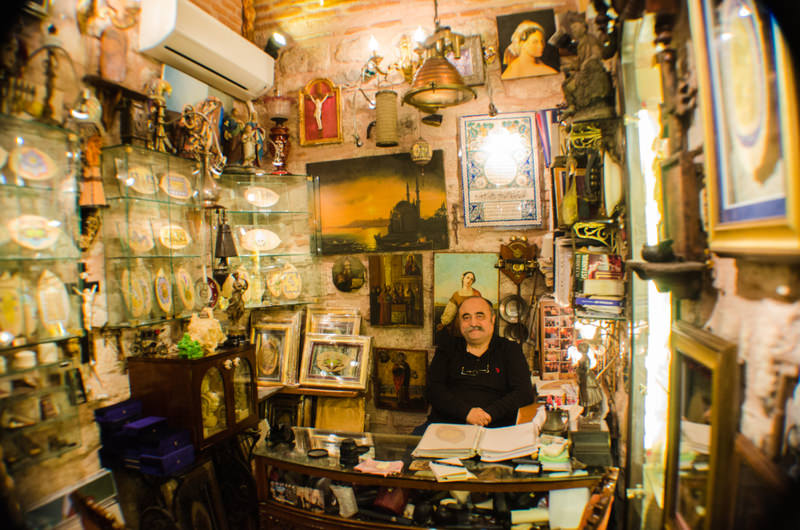 Nick Merdenyan, an Armenian craftsman based in the Grand Bazaar, has engraved traditional calligraphy, symbols and prayers of the three Abrahamic religions - Judaism, Christianity and Islam - on dried leaves for years and has gained international recognition for his master skills

The initial construction of Istanbul's famous Grand Bazaar began in 1455, soon after the conquest of Constantinople under the orders of Ottoman Sultan Mehmet II. The bazaar was devoted to textile trade and has remained a central hub for gem trading and various other treasures ever since. Initially a small establishment built from wood, the bazaar expanded as the number of tradesmen and buyers increased, eventually making it one of the largest covered markets in the world. The bazaar's four main gates beckon visitors to enter and shop along its 60 streets, entering a labyrinth of wonder and awe. Woven silk carpets, glass-blown trinkets, cobalt blue İznik tiles, aromatic spices and lokum (Turkish delight) made from rose petals will eventually lead you to the grandest section of the old bazaar: The antiques quarter. Here you will find objects as old as time and tales as old as rhyme. 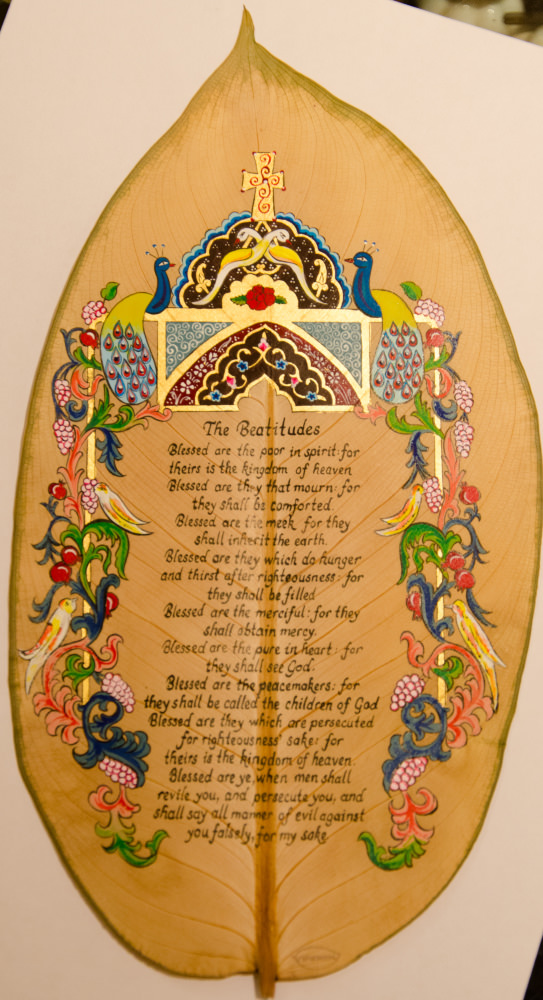 In the midst of all the collectables lies a humble man in a corner store, Nick Merdenyan. Merdenyan began his journey at a tender age when he started carving trinkets and ornaments from the mineral sepiolite, which is known as the "foam of the sea." Often referred to as meerschaum and used for making pipes, this mineral's qualities are quite intriguing. Sourced from the plains of the central province of Eskişehir, meerschaum begins as a pearl-white soft rock that is easy to carve, leaving the outcome susceptible to the creative talents of the carver. With time, use and exposure to tobacco smoke, the mineral adopts a mature tan like that of desert sand and orange earth, leaving the mineral to harden. Among the row of collectable pipes, comfortably retired in their velvet-covered hard cases, is one that begs for its story to be told. Merdenyan picks up the inviting pipe in its hand nestled an egg that reads "pardon" and gives a bewildered smile. Now the color of burnt orange, Merdenyan reveals the story of a young gentleman who walked into the cozy store and requested to exchange the pipe for something else. Predictably aware of the age of the pipe, Merdenyan asked who the owner is. When the man responds, "my late grandfather," Merdenyan's curiosity is heightened with intrigue. Without hesitation, he informs the gentleman that the pipe he possesses is likely to be more valuable than any in his collection. Not fazed by this information, the young man insists on the exchange, and picks a pipe that is opal white with no story to tell. 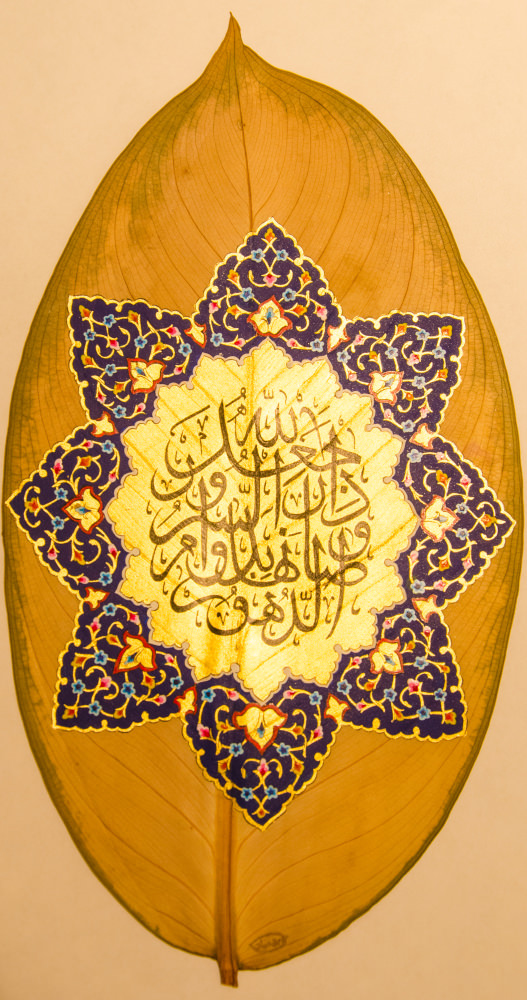 As all things in the small shop go, the main attraction also has a story to tell. Merdenyan received a potted plant at the baptism of his only son. As the plant lives its life and sheds its leaves, Merdenyan clips two of the leaves and preserves them between the pages of a book. Time passes, his son grew up and one day the two leaves accidently see the light of day. Morphed from a dry leaf into a perfect, almost transparent silky canvas, Merdenyan rushes the leaf to a loyal calligrapher friend to examine. Engrossed in the delicacy yet strength of the leaf, the two friends begin to experiment. The master calligrapher transcribes the Tughra - the signature of Sultan Suleiman the Magnificent - on one leaf and Yunus Emre's epigram "Love who loves you" on the other with Kufic letters. The event, which was nothing more than an experiment, captures the attention of two American tourists who visit the shop. Requesting to buy the masterpiece, Merdenyan sold his first work and began his journey. 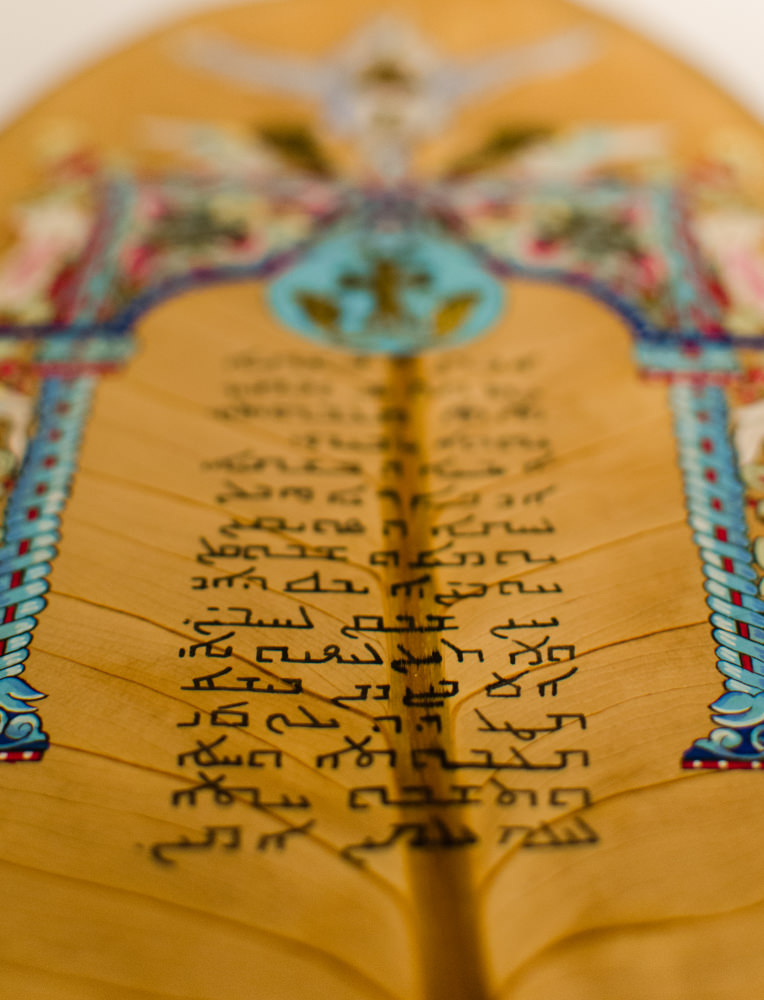 Merdenyan begins by tracking the plant and discovering it is a dieffenbachia from Denmark. He imports the leaves for som§e time until they become too expensive, at which point he turned to Florida in the United States. The leaves take approximately two years to transform into the perfect canvas and require great thought and immaculate precision. Drawing inspiration from the three Abrahamic religions, Christianity, Judaism and Islam, Merdenyan inscribes messages of love, peace, unity on the rather delicate leaves. Some details are so intricate that it is written with cat hair under a magnifying glass. The exclusive paint with captivating colors include a rich gold, dynamic blue, enchanting red and an array of shades as vibrant as the sun. Many of the designs feature images from nature such as flowers and animals, along with holy places of worship. 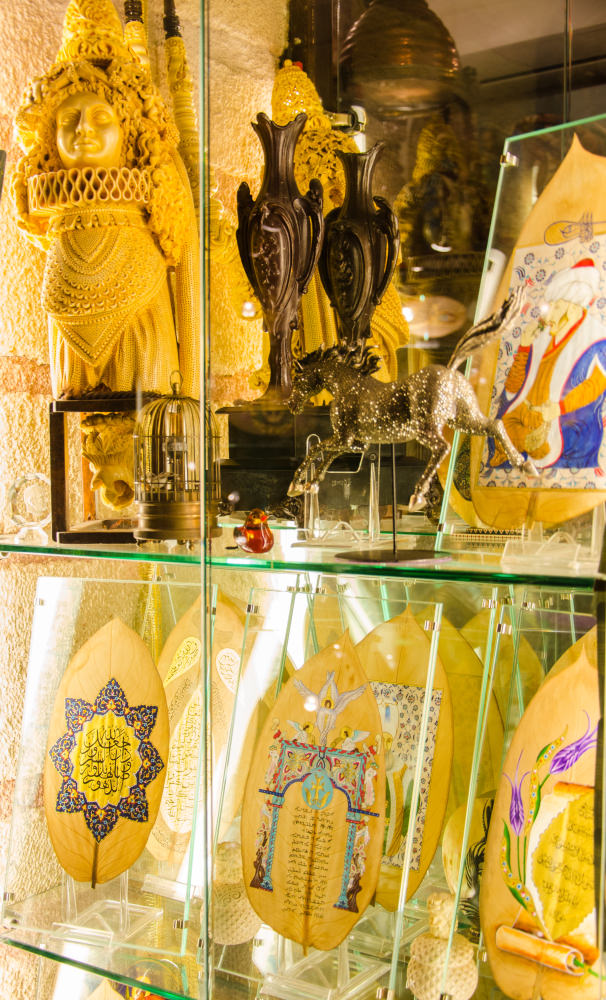 Merdenyan's art has gained international recognition. Among his acclaimed collectors include famous people such as U.S. Democratic presidential candidate and former secretary of state Hillary Clinton, former U.S. first lady Laura Bush, Queen Letizia of Spain and former president Abdullah Gül. His walls are decorated with antique artefacts with interesting stories, messages of tolerance engraved on leaves, preserved in frames of glass and articles to prove his highly esteemed work.