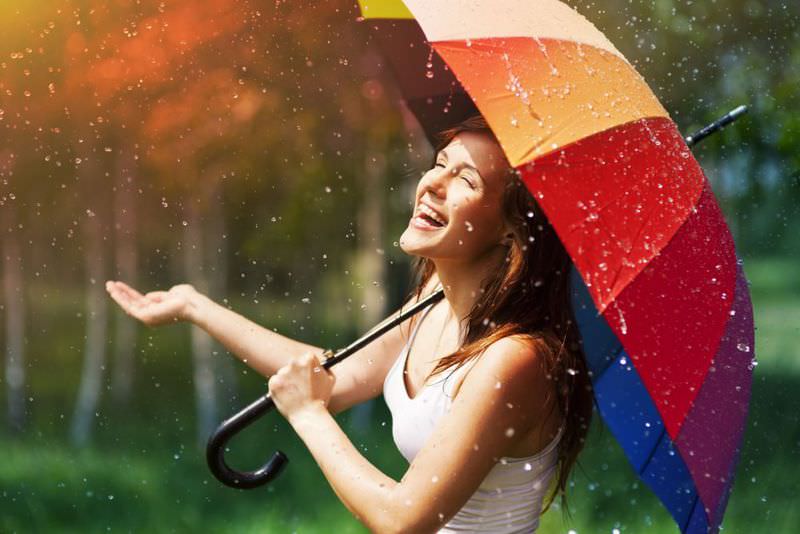 ‘Rain nurtures with its fresh, reviving spray,' wrote Rumi in his famous poem ‘Masnavi.' Among Sufis, spring showers are believed to have healing power and foster abundance and different traditions have been kept alive for years. Some of the interesting traditions in Anatolian villages include collecting raindrops in bowls and making yogurt with the water

According to mythical beliefs, an oyster patiently waits for raindrops in the spring to create a pearl. Obviously, this is not the way that a pearl is created; however, it clearly represents the miracles that April and May spring showers bring. For hundreds of years, spring rainfall has been considered to have special healing powers. This is why it is also considered to be a sacred gift. You may come across similar metaphors in poetry, especially while reading Persian or Anatolian poetry. World-renowned poet Mevlana Jalaladdin Rumi, one of the most prominent poets of Islamic culture and history, wrote about the benefits of spring showers in his lengthy poem "Masnavi." "Rain nurtures with its fresh, reviving spray. But also causes ruin and decay. The rain in spring is wonderful, it makes things grow. Fall rain is like a fever, though; The former nurtures tenderly like breath, while the latter makes things sick and pale as death," Rumi wrote. He also refers to the phrase "Take advantage of the coolness of spring" from a hadith by Prophet Mohammad in "Mathnawi" with the following lines: "The prophet told his friends once 'Please beware; don't cover up yourself against spring air because your soul will gain from that pure breeze that does to it what spring does to the trees. But you must flee fall cold instead, for it will leave you like these gardens: Dead.'"

In fact, Sufis at one point collected April raindrops as they fell, using a special vessel called a "nisan tası" (April bowl). They then served this water to guests and sprinkled it on dry land with the purpose of healing and fostering abundance. To this day, Anatolian people still preserve water from spring showers for the same reason and have kept this tradition alive for many centuries.

Assistant Professor Nuri Şimşekler, the director of the Mevlana Research Institute at Selçuk University, said the tradition of "Ab-ı Nisan" (April Water) involves collecting the raindrops that fall between April 21 and May 21. Today, you can still see April bowls that have been preserved for centuries in the Mevlana Museum in Konya, especially the bowl that was made in Mosul on the order of Ebu Said Bahadır Khan, the last emperor of the Ilkhanids, in the 14th century for Rumi's tomb.

Similar traditions were adhered to during the Ottoman Empire as well. The servants at the imperial palace used to collect the first drops of spring rain in bowls and present them to the sultan who awarded them with thousands of "akçe" (Ottoman coins). Today, you can see April bowls displayed at Topkapı Palace in Istanbul.

People would keep the leaves of the bay tree and the olive tree that are washed in April rain give the leaves to each other as a token of well wishes for a blessed year. Anatolian people would also make yogurt from the spring rain water. Spring showers are considered sacred and healing, both traditionally and metaphorically, but what does science have to say about the rain? Do these mystic traditions bear any weight in the scientific realm?

According to scientific studies, the awaking of nature in the spring allows pollen, colophons and the essential plant and tree oil to be released into the atmosphere through the wind. So, precipitation allows these particles to reach the soil. Spring rain is very beneficial when drank and is useful for myriad purposes as they include such particles.

Scientists also state that since the spring rains include iron, it is good for those with an iron deficiency. Scientists suggest people measure the level of iron in their blood before getting soaked by spring rain and measure it again afterward to see any difference in iron levels of their blood. Furthermore, it is not possible under normal circumstances to make yogurt with water but since the spring rain includes lactic acid and bacteria, fermentation is possible.

With a little sunlight, rain and warmer soil, it is rather amazing that spring has the ability to awaken plants and trees from months of hibernation, while colorful flowers bloom and pop up on every corner. Indeed, the old saying that "April showers bring May flowers" is a true one. Istanbul welcomes numerous spring flowers like erguvan (Judas tree), magnolias, acacias, hyacinths, narcissus, mimosas and wisterias as the harbingers of spring. For rain lovers, I highly recommend walking under the spring showers these days and getting wet to benefit from the blessing of God while listening to the sound of nature. If this does not appeal to you, at the very least, I recommend that you take a moment to sit under a metal roof and experience relaxing moments listening to the trickling of rain.
RELATED TOPICS