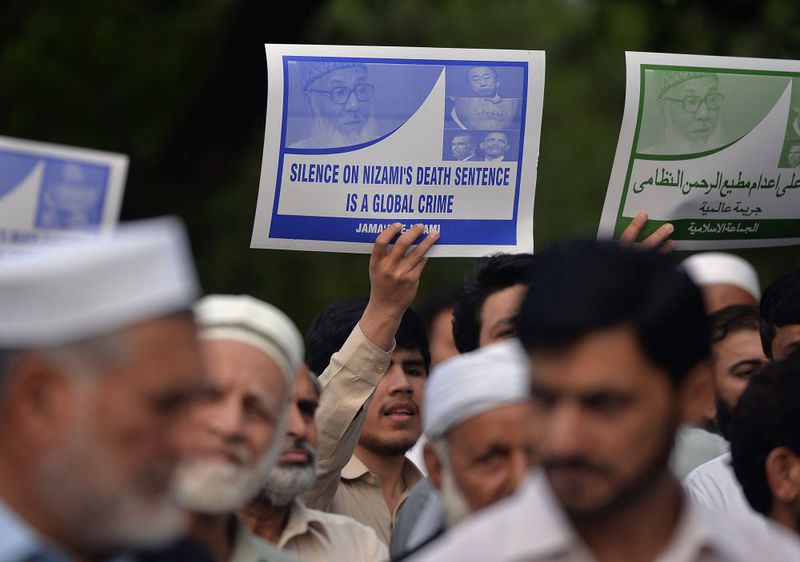 A death sentence was handed down this week by a court in Bangladesh to Motiur Rahman Nizami, the former head of Jamaat-e-Islami. Nizami was hanged in Dhaka at one minute past midnight on May 11. He was executed after a war tribunal found him guilty of war crimes committed during the Bangladesh War of Independence in 1971. Watching English-language news, it seemed that justice had been served, and everyone in Bangladesh was for the most part content

War is always terrible. People lose their lives in inhumane ways. Deaths occur on a large scale. But war crimes, when committed, are particularly heinous. Genocide, rape or mutilation as weapons of fear can never be accepted. War criminals must be punished - there is no question of that.

Motiur Rahman Nizami was accused of organizing a large number of executions and promoting rape as a weapon. The reports on English language television stated that all was calm in Bangladesh, the people were happy that Nizami had been executed.

However, the story is not this straightforward. In fact, it rarely is. When one looks closer at the story, it is clear that a number of doubts have been raised about Nizami's guilt.

First of all, the Jamaat-e-Islami itself has stated that the trials and subsequent executions are political in nature, and are directly targeting its members. But naturally, the party will try to defend itself. What is important is if independent observers corroborate this view. Outside observers have agreed that the party has been repressed.

Human Rights Watch, Amnesty, representatives from the United States and Turkey have all expressed doubts about the justice served up in Bangladesh's court system.

Phil Robertson, from Human Rights Watch, stated that Nizami's trial was "neither free nor fair," accusing the court of not providing fair trial standards. Robertson stated that Nizami was allowed an insufficient number of witnesses, and that the defense was not allowed to question inconsistencies in the statements of prosecution witnesses. And there were serious concerns about whether the judicial panel was independent.

The U.S. State Department said that while "...it supported justice being carried out, it was vital that trials were free, fair and transparent and conducted in accordance with international agreements." Elizabeth Trudeau, a spokesperson for the State Department, went on to say: "We still believe that further improvements to the process could ensure these proceedings meet domestic and international obligations. Until these obligations can be consistently met, we have concerns about proceeding with executions." Although a bit mealy-mouthed, what is being said here is pretty clear.

And then in Turkey, President Recep Tayyip Erdoğan condemned the execution of Nizami. He condemned the death sentence of a person whom he referred to as a mujahid, of someone who was over the age of 70 and of a person whom many believe "has no earthly sin." The president further stated that "the ordering of death sentences... is neither fair governance nor (representative of) a democratic mentality."

Turkey has been the only country to recall its ambassador from Bangladesh as a protest against Nizami's execution.

As if the above statements were not enough to make us question the validity of the execution, Wikileaks has also gotten into the mix: a leaked cable from the US State Department in November 2010 stated: "There is little doubt that hard-line elements within the ruling party believe that the time is right to crush Jamaat and other Islamic parties."

There is no question that the 1971 war between East Pakistan and West Pakistan which led to the creation of Bangladesh was a brutal war. It has been estimated that ten million people fled the country during this war. Rape and mass executions were common weapons used to terrorize people.

The Bangladeshi war tribunals were set up in 2009 to punish those who had committed war crimes. This was (and is) a popular move. However, there is a disturbing trend here. The people found guilty of committing war crimes for the most part are members of opposition parties; this has led these war tribunals to be perceived as little more than machines to destroy political opponents. The Jamaat-e-Islami has been one particular target of the tribunals.

What happened in 1971 was that a war started between the two Pakistans, after the partition in 1947, West and East Pakistan were geographically separated by the nation of India. It seemed logical that East Pakistan could become an independent country. However, there were many who did not want to see the two Muslim nations further separated. Fighting began, and 10 million East Pakistani residents fled to India. In response to this, India invaded East Pakistan and the war became one between Pakistan and India. When the Pakistani army surrendered in Dhaka, it is said that more than 90,000 soldiers became Indian prisoners of war.

Bangladesh became an independent country on December 16, 1971. Although Bangladeshi authorities state that 3 million people were killed during the nine months of war, independent researchers estimate that there were no more than 500,000 fatalities. Those are 500,000 deaths too many - however, there is a huge difference between half a million deaths and 3 million deaths.

So how does the Jamaat-e-Islami and Nizami fit into this terrible war?

The Jamaat-e-Islami, although originally a social/religious movement, early on started to speak up politically. The Jamaat was opposed to the Partition in 1947 and was also opposed to Bangladesh being established as a secular state. Jamaat-e-Islami, which at this time was led by Nizami, always advocated the establishment of an Islamic government; in keeping with Maududi's belief, this was to be done not through oppression, but through education and government reforms supported by the people.

After the war, Bangladesh was established as a secular state. The first thing that happened in this new secular state was that the Jamaat-e-Islami was banned. However, by the late 1970s, the party was once again allowed to participate in politics.

And then in 2013 the Bangladeshi Supreme Court decided that Jamaat-e-Islami was "unfit" to participate in elections and banned it from political life. The banning of an entire political party, en masse, is always worrying. In the words of an academic from Dhaka University, Amena Mohsin, "secular democracy accommodates all kinds of ideological parties. It is up to the people whether or not to accept a party."

What is of concern here is that the Jamaat-e-Islami, which is Bangladesh's largest Islamic party, is also a staunch ally of the

The Jamaat leadership has stated that while Nizami and the Jamaat were supporters of Pakistan in 1971, any allegation of "killing, murder and rape are not correct. The tribunal has miserably failed to prove any of those allegations' against Nizami.

Both the Jamaat-e-Islami and the BNP claim that the trials are being abused to silence opponents of the ruling party and have little to do with reparation or justice. Indeed, Nizami is only one of many opposition politicians to have been executed since 2013.

During past sentencing and executions there have been violent protests on the streets; for example, hundreds of activists died in unrest in 2013 following the execution of Jamaat-e-Islami leader Abdul Quader Molla. But this time, the heavy-handed tactics of security forces and oppression of the Jamaat-e-Islami by the government are said to have kept protesters off the streets. One spokesperson said that Jamaat-e-Islami supporters were prohibited from meeting or gathering in public.

It has also been said that the Jamaat-e-Islami and its leaders were not out in the streets protesting this time because their phones were being tapped and their families were prevented from speaking with journalists. That is, there has been systematic harassment of members of the Jamaat-e-Islami, and they are being victimized by the government.No country should be able to impose secularism, just as no country should be able to impose Islamic rule. The way a country is to be run must be the choice of the people. It must come through gradual reforms introduced by elected officials. To kill in the name of secularism, to kill in the name of Islam - these are equally heinous.

No one in Bangladesh, Pakistan or elsewhere questions that what happened in 1971 was terrible or that reparations must be made. But executing people, the taking of life, this is not the way to make reparations. And if the trial before the execution is seen by many to be unfair and biased, then this is not an execution that "will heal wounds" as the ruling party states, but one that will only further polarize the divided country of Bangladesh.What is happening in Bangladesh is no different from what is happening in Egypt. And perhaps in a number of other countries; these are issues that so often just fly under the radar. As with this story, when you watch or read the news, you get much less than half the story. We are given the glossy, happy side. Or we are given the rotten, terrible side. We are very rarely given the truth, rarely are we allowed to see both sides of the story.
Last Update: May 14, 2016 1:10 am
RELATED TOPICS