Fez: A time-honored Ottoman hat from the Mediterranean 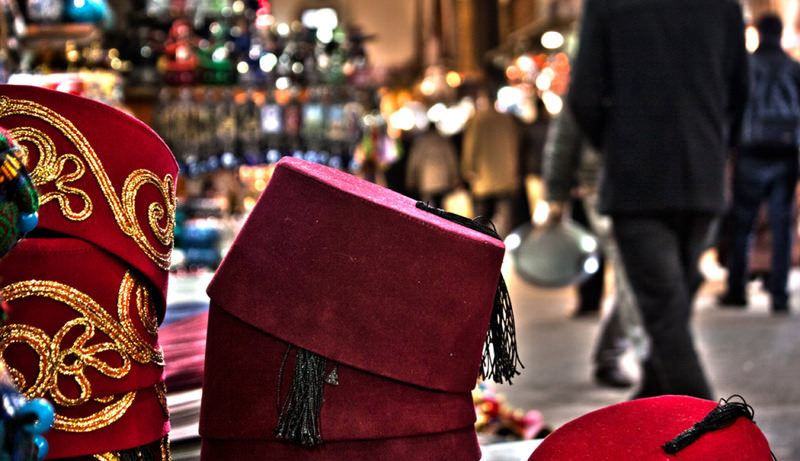 The fez used to be common headwear in Mediterranean countries and originated from Morocco. It was a popular accessory used by Ottoman elites and soldiers that became a symbol of a common Ottoman identity in the 19th century

The fez, which all Ottoman gentlemen wore for a century, also excited the attention of Europeans. For a while, the fez became a high fashion item among stylish European men and the photographs of male models wearing a fez were published in fashion magazines. Young gentlemen and even the elderly fell in love with the fez, which they called "Turk Blue." James, a character in the novel "Helen with a High Hand," by British novelist Arnold Bennett, wears a tasseled "Turkish cap" in red velvet when he returns home. Boxes of cigarettes made from Turkish tobacco, a European favorite, featured a fez to lure consumers. Even today, a cap similar to a fez is part of the uniform of some social clubs.

Marines' attire needs to be nimble and light. Ottoman fleet commander Hüsrev Pasha made his soldiers wear the fez, which was first seen in Tunisia. Ottoman Sultan Mahmud II saw this new attire of the marines in a ceremony, and ordered all soldiers and public officers to wear the fez in 1828, introducing a law requiring the wearing of a fez. The janissaries were recently abolished, and people living under the Ottoman flag detested everything that reminded them of the Janissaries. Since a connection is made between headwear and faith in Islam, a fez which enabled people to wear a turban over it was quickly accepted among public. The reforms enacted by Sultan Mahmud II took place in accordance with national structure.

This headwear, which took its name from the Moroccan city named Fez, is reminiscent of the Phrygian conical hat of Anatolia. It is a common headwear in Mediterranean countries; it was not originated from the Greeks or Hungarians, but was adapted by them later on. Evliya Çelebi wrote that Algerian men wore red fezzes. Poems were written about the fez, saying that it made a man more handsome. A song by Ottoman artist Rıfat Bey "Pek Yakıştı Eğri Fes" (A Crooked Fez Fits You Nicely) was very popular.

Previously, fezzes were imported from Tunisia; however, the Ottoman non-Muslim community later established fez factories. Feshane, the state-run fez factory, was founded in 1836. The Hereke Feshane of Sultan Abdülhamid produced fezzes of high quality. Moreover, high-quality and expensive fezzes were imported from Austria as well. When Austria annexed Bosnia in 1908, Austrian goods were boycotted for a short while, but then domestic production fell short of meeting demand and people began to wear Albanian-style conical hats.

Since sitting at a dinner table or accompanying the elderly without headwear was considered disgraceful, a fez was also worn in houses. The fezzes varied in shape, color, tassel and ways of wearing, and were available in different styles. For instance, Sultan Mahmud preferred the long and straight fez which was called "Mahmudi," Sultan Abdülaziz wore a short fez called "Azizi" and Sultan Abdülhamid wore a long tapered fez called "Hamidi." Some people wore it up to their eyebrows while some wear it toward the back of their heads. However, the most acceptable way to wear a fez was to tilt it toward one ear.The color of the fez indicated the political view and profession of the person wearing it. Those who wore a red fez were mocked, saying that "A kite will come and pick it, thinking that it's fresh meat" because during a truce, the fez worn by the head of the İnegöl district of Bursa was stolen by a kite [a bird of prey]. If the fez was not of high quality, the person who wore it made a fool of himself; when it rained, the red color would run down their forehead, and turn the person who wore it into an "Apukurya buffoon," in reference to the Greek tradition of painting faces during the Festival of Apukurya that takes place before the Easter.

A fez was produced from broadcloth and the flat surface on top had a hole through which 2 centimeters of broadcloth was placed, and a tassel was connected to this surface. The tassel would be made from black or blue tram silk. In 1845, a law on tassel entered into force and the desired weight of public officers' fez tassel was announced. The way the tassel would swing had a characteristic grace and a meaning. In a novel by İzzet Melih, the swinging tassel of a young man who was traveling to Pera on a coach horse inebriated English young ladies. The favorable length of the fez tassel was long enough to fall to the back of the neck. Taking it to the front was the signature of roughnecks. Wearing a fez without a tassel was similar to wearing a shirt with no tie.

A fez required maintenance - it should often be brushed and shaped. The craftsmen who mold the fezzes were very busy. First, the tassel was removed and the fez was put on a yellow brass mold which was heated in the oven. Then the craftsmen sprayed water before putting it on a mold again. Five minutes later, the second mold was lifted up from its handles and the smoking fez was worn on the head. If the craftsmen, who were mostly Greek, did not have equipment for spraying water, they sprayed it with their mouths.

"Şlık" (a fez brand) fezzes, whose interior was covered with straw, took a longer time to make and maintain, and they were also expensive. In order to mold it, the straw and the silk undercoating were removed altogether. However, to avoid molding, "Şlık" fezzes which did not require molding were preferred. A fez which had not yet been molded was called "fabrika kalıbı" (factory mold). Some gentlemen had metal placed on the flat surface of their fezzes to make them look molded. Poor people would cut the corners of their fez when they got dirty, and their fezzes got shorter just like an Azizi fez. When fez was forbidden by the Hat Law, one of Atatürk's reforms, Turkish educationist and archivist Muallim Cevdet spit on his hat the way the Greek craftsmen did after he got home and took off his hat that he wore unwillingly.

The tassel of the fez needed to be combed. There were Jewish children who wandered around the streets combing tassels. The tassel was changed either when they got older or according to the fashion of the time. Children picked their tassels and played a "tassel game." There was a song that went, "I know the harbinger of doom / My tassel broke off from my fez."

Ulema (Islamic scholars) wrapped a white turban around the fez, while others wrapped different turbans in different colors. However, most people wore fezzes without wrapping any turbans. Children's fezzes were decorated with golden medals called "maşallah" or amulets for spiritual protection.War Minister Enver Pasha, of the Committee of Union and Progress (CUP), who was known for his eccentric projects, had a fez made with a crescent and star, thus making the fez more Turkish. While both soldiers and civilians were wearing the fez, Enver Pasha made soldiers wear head gear called "kabalak" during World War I, which had a brim resembling the helmets of British officers. Although headwear with a brim were considered as disbelief by the Ottoman public, Enver Pasha thought he would be able to avoid a public reaction. However, the Ottoman public mistook the Ottoman soldiers wearing this "kabalak" for foreign soldiers.

At first, Kemalists wore calpac as a protest to Ottoman authority in Istanbul and the fez. They would wear it where its two sharp corners come together. After the establishment of the Republic of Turkey, they left the wearing of the calpac as it recalled the Bolsheviks. After Russia reconciled with Europe, Moscow and the Turkish government stopped being friendly.

Adopted in 1925, an unprecedented law ordered men to wear brimmed hats. Penalties were imposed on those who opposed this law. Wearing a fez was considered a crime. However, the tradition of wearing a fez was maintained in other countries like Syria, Iraq, Palestine, Egypt, Western Thrace, Macedonia and Bosnia, all countries which used to be part of the Ottoman Empire. The fez has never lost popularity in Tunisia, Libya, Morocco and Algeria. Moreover it is generally seen as a symbol of the Ottomans and the Turks. In 2015, the article obliging the use of hats was abolished with a legislative amendment proposed by Altan Tan, a deputy of the Peoples' Democratic Party (HDP), however the law abolishing the wearing of the fez is still valid.