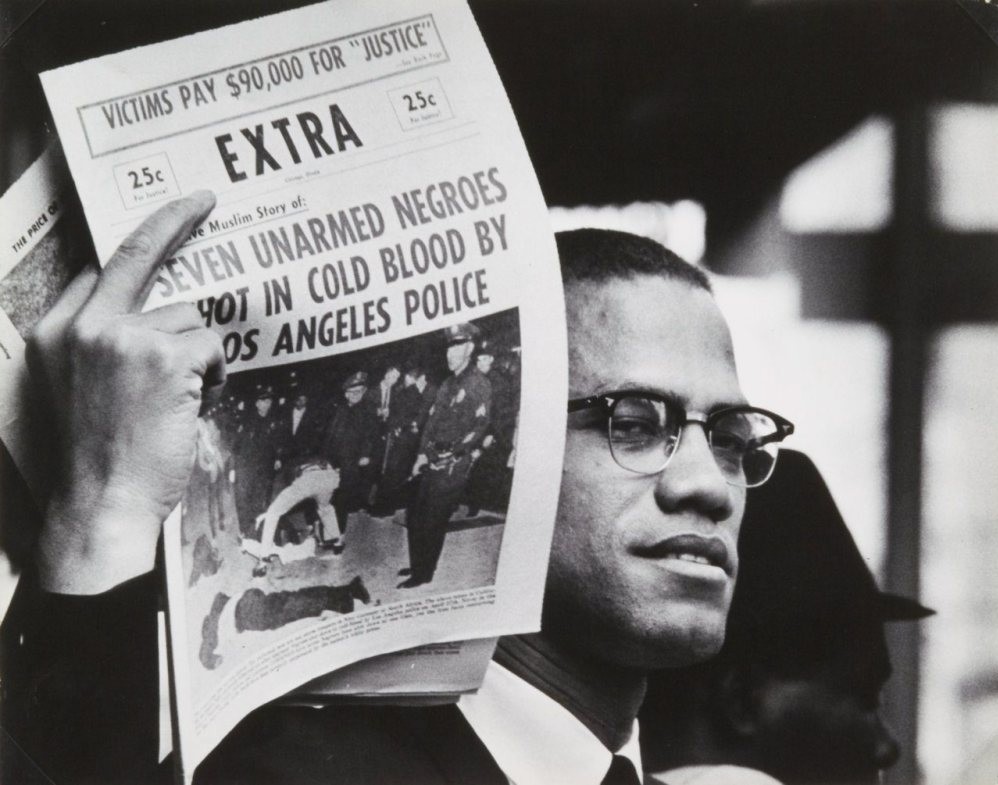 Fifty-one years after his death, Malcolm X continues to be a source of inspiration, not only for black Americans but for all people fighting for human rights

A heroic figure for blacks from all over the world, Malcolm X is still an influential name in human rights. Despite living a short life, he left a deep influence not only on blackAmericans but on people around the world. This legendary man used the turning points of his life to persuade followers with sincerity and support for black Americans and the oppressed people in society who had been disenfranchised.

On this day in 1925, Malcolm X was born with the name "Malcolm Little." He was a child who struggled for his existence from birth. His father, Earl Little, was an activist of the black movement and killed by Ku Klux Klan members when Malcolm X was 6 years old. His mother, who had both black and white origins, was institutionalized for mental illness.

During his high school years, Malcolm X was enrolled in a school with a white majority. He was among the brightest students in his class and inspired by his father's role as an activist, dreaming of becoming a lawyer. However, after his teacher told him that being a carpenter was more proper than being a lawyer for a black American, he dropped out of school. He went to live with his sister in Boston where he learned to earn a living as a hustler and was later charged with robbery and sentenced to 10 years in prison in 1946. During his time in prison, he became Muslim, reading books and joining the religious sect of Elijah Mohammed known as the Nation of Islam (NOI). The sect is known to have racist ideology, defending the supremacy of black Muslims over white people. After six years, he was granted provisional release and became one of the leaders of the movement. In 1958, he married Betty Sanders and they had six children. Later, in 1964, he declared his independence from the NOI, went on a pilgrimage to Mecca and converted to Sunni Islam, leaving the hostile anti-white ideology of the sect behind and adopting an egalitarian perspective for all. Malcolm X founded the Organization for Afro-American unity prior to his death on Feb. 21, 1965, when he was assassinated by three members of the NOI during a rally in Harlem. During his life, he made two trips to Africa and gave numerous speeches about the liberalization of black people and all oppressed people. Namely, "The Autobiography of Malcolm X" is one of the most influential pieces of nonfiction of the 20th century.

For Malcolm X, the problem is that the black were integrated into a system as subalterns. The activist had grown to despise white people who did not want to see blacks in their schools, businesses and the workplace, restaurants and even toilets, labelled as inferior. Black Americans were in a secret civil war and, in the beginning, Malcolm emphasized that they were, "the former Africans who were kidnapped and brought to America." So, he took the surname X to refer to his unknown origin from Africa.

When he was in Mecca, with his new name Al-Hajj Malik El-Shabazz, he wrote a letter to his loyal assistants in Harlem that must be read well. A passage from his letter reads, "I could see from this, that perhaps if white Americans could accept the Oneness of God, then perhaps, too, they could accept in reality the Oneness of Man - and cease to measure, and hinder, and harm others in terms of their 'differences' in color... America needs to understand Islam, because this is the one religion that erases from its society the race problem. I have never before seen sincere and true brotherhood practiced by all colors together, irrespective of their color." We see two Malcolms. One who was born into a corrupted American society and another who was born into Islam who is anti-racist.

The biggest achievement that he gave to American people of color was the courage to express themselves. He contributed to valorization of black identity, giving a voice to the problems of the black and the frustration they felt due to racism. He defined clearly the price America would pay if blacks were deprived of their legitimate and basic human rights. During the Civil Rights movement from 1955 to 1968, his teachings were part of the foundation on which blacks built their movements as well as a source of inspiration for black art.

A survey by the Survelum Public Data Bank shows that Malcolm X still has significant influence on both black and white youth. The survey carried out on 18-24 year olds from nearly every ethnicity and religion in the U.S. asked participants if they knew a well-known African American activist. Malcolm X is still among the most well-known black activists. Fourteen percent of participants agree with his philosophy while 14 percent do not. The participants were asked, if Malcolm X was still alive, would he be accepted in society or not. Results indicated that 43 percent said "Yes," 14 percent said "No" and 29 percent gave no answer. What is so striking about the survey result is that it seems he would have the same influence today as he did back when he was alive.

A model for Obama

Leaving aside the strange claim that Malcolm X is the real biological father of U.S. President Barack Obama, the late activist certainly has an effect on Obama. In 1995, Obama described the influence that Malcolm X had on his life in his memoir, "Dreams from My Father." There were also rumors circulating that Obama is Muslim because he has another name, Hussein, and that his father is a Muslim. With his inclusive style, Obama's political attitude mimics that of the last period of Malcolm X and the two figures are almost in the same wind. Five-hundred years of pain found voice in Malcolm X. Obama is the product of what black Americans have endured in the last 500 years.

If Malcolm X was alive and Donald Trump was president, what would he do? He has such a powerful effect that even Katrina Pierson, the spokeswoman of Trump, said that he is her freedom fighter hero on Twitter in 2013. As a charismatic leader, he seems to overshadow Trump.

First, let's imagine the atmosphere in the U.S. on the eve of the presidential race. In 2015, 1,134 black citizens were killed by the U.S. police. According to The Guardian, black people were killed by police at more than twice the rate of white people in 2015. The Sept. 11 attacks and the violence imposed by radical terrorist groups caused Muslims all over the world to be exposed to discriminatory behavior and prejudices. A recent study by the Public Religion Research Institute shows that 56 percent of people surveyed agreed that the values of Islam are at odds with American values. A study by Pew Research Center in 2015 revealed that 86 percent of blacks say more needs to be done to achieve racial equality, compared with 53 percent of whites. Nearly three-quarters of black Americans, 73 percent, along with 58 percent of Hispanics, although whites are far less likely to say racism is a big problem at 44 percent.

According to Norman Ajari of Toulouse University, what Malcolm X did was all about identification and deconstruction of white political thinking that was hegemonic. On the other hand, white hegemony is exactly what Trump is trying to refresh. He is trying to place black people in a trouble making position like others in the history of racism: "I think they're trouble. I think they're looking for trouble," says Trump. Saying that the U.S. wouldn't see a black president again, Trump has proven that he couldn't put up with the presidency of Obama. Trump has a hostile attitude against all Muslims, Mexicans and migrants. So he would be stronger with all these parts of the American society for creating big social movements that were never seen before in Americas. His anti-capitalist attitude would challenge Trump also. If Malcolm X was alive, Trump perhaps wouldn't show the courage to say racist words at his campaign meetings. An important question is, if Malcolm X was alive, would he be a U.S. president or not? Why not?
Last Update: May 22, 2016 12:28 pm
RELATED TOPICS