Turkish female captain spends a life on the high seas 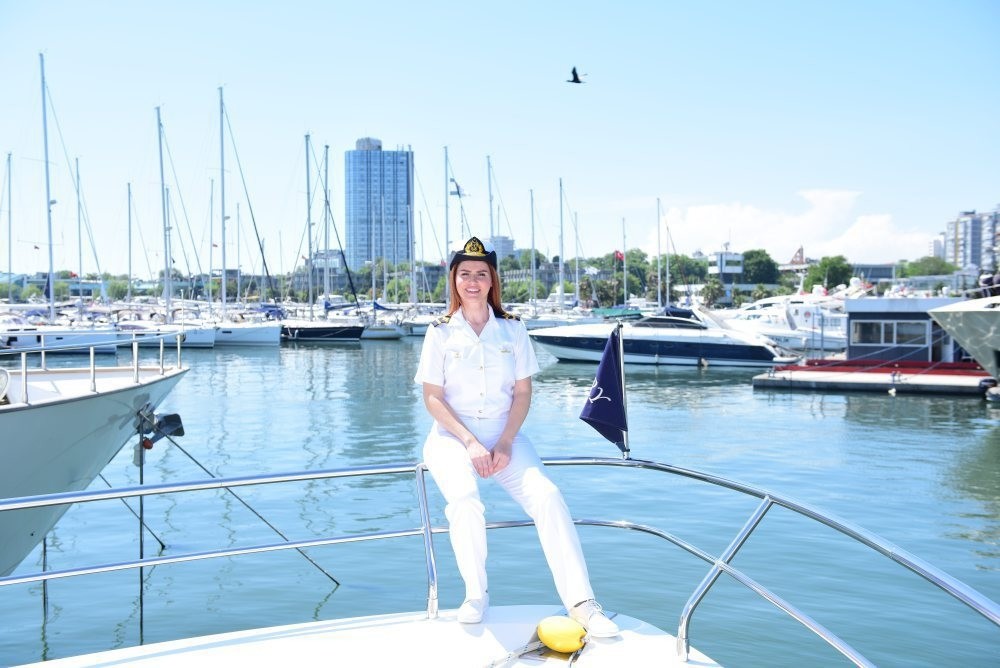 One of Turkey's first female captains, Aybike Alev Yanar, left home at the age of 17 to go after her lifetime passion of sailing. She has passed over the equator 10 times and has visited dozens of countries around the world. She has had to leave many things behind, however, as sailing the oceans is not an easy task as she first imagined

Aybike Alev Yanar, one of the first female ship captains in Turkey, is recently celebrating passing over the equator for the 10th time. She sailed through stormy oceans for nine months without stepping a foot on ground. When Yanar was a little girl, she moved her finger across the world map on the wall of her room and dreamed of the places that she would visit one day. She marked the places that she wanted to go to on the map and fell asleep while looking at the pictures of ships on her walls that she cut out from magazines and newspapers. According to Yanar, she pictured herself in her dreams as a master mariner most of the time, but sometimes she became a diver or set sail on a tour of the world. She fell under the spell of freedom and the deep blue after meeting with Captain Nemo. She read everything on maritime adventures and promised herself that one day she will be a captain and sail to Australia.That little girl is now a decorated 32-year-old woman. I met Yanar at Ataköy Marina in Istanbul and she was wearing her snow-white captain's uniform. Yanar loves her profession; she began to tell how she became a captain, even though it is a male-dominated profession, why her family objected to her decision to be a captain and her extraordinary journey.

"When I told my father that I would be a diver and a captain when I grew up, my father told me that I cannot leave his side as long as he lives. However, I left home at the age of 17 and traveled the world until now," she said. Yanar was not able to tame her passion for the sea. As such, she decided to run away from home and enrolled in the Academic Maritime School. "It was a private school where I had to pay my tuition. I told them about my dream to become a captain and managed to secure a full scholarship," Yanar said. The school administration also assured her father by saying that she does not have to work on ships, that she can work in the office instead. When she donned her uniform following two years of training, her father was very proud. "My first notable professional experience was captaining Mustafa Kemal Atatürk's yacht, 'Savarona,'" she said. "When my family learned that I was working on the yacht of the founder of the Republic of Turkey, they bid me farewell to France with pride. While I was working on the Savarona in Cannes, France, my legs were shaking. I worked on the yacht for five months. I was incredibly happy. I can say that my dream of being a mariner kicked off with Atatürk."

Following her first experience, Yanar began to work on huge ships including large container ships weighing 450 tons, tankers carrying chemicals and dry cargo ships. She said she was the only female crewmember on the ship. One of the biggest problems that Yanar experiences while working is the feeling of loneliness. THere have been times she did not set foot on solid ground for six or nine months during her long missions in the oceans. While the male crew was socializing, she returned to her cabin and read books. "From time-to-time, I had to confront the hardships of being a female captain or sometimes I had to fulfill a duty that a male cannot overcome," Yanar said. Just because she is a woman, she was even exposed to mobbing and was asked to finish a job in one day by herself - even though it is a three-day job for a man. However, Yanar became more and more ambitious and was driven to become successful at sailing, which has always been a male-dominated profession. She managed to complete every duty without feeling discouraged. For six years, she followed a dream on the huge ships in the oceans: She passed over the equator 10 times and harbored huge ships that male captains have a hard time doing.Yanar faced danger in the oceans and escaped death many times. She has almost traveled the world over as well. "I went to the Caribbean, Egypt, Italy, Libya, Israel, Spain and the harbors of Venezuela. I cannot even count all the places I have been to. I traveled the world but the sailing sector is ruled by the people from the Black Sea. I have always been told that women cannot become captains and I have no place on the sea. However, I have a passion for the sea. When I set foot on land after returning from the ocean, I cry a lot. I call maritime companies all the time and ask them to let me sail," Yanar said. She left working on giant freighters five years ago. While she was sailing next to the Libya coast, at a time when the war in Libya broke out, she decided to bid farewell to the oceans as she was sitting onboard the ship in filth. "I experienced my youth here and do not want it anymore," she said. She is currently working as captain as she cannot totally keep herself away from sea. Sailing was such a big passion for her that she even left her boyfriend for this. Yanar is currently working as a sailing lecturer at a private university in Northern Cyprus.
RELATED TOPICS