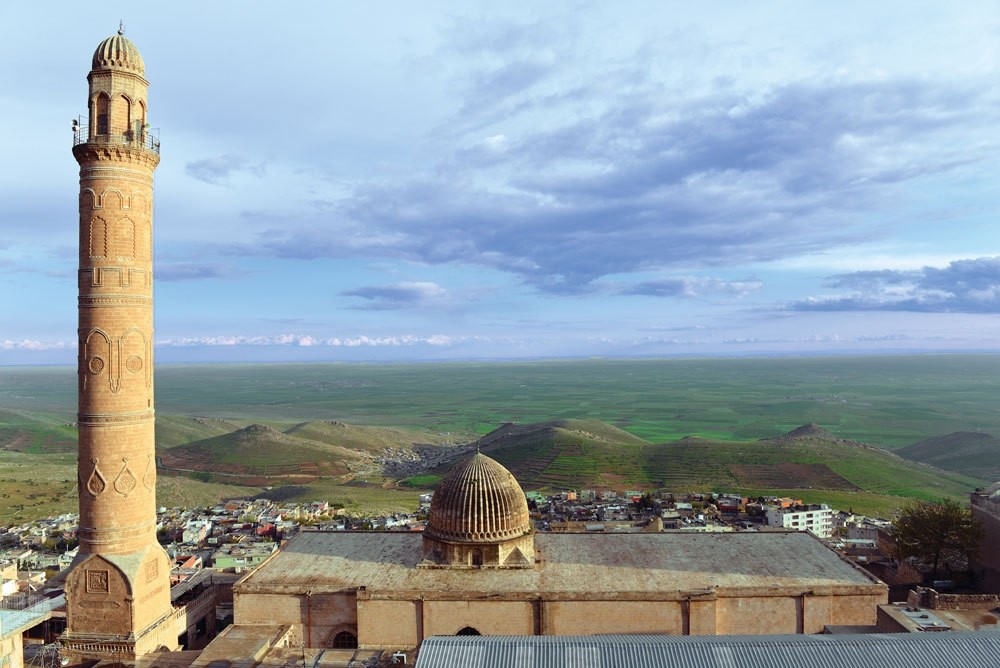 Among Anatolia's oldest Islamic architecture, grand mosques, specifically built in city centers, add to the cultural heritage in Turkey. A new photobook brings together more than 100 grand mosques from across the country with striking photos and detailed information

The grand mosques located in every corner of Turkey are among Anatolia's oldest Islamic structures. Constructed specifically for Friday prayers in the historical centers of the cities, the grand mosques are also historic and cultural heritages that have been passed down to our time. Turkey's Supreme Council for Culture, Language and History Atatürk Culture Center (AKMB) has carried out research regarding this point. A total of 700 photographs were chosen from 10,000 photographs taken in 118 grand mosques around Turkey, and collected in one photobook titled "Turkey's Grand Mosques." The photographs are currently on display at Ankara Kızılay Metro Arts Center until June 11, and will soon tour around Turkey. Art historian and photographer Mustafa Cambaz added details to the book describing the grand mosques. Regarding why they decided to make an album of photos from these grand mosques, which have unique value in terms of the history of art, AKMB Vice President Şaban Abak said: "The works in the grand mosques have been beautifully passed down to the present day, including their minarets, minbar (pulpit), mihrab (prayer niches), ceramics, stone and wood works and carpets. We wanted to draw attention to the value and beauty of these excellent art works by capturing them with a camera, and prepare the 'Turkey's Grand Mosques' photography album in order to preserve and revive our cultural heritages in question." Among the mosques featured in the album, here are some of the most striking: 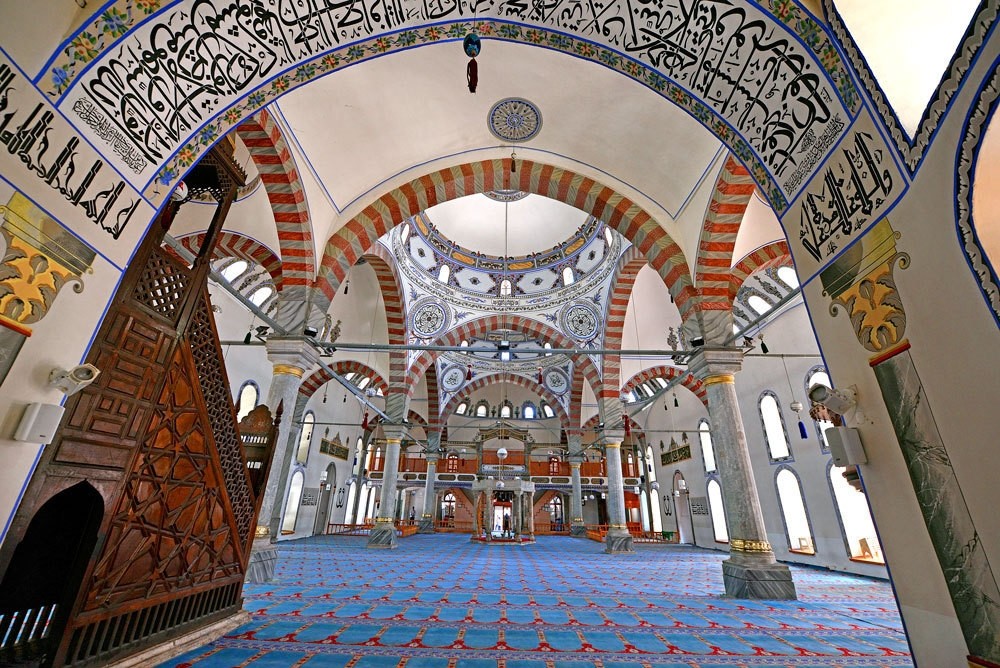 Ottoman-era traveler Evliya Çelebi defines Kütahya's Grand Mosque as a wooden pillar mosque in his famous "Seyahatname" (Book of Travels). This mosque, whose construction presumably started during the reign of Ottoman Sultan Bayezid I, is 600 years old. Although Kütahya was and remains important as a center for the production of ceramics, no ceramics were used in the grand mosque, except for ceramics depicting the Kaaba over the mihrab. The hand-carved botanic motifs on the window frames and top roof of the mosque reflect typical decoration from the period of construction.

Among the structures within the city center, Mardin Grand Mosque, has a rectangular plan with three naves in parallel with the mihrab, and a cloister in the north. Its courtyard can be reached through the eastern and western gates. Various plans and architectural buildings ranked around the courtyard were constructed in different periods. There is a seven-line tablet behind the fountain, depicting its maintenance during the Ottoman period. The mosque's main mihrab was arranged as a deeply engraved double-stage niche. The hand-carved sharp arches, with botanic ornaments, which belong to the earlier periods, are quite striking. The dome, located on a four-window octagonal pulley, seems like it has an externally cusped form. 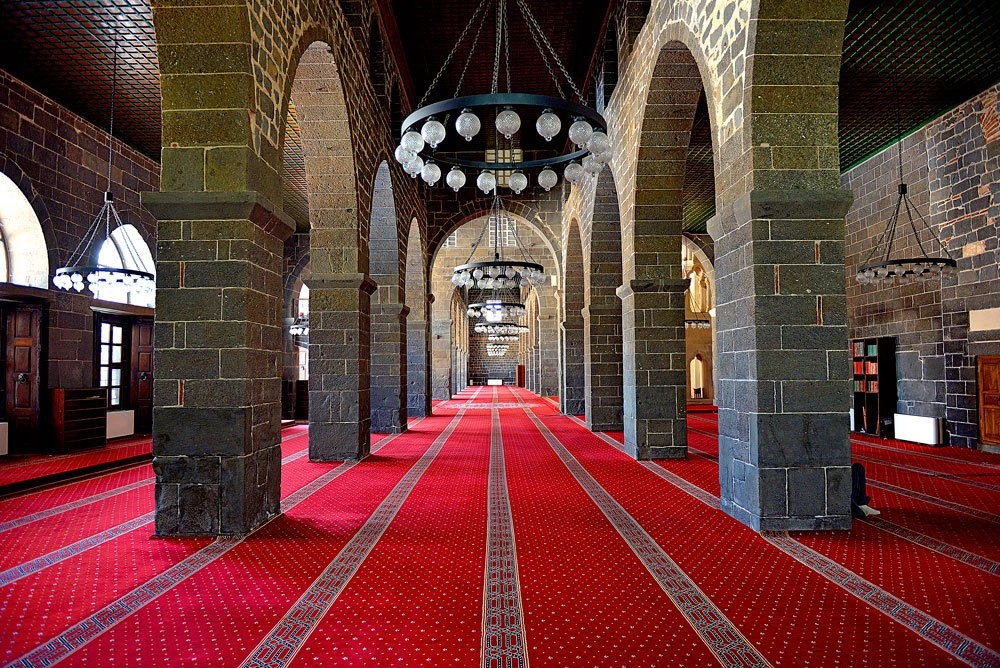 Thought to be constructed in Diyarbakır's Silvan district in 1031, Silvan Grand Mosque was later learned to have been built by Emir Necmeddin Alpı, son of Timurtaş of Artuqids, between 1152 and 1157, according to a tablet at the dome's foot. The mihrab in the eastern side of the south gate was built during the Ayyubid era. Silvan Grand Mosque is a rectangular mosque with four niches in parallel with the mihrab, and a dome is located in front of the mihrab. While its eastern gate is quite decorative, its western gate has a simpler design.

Located in the middle of Old Afyon on the southwest side of the hill where the Afyonkarahisar castle was built, the wooden-pillared Afyon Grand Mosque was built in 1272, during the period of the Anatolian Seljuk. It has a crooked rectangular shape, made with rubble stone. Belonging to the category of wooden pillar mosques, which have reached our time from the Anatolian Seljuks, Afyon's Grand Mosque is among the most important structures of the era, with its original architecture. Even though it is known to have geometrical, botanic, written and figured hand-drawn ornaments on caps with muqarnases (stalactites) and wooden beams and wainscots, very few have reached our time. The only surviving ornament known to have bird figures can be seen at the mosque. 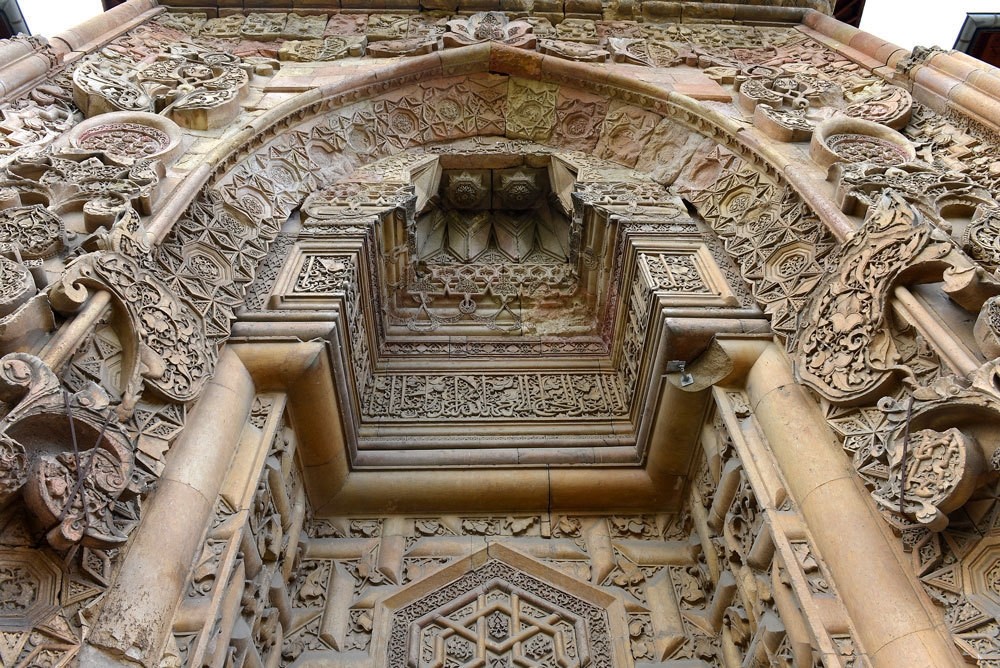 Built by Emir Hüsâmeddin Ahmed Shah of Mengücük and his wife Turan Melek in Sivas's Divriği district in 1229, Divriği Grand Mosque was constructed from face stones (ashlar). There is a hospital (dârüşşifâ) in the mosque's direction of Mecca and a tomb within the hospital, detached from the mosque. Along with three diwans and a cloister, the mosque has a two-story plan along the western and southern sides. Located on a cross-rectangular area, the mosque has a portal with rich ornaments in different patterns on the western and northern sides. The portal in the grand mosque's western side has a monumental form, with magnificent botanic and geometric ornaments. There are 16 sarcophagi in the tomb. The decorated sarcophagus is thought to belong to Ahmed Shah.

Also known as Atabey Mosque, Erzurum's Grand Mosque is thought to be built by Ebü'l-Feth Mehmed at the request of Emir İzzeddin Saltuk's son, Melik Nasiruddin Muhammed, in 1179, according to a long-lost tablet. The mosque made of face stone is in horizontal rectangular shape. The hooped dome of the structure divided into 7 niches was made of wooden materials called "swallow roof." Just like Kayseri's Grand Mosque, Erzurum's Grand Mosque has earned its place among Turkish art with its stone ornaments with geometric motifs and an architectural understanding, which gives weight to the central space, where one finds the mihrabs of the grand mosques.
RELATED TOPICS