Dates: The sacred fruit during Ramadan

As a symbol of abundance, dates are a very popular Ramadan staple native to the Middle East and Prophet Muhammad used to advise eating them while breaking the fast. Dates are a rich source of fiber, potassium and calcium, which help keep the body healthy

Dates, a fruit that grows in tropical and dessert climates, have an important place in Middle Eastern and North African cultures, as they mostly grow in these regions.

Both dates and date palms are considered a symbol of power, triumph, abundance and faith. Dates are a recurrent feature in art and clothing designs. The walls of Solomon's Temple were said to be decorated with date palm motifs. In the Old Testament's Book of Psalms, a person with good deeds resembles a date palm. Holding a date palm branch at holy festivals is a command in Judaism. Those who welcomed Jesus Christ in Jerusalem were also holding date palm branches in their hands. Christian pilgrims who bring dates from Jerusalem are frequently called "palmers" in Europe. 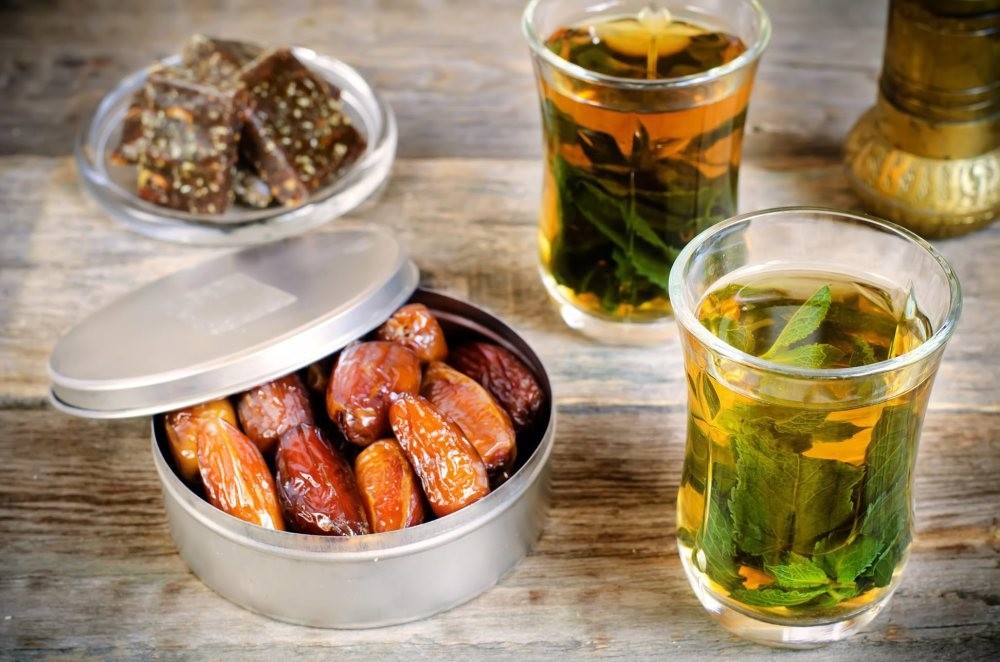 The Quran mentions dates 23 times. It is a symbol of wealth and abundance and has a special place in Islamic history and cultures. Indeed, Muslims consider date palms and their fruit are sacred. In Arabic, the word for date palm is "nahle" and its fruit is called "tamr." However, in Turkish the word for date is "hurma," because it means "respect" in Arabic. Dates have a very special place in Turkish culture as it is easy to understand their importance from the name.

The sultan of iftar

Dates are a staple on iftar tables during Ramadan. Prophet Muhammad's humble iftar table always had dates. At iftar time, Prophet Muhammad used to break his fast with either a few fresh or dried dates or a sip of water. Since fire is believed to be a sign of wrath, he preferred to break the fast with raw food- untouched by fire. If there were no dates on the iftar table, he began with water, salt or olives.

Prophet Muhammad said a faithful Muslim resembled a date palm and ate dates with bread as a meal by itself. He used to eat odd numbers of dates and took out their seeds with his index and middle fingers. He advised eating fresh and dried dates together because he believed that the devil feels discomfort when an individual lived long enough to be able to consume both the fresh and dried versions of a fruit.

Prophet Muhammad once advised his friend Sa'd ibn Abi Waqqas to mash dates and consume it after mixing it with milk and oil. This is called "fariqa," and women who had just given birth drank it. Dates are not just a fruit, there are many meals and desserts made with dates in Arabic cuisine as well as many others. The importance of dates is not peculiar to the holy month of Ramadan. Distributing dates instead of candy during Mevlid recitations in Hijaz was a tradition. The most precious gifts brought by pilgrims from Mecca are "zam-zam" water and dates.

There are different types of dates, of course, the best and most precious one is the round-shaped, curled, black "Ajwa" which is grown in Medina. Prophet Muhammad planted a date tree and recited an abundance of prayers. He said that those who eat seven dates on an empty stomach in the morning will be protected from any poison and ill-wishes.

Prophet Muhammad once said: "Respect date palms, which are your relatives [aunt]. Because the first date tree was created with the same mud from which Adam was created." Perhaps his words are a sign that date palms are superior to any other plant.

Ahmad Sirhindi (a.k.a Imam Rabbani), who was the most well-known Sufi in India in the 16th century, referred to the prophet's words in his 162nd letter: "Community and justice are at the core of the creation of the date palm. This is the same for human beings' creation. Prophet Muhammad said dates have abundant features because they have everything [beneficial] inside. When dates are eaten, they become a part of a person and [its benefits] are transferred to that person. The date's supremacy can also be found in the person who consumes it. Those who eat dates as it was praised by the prophet benefit from it both earthily and spiritually."

Dates are as important as camels are for people who live in deserts. Since dates do not spoil and are resistant to bugs, they keep well. The substantial fruit can be eaten fresh or dried or it can be pressed for its juice. The branches of date palms are used to cover roofs and the fronds' fiber is used as paper or to fill mattresses. Timber is made from date palms, which can be as tall as 20 meters, and walking sticks can be made from its branches. The fiber is also used to weave rugs and baskets. Date seeds usually serve as animal feed, but it is also possible to make prayer beads from them. Wooden barrels made from date palms makes fermentation easy, hence the prophet forbade storing grape juice in these barrels.

Date palms are elegant, and their fronds grow on top like a flamboyant crown. The palms can be either male or female and their fruit grows in bunches. Date palms begin producing fruit after four to five years and lives up to 150 years. Since the date palm roots spread out wide, they can easily use shallow water in deserts. Missionaries took date seeds to the Americas.

Dates might be one of the most beneficial fruits for humans. According to modern medicine, dates have 10 element which are crucial for humans to stay healthy and fit. The sugar in dates is fructose as opposed glucose, and does not make people fat. Vitamin B6 soothes the nerves and is abundant in dates. Physicians advise the elderly and those with stress to eat three dates in the morning, afternoon and evening. Dates also contain magnesium, which strengthens muscles and is good for pregnant women and to prevent cancer. Dates are also highly nutritious. In 100 grams of dates, there are 1.5 grams of protein, 50 grams of carbohydrates and 225 calories. This is why they are beneficial for those who work in jobs requiring either physical or mental effort or suffer from exhaustion or weakness due to illness. Dates are also good for anemia, tuberculosis and bone problems thanks to their levels of phosphorus, calcium and iron.

Today, around 50 types of dates are available. The cheapest ones are produced in Iran - they are very soft and have a muddy color. Tunisian dates, which are light and bright and have thin skin, are quite valuable. In terms of price and quality, Median dates are between Iranian and Tunisian dates, but they are the most consumed in Turkey. It is because people in Turkey consider dates a sacred staple. It is difficult to find Sudanese dates, which have a solid skin, good smell and are delicious, and dates grown in California and Israel in Turkey.