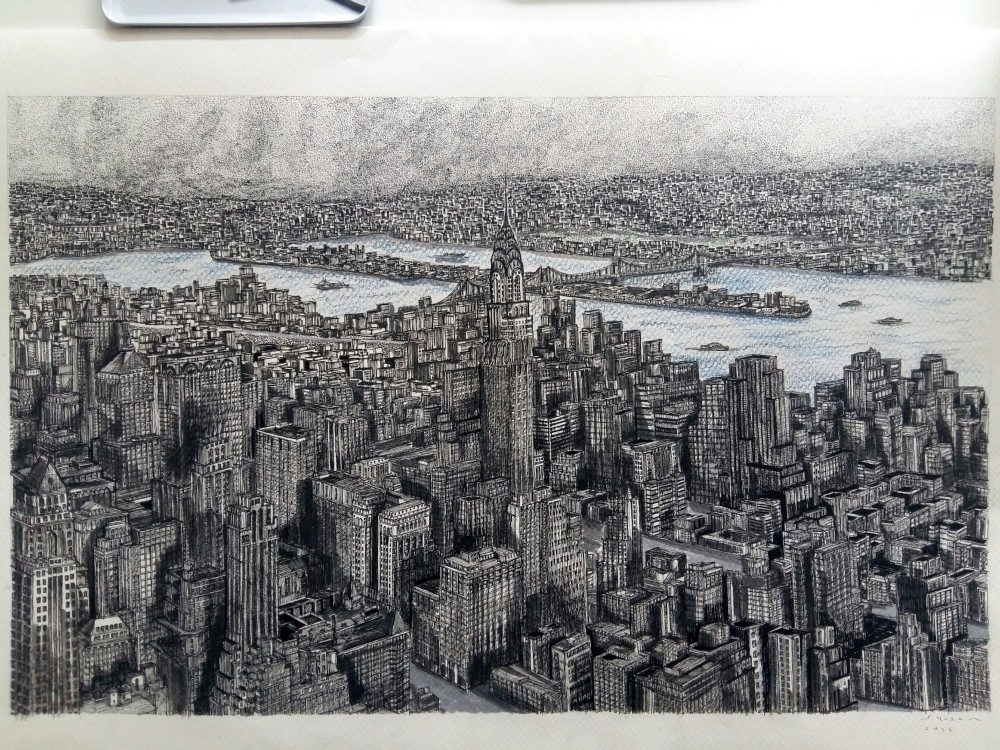 When the biographies of artists are examined, in most cases, artists' talents surface at a very young age. Some did not put aside their pencils and paper, while some got caught by the magic of colors and began to draw. On the other hand, others were passionate about music and played an instrument whenever the time was found. However, not everybody discovers their artistic talents while young; rather, some discover it later in life. One such person is 23-year-old Sümeyye Yuşan who is involved in urban drawings. She studied graphic design in high school, and when she was a high school senior, she went through an inner conflict. She saw everybody around her studying very hard for the university entrance exams, but she felt uncomfortable: "Everybody was hectic, and I told myself that I had to do something. Since I was a graphic design student, I thought about preparing for departments of graphic design in universities. I had a chance to work in a workshop in Bursa where I worked while completing my high school internship. I worked really hard until I finished high school, and I enrolled in a painting course to help me with the aptitude tests for universities," Yuşan said. 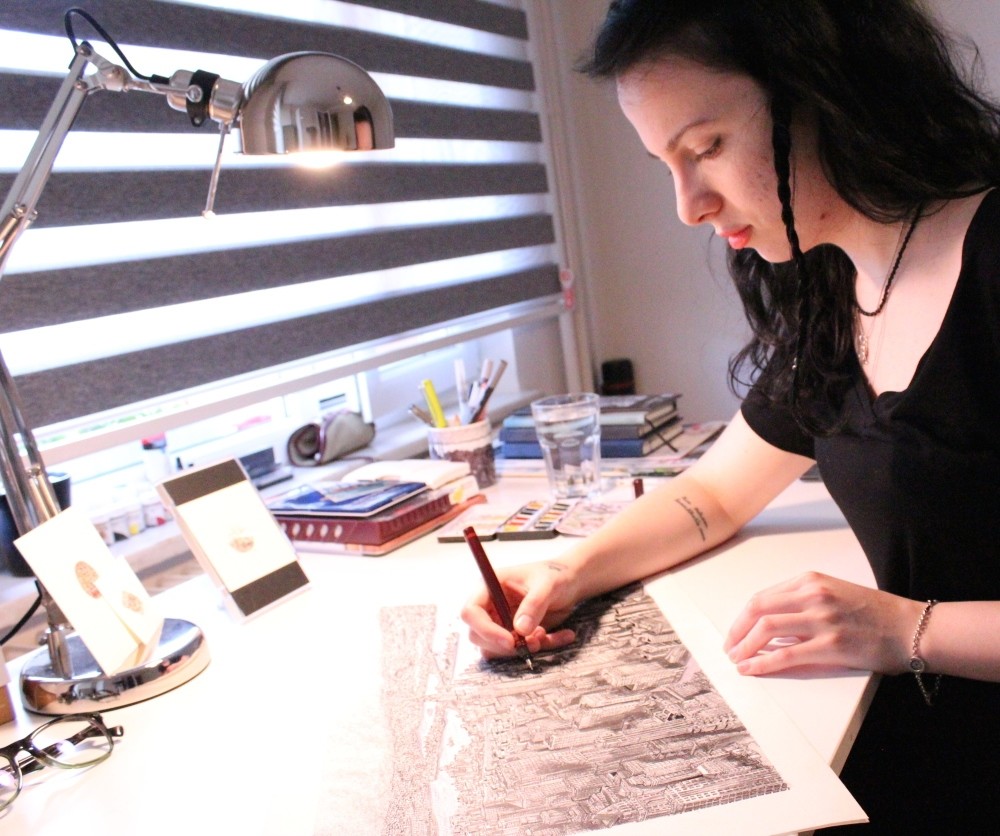 Yuşan's hard work paid off, and she managed to get into Sakarya University Fine Arts Academy's Department of Visual Communication Design. However, she always felt a little bit of distance between herself and graphic design. What's more, she always felt bad about not being accepted in the department of painting.

When she enrolled in an illustration class in her sophomore year, Yuşan's life took a different course. "The illustration class changed my life," Yuşan went on to say. "We had the freedom to draw whatever we wanted. I began drawing for the first time in this class and drew my first cathedral. I really enjoyed this experience, and I continued to draw buildings in a more detailed way." In time, Yuşan began to use her own techniques in her drawings. From the very beginning, she set off on a journey of self-discovery. She began to draw constantly and became anti-social instead of spending time with friends just to draw more and more. She locked herself in her room all night long and worked on her urban drawings. 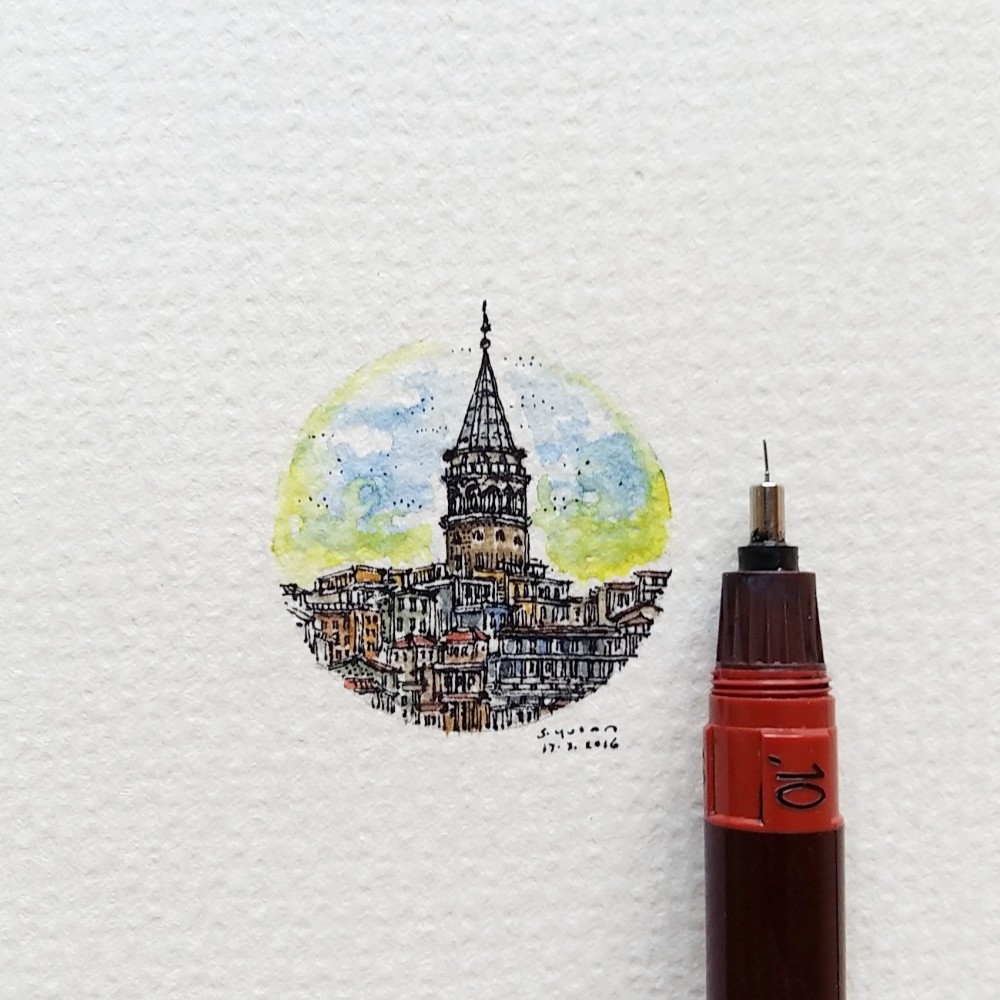 "At last, drawing turned into a passion, a source of love for me. As I discovered myself, I came up with new drawing techniques and began to make observations," said Yuşan. To make more observations and promote her work, Yuşan began to make use of social media and published her work on her Instagram account (available @yusanss). The number of her followers from around the world interested in her urban drawings increased with each passing day. She also had a chance to study others' works on social media, and receiving "Likes" for her work encouraged her even more. "My pen became stronger," she said.

In 2014, Yuşan also had a chance to observe the work of an artist from Britain, Stephen Wiltshire, who is also known as the Human Camera, when he drew the skyline of Istanbul from his memory. "I learned so much about urban drawing as I watched him draw. He is my idol. I also began to add more details to my drawings because I find myself in details as I draw, and find peace as well. I talk and express myself through my drawings," Yuşan added.

At the very beginning, Yuşan used to draw bigger drawings, yet she turned towards a minimalist style, as her drawings became as small as 3.5 centimeters. Her miniature drawings illustrate Istanbul, her hometown Bursa and the cities that she has been dreaming of visiting like New York, Hong Kong, Paris and Milan. "I lose myself while drawing. Sometimes it takes a week, and sometimes it takes a day. I do not want to leave my desk before I finish a drawing," she went on to say. Some of my friends praise my patience. "And I say drawing is a kind of therapy for me," Yuşan said, adding that one day she wants to work with Wiltshire and draw together.