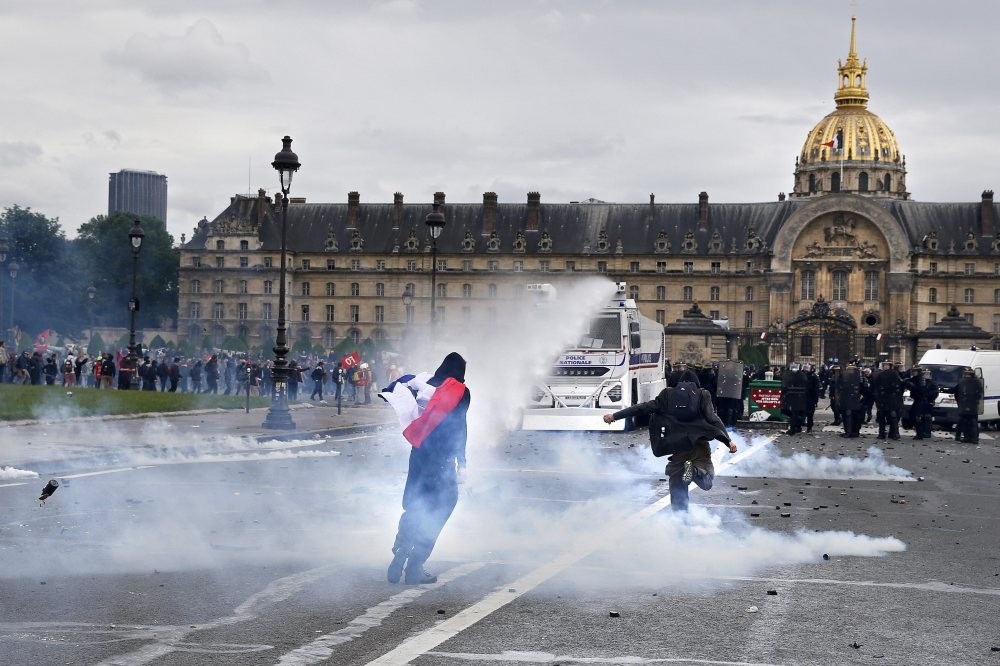 French riot police use water guns during clashes with protestors as part as a national demonstration and strike against the Labor Law reform in Paris.
by Jane Louise Kandur Jun 25, 2016 12:00 am

Globalization is the process of which our world becomes a ‘global village' and we all become ‘global citizens.' It is a process driven by the rule of multi-nationals, spearheaded by the spread of ubiquitous hamburger chains; with globalization we see the same clothes stores in every major city, we sit down to watch the same television series. All over the world people tune into a Jersey baker making cakes, a Scottish chef berating amateur cooks, or police hunting down criminals in New York, Los Angeles or other major American cities

Globalization is aided by new technology and driven by consumer hunger. While globalization on a commercial scale threatens local businesses and individuality, religious globalization blurs the lines between major religions; in turn, cultural globalization negates centuries of tradition. Paradoxically, educational globalization brings the individual and his/her rights to the fore. However, this individual is someone molded and designed on a global scale. The complex and contradictory phenomenon of globalization is unique to the twenty-first century....Or is it?

To a certain extent, yes. When my generation was growing up the world was huge. I can attest to this, as I grew up in a nation that was far from where my parents had been born, from where my grandparents lived. We never rang our grandparents unless someone had died or was very ill. Rather we sent and received letters via the post,that almost now defunct public service. Travelling by plane was just too expensive, and only on rare occasions did people fly abroad. However, today, we can skype/phone/ or WhatsApp with friends and relatives all over the world, communicating instantly. We jump on planes at a moment's notice, without thinking twice about it.

Is globalization a bad thing? Is it something that we should be wary of? Should we be destroying the machines of globalization to save humanity, or would any attempts to do so be merely latter-day (or neo-) Luddism?

In the 80s I studied in the Soviet Union. There were no brand names or chain shops there. No burger shops, no cola, nothing that was recognizable to a good capitalist kid. We Westerners longed for instant coffee...we hungered for junk food. (Well, we hungered for food in general...but this was the end of the Soviet Union, and we were in Voronezh, which was a rather small city, and thus most types of food were hard to find). Four years ago I returned to Moscow; I barely recognized it. There was a traffic jam near Red Square. There was a traffic jam on the wide avenue running in front of Rossiya Hotel. This was a street we used to stroll down the middle of because, other than the odd Lada (probably driven by or for a member of the KGB) there was no traffic.

Moscow now looks no different than any other major capital anywhere else in the world. Traffic jams everywhere.

And even more shocking, I found out that in Voronezh, the small industrial town in which we had studied, there is a Hilton hotel. When we were there, Voronezh had a university and a train station. It probably had some industry, but we were never allowed to see it. It had a big river where people fished, summer and winter. And that was about it. Voronezh was a town we walked through and learned by heart. It was a town in which we as foreigners were limited to a 9 kilometer radius. We could not travel beyond that radius. Every step we took was watched and monitored. And now Voronezh has a Hilton...the mind boggles.

Globalization has eliminated the differences. There are many arguments that globalization is a form of neo-colonialism. That it is a poorly disguised attempt to subdue the world to one order; through commercial enterprise, through consumerism, all the people of the world now all want the same things. And these things are only offered by a few global companies.

Even education is being globalized. Today students in almost any part of the world can participate in the International Baccalaureate or the International GCSEs and A levels. While these programs are flexible and the local education provider can adapt the curriculum to suit their own needs, they nonetheless offer a globalized education.

Is globalization a bad thing? Is it something that we should be wary of? Should we be destroying the machines of globalization to save humanity, or would any attempts to do so be merely latter-day (or neo-) Luddism?

There are some serious problems with globalism. Many academic papers have been written on this subject, and many conferences have been held. I am no expert in post-colonialism, and this is not the place for a deep, intense discussion of the pros and cons of globalism.

However, there are a few simple truths: globalism means that international competition (i.e. the introduction of large multinational chain stores) leads to the closure of local businesses. Quite often in order to remain competitive, local producers eliminate overheads, getting rid of simple things like health insurance, over-time, etc. This leads to what is known as the "race to the bottom" in lesser developed countries.Globalization also pushes multiculturalism; however, like the individualism that actually promotes conformism (or conformism with an "individual flavor"), it has been argued that multiculturalism propagates Western culture. Alternative cultures are converted, repressed or assimilated. The ideals held aloft by the mass media means that local traditions are seen as "backwards" or "regressive"; the result is discontent with what is local and a desire for that which is seen as Western or modern.

Another problem with globalization is the global brain drain. This phenomenon can clearly be seen with the Syrian refugee crisis; it is the doctors and engineers who are eagerly snapped up by certain European countries. This means that developed countries increase their skill sets, leaving lesser developed countries struggling to catch up.

So... globalization is just a new form of imperialism.

Neo-imperialism indeed has been defined as "the geopolitical practice of using capitalism, business globalization, and cultural imperialism to influence a country."

As part of the neo-imperialism theory is the idea of "cultural colonialism/imperialism", which in short is the desire of the stronger nations to try to control the values and perceptions of other nations. This is done through the media (print and broadcast), language, religion and education. The driving force is, of course, economic.

Turkey has seen how this works through the media. Just recently, with the strikes in Paris, the double standards of the print media have once again been brought to the fore. When there is unrest in Istanbul, it is "worrying;" i.e. there are worries that the government is being too heavy-handed with the citizens. There are worries that the country is in danger of becoming a dictatorship. However, when there is unrest in Paris or any other European / American city, repressing it with full physical force is a matter of national security.

When the LGBT community in Istanbul were denied permission to hold a parade earlier this month the number of articles that talked of "rights" being violated, of "unfair persecution" of the LGBT community - articles which were for the most part in English - was incredible. The fact that this controversy did not appear with the same fervor in the Turkish language press was not due to oppression of the media. It was rather due to the fact that most Turks understood why permission was not given. Turkey is a country under threat from DAESH and PKK. A LGBT- Pride Parade during Ramadan in Istanbul would be tantamount to waving a red flag at DAESH.

Imagine the headlines if such a parade were to be allowed to go ahead, only to be targeted by terrorists. Who would be blamed in such a scenario is obvious. Indeed, there seems to be only one person to blame in Turkey these days - at least in the Western media.

The globalization of language is obvious. English. Everyone must speak English. Hey, I am all for that. It makes my life much easier. English is a means of international communication. However, it should not be allowed to become more important than the local language. Languages are inherently carriers of culture and tradition, and as such should be allowed to thrive.

In fact, this is what we should take from globalization. We should preserve what differences remain, celebrate them, and enjoy our unique natures.

As long as people could travel there has been a mixing of cultures. People have moved from land to land. From nation to nation. As they travel they bring things with them. We need only remember Marco Polo who brought pasta from China. The spices and silk that came via the Silk Road. The lands "discovered" when searching for easier routes to transport such essential items.

If it hadn't been for Sir Walter Raleigh not only would Europe never have encountered tobacco, but also potatoes. The Spanish introduced the tomato in the sixteenth century. Tea came from China (obviously) and coffee from the Arab world.

To envisage a time when we have eliminated the differences is harking back to a melting pot idea. If we celebrate the differences, we create a world full of sound and color, a world that challenges the senses. Such a world is more than a mosaic - it is a kaleidoscope.

Globalization is a trend that has been continuing for centuries. It will continue. But the differences will remain, and it is these we must celebrate. The cultural norms which vary from land to land is what makes us rich and interesting.