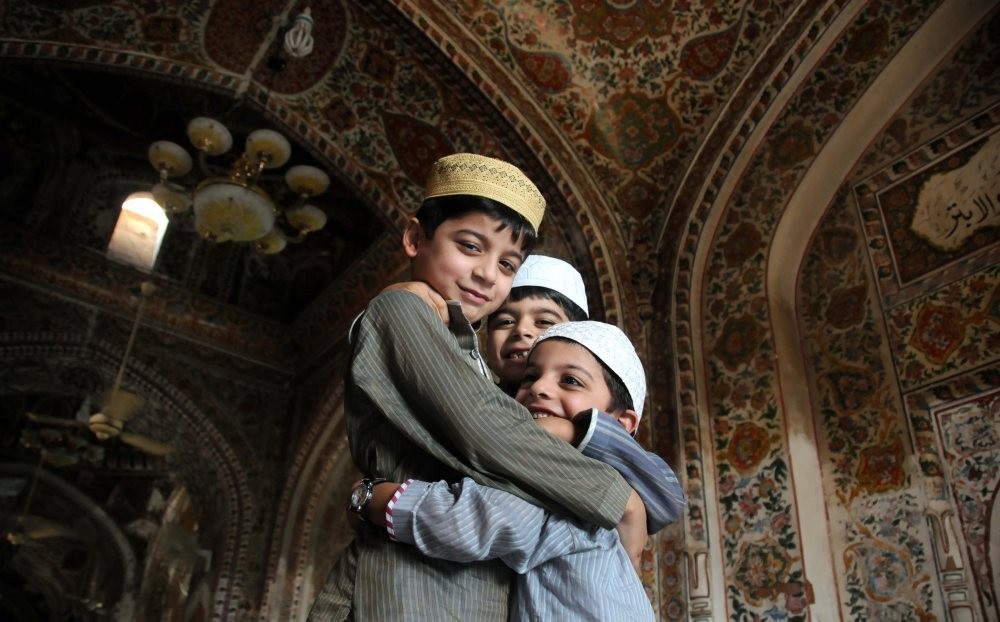 Children greet each other after offering bayram prayers at a mosque.
by Ekrem Buğra Ekinci Jul 01, 2016 12:00 am

Next week from July 5 to July 7, Muslims around the world will celebrate Ramadan Bayram (Eid al-Fitr), a three-day holiday marking the end of fasting. Bayram traditions have diversified from the early days of Islam, but for all, it is a time of joy and enjoy festivities

Just as every religion has its religious festivals, Islam has two festivals observed every year. The first one begins right after the holy month of Ramadan, a period in which Muslims fast for an entire month. This festival is called Eid al-Fitr (Ramadan Bayram), or Ramazan or Şeker Bayramı in Turkish, and lasts three days. The word "fitr" means breaking fast. The second Islamic festival is Eid al-Adha, known as Kurban Bayramı in Turkish, during which Muslims sacrifice an animal. Kurban Bayramı begins 70 days after Ramazan Bayramı and lasts for four days. The Islamic pilgrimage is also practiced during Kurban Bayramı.

The people in Medina used to celebrate two festivals during the time of Hegira. The Prophet Muhammad once said: "God changed these two festivals of yours with two other festivals which are more propitious: These festivals are Eid al-Fitr and Eid al-Adha." He also banned celebrating the festivals of other religions.

The days and nights of these holidays are the times when people are rewarded for their good deeds and it is advised that people spend these days with joy. Fasting is prohibited during these holidays. In Arabic, "eid" is derived from the word "Awdeh" which means "to return." This phrase is used because the holidays are celebrated every year in a loop. The Turkish word "bayram" is derived from an ancient Sogdian word "patram" or "pedram," which means "recurrent entertainment."

There is a particular prayer performed after sunrise during both holidays. This prayer is performed with a congregation in large places in cities or towns called "namazgah" (prayer place), which are assigned for general prayer, or in the city's biggest mosque. People who do not normally perform prayers often attend this prayer and bring their children with them. Women prepare breakfast at home while men are at the mosque.

Since it is believed that performing this prayer is equivalent to good deeds and every step that is taken to get to the mosque is equivalent to good merits, people take the long route to the mosque and take the shorter route after the prayer to join their families as soon as possible. On the way, people chant the takbir with one voice: "Allahu akbar Allahu akbar. La ilahe illallahu. Vallahu akbar Allahu akbar ve lillahil hamd" (Allah is the greatest. Allah is the greatest. There is no other divinity but Allah who is the greatest and the one and all praises go to Allah). It is advised to take a shower, wear nice clothes and perfume and carry out hair and beard care on these holidays. Muhammad used to consume something sweet before bayram prayers. This action symbolizes the end of the fasting month and enjoying the day without fasting. Islam considers and even encourages having fun and being cheerful in a religiously proper way. Muslims should reflect on their happiness and joy on Eid al-Fitr days. Hadith scholars Bukhari and Muslim narrated a story that took place when Aisha, one of Muhammad's wives, was a little girl: "On an eid day, people of Habesh came to the mosque's yard and played a game with spears."

During these holidays, people play games, participate in competitions and listen to music in a religiously appropriate way. The people of Medina, like people everywhere, loved entertainment and used to celebrate holidays with joy. The same narration continues: "On an eid day, Abu Bakr went to visit his daughter Aisha and found her listening to two little girls who were playing tambourine and singing. When he reproached them, Muhammad said: 'Let them be Abu Bakr, these are the eid days!'"

On bayram days, people call on friends and both the living and dead are visited, and the poor and needy are looked after. Giving a helping hand to those who are in distress due to illness, poverty or similar problems is a religious obligation on bayram days. Hence, wealthy people should offer money or food to the poor for them to eat fully for a day according to the number of their family members before the prayers on Eid al-Fitr, preventing the poor from starving, at least on this holiday.

Muhammad once saw children playing outside on bayram. One of the children was standing aside and watching the other children playing unhappily. He approached to the child and learned that he was an orphan. The parents of the other children were alive and they had bought their children fine clothes and fed them nice meals. He caressed the child's head and asked: "Do you want me to be your father, my daughter Fatma to be your mother and my grandchildren Hassan and Hussain to be your siblings?" He took the child under his protection and dressed and fed him. He asked Muslims to make children happy, especially on bayram days. Therefore, adults do everything they can to make children have good memories of bayram days.

Bayram days at the Imperial Palace

Holidays were also a means to display the glory of the empire and the Ottoman sultans apart from their religious duties, since authority and glory in monarchies are displayed not only through military accomplishments, but also through ceremonies. So, bayram ceremonies were arranged according to Sultan Mehmed II's Code of Laws.

The interior of the palace was decorated with torches and lanterns, which were hung on all the windows on bayram days. After the sultan observed his morning prayers at the Aghas Mosque within the Topkapı Palace complex, he exchanged holiday wishes with his retinue in the room where holy relics belonging to Muhammad are preserved. After this ceremony, the sultan congratulated the bayram of high officials in the Arz Odası, where sultans officially welcomed guests. In this room, the sultan sat on the throne and officials appeared before him in their uniforms according to their rank and exchanged holiday wishes. A personal official stood and held a part of the velvet cover of the throne, which was ornamented with silver threads. Those who appeared in front of the sultan kissed this velvet cloak and congratulated his bayram. If the person who appeared in front of the sultan was a scholar, the sultan used to stand up out of respect. The mehter, or janissary band, performed as long as the official ceremonies continued and ships anchored at the entrance to the Bosporus fired cannons. The sultan would appear on an adorned horse with his holiday regiment and observe his bayram prayer at a nearby mosque with the company of officials. Holidays were the time when the public could see the sultan much closer. Special officials standing side-by-side while the sultan passed used to shout: "Long live the sultan! Do not be aggrieved, Allah is more gracious than you."

Because the time between the morning prayer and the bayram prayer is short and many things must be done, holiday wishes were postponed after the bayram prayer. After this, the sultan ate breakfast and rested in his room and then saw his family members and harem.

Following official celebrations at the palace, officials expressed their good wishes and visited each other, according to their hierarchy. In the 19th century, Sultan Abdulmecid urged the cancelation of these visits, as they were expensive, and called to observe them only at the principal clerk's house. On the other side, small fireworks were set off and the holiday regiment appeared on the street for the public. Young people studying at the palace academy performed and showed their skills with swords, arrows and rifles. There were also wrestling competitions.

Many foreign travelers mentioned bayram celebrations in their travel accounts describing how magnificent the festivals in the Ottoman Empire were, especially in Istanbul.
Last Update: Jul 05, 2016 12:50 am
RELATED TOPICS