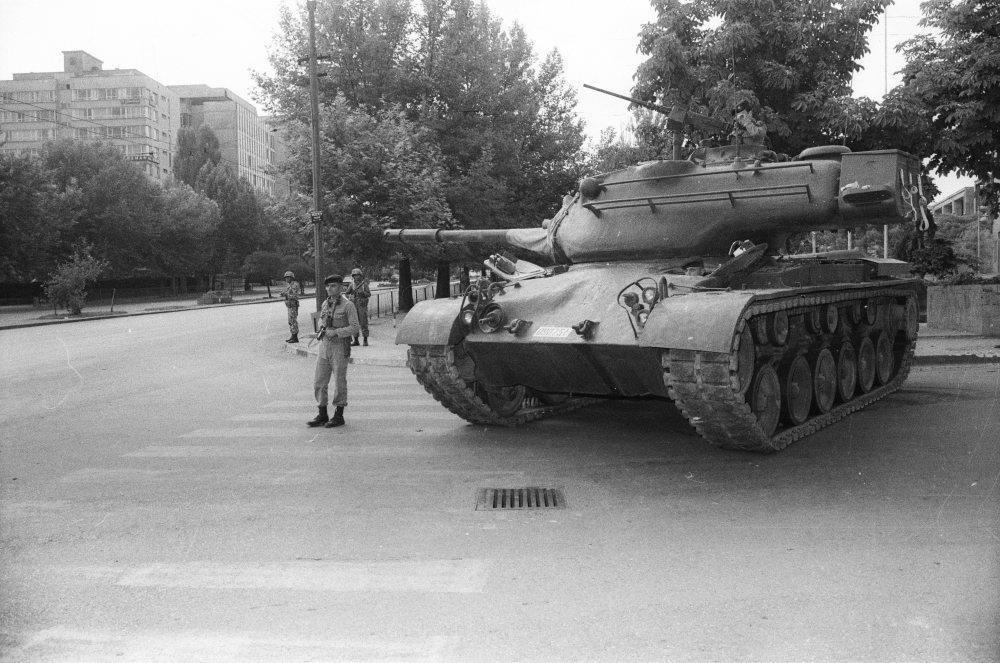 The coup orchestrated by the right-wing junta under Gen. Kenan Evren hit Turkey on Sept. 12, 1980, causing unrest accompanied by a flow of arrests, torture, extrajudicial killing and political and social crackdown

Toward the end of the Cold War, the U.S. was trying to reinforce its dominance in the Middle East and Asia while carrying out the European Green Belt initiative against the Soviet Union. The Americans supported the mujahedeen guerrilla fighters in Afghanistan that were fighting against the Soviets and turned a blind eye to religious regimes taking root in Pakistan and Iran. Under this political climate, a military coup took place in Turkey on Sept. 12, 1980.

The political, economic and social atmosphere in Turkey was highly problematic before the coup. The troops that were sent to Cyprus by the anti-American coalition, a government formed by late Prime Minister Bülent Ecevit and Deputy Prime Minister Necmettin Erbakan in 1974 and keeping the troops there even though peace was ensured, caused international reactions targeting Turkey. Many countries imposed heavy economic sanctions on Turkey. Devaluation hit the economy and inflation surpassed 100 percent. Essential supplies such as petroleum, natural gas, oil and cigarettes were scarcely found. 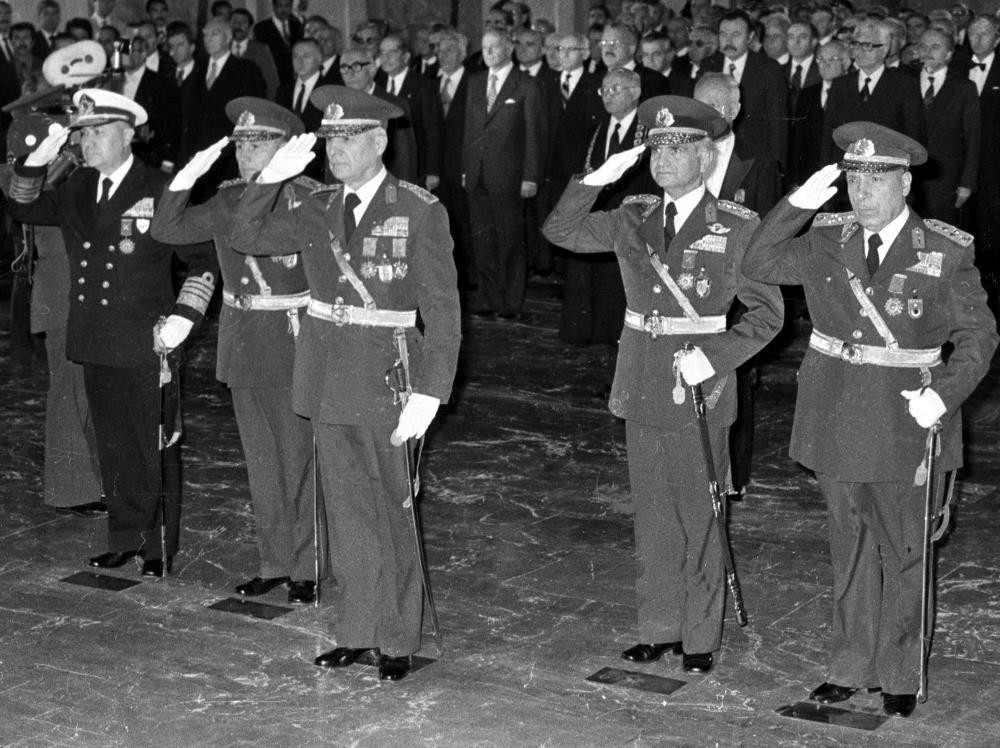 The leaders of the Sept. 12 military coup, from left to right, Adm. Nejat Tumer, Gen. Nurettin Ersin, Gen. Kenan Evren, Gen. Tahsin Şahinkaya and Gen. Sedat Celasun at a ceremony at the Atatürk mausoleum in Ankara.

The country was also undergoing serious ideological polarization. The criminals who came out of prison with the amnesty issued in 1974 had been involved in terrorist activities. The left-wing groups that supported Turkey's integration with the Soviet Union and far-right nationalist groups that dedicated themselves to avoid such integrations engaged in armed conflicts with each other through their militia forces. University and high school students, trade unions, government offices and even the streets were divided into fractions. Even though martial law was declared, nothing had changed and tens of people continued to die on the streets every day.

The country was governed by coalition governments. Four political parties, including center right, center left, nationalist and Islamist had a right in the command of the country. Just then, a political crisis came about. A new president, instead of the one whose term of office was over, could not be elected. The election rounds continued for months, but the political parties were not able to reach an agreement. All these led to a coup that took place at 3 a.m. on Sept. 12, 1980. Tanks were positioned at predesignated locations. The soldiers that left their barracks took over all crucial positions and a curfew was declared. Parliament and the government were abolished and politicians were arrested and sent into exile. The junta appointed soldiers, who were either on active duty or retired, to all democratic administrations. Critical institutions such as the police, the Turkish Radio and Television Corporation (TRT) and Turkey's Post Office (PTT) were taken over by the military authorities. Retired Admiral Bülent Ulusu became the military regime prime minister.

The putschists were propagating their will with official statements one after another. Then, Chief of General Staff Gen. Kenan Evren made his famous speech on TV during which he recounted the reasons behind the coup. The military had been considering a coup since 1978 and established a committee to that end. They even sent a warning letter to the government on Dec. 27, 1979. What made the 1980 coup different from the coup on May 27, 1960 was that it came as a result of the chain of command instead of from a small group of officers. According to Evren, the legal excuse behind the coup, whose code name was "Bayrak Harekatı" (Flag Operation), was an article in the military's internal service act considering the military's duty to "protect the Republic."

The people of Turkey, who had grown accustomed to coups, welcomed it with serenity because the conditions were set. However, when the dust settled after the coup, certain questions came to mind. Why could the terror on the streets not be stopped even though politicians and soldiers did everything the soldiers ordered during two years of martial law? And, of course, was a coup necessary?

The country was governed by the National Security Council (MGK), composed of five high-ranking generals. Hundreds of thousands of people were taken into custody and they were trailed. Fifty people were sentenced to death. Evren's famous question: "Should we keep them fed instead of hanging?" entered into Turkish political literature. People were oppressed by means of a fear operation. Many died in prison under suspicious conditions. Hundreds of thousands of people had international travel bans imposed on them and 30,000 people fled abroad as political refugees despite all measures. Around 14,000 people had their citizenships revoked, thousands were dismissed from civil service and films, books, newspapers and magazines were censored and all social community groups were closed. Unlike the coup on May 27, 1960, not only left-wing politicians and the government, but all political parties and politicians were denied action and judicial proceedings included ordinary people. The country's economic loss caused by the coup is estimated to be around $50.4 billion.

The junta, who always put emphasis on Kemalism, introduced the official ideology known as Turkish-Islamic Synthesis, which they considered to be a safety plug to prevent Turkey from shifting to the leftist bloc. This also reveals another difference between the 1980 coup from the 1960 coup, which was more social-democrat in the core.

Upon struggling with the hardships of governing a state, especially the economy, juntas usually withdraw from the stage and leave politics to civilians. It was the same in this case as well. The junta allowed re-founding of political parties. Technocrat Turgut Özal's Motherland Party (ANAP) was victorious over the party promoted by the junta in the general elections held the following year. Özal worked to establish a liberal democracy and economy in Turkey as much as possible under the shadow of the coup and the soldiers. What makes the Sept. 12 coup different from the coups that occur in the third-world countries is the effort to bring democracy back, even if it is guided by the military, and work things out in the legal platform even if everything the putschists say stand for law. People suspected foreign powers behind the Sept. 12 coup. Fingers were pointed at the U.S. mostly because the former CIA station chief in Turkey, Paul B. Henze, was rumored to have said: "Our boys have done it," to then U.S. President Jimmy Carter while watching the film "Fiddler on the Roof." Rumor has it that then Turkish Air Force Commander Gen. Ali Tahsin Şahinkaya went to the U.S. to get permission or directives for the coup some time before it took place.

The coup was a product of establishing a liberal regime that is also nationalist and conservative in Turkey within the European Green Belt initiative. In the 1970s, when liberalism made its peak, it was commonly known that the U.S. supported coups and brought right-wing governments to realize these reforms. In other words, the 1980 coup was orchestrated to easily bring in the government decisions dated Jan. 24, 1980, aiming to transform the Turkish economy in a neoliberal sense and open it to the world. Interestingly enough, Özal, the mastermind behind these decisions and the Prime Ministry undersecretary as the time, became the prime minister and then the president. He worked in harmony with the U.S. for 10 years.

In 2011, a constitutional provision protecting the 1980 coup plotters was canceled and two generals - Evren and Şahinkaya - were given life sentences in 2014. However, the system that they created with the 1982 Constitution still rules Turkey in political, economic and social aspects.
RELATED TOPICS