What democracy rallies tell the world 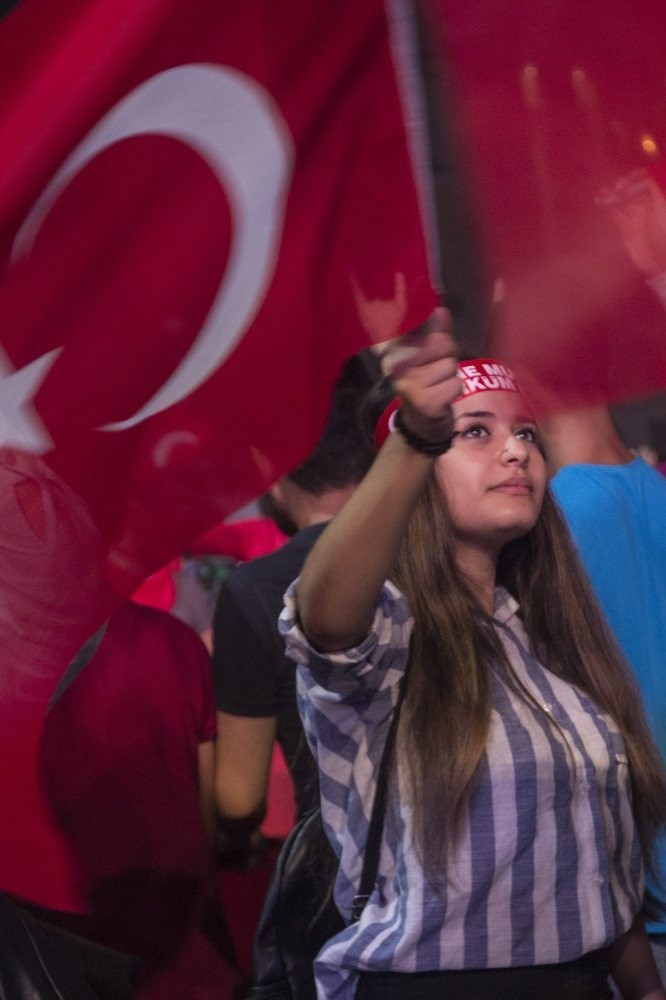 The world saw a grand democracy rally last Sunday that witnessed the birth of New Turkey. With the participation of political and military figures as well as a massive number of the public, the rally denounced the failed coup attempt and showed how the Turkish people continue to ensure togetherness and solidarity no matter what they endure

Nothing will ever be the same again. We are now living in New Turkey. A Turkey where a coup has been defeated, denied by the people. Where people have taken up the cause of democracy and freedom, some paying for it with their lives.

Last Sunday was a continuation of Turkey's evolution into a fully-fledged modern democracy. After the people, the police and the government had seen off a botched coup attempt, Sunday was a day for the people of Turkey to come together and affirm that this would now indeed be a new Turkey.

This was not the first time the people had come together. The Turkish people had taken to the streets on July 15, and by Sunday, Aug. 7, they had yet to return home. Keeping vigil all night in every city throughout the country, in every region of every city, the Turkish people had demonstrated that this Turkey was different from that which had come before. People pitched tents in parks and sat up all night drinking tea and sharing their food and stories with their new neighbors. Cheek by jowl, modern hipsters sat with conservative aunties, pretty young things chatted with elderly bearded, baggy-trousered men. 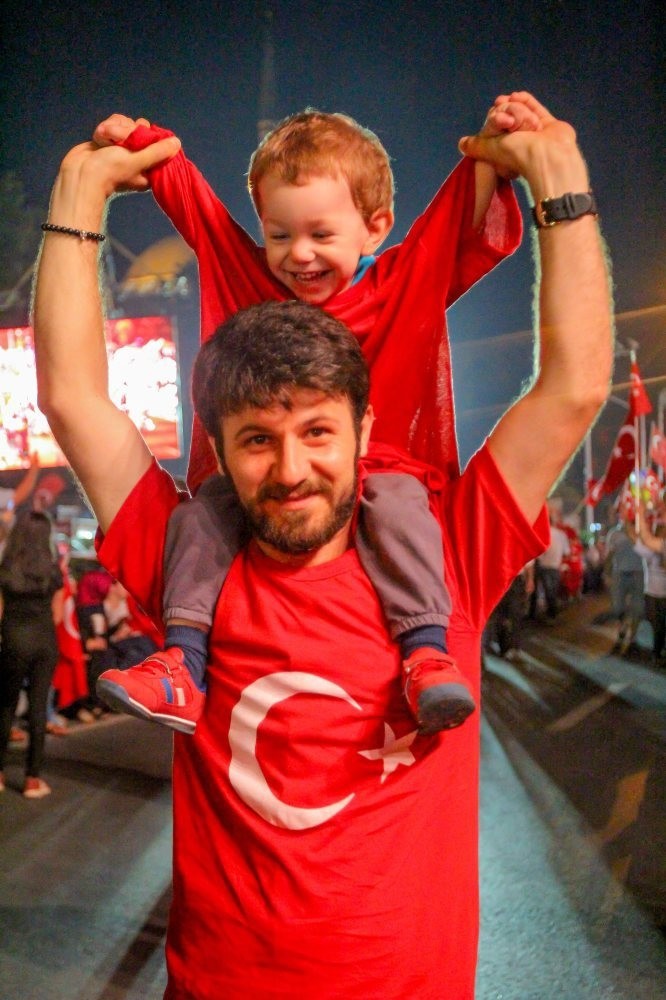 As a reflection of this new tolerance, this new togetherness, on Sunday the leaders of all three political parties attended a democracy rally. It is reported that over 5 million people attended. More would have attended, but the arena was overflowing by 2 p.m. The president, the prime minister, the leaders of the opposition and the chief of the military stood together, smiling and waving. All gave speeches; but there was no party politics here. Every one gave messages of solidarity; they were healing and reviving messages.

For the first time the leader of the Turkish military stood in front of the Turkish people, promising obedience to them with every gesture and word. How significant in a country where military leaders had only made public speeches to announce that they had taken over the country.

Sunday was the culmination of this transformation. Now it is up to the people of Turkey to ensure that this togetherness, this solidarity, this unity continues.

A great task falls to the media, print and broadcast. It was with dismay that I saw someone tweeting a photograph from a Turkish newspaper; the title of the photo was "The New Turkey". In the picture were two ladies in pink; one wearing hijab, one sans hijab.

I immediately tweeted "How 90s of you." Hijabi/non-hijabi coming together is not the New Turkey. This has been the Turkey since the post-modern coup of 28 February, 1997. The only problem is that some institutions are only able to focus on this fact now.

I see your eyebrows raised quizzically. Surely Turkey is a polarized society, a society at odds with itself? Well, yes, there is/was polarization between institutions, intellectuals, media outlets and politicians.

But among the "people," at the grass roots level, in general there was very limited polarization. Hijabi, non-hijabi - after '97 this was passe. Why you ask? What happened to change this?

28 February happened. Overnight hijabi girls were told to choose between education and their hijab. To choose between their aspirations and their religious beliefs. Between the way they wanted to represent themselves and their future. What happened is that some devoutly religious girls chose to remove their hijab; this was not an easy choice. For many it was deeply traumatic. Indeed, many only managed a month or two before abandoning education. Other girls directly dropped out. Still others, oddly enough, girls who had not been wearing the hijab, donned the hijab in a move of solidarity.

Suddenly, the '97 coup achieved something it had never intended to. It blurred the lines between the secular and the religious; the hijab was now a political symbol.

The final nail in the coffin to this divide was delivered during Justice and Development Party (AK Party) administration. By 2010 girls were able to attend university with or without the headscarf. Girls in miniskirts sat next to girls in flowing hijab. The hijabi had become a non-hijabi. The non-hijabi had become a hijabi. Assumptions could no longer be made.

Nearly 20 years on and journalists are only noticing now? How odd. Not really. Some journalists have merely ignored this phenomenon because it has suited them. Since 2012 certain newspapers have focused on drumming up polarization. The "us and them" theme has been overt. There have been the commentators who, after the local elections of 2014, stated "They have won. We have lost". There have been those who have tried hard to separate the so-called "lack of logic" they see in AK Party supporters voting habits and the impeccable logic in the voting habits of others. Such journalists try to tie this "lack of logic" to the fact that a large percentage of AK Party supporters either wear the hijab or are married to women who wear the hijab.

But now it is time that the hijab/non-hijab "thing" stops being a "thing." It is time to get past it.

There is another photo making the rounds on twitter. A woman in a black burqa is waving a Turkish flag with a picture of Atatürk on it. This is more astounding. But this should not be shocking either. Not for people who really understand Turkish society

The magazine Foreign Policy, astoundingly, published a totally irresponsible and inaccurate article last week in which the author stated that hijabi women did not support Ataturk, while non-hijabi supported him and the secularism he brought. It is impossible to make such a simplistic statement in a complicated country like Turkey. As we can see above, it is impossible to make generalizations about people's beliefs or principles according to what they wear.

And then Michael Rubin (https://www.aei.org/publication/will-erdogan-close-ataturks-mausoleum/) demonstrated once again how little he understands Turkish society - and indeed how little he cares about trying to understand it.

Michael Rubin first predicted a few months ago that Turkey would have a coup. How interesting to reread that article to

day. That article shows how little Rubin really knows Turkey. He was convinced that President Recep Tayyip Erdoğan would be arrested, tried and sentenced to death. Little did he foresee that the Turkish people would stand up for their president. Even those people who are not fond of Erdoğan stood up for him, saying "He is our president. If we want to get rid of him, we will do it through the ballot box, not with the military."

Commentators like Rubin do more harm than good. They convince their readers that they know what is going on in Turkey, that they understand the Turkish psyche. And then they come up with ridiculous theories. Perhaps someone, somewhere believed Rubin when he wrote that Erdoğan, his son

and son-in-law would all be executed in the coup that he predicted. Perhaps they took him at his word. If so, they were sorely deceived.

In this week's article Rubin's new thesis is that Erdoğan will close down Atatürk's mausoleum because Erdoğan hates his predecessor and wants to eclipse him. Rubin bases this theory on a quote Erdoğan made in the 1990s, when mayor of Istanbul. First of all, to base a "cutting edge" piece on a quote that is 20 years old is a bit of a stretch. Secondly, Rubin obviously has some trouble with Turkish, as the quote has been inaccurately translated. The original reads: "Ata'ya saygı duruşunda sap gibi ayakta durmaya gerek yok." This has been translated as: "One ought not to stand [in respect, stiff] like a straw on Atatürk's commemoration events." But a real translation would be: "There is no need to stand stiff when paying respect to the forefather." (Erdoğan calls Atatürk "Ata," a term of respect mixed with affection that the Turkish people use for this first leader of the country.) What Erdoğan is saying is that instead of stopping in the middle of the street on Nov. 10, at 9:05 a.m., (the day and time of Atatürk's death, when all Turks must drop what they are doing and stand to attention) there must be a more logical way to show our respect. And you know what? He isn't wrong.

I think it would be safe to say that there are no Turks (or very few) who would say that they dislike Atatürk. He is the founding father of the country. He did lead the nation through a war of independence and helped to establish it as a sovereign nation. There are many who might disagree with the way he tried to modernize Turkey, particularly laws regarding clothing and language. But on the whole, the Turkish people are quite fond of Atatürk.

The problem that many Turks have with Atatürk is not with the man himself. It is rather with his name or image being used to support every form of oppression, be it from oppression of dress, ethics, belief or education. It is time that Atatürk's image no longer be trundled out every time a certain sector of society wants to oppress people. Atatürk was an important historical figure, and he will always play a central role in Turkish history and have a place of honor in the Turkish nation.

The new Turkey is here to stay. There is still some way to go. But the nation has come together to solve its problems. The media should play a positive role in this. Perhaps the Western media should start listening to the Turkish people (using good and accurate translations) rather than self-proclaimed so-called experts. The Turkish people are more than willing to talk if you ask. Even the shepherd in the mountain has a strong and convincing argument to support his politics.
RELATED TOPICS