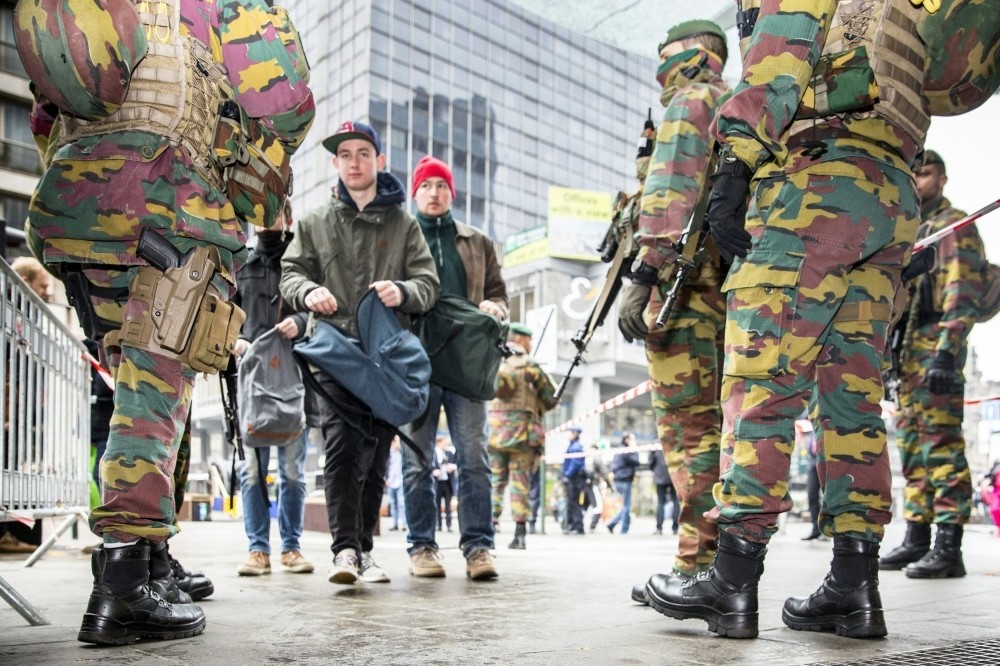 Moves in Brussels to ‘gold plate' existing anti-terror rules and even form an EU intelligence agency have met with a mixed response, as the recent Nice terror attack appears to have been a catalyst for change, while British MEPs remain sceptical

A leading British defense expert has spoken out against a bold new anti-terror plan being drawn up in Brussels, saying that it will probably not deter terrorist attacks like Nice, Daily Sabah can reveal.

In the wake of the Brussels attacks, the European Union began planning a radical overhaul of how EU governments go about cracking down on terrorists, with a strong momentum in Europe to harmonize intelligence operations and share data.

The drastic move is expected to gain momentum in Brussels following both the U.K.'s so called "Brexit vote" and the tragic terror attack in Nice that claimed 82 lives which is beginning to stir international concern over safety within the European continent.

In America, Newt Gingrich called for more Muslims there to be deported, while on fighting terror he said simply: "We better rethink the rules, or we are going to lose the war."

The radical EU anti-terror proposal also comes after recent reports that two of the Paris bombers in November of last year were arrested when they entered Europe for having fake Syrian passports - but were later released and allowed to travel to Paris to carry out the terror attacks.

A blueprint which was first introduced following the Paris attacks is now being fast-tracked through the EU decision making process, which is feared would allow police in Europe to arrest those who have assisted terrorists in any part of their practice, including even helping them with money to travel to Syria.

A draft directive was approved by the MEPs in a committee meeting in July and is now about to be backed by a vote in Strasbourg.

The grandiose EU plan is doomed though and will not have any real impact on future planned attacks by DAESH, leaving the European continent a dangerous place for tourist to holiday in, according to a senior defense analyst at IHS Jane's Terrorism & Insurgency Centre.

"Any EU efforts to integrate intelligence capabilities, particularly with regard to monitoring electronic communications and travel records, will face significant obstacles due for example to concerns over privacy safeguards related to the mass collection of data," explained Otso Iho, senior analyst at IHS Jane's Terrorism & Insurgency Centre.

"National intelligence agencies may also be reluctant to fully engage in intelligence sharing due to issues such as ensuring source protection, which may limit the effectiveness of intelligence-sharing platforms like the European Counter Terrorism Centre, despite new legislation" he told Daily Sabah.

The move though is a controversial one and comes at a time where a leading MEP in the European parliament is calling for the creation of an EU intelligence agency and some Eastern European countries are proposing that an EU army is set up to man borders against refugees.

Critics of the plan target senior EU figures in the Belgian capital for failing to do their jobs.

The U.K. Independence Party's (UKIP) defense and security spokesman Mike Hookem said the EU was "rushing through badly planned legislation in order for it to look like it is handling the terror attacks" and has lashed out at the EU foreign policy chief, Federica Mogherini - a former Italian foreign minister who comes under fire for trying to wrangle more foreign policy powers for the EU for her multibillion euro office in Brussels.

"We have seen this already with the firearms legislation following the attacks in Paris where EU bureaucrats are trying to kid themselves they can stop these attacks caused by the free movement of terrorists and AK47s by putting strict rules on antique weapons and museums."

Mr Hookem, also makes the point about Europe's "open boarders" which may have played a role in the Nice attacks carried out by a dual nationality French Tunisian.

"We can see from this report that Eurocrats and MEPs realize there is a 'home grown' element to extremism and also that these terrorists have used open borders to make their home in EU countries. Open borders have made it easy for terrorists to cross borders so we need to control this by imposing controls again."

"But what we see instead is this desire for a single EU army and counter terrorism service which will put us at greater risk," adds the UKIP MEP. Yet Hookem, a former soldier, does not have the support of British Conservative MEPs in the European Parliament who appear to agree with the thrust of the paper. A leading security expert and a former Brigadier, Geoffrey Van Orden MBE has always opposed previous proposals for an EU army, believes that much of the anti-terror paper is sound. The Conservative MEP, who is proposing amendments to the draft, such as "heightened steps to deal with terrorist use of radiological or biological materials" along with "inclusion of measures against those using our countries as safe havens while promoting terrorism in other countries" citing the example of

The Liberation Tigers of Tamil Eelam (LTTE) supporters in London that financed and supported terrorism in Sri Lanka over so many years. Hookem is not convinced.

"The foreign policy of the EU is headed by a woman who cries as a response to a terror attack instead of thinking what actions can be taken to deal with the problems, the last things we need is EU law which is counterproductive at the best of times," he added.

Yet the EU plans may well have prevented the Brussels attacks themselves as at least one of the bombers travelled to Turkey and was arrested there before being sent back to Belgium - where he was released as there were no legal pretexts to hold him.

"The existing rules need to be aligned taking into account the changing terrorist threat Europe is facing. This includes adequate criminal law provisions addressing the foreign terrorist fighter phenomenon and risks related to the travel to third countries to engage in terrorist activities but also the increased threats from perpetrators who remain within Europe," the draft report argues.

But hidden in the small print, the proposal looks as though it will be sped through, without the normal checks. Despite the extensive new proposals, the Commission says that due to "the urgent need to improve the EU framework security in the light of recent terrorist attacks," they are "exceptionally presented without an impact assessment." The EU will update its terrorism law to meet international obligations at the same time as introducing new powers "to tackle the evolving terrorist threat in a more effective way, thereby enhancing the security of the EU and the safety of its citizens."

One aim of the European Commission's aims is to meet requirements stemming from the U.N. so that the "draft Directive also proposes to criminalize the following behaviors: Attempt of recruitment and training, travel abroad with the purpose of participating in the activities of a terrorist group, and the financing of the various terrorist offences defined in the draft Directive." The term "gold plating" has been used in the U.K. to describe the process of giving EU rules "extra strength" when transposing them into national law; it could equally be applied to the Commission's proposal to tack further powers onto a law implementing international obligations.

The draft report, which MEPs will vote on soon comes immediately following the Brussels attacks and recent calls from the leader of socialists MEPs in Brussels for the creation of a new EU intelligence agency.

Gianni Pitella MEP, leader of the socialist group in the European Parliament, called for a "European Intelligence Agency" to be set up to strengthen the EU's defenses against extremists.

Speaking to an EU website, funded by EU money, he said: "Paradoxically, the terrorism threat and the migration crisis could turn out to be an opportunity to finally turn Europe into a fully political Union. "The sooner we realize that we all need greater European integration, the better we will be able to protect citizens' security and freedom," said the politician, whose Progressive Alliance of Socialists and Democrats is the second biggest political grouping in the European Parliament.

"In front of tragedies such as those that took place in Paris and Brussels, European leaders should put aside their national selfishness and be ready to think and act differently."

Mr Pitella said that EU leaders "must deliver a European Intelligence Agency" to improve cooperation between European spy networks in the fight against extremism. And he argued that closer ties across the EU was the "only answer" to the growing security threat.
RELATED TOPICS