The social divide behind the Syrian War 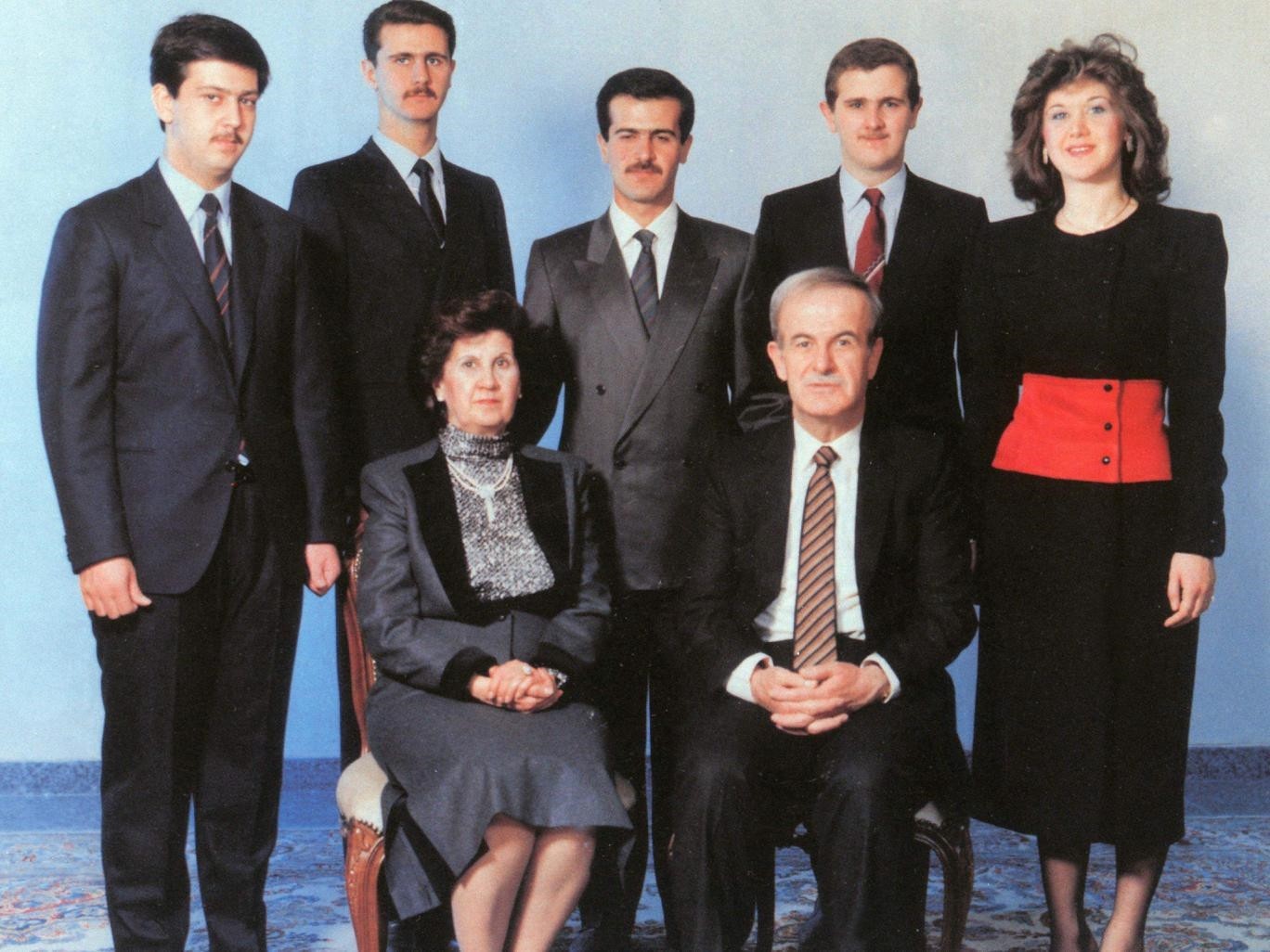 The Assad family. Hafez Assad and his wife Anisa Makhlouf. On the back row, from left to right: Maher, Bashar, Basil, Majid, and Bushra Assad.
by Ekrem Buğra Ekinci Sep 09, 2016 12:00 am

The Alawites, also called Nusayri is a Shiite offshoot, makes up around 10 percent of Syria's population. The Assad family ruling Syria for years comes from the Alawite background. The ongoing war that has turned Syria into a firestorm also has a religious side accompanied by sectarian cleansing

When the uprisings in Syria started, many viewed them as a movement for democracy. If examined in depth, however, it becomes evident that the resulting war is a struggle between Nusayris, who have been in power for more than 50 years, and Sunnis, a disenfranchised majority.

Syria's demography is not as homogenous as Tunisia, Egypt or Libya. The main building block of the ruling regime is the Nusayri religious group, who are supported by Iran. If the regime is toppled, it would not just mean the end of the Assad family but also the downfall of a crowded ethnic group.

The Nusayri can be described as "Arab-origin Shiites" and make up 10 percent of the population. According to the chronicles of Islamic history, they are a Shiite sect that believe Allah appeared in the fourth Caliph Ali and his lineage and that their leader, Ibn al-Nusayr of Kufa and died in 883, was also considered as a prophet. Even though they respect the Quran, they believe that it has a hidden meaning only they can decipher. Their beliefs and worship have been shaped according to their traditions.

Their religious principals are based on a 16-part book called "Majmu" written by Hasibi, who became the leader of the sect in 900 and was deemed the second founder. These principles differ greatly from the religious principles of the Sunnis and Shiites in Iran. Nusayrism was born in Basra but is mostly followed in western Syria. Its adherents have lived away from their Sunni neighbors, trying not to be noticed in Latakia, Jibal al-Nusayriyah, Antakya, Adana, Mersin and north Lebanon.According to a story, which they deny, they helped the Crusaders progressing to Jerusalem against the Muslims in the 12th century. For this reason, it is told that they had a bad reputation among their neighbors. Ibn Taymiyyah from Aleppo, who lived in the eighth century and is known for his marginal ideas, described the Nusayri community as more dangerous than the Mongols and the crusaders. Following the Crusades, they became completely isolated as a community and suffered extreme poverty.

When Syria was conquered by the Ottoman Empire in the 16th century, an autonomy under the presidency of local Sheiks was granted to the Nusayris. In 1839, as they were considered Muslims, this autonomy was cancelled and they revolted when obligatory military service was imposed.

During the reign of Sultan Abdülhamid II, an agreement was made and he restored the group's loyalty. Steps were taken to merge the Nusayris with the Sunnis and mosques were built in the region; yet, these were all short-lived policies.

When the Ottoman armies withdrew in 1918, Syria was conquered by a new imperialist power, France, which formed a mandate government in 1920. The country was divided into five different states based on ethnicity and religion: 1-Aleppo, 2-Damascus, 3-Lebanon, 4- the Druze and the 5-The Alawite Territory. The British and French colonialist policies of divide and rule are best known for raising minorities against the majority.The Druzes are a Shiite sect living in Lebanon and Syria. However, four of these states did not last long. When today's Syria was founded in 1946, the State of Alawite (Etat des Alaouites) was connected to it - the French were the ones that used the word "Alawite" for the Nusayris. Lebanon remained a sovereign state; a loss that is still felt in Syria.

Even though losing sovereignty might seem as a disappointment for the Alewite, a door to the government in Syria was opened to them in this new order. Nusayris, who lived away from the city centers in distance villages and rocky areas, chose to become a part of the army, the most powerful institution of the state, in order to escape poverty and social exclusion. Having a regular wage and respect in society drew many to the army in large numbers. Having three courses a day, new clothes and the ability to carry weapons were things they couldn't get hold of in the past and in the possible future.

The military school opened by the French in 1920 was a great step for poor Nusayri children even though in 1946, when the French retreated, Nusayris mostly made up the lower ranks. By 1956, about 65 percent of the soldiers in the army were Nusayri and their power and rank in the army gradually progressed until soon they surpassed various levels of the state. Today, the secret police is controlled by Nusayris. Each Sunni officer has a Nusayri assistant with authority.

A Nusayri child from Samandağ (al-Suwaydiyah), Hafez el-Assad was a pilot and a member of the Arab Socialist Ba'ath (Hizb al-Ba'ath) Party. When they gained power after the coup in 1970, he introduced Nusayris to politics. He promised Christians and Druze that he would protect them against the dominant Sunnis if they supported him. Through cooperation with the richest Sunni tradesmen, he divided the Sunnis. His son Bashar was married to a daughter of a Sunni family. The Assad family gave priority to the Nusayris within the government and other critical positions in the intelligence and security. This strategy has kept the family in power for the past 50 years.The first action that shook the authority of the family was the Muslim Brothers' uprising in 1982 in Hama and then the Hama massacre occured. The city was bombed and thousands of Sunnis were killed and many fled the country. After Hafez's elder son Basil, whom Hafez had placed in his position, died in a car accident, Bashar, an ophthalmologist in the U.K., took his place. Even though at first he has followed a liberal political lie, this was not enough for the Sunnis who had been under heavy pressure for more than half a century.

Bashar Assad has been trying to persuade Syrians to believe that this five-year ongoing conflict that has turned Syria into a firestorm is religiously based and that al-Qaida, which wants to get rid of the Nusayris, is behind it. He says if they lose power, then it will bring a massacre. It is possible that if the Assad government topples then there will be a terrifying end for Nusayris because Sunnis have faced harsh oppression for years and will likely want to take revenge. Composing only 10 percent of the population and supporting the Assad regime, Christians will also face danger. This is why a great number of Nusayris escaped to Latakia and stored armaments in the city. It could be said that they may want to form an independent state if they fail at all. It is not difficult to say that the war in Syria will continue for years, the country will be more divided both in ethnicity and religiously and the winners will fall out with each other, as once seen in Afghanistan, to share the loot. Of course, we hope this will not happen but the current scene in Syria means that that the country will not escape the possibility of this disaster for years.
RELATED TOPICS