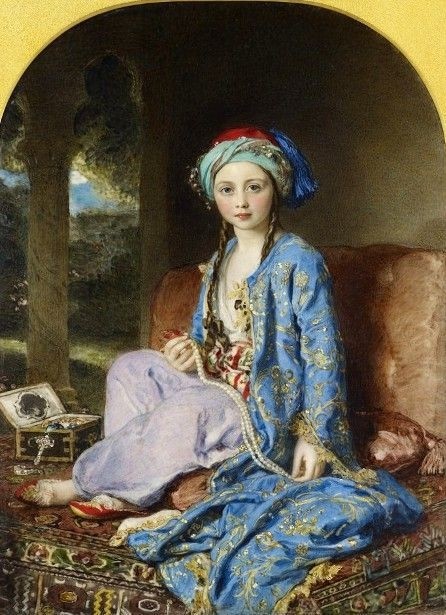 The Western world's interest in the East is not something new. Since the Crusades, the travels of warriors, merchants and pilgrims to the towns ruled by the Turks helped to maintain this interest on slow but rational grounds.

In the 14th century, the carpets weaved in Eastern Anatolia were considered luxury goods in France, the country that they were exported to and decorated the French palaces. It is enough to look at the paintings by 16th century painters such as Hans Holbein, Lorenzo Lotto, Bernardino di Betto and Sebastiano del Piombo to see how much these carpets were favored.

When the Ottoman ambassador that was sent to France in 1607 visited the Palace of Fontainebleau in southern Paris, he aroused curiosity and interest among the nobles. Even a couple of years after this visit, musicians wearing Ottoman-style clothes took the stage at a French ballet performance.

Interesting scenes also came out when King Louis XIV of France gave an audience to the Ottoman ambassador Suleiman Agha. The king spared no gaudiness to influence the ambassador. Suleiman Agha was a low ranking Ottoman official; he ironically echoed Istanbul's view of the Sun King. As a matter of fact, the ambassador was not as captivated as he was accustomed to see much more gaudiness in Istanbul. However, the noblemen began to imitate the splendor and colorful attires of the Ottoman delegation. The Turkish fashion was in high demand especially in masquerade balls. In Moliere's play "Le Bourgeois Gentilhomme," staged in 1702, the scene with Turkish celebration where actors wearing Turkish-style clothes catches people's attention.

A time came when the most well-known French artists of the 18th century envied to become a Turkish painter. It is not surprising to see that Flemish artist Jean-Baptiste van Mour (1671-1737) who spent 30 years of his life in Istanbul, depicted oriental scenes in his paintings. However, the Turkish themes in the paintings by the painters such as Parrocel, Latour, Cochin, Lancret and van Loo who had never set a foot in the East are quite interesting. These painters selected their models among the Ottoman delegation that traveled to France during the reign of Louis XV and enchanted the court as well as Parisians.

The Turks' friendship with the French goes back to the 16th century that began with the friendly relationship between Ottoman Sultan Suleiman the Magnificent and Francis I of France. However, the cultural encounters of the two countries began in the early 18th century. The Ottoman ambassador Yirmisekiz Mehmed Chaleby, who was sent to the France in 1721, during the Tulip Era, when the Ottomans reached to a high and refined aesthetic, made a splash in Paris and the Parisian newspapers featured the ambassador and his eccentric entourage for days. The king liked to see this foreigner. The ambassador's attire and his manners were quite different from the noblemen who were ever allowed to make a presence before the French king.

Ambassador Mehmed Chaleby, who was an Ottoman intellectual, was worthy of this kind reception. As he was kind to the curious Parisian ladies who flocked to the palace that were assigned for his use and showed interest in everything that he saw up close, Duchess d'Orleans said, "He is the most kind and understanding man that I have ever seen in my life." Following Mehmed Chaleby, all Ottoman ambassadors excited the Parisians equally.

The welcoming of the Ottoman ambassador to Paris in 1721 turned into a spectacle. On one side, the Ottoman delegation in their colorful and elegant clothes and on the other side ushers, guards and generals offered favorable scenes for the painters. History painter Antoine Coypel painted the ceremony of the king receiving the ambassador and presented the painting to the king's regent Philippe d'Orleans. This painting was followed by others with the same theme by other painters. They were sold at very high prices; the French nobles preferred to decorate their walls with these paintings. Parrocel, on the other hand, portrayed these noble and beautiful scenes in phases and some of his paintings are kept in the Versailles Museum. The Paris visit of the Ottoman ambassador drew so much attention that his visit not only subject to paintings but also tapestries which were modelled from the paintings.

Paris has always been taken with foreigners. To reflect their administration, they brought new fashion movements in their hair styles as well as attire. The effect of "A la Turque" fashion did not go away easily for years after the ambassador of the Ottoman Sultan returned to his home. Hence, the West's admiration for the Orient that began during the reign of Mehmed the Conqueror and known by the names of "Turquerie," "Turkomanie," and Alla Turca increasingly continued. This Orient-effect affected a large portion of social life from art to architecture, clothing to food.

Some French families in Istanbul brought traditional souvenirs when they returned to their homeland and presented these objects to the French king. On the other hand, some mesmerized the Parisians with heavy fabrics and ornamented costumes and posed for the painters. Turban became the most popular accessory in women's clothing.

The noblemen in the 18th century Europe began to dress up in Ottoman-looking clothes, hold their wedding ceremonies in the Turkish-style and keep Turkish carpets, tulips, coffee, and sherbet in their palaces and castles. Turkish themes were also in demand in various fields such as literature, painting, performance arts and decorations. Especially novels, ballets and operas featuring Turkish characters were in common.

Wearing Turkish costumes in balls and posing for the painters in Turkish clothing became a habit for the Europeans. French diplomat Harbette said: "Paris has almost become like one of Istanbul's neighborhoods," describing this period in France. The Turkish influence in Europe's social life first surfaced as dread then continued as curiosity, imitation and finally the birth of Orientalism.

The Jardin Turc ("Turkish Garden"), once Paris's most popular gardens turned out to be a favorite background for paintings. Madame de Pompadur and Madame du Barry, two famous socialites in France ordered painter Charles-Andre van Loo to depict them in Turkish-style attire in a portrait.

In music, composers inspired from Ottoman janissary band music and Oriental themes began to be heard in balls and festivities. Mozart, Haydn and Beethoven have "Alla Turca-style" compositions. Another interesting account is that during the wedding of Austrian princess Maria Josepha and Saxonia Prince Friedrich August in 1719, a large group of young people in janissary uniform and "moustache a la Turque" performed a show. The ship that brought the bride and the wedding venue was also inspired from Ottoman-style. The Ottoman-Austria wars made traditional Turkish coffee ("Türkentrank") popular in Europe, notably in Paris through war captives. Some cafes inspired from the Turkish-style made a common point of intellectuals and socialites, even became a symbol of Paris.

All in all, European architecture, design and even daily items had their share from Turquerie fashion. The Belvedere Palace's side domes looking as if they were covered by tasseled tent or the Karlskirche, which has towers reminiscent of minarets are some the examples of this trend. In 1785, a mosque built in the Scwetzinger Palace's garden is another illustration of the Western world's interest to the East.