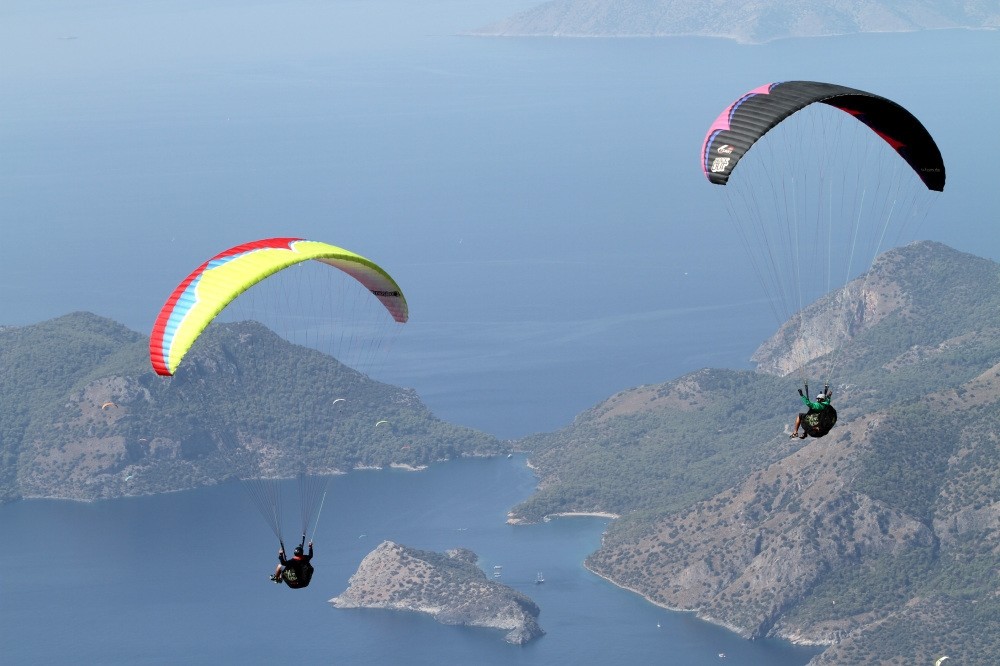 Turkey's town of Fethiye, which made its name for its calm waters, is hosting international sportsmen for an air sports festival on Mount Babadağ, the first stop for paragliding and skydiving

Surrounded by clear turquoise sea with white sands, the city of Fethiye, also called "Ölüdeniz" (meaning Dead Sea in English, referring to its calm waters) where paragliders dance in the air, is the most popular city in ancient Lycia. The Mount Babadağ (Mount Cragus), a mountain near Fethiye in southwestern Muğla province, reaches an altitude of more than 1,900 meters and will host the annual International Ölüdeniz Air Sports Festival with a main focus on paragliding.

This year's International Ölüdeniz Air Sports Festival is brewing up excitement each year with a rising number of participants. Almost 400 paragliders from over 20 countries have been invited to the ongoing, five-day sport events. Of all the participants, professional paragliders are expected to attend the festival as well, which runs until Oct. 15.

The paragliding sessions kicked off at an altitude of 1,700 meters. The participating sportsmen gave the audience quite the adrenaline rush while performing acrobatic shows in midair.

The opening ceremony included fireworks shows and consecutive paragliding performances. Fethiye Mayor Behçet Saatçi said that every year groups of people come here for paragliding with some young professionals even combining the sport with acrobatics. "It is promising to see we have paragliders from more than 20 countries here. Paragliding should be popularized well enough to attract more amateurs and youngsters into it," Saatçi added.Ekrem Çalık, the Fethiye governor, said paragliding is the main sports activity in Fethiye. "This year, over 80,000 paragliders took off from Babadağ. Here, you can participate in more than 25 sports activities. With the opening of a new telpher, it will become much easier to have access here."

In upcoming editions, the festival will be extended to the Göçek neighborhood and side-events will be held at the district center. Saatçi said that avian sports will take over Muğla in the near future.

Viewers gather on Belcekız Beach, where they can also watch skydiving and wingsuit shows, away from paragliding performances. On the last day of the festival, the SOLOTÜRK aviary demonstration team will fly over the Ölüdeniz or Çalış Beach. Throughout the event, there will be flight shows by microlights.

For participants wishing to try, tandem flights designed to carry one passenger and one pilot should be booked in advance. Tandem paragliding flights vary in duration because of the changing wind and weather conditions but generally takes up to 30 minutes. As a tandem paragliding passenger, you do not require any previous knowledge of paragliding at all. The pilot briefs you on everything you need to know shortly before the flight.

Paragliding offers a wide spectrum of pilots the opportunity to fly, in a lightweight and easy style. Ölüdeniz is famous for its unrivalled paragliding opportunities. It is seen as one of the best places in the world to paraglide for its unique panoramic views, and the Mount Babadağ's exceptional height. During a solo flight, you fly over the ridges with a bird's eye view of the white beach and the lagoon. Each flight generally takes between 25 to 45 minutes. Paragliding season starts in mid-April and ends in November, so there is still some time to try it in Fethiye. To take paragliding classes, there are a number of training centers like Skywalkers and Gravity Paragliding School.

There are not only paragliding centers in Fethiye but also several underwater sports facilities, along with diving centers. Scuba diving is a popular option in Fethiye. Your diving instructor will put you at ease, explaining how to get the most from this experience as you enjoy the wonderful marine life. The next adventure sports option is canoeing. Accompanied by our professional guide, glide silently through the waters of the Eşen Stream.

Excursion groups also offer quad bike tours in Fethiye, which is easy to handle even for beginners. You travel off road, so no special license is required. A quad Bike tour is a perfect way to explore those off beaten tracks to find private secluded havens. Alternatively, tourists can explore the countryside on horseback. You can either take up the route to the mountains of Ölüdeniz with the breathtaking views of the blue lagoon or through the ruins of a Greek village. Each tour takes roughly two hours.
RELATED TOPICS