Mummies of Anatolia still a matter of interest 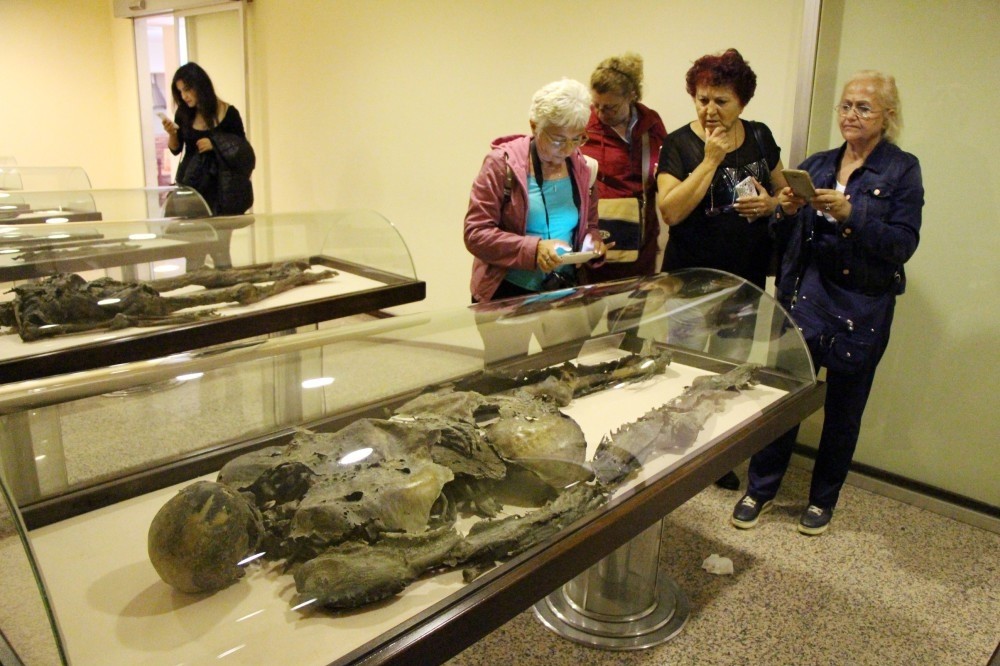 Having been used by numerous civilizations to preserve the body after death, the technique of mummification was also practiced in Anatolia. Although different from the one in ancient Egypt, embalming was also performed on rulers in certain Anatolian civilizations

In Farsi, the word for mummy is pitch. The word was then transferred to Arabic as "moumiyya," meaning a corpse stuffed with pitch. After that it was transferred to Greek, French (as "momie") and English (as "mummy"). The procedure that was carried out for the conservation of a corpse is called "tahnit" (embalming) in Turkish. This word derives from an Arabic word "hanut," a scented material put in the deceased person's hair and beard to retard decaying. It is made of sandalwood, caniphora and other plants.

In Islam, prolonging a corpse's decay is favorited. The corpse is dried properly after it is washed. The dead person is buried in a moistureless, dry and deep grave. If the soil is moist or loose like Istanbul's, it is better to bury the dead in a coffin. Materials such as fir and sandalwood that are used in the corpse's washing keep insects away and prolong rotting. Nevertheless, it is possible to explain how corpses remain unspoiled in Muslim countries with the region's soil and the climate around their burial sites. 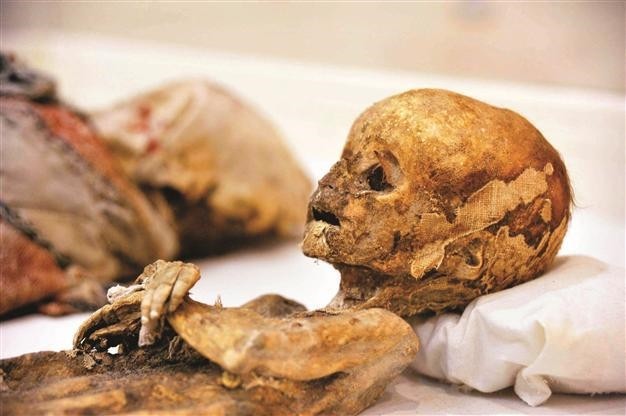 There is a tradition of embalming, especially with the corpses of prominent figures, among Turkic communities. The Huns, who believed in the afterlife, embalmed their dead according to their traditions and buried them in durable areas with their important personal belongings, weapons, and even horses. Unspoiled corpses belonging to the Seljuks who followed this tradition have been recently discovered. The Seljuks even founded a waqf (foundation) for mummification. The embalmed corpses found in Mengujek Ghazi's tomb in Kemah, Melik Ghazi's tomb in Kayseri, Aşıklı Baba Tomb in Kastamonu, Arab Baba Tomb in Harput, Sungur Bey Tomb in Niksar and Sahib Ata Tomb in Konya all belong to the Seljuk era. 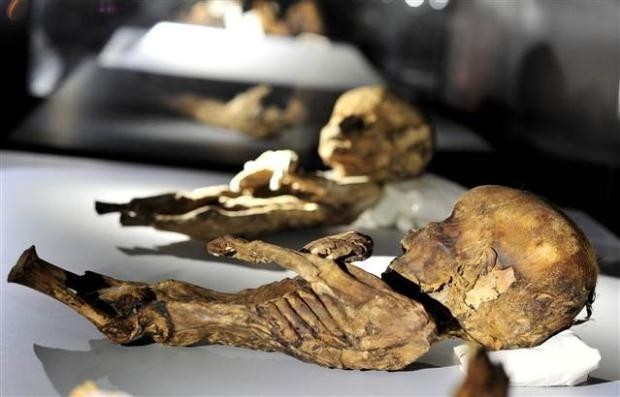 According to the ancient mummification method, which had its heyday in ancient Egypt, the internal organs of the deceased are entirely removed. The mummification done by the Turks had nothing to do with this method. However, there is little information about the mummification of Turks since this tradition was abandoned long ago.

For those who ever wondered whether or not the Turks removed the internal organs and buried them separately after embalming the corpse, the answer is that Islam does not allow corpses to be cut unless there is a legitimate reason. A hadith says, "Breaking the bone of a dead is as good as breaking the bone of a living."

FuneralIslam commands the burial of the deceased as soon as possible after the person passes away. However, there are cases when the burials of historical figures were delayed due to certain necessities and the dead were transferred to other places. The Byzantine historian Dukas narrated that the internal organs of the Ottoman Sultan Mehmed I, whose death was kept a secret for 40 days after he passed away in Edirne, were buried in Edirne, and his body, which was rubbed with resin, was later transferred to Bursa.

Venetian traveler Angiolello, on the other hand, reported that the internal organs of Shahzade Mustafa, the son of Ottoman Sultan Mehmed II, who passed away while he was away from the court, were removed and his body stuffed with honey and cooked barley and placed in a coffin covered with pitch. Based on his narrative, Mustafa's internal organs were placed in a box filled with salt after they were washed. 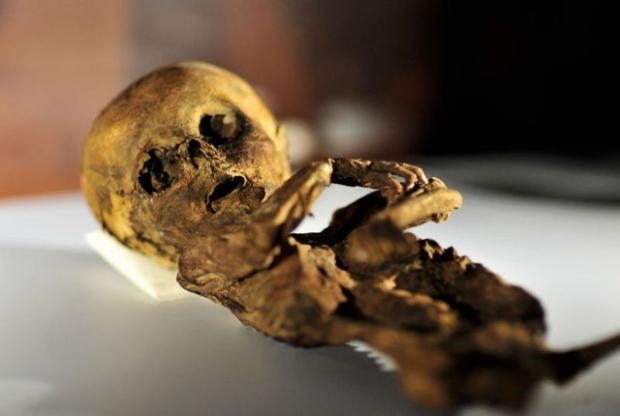 Ottoman Sultan Murad II's will said they wanted to be buried under the soil. Was this a reaction to the mummification tradition? In fact, the corpses were buried in crypts that were ventilated via small windows and grills and located below the ground floor in Seljuk and Ottoman tombs. Ottoman Sultan Mehmed II passed away in Gebze during a military campaign and his body was embalmed and had to be kept waiting for 15 days until Shahzade Bayezid arrived.

The Istanbul Archeological Museum is in possession of a mummy that belongs to King Tabnit of Phoenicia. There are also six other mummies dating back to the 14th century at the Amasya Museum. One of them belongs to Jamadar, who was the grandson of Ilkhanate governor Hulagu Khan and commissioner of Anatolia while another one belongs to İşbuğa Noya, the Ilkhanate khan of Amasya. The others belong to Seljuk vizier Pervane, his concubine and two children, a boy and a girl. The first two were taken from a tomb next to the Burmalı Minare Mosque and the others were discovered in the vault of the Fethiye Mosque in 1925. The Seljuk era embalmed corpses are spoiled when they are opened and make contact with the air. Although the embalmed body of Mengujek Ghazi in Kemah was well protected from 1110 to 1926, it has become spoiled as it was once put on display for a paying public.

Internal organ issueEvliya Çelebi said the internal organs of the Ottoman Sultan Suleiman the Magnificent, who passed away in Hungary during a military campaign, were buried in a high hill in Szigetvar, and his body was embalmed with musk, amber and salt. Historian Ali of Gelibolu wrote that the body of Sultan Suleiman the Magnificent was covered with a clean sheet soaked in wax, musk and amber and his internal organs were secretly buried right across from the Szigetvar. However, historian Selaniki who was present during the military campaign did not mention anything about the issue. The truth of the matter is that the body of Sultan Suleiman the Magnificent was buried in a temporary grave under his tent, just like his father Sultan Selim I, as historians such as Selaniki, Peçevi and Müneccimbaşı narrated.

A closed account kept in an archive shows how the Sultan Suleiman II's body, which was transferred to Istanbul from Edirne after his death on a summer day, was embalmed, and which materials were used during the process. It has been proven untrue that the sultans' internal organs used to be removed. What Dukas and Angielello said likens the process with that in antique. Having studying in Egypt, Hacı Pasha, a physician from the central Konya province, mentions a lot about the embalming process in his book "Shifa al-Askam," yet he does not write about whether the corpse's internal organs were removed.

It is important to note that embalming is different from mummification as it means applying chemical materials that avoid rotting. At times, the corpse is put in ice. When looking at relatively modern embalming techniques among Turkic communities, it appears that internal organs are not taken out, yet certain practices are applied to dry the corpse. This helps to avoid putrefying and the corpse is stored in a dry and airless place for years. Honey is one of the products used to protect the corpse. A criminal's beheaded face used to be carried in honey-haired bags.
Last Update: Nov 11, 2016 1:45 am
RELATED TOPICS