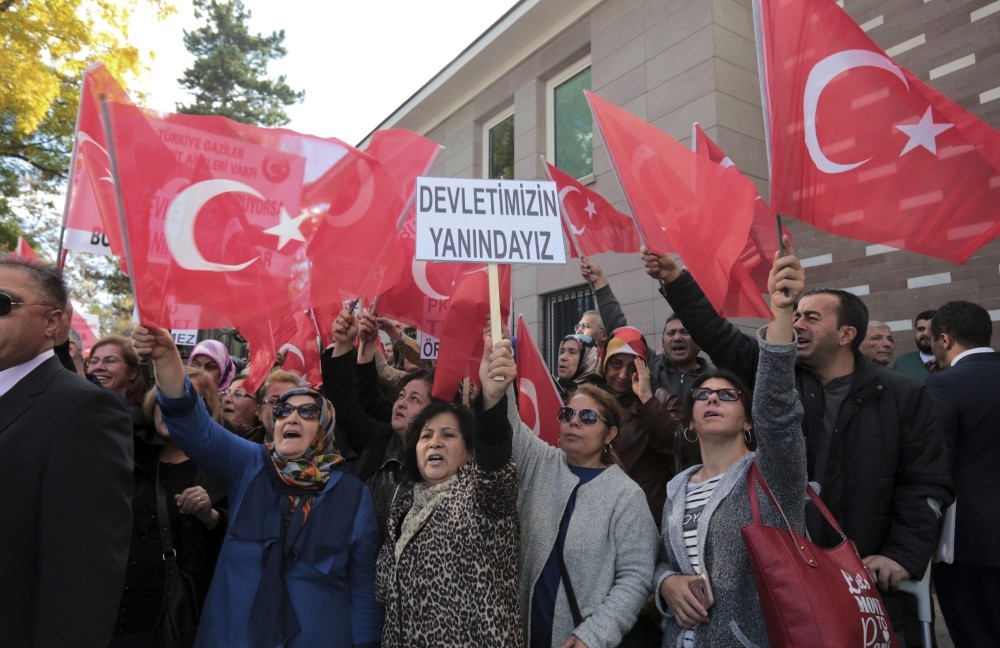 Turkish citizens staged a demonstration outside the French embassy in Ankara to protest France's support for PKK. The placard reads: ,We are with our State.,
by Jane Louise Kandur Nov 19, 2016 12:00 am

Brexit has set the bar. Perhaps a bar that one has to stoop to go under, rather than jump over, but a bar all the same. Now when a country, a state or an institution has 'had enough,' discussions begin about holding a referendum on whether to 'exit' the said institution, organization or federation or not. In the past year, California has been talking about having a referendum on whether they should stay a part of the U.S. More recently, there is talk of Turkey holding a referendum about whether the people still want to join Europe or not

Referenda are becoming more and more popular. In California, the history of referenda (or ballot proposals) is one that goes back over 100 years. There have been over 350 ballot proposals in the last century.

The process that is now known as "Calexit" actually began long before the Nov. 8 election. Before the election the "Yes California" movement was slow, with much less than 10,000 Facebook likes and only 650 Twitter followers. But today there are over 27,000 likes on Facebook and 15,000 followers on Twitter.

Moreover, last February a Twitter poll showed that 41 percent of those polled (around 9,000 people) wanted independence. The "Yes California Independence Campaign" hopes to hold a referendum in 2018; the result will bring the state closer to actually seceding from the union.

The very words "seceding from the union" are enough to strike a strong emotion in the heart of every American, be it terror, joy, anger or hope. It all depends which side of the Mason-Dixon Line you live; "secession" brings to mind American history lessons and the bloody, brutal civil war. This, one would think, would be enough to prevent the idea of secession. But history seems to be condemned to repeat itself. The human condition is one of eternal hope that this time it will all be different.

Turkey has made over the past 15 years genuine progress, not funded by any other nation or union. And this is what is getting the European's goat. Turkey does not need Europe.

Yet no state has been able to secede since the American Civil War, although it is possible in theory. In 1878 the Supreme Court ruled that no state can secede unless it revolts, or all other states agree. But even if one of these conditions is fulfilled, all states are perpetually contracted to the United States, meaning that there is actually no legal way to leave.

But like Brexit, a Calexit would open a can of worms for the new state. What would their relationship with Mexico and Canada be? Would other states, like Texas (which already thinks it is independent) also secede, creating a number of mini countries in the west and southwest?

But there is one country which looks close to deciding that this time will be different. Turkey is determined that they won't be fooled again.

The European Union accession carrot that has been held out to Turkey for more than 50 years has shriveled and dried up. It is rotten at the core and the stench is beginning to make Turks very uncomfortable.

When I came to Turkey in the early 1990s, it seemed that being part of the European Union was a distant dream. It was such an enticing and tantalizing dream that it dominated my thoughts. As I waded through knee deep mud, I could only think "I hope Turkey gets into Europe." On the rare days when there was electricity, as I struggled to pour buckets of water into the washing machine to get it to work (there were hardly any days in which there was electricity and running water together) I could only think, "Ah, if only Turkey could part of Europe." As I turned my children away from parks, dashing their hopes because the parks were full of rubbish and broken bottles, as we made our way back home over broken, uneven pavement (or through mud) I could only think "Maybe one day Turkey will be part of Europe." As I scraped the bottom of the instant coffee jar, knowing that I would have to wait for the next visitor from Europe to get more, I could only think, "I hope the talks go well and Turkey will be part of Europe soon." As I waited in the enormous queue to see the doctor, knowing that I would be shouted at and put down when I did get in to see him/her, I thought, "If only Turkey could attain European standards!"

There were so many situations in which I thought, "Ah, if only.." But come 2002 things started to change... Slowly but gradually. By 2008 most people in Turkey began to realize that the things they wanted from Europe, a better infrastructure, better social services, better pay, better living standards, more rights, more freedom, were for the most part now available in Turkey.

And after 2009, when the entire world was hit by the global crisis, things in Turkey continued to get better; all the while, the rest of the world slowly sunk into decline. It has been a gradual decline, but the increased number of homeless, the closed factories, the increasingly dirty streets, all these factors point to a real drop in living standards. And Turkish people began to say, "Well, maybe we don't need Europe."

Every time the Europeans took the carrot a little bit further away, saying, "For this reason or that, Turkey isn't ready," every time an Eastern European country with little or no infrastructure, no history of freedoms and a failing economy was embraced by the EU, every single time this happened the Turks took a step back. Imperceptible perhaps, but there was a definite distancing.

Long before Mevlüt Çavuşoğlu was foreign minister, there has been a consensus among the government that any offer from Europe to join would first be put to the people. The people would be asked, "Do you want to join Europe?" and whatever they said would go.

As Greece sank into oblivion, as Portugal skidded downhill, Turks started to make up their mind. "Let's see where the talks will get us, but let's be very cautious about joining this failing union." Turkey and Turks do not want to be the only healthy members of a very sick Europe.

So when earlier this week foreign ministers from the European Union met to discuss putting a halt to membership talks for Turkey and perhaps imposing sanctions, they should not have been surprised at the strong reaction this generated.

President Recep Tayyip Erdoğan merely expressed what the Turks were thinking and what they already knew. Europe has been toying with Turkey for decades. Turks are aware of this, and they are aware of the constant double standards in the negotiations. When the club you are asked to join is in severe decline, but still insists that you jump through hoops to convince them that you should be let in, the only reasonable thing to do is to consider halting the process.

President Erdoğan put in words the notion that is in every Turk's mind: Europe refuses to accept Turkey due to the fact that it is a Muslim majority country. Add to this the fact that Europe has failed to keep its promises about Syrian refugees.

The president said: "The Turkish people make their own decision. They will cut their own umbilical cord. First keep your promises. First remove representatives of terror organizations from the EU Parliament. It is not enough to merely declare that the PKK is a terrorist organization. First let us see you remove their representatives."

Finally, Erdoğan says: "Let's wait until the end of the year and then go to the people. Let's go to the people since they will make the final call. Even Britain went to the people. Britain said, 'Let's exit,' and they left."Brexit is now a trend. When a group of people aren't happy with a union, they can hold a referendum to see if they want to leave. Whether California is actually free to leave, only time will tell.

But Turkey is free to leave Europe. Freer than California and freer than the U.K. As it has never been invited in, it is very easy for Turkey to walk away. And perhaps the time has come to call the EU's bluff. 53 years is too long to be kept waiting at the door. All the feigned shock and horror on the part of Europeans will not change the fact that this is a club that is not really worth joining. Turkey has more to lose than to gain. All the progress Turkey has made over the past 15 years genuine progress, not funded by any other nation or union. And this is what is getting the European's goat. Turkey does not need Europe.
Last Update: Nov 19, 2016 1:56 am
RELATED TOPICS