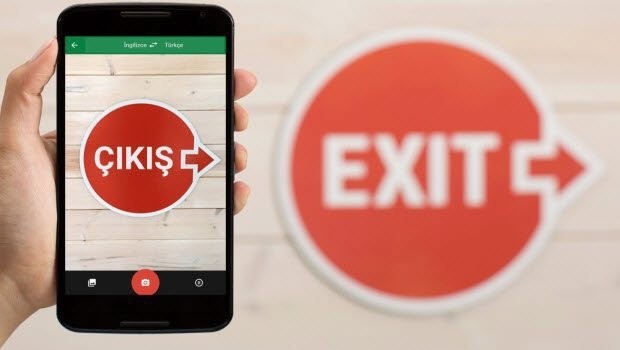 Google's widely used translation service is now more fluent in Turkish and seven other languages thanks to advanced software described as a 'neural machine' tool. The company's biggest leap has already inflamed discussions in translator groups. Some say it is overrated, as the need for translators will remain

As we progress towards the 21st century, we continuously face issues related to machinery and robots that have begun to affect our daily lives. Will they replace us? Or, will they help us in whatever line of work we're involved in? Ten years after the Internet was invented, Google Translate dropped a bomb on the translation world. Will neural translation replace normal translation? Will all translators soon be out of a job? Well, the answer is a definite no, but let's take a look at the progress in neural translation and what it may change in the near future.

Google Translate is not a new concept. On the contrary, it's been in our lives for the past 10 years or so. Especially in English-Turkish terms, it has been the subject of many jokes and derogatory comments, such as "Did someone translate it by Google Translate," which was an insult a month ago, but now with its recent update, it has awed many of us. Now, it is actually "usable" as it has started using neural machine translation.

But what does that mean for mankind?

Neural, as we all know means related to nerves. Despite its futuristic connotations, neural technology is not something unheard of. It just means that now Google's server analyzes sentences as a whole unlike its previous version that analyzed texts piece by piece. The concept has a wider scope, including broad search capabilities and search engines based on context provided by the user, making it more like a human translator's work.

Now, if the text is very simplistic, like an academic article, you are likely to get smoother and easier to understand texts. So how did Google achieve this?

First of all, this new system is based on data that live translators have already uploaded into the system. So, unlike before, first there is a massive amount of data uploaded, and with the new addition of a prediction technique based on previous searches, the results are much more reliable than before. The processors are modeled after the network of neurotransmitters in the human brain. The newly advanced, calibrated processors analyze certain cues and make comparisons to more accurately translate texts.

Google Translate currently supports eight languages: English, French, German, Spanish, Portuguese, Chinese, Japanese, Korean and Turkish. Translation makes up 35 percent of all Google searches and Google plans to expand its services to include 103 languages in the future. The plan is to implement all remaining forms of communication that you can find in Google Translate. As a hobbyist linguist, I am quite excited by this news and hope that it begins to include other languages very soon.

While it is capable of translating accurate texts, when it comes to idiomatic expressions or casual language, it is still of no use. Along with ignoring anything it doesn't comprehend, its database doesn't provide proper translation when it comes to literary, poetic or everyday language. As language changes every day, it may be very hard for Google to catch up, and this "update" is probably very far from what is needed to knock human translators out of their professions. While we may benefit from robots or automatic updates more and more in our lives, language - something we humans need in our lives - is hardly to become robotic, save for maybe a few label translations that may keep us from drinking or eating something we wouldn't prefer.

So what does the translation world say?

Steve O'Farrell of Pace Training and Consultancy, Corporate Training and Translation Services, also engaged in Teacher Training and Educational Consultancy, says in a statement: "Google Translate is a wonderful on-the-spot tool for everyday use for things such as reading the information on a food or drink label. The camera function on the mobile app is excellent. It is also useful for getting a basic grasp of the content in a longer text. However, in terms of final output, even the new, improved edition of Google Translate has difficulties. Firstly, most texts contain specialized information in one capacity or another, and this is often sparsely covered. Also, when it comes to proper nouns in different languages, the app often tries to translate these, leading to confusion. For professional work, it's vital that the output appears as though it were written by a native speaker of the target language. The flow of the language is a key part of this, and this is an aspect that machine translation still has not mastered."

Umut Özel, an expert on technical and clinical translation, notes that she finds the latest discussions and the panic - yes panic, as many thought Google Translate actually worked - a bit "overrated." She states that translation includes adaptation to the target language and in addition, localization. Yet, a machine would not have a sense of humor or interpret anything in the source language and adopt it to the target language's culture. "While Google Translate has not yet captured a corner of the market, for me, what would damage the sector is not neural or machine translations, but the price-cutting techniques that have been ongoing for a long while in the sector," Özel said.

"The only product by Google which has not met the quality expectations when compared to other Google products, Google Translate is not back on the agenda with its new algorithm development. We, as the largest translators' portal in social media in Turkey, also discussed this issue. Google Translate, which was a subject of many caricatures at first, now has impressed many with its updated algorithm. While, it is certain that this is something that will profoundly affect us, it is out of the question for the whole profession of translating to be wiped out of the world or just be about literary translations. We also have set in motion works with our umbrella organization, TURÇEF, to prevent any unfair treatment in that sense," says Cem Şensoy, the founder of "Çevirmen Dayanışma Grubu" (Translators' Solidarity Group), a soon-to-be legally established association.

"We are not able to tell any machine to build a website with our preferred embodiments as it would be confounding to consider programming languages apart from any other actual language. We use the same old constitutions that some founders established long ago instead of Three Laws of Robotics," said Burak Aydın, a medical and clinical translator with 10 years' experience. "I only see vending machines in bar bathrooms and grocery stores yet still require staff to engage customers with self-checkout systems. I use Google as an extension of my body with all its products from news to metric unit conversions, so the better it develops the better I benefit. I am sure that you do not even know that you can just triple click to select all in the Google search box as well as you can omit some search results just using '«-»' before the terms you would like to exclude. If the world changes, we will realize it somehow. This recent Google Translate fanfare is just a multinational company PR activity to let people believe that the end of history comes."
RELATED TOPICS